BOOM.
It's back guys.
First 7 textures done.
Tell me what do you think.
Does the world still need this?

They work fine for me Even logged out on Internet Exporer. Click in the image, link will open the image in a new tab so you will see them

I think you should work on this! I would probably use this pack over all the others!
I

Sad as I am being that I'm on Mobile and get nothing fun on Terraria (Sob!!), I love your Oil Painting version.

@Ingenious thanks a lot! I am playing on mobile too, hahah. Though, only offline :/ (my smartphone: "MyPhone Cube" [4Gb version] has a weird bug when trying to connect games. It crashes when I want to join or someone wants to join)

I am eliminating the sharp edges. I don't think this texture pack looks beatiful. But there were too man thread on Terraria Online with unfinished HD Textures packs ... why? Because their owners were bored of working on them. So far my texture pack became very popular outside terraria online which shocks me! It even hit the youtube! Wow? Well, yeah! A big WOW! At least for me Not to mention massive amounts of reuploads on different websites (mostly russian-like/looking ones) I am going to continue working on this. When I find a way to make it look better I will make it look better. But for now I am going to stick around with what I've got so far. I am not spending long hours on details about single texture ... What I do is rather a quick re-filtering on a massive scale. I plan on doing other texture packs with simple modifications aswell. So yeah, I will work on this whenever there actually IS a possibility to make this look better.

Woah! No way! Is it actually back?

_Mish said:
Woah! No way! Is it actually back?
Click to expand...

It is, however - I still have other projects under going so it will take some time. Not to mention how many image files terraria has right now. This is way more than ever amd my laptop is not an Ace-1 performance gear compared to any other every-day laptop. But yes, it is coming back and I hope to finish it before 1.3 will be released.

Ah, I'm still working on it. Few sprites a day. I don't want to do too much because then I would get bored of it and tired making all those thousands of files. Mass editing? No way. That's how my feels died for this texturepack last time.. Meanwhile I'm working on Mecha Infinity and Pangeo Chronicles sprites. Check my sprites thread if you wanna see them.

I think you'll have to work more than just applying an effect on the sprites :/ if you use the effects listed above, you're losing pixels (i.e the small buttons on the top of the gun). So i thinks that pixel by pixel editing is necessary.

I've started to help you a long time ago, here is what I made : http://puu.sh/imKft.zip
The only problem is that is so much work to "smooth" this sprites pixel by pixel.

Looks like this thread died a long time ago.

Yep, with all due respect, I don't think it had anything going for it

The single pixels isolated around dark pixels appear to disappear with the filtered sprites. 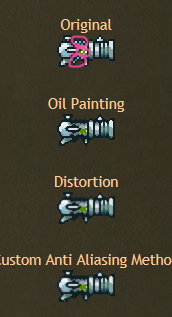 This is why filters simply don't work.

A more intelligent filter should work. I saw one which did like the oïl thing but kept 100% of the details. lost the link though :|

So, would this increase performance at all, or is it just to make the game easier on the eyes?
M