i'm guessing towards the middle or end of the month

They are usually towards the end of the month.

Yoo, just got the update for Terraria: Otherworld soundtrack on Steam.

I don't yet have a good headphone to test my dac and amp with, so my gaming headset will limit this, but so far with it:

Before analyzing, I decided to do a blind test. So I straight up played them in a standard way, no bells and whistles, from Windows MPC-HC to ADI-2 DAC + THX 789 (with a headset not doing them justice tho).

I played mp3 just for reference again, but it sounded better than I recalled it despite still being on mp3, which was strange because I recalled it being difficult to enjoy that much.
I also found that the mp3 and wav files were very close in sound.

I wasn't sure if it was just me, so I had to check.
I checked, and sure enough they updated the mp3 from being 128 kbps to 320, which is high quality for mp3.
They also might have made it MP2, which a quick google says is apparently better for higher bitrates at cost of joint stereo issues, whereas mp3 was not that great above a certain rate.

More importantly, the .wav files are not cutoff at 15khz but go up to 22khz, and appear to be lossless?

Bit rate of a stereo CD audio (at 44.1Khz/16bit) as a FLAC encoded file is 1411 kbps from what I understand (I don't know the numbers well myself), and that lines up with the file.
This means that for CD quality, this should be about as good as it gets. You won't get much better unless the files are exported in higher formats than CD quality or the mastering changes, and that assumes that the source is of higher quality to begin with, which is not always the case.

Thank you to whoever had a hand in this, both to Relogic and the composers!

I don't have the old files anymore due to them being updated, so I'll have to use my old pic posted in this thread.

Here are the comparisons:


Old, no-longer-available version of the mp3: 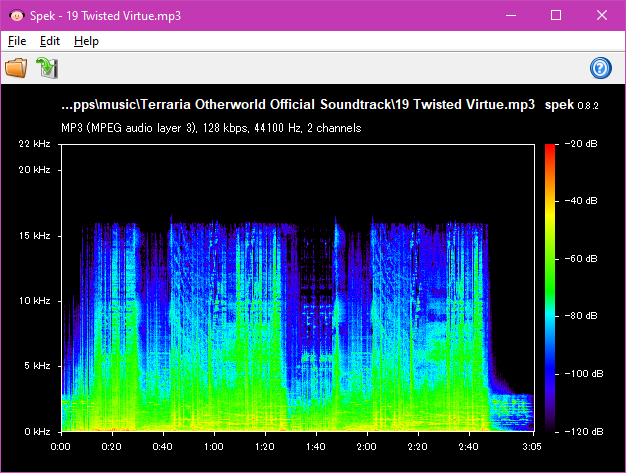 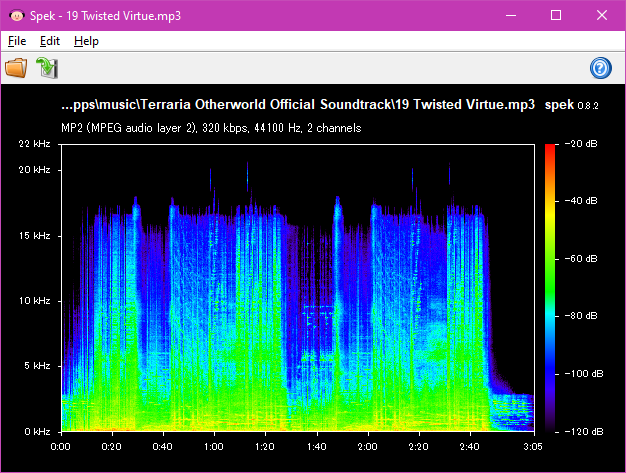 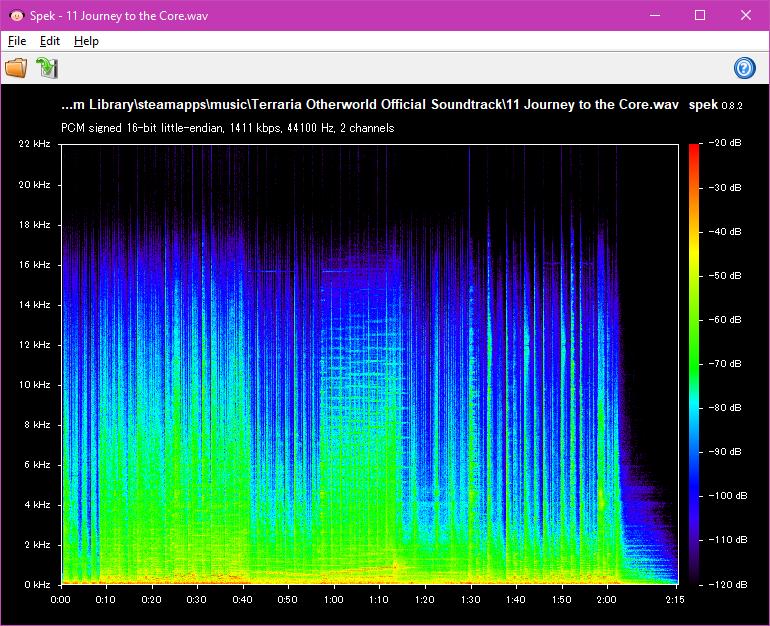 If the spoilers don't work, here's an album: https://imgur.com/a/eIQLiCQ

Loki said:
PW had stated wayyyyyyy back long ago in the beforetimes that 4 Player Splitscreen just "nopes" the Switch almost instantly. Even as it is, with 2 players, the system has struggles.
Click to expand...

Frees up space on switch by undownloading terraria

Diablonar said:
Thank you to whoever had a hand in this, both to Relogic and the composers!
Click to expand...

Glad to help improve the experience.

Just put in an extended credits track from James Hannigan this morning, along with album cover appended metadata to all MP3s.


24garnearmb said:
Frees up space on switch by undownloading terraria
Click to expand...

Sorry to hear that, but nothing can be done in that regard under the current situation. Trying to see what can be done for that two player though....

Greybrynn said:
They have a community calamder to show when it’s posted(probably not exact) but it said July 24th
Click to expand...

so its on my birthday then

Generating_Username said:
so its on my birthday then
Click to expand...

Huh well cool, it’s the day before my birthday, so yeah.

Greybrynn said:
Huh well cool, it’s the day before my birthday, so yeah.
Click to expand...

This is getting off topic soo let’s stop

Greybrynn said:
This is getting off topic soo let’s stop
Click to expand...

Can you add thing like adventurer spark from tremor mod?

Timofey7331 said:
Also can you improve the thrower class
Click to expand...

We shall not speak of that class unless we talk thorium

There is no thrower class in Ba Sing Se.

The_Artic_Shadow said:
i want to play journey mode so much so i can finally stop grinding for 5 hours for something i had already
Click to expand...

Oh yes I feel the same way, I want journey mode for that, I also want it so I don’t have to take hours chopping down trees in the first few minutes of playing....