I am very glad that Terraria won

Congratulations to the team! You've done an amazing job with Terraria and this award is well deserved!

Woah! Congrats, man! I am glad that Terraria wins 2021 Labor of Love award. Good job there at Re-Logic!

this is long overdue, i still feel like this award was stolen from terraria last time.

anyway, it's nice to see this award finally given to a game and development team that TRULY earned it.

to this day, terraria remains one of my top favorite games of all time, so thanks again for everything re-logic has done.

Took them long enough...
fr tho, how many times did we get a chance at giving this game the award it deserved?

Congratulations on the award, kinda late to say this. Terraria has been a game that I’ve enjoyed since the Xbox 360 era. After purchasing it, I quickly fell in love with it and played hours upon hours. After getting the Xbox One, I haven’t played much on the Xbox One, due to weird controls and didn’t knew how to change them, but still played on the Xbox 360 time to time. Around in November 2021, I’ve bought Terraria again but as the pc version, and playing hours upon hours once again. I’m loving all the new updates compared to when I have first ever played. I’m proud that Terraria has won this award, as it’s been due for all the commitment and effort going into this game and the community.

Congratulations, this is well deserved. I bought this game in late 2011 for 5$ on sale and already felt the 1.1 version was well worth every penny but the sheer amount of quality content that has been added since then at no extra cost blows my mind. Thank you for the years of entertainment Re-Logic

Finally! After 10 years of updates, couldn't have been a better time for Terraria to win!
M

prosans said:
it earned it i think it has surpassed minecraft players with awards
Click to expand...

Minecraft wasn't an option because it's not on Steam. I love both games pretty much equally and Minecraft also keeps putting out high quality free updates and the devs are still passionate about the game even if the studio is owned by a big company.
D

I don’t really use this account anymore but I just wanted to be one of the many people to say congratulations to winning this award. You definitely deserve recognition for the level of dedication and care you put into Terraria.

What else can we say but wow. Just wow, Terrarians. You are all simply amazing and it is so humbling to finally be able to pull down the win here - and against rather stiff competition. We know it is 100% due to your loyal support of our team and game over the years, and it is truly a pleasure to be able to work on an amazing game such as Terraria and then to share it with all of you.

Terraria truly is a Labor of Love for our team - like a family member to us - and to see it gain recognition such as this means more than we can say. From the bottom of our hearts, thank you so much to each and every fan out there and for each and every vote. It has been and remains our honor to deliver the Terraria experience to you. We look forward to an even brighter future ahead - with Steam Deck optimizations, content parity for all platforms, and (hopefully, fingers crossed!) crossplay later this year. Journey's End may have arrived, but it sure feels like just the beginning to us.

Beyond that, well, time will tell as they say, right?

Check out all of the 2021 Steam Awards Winners via the link below!

Great to see Terraria is still kicking strong, congrats on the reward! Though I very much feel that the other games deserve some appreciation too! I recently got into playing No Man's Sky and I seriously didn't expect to get into it!

Good job Terraria Devs!!! I know your journey with Terraria is going to end soon (maybe) but I hope you receive many more awards like this! 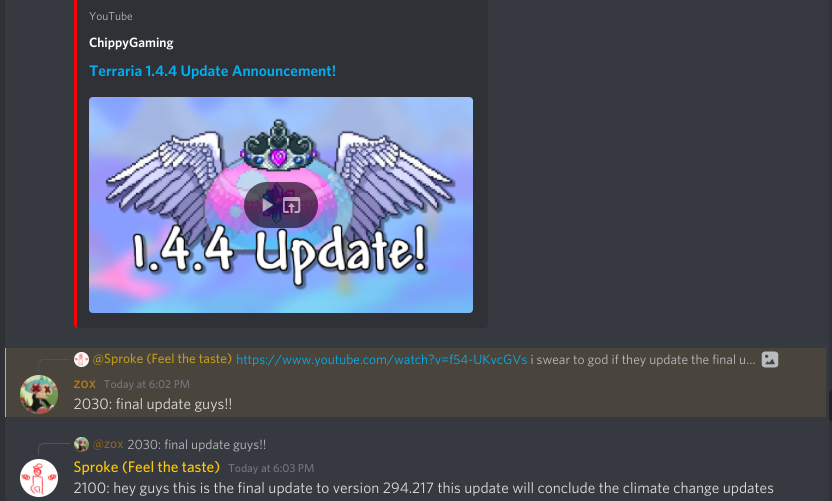