Official The End of the Journey - The Beginning for Terraria: Journey's End Out Now!

This update has been a labor of love, tirelessly worked on by our team over a good while, and we truly feel that it brings Terraria to the next level, to a place where the core game can finally be called "complete". From new ways to play the game to over 1000 new items to find and craft to new bosses to challenge and even a full-pass review of all content of the game for balance, graphic quality, and mechanics - truly, Journey's End has something for everyone. We cannot wait to see your reactions as you dive in to all that this update has to offer, and we hope that you thoroughly enjoy our gift to you. It has been an amazing journey indeed... but we truly feel that this end is really just a new beginning for the amazing world of Terraria.

So, what awaits you in Journey's End? In case you missed our advance Terraria: Journey's End Changelog post last Thursday, we have linked it below for your reading pleasure. Also located in today's post are where and how to report bugs as well as other important information that you may find interesting.


As a reminder, Mac/Linux optimizations, additional Localization, and the Vanity Contest winners will be added in a post-launch update.

THERE & BACK AGAIN: A SUMMARY OF TERRARIA: JOURNEY'S END (OFFICIAL CHANGELOG)
(Click the text above to head over and read!)

TERRARIA: JOURNEY'S END FAQ/GUIDE CENTRAL
(Click the text above to answer all of your burning questions!)

Want to see what all Terraria Golf has to offer? Check out the link below to download one (or all) of three killer golf maps hand-crafted by our beta testers - including courses created by some of the most talented builders across the Terraria community.

Having an issue? Found a nasty bug that you want us to squash? We are here for you!

While the team will be searching far and wide all over the Community, the best place to report bugs is right here on TCF!

To be sure that we can find and fix your Terraria 1.4 bugs as quickly as possible, be sure to include the following information:

Also, the more details that you can provide about your issue, how it occurred, etc. the better!

While you are here, do you like balance discussion? We've made a lot of changes in this update, and we are considering more changes in the upcoming hotfix updates. If you have some thoughts on balance changes, feel free to check out the Official Balance/Feedback Thread!

TERRARIA: JOURNEY'S END COVER ART WALLPAPERS - A SPECIAL GIFT FROM RE-LOGIC TO YOU!

The Re-Logic Team is thrilled to be able to share our amazing Journey's End cover art - courtesy of our very own @Jimmarn! Our team feels like this epic panorama really captures how we - and you, our community - feel with this release finally being out in the wild. A time to reflect on all that has been accomplished as much as a time to prepare for what is next!

Jim has created three versions of this art for everyone to enjoy (Day - Night - Sunset). Each of these are now available for download on the Media page of Terraria.org, via the link below. Alternatively, you can click the cover art below to be whisked away to the download page so that you can grab the wallpaper(s) that you want and then proudly display Journey's End on your PC or Mobile Device! 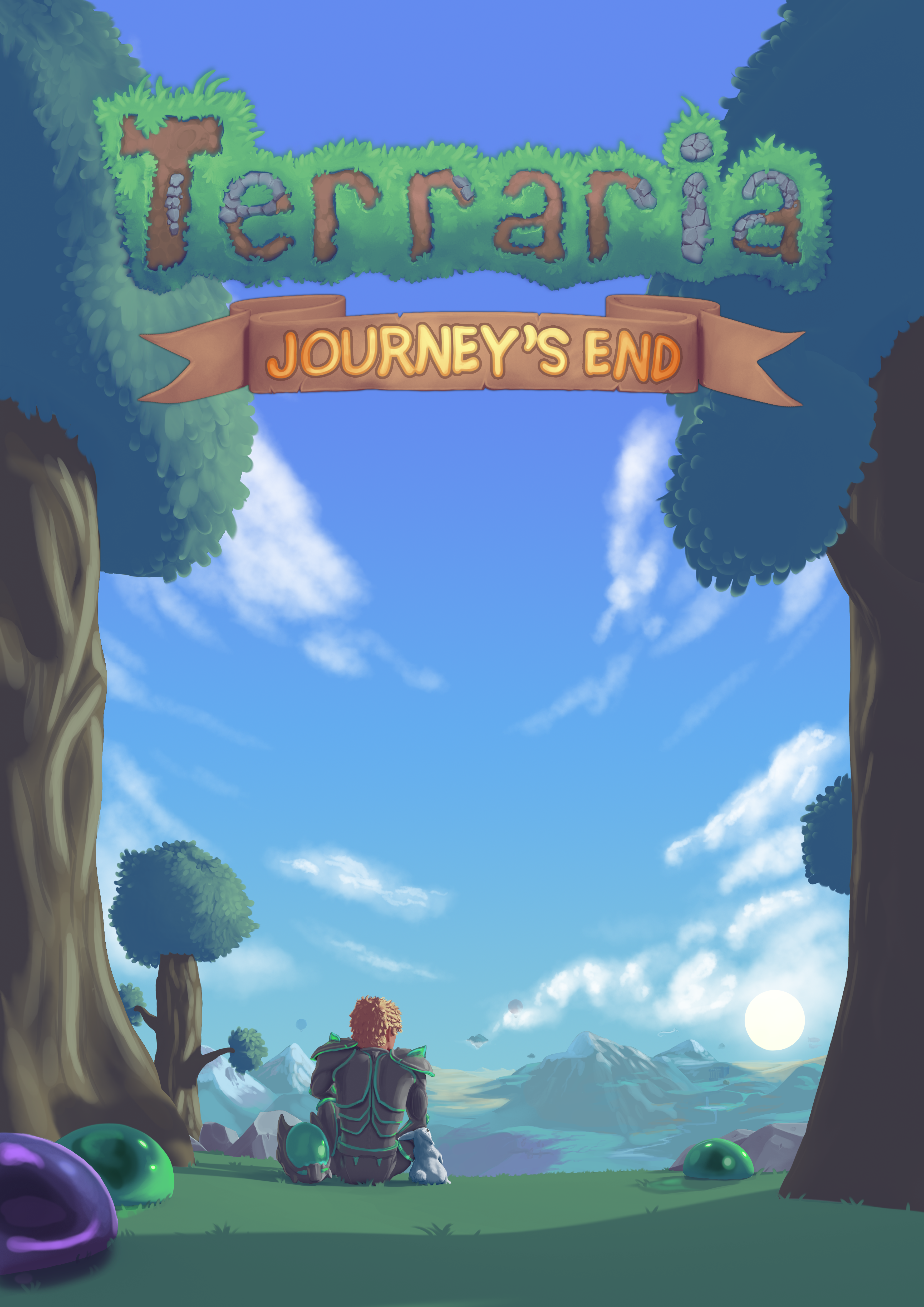 Edit:. Just to tell how much I loved It.

Well done for all the hard work on the update! It's amazing!
N

This update was absolutely pog! Thank you to the entire team for all the work you put into it!
Last edited: May 18, 2020

Will there be a few minor updates?
N

Absolutely fantastic update, thanks for making this guys.
V

how do we get the vanity contest winners, i've done everything i can think to get them!

This update is one of the best things that I've ever seen. I love everything added and changed, because Terraria is one of my favorite games of all time but always felt like that it needed a little something to make everything better. The music was added where it was needed, like an underground and night jungle theme (because hearing the Jungle theme everywhere when going in it would make you go crazy from it looping for hours), the pylon system, making you be creative with new builds mid playthrough, and so many other things. I love needing to keep track of NPC happiness so I can buy a pylon, and have no need for making a teleporting network late into hardmode. I love the balancing changes, making so many more items actually relevant. I love the new graphical changes that make the environment even more beautiful and immersive. And I ABSOLUTELY LOVE the new Master mode. Hard but fair challenges are one thing that I love in games, and while not even being close to beating the game in master mode, it's a satisfying and hilarious experience. Enemies dealing tons of damage, traps killing you in one hit, and actually needing to be careful with all of your movements and weapon usage with lots of punishment for messing up. It was hilarious when it was a windy day, and I just died in one hit from an Angry Dandelion because I wasn't careful. That was a really nice wake-up call, giving me the message, "You're in Terraria, dude. It's even harder now, anything can kill you."

Expert Mode was fantastic, but Master Mode is perfect for making you constantly be on your toes with rewards and satisfaction in the end. Not just that, I've always wanted to get good with building and I have been trying since 1.3, and now it just feels better because of the NPC happiness. Fishing isn't completely broken, and the meteor set doesn't snap the game in two, so my friends can progress with me instead of trying to sequence break and I always need to try to get everything, while being completely free of what I want.

Journey's End wasn't even completely needed, but this is the best send off to the game. It includes so many internet culture references, makes the experience so much more enjoyable, and makes the game so much better to play for veterans with thousands of hours, people that just came back to it after years, and people completely new to the game.

The update was a love letter to the fans, with the game itself forever being a love letter to the gaming community. I've been playing ever since the game became free for Xbox Live Gold back in April of 2015. I love this, and thank you, Re-Logic. You deserve all of the praise and success from this game, one of the best of all time.

All in all, this is an absolutely amazing update that was definitely worth the wait. I'm glad that you all made it the best update yet.


Vall said:
how do we get the vanity contest winners, i've done everything i can think to get them!
Click to expand...

I don't believe they've been implemented yet.

im SOOOO excited for it to come on console!

NebularZ said:
The hype was SO REAL the forums crashed for almost two days
Click to expand...

Yeah; that's definitely an unpreceeded level of hype I haven't seen for quite a while. I'm glad that the forums are back, though.

Great patch but damn....... and I say this as one of the biggest advocates of the teams decisions/choices.
The obvious preferential treatment you gave to melee/solar is astounding.
Take every other end game playstyle and throw it in the trash can.

I was pretty disappointed that the mage weapon offerings are a borderline joke (though they look nice)
All the other classes got at least a cool sidegrade.

Melee's new toyis so stupid that it immediately benched all their old weapons and every other class. Seriously guys. If you halved its damage it would still be better than meowmere. What were you thinking?

Inner Tube and Step Stool... brilliant. I was laughing a lot when I found them.
Update is awesome.

You made fantastic game!

Aright Everyone get on the Hype Train and lets get some epic loots!

the update is not good...….. its the best update I have seen in any game and it makes me sad to see this amazing game stop being worked on but if we still have the youtubers like chippy, gameraiders101, etc. also with the modders…. like me,the people who made calamity, and the people who made thorium, and all the other amazing modders..... I don't think terraria will not end for a far long time 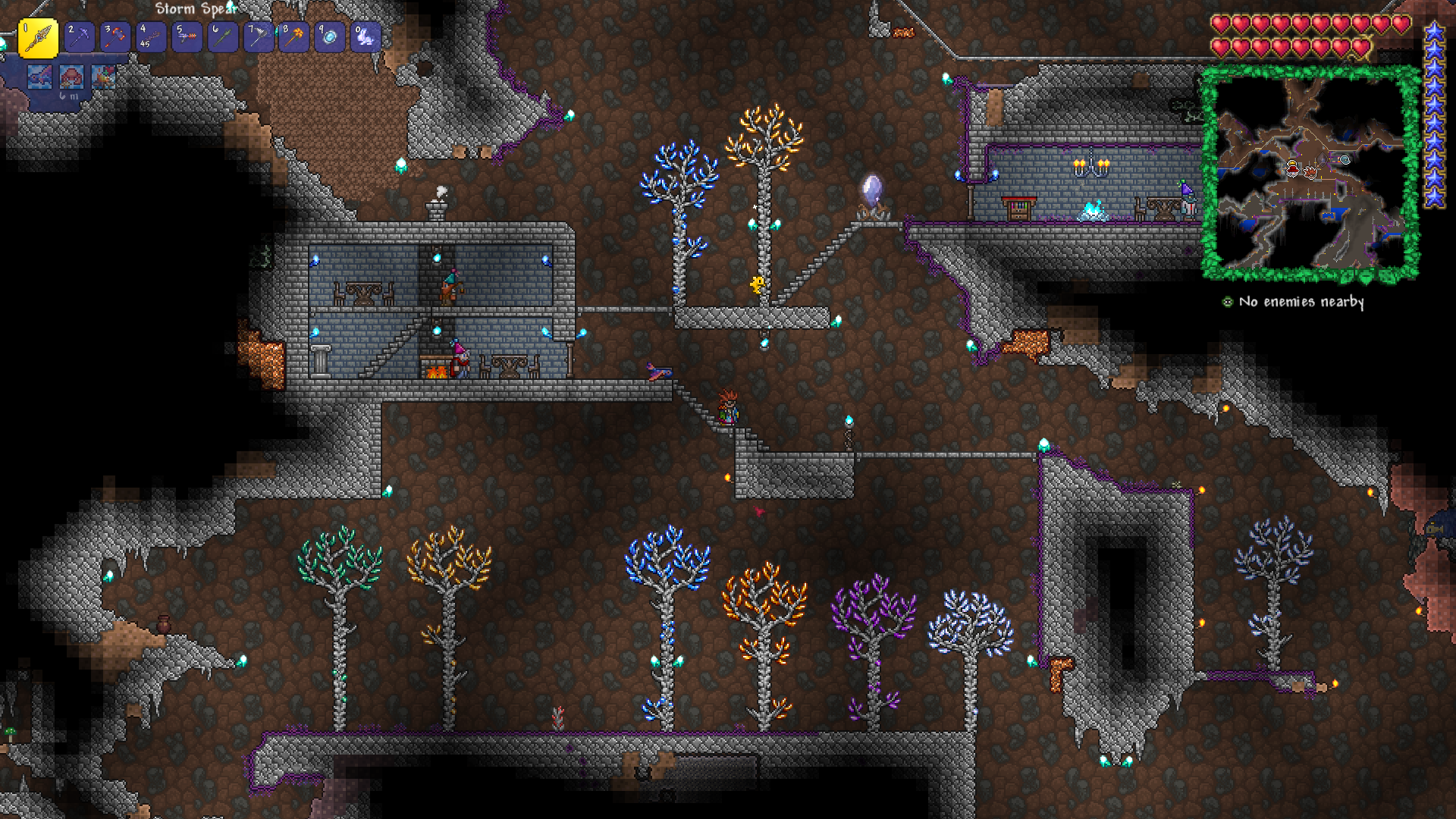 Any idea why Ruby one is the naughty one?

It was planted as first...
T

So the forum is FINALLY back up. I guess the 1.4 hype was far too much for this forum to handle. There was so much hype around 1.4 that Terraria was in the top five trends on Twitter. Now that's nuts. We should expect a large number of guests for sometime and an influx of new users. I just hope the forum won't be overloaded again.

Hey. As it is one of the last things you are implementing. Just like as Announcement Box I would recommend implementing 'enemies sensor'.
Wiring associated item which is ON/OFF if no enemies are in 30x30+ radio. That would implement a lot of nice wiring stuff for people in normal maps
and a fortune for adventure map creators. As far as I know, there is no such indicator implemented yet.
You must log in or register to reply here.
Share:
Facebook Twitter Reddit Pinterest Tumblr WhatsApp Email Share Link
Top Bottom