The Land of the Dead (Text Adventure)

Alright, i'm done sitting around keeping people waiting, i'm sorry, but i cannot do this anymore, and i'm sure people are sick of me saying this.
The land of the Dead, is dead... for so many reasons. most of which i've already mentioned before, but a quick highlight real:
General unmotivation and writers block.
Players who have plot importance **NEVER** updating.
The Terraria Forums giving me endless problems.
Lack of time.
Document technical problems
General loss of interest

So, i'm not going to sit around and keep saying i'll do it eventually, i most likely won't, and in general i just don't enjoy it, i enjoyed past TA because of how much more simpler they were, WITH a story still.. so i'll go ahead and announce it here and on the forums, and i'll write up a document soon enough so you guys can see the planned out story that was never meant to be...

We sadly did not get a chance to see my favorite villains i''ve ever made: Judas and Rhylyth, but such as fate...
I'm sorry to have constantly let you guys down, and disappoint.

So what now? Well, for those who care, i'll still be in the discord server, doing monster reviews, but as far as TAs go, here is the deal: I'll probably do the simpler Discord TA at some point, mostlikely next month maybe? maybe not? who knows.
But as for main TAs? i'm taking a break from them, Land of the Dead suffered from having WAY too much, and i also realized that several story elements i was writing myself into corners, it's... not good. but i am still proud of what i made, and i really hope you all had fun with me, i most likely will do another "mainline" text adventure in the future, but it will NOT be as complex as LOTD, and will mostlikely be an extremely long time before i do another main one.

Hey, that's a-okay. You did your best to make this work. Sometimes

just happens. I look forward to that doc.

And while I did not get to play very much of this game, what I did experience was some of the best online RP I've ever done.

I did have fun and still care while it was active, can't wait to see the document on how the story would have played out. I'm sorry that this whole thing didn't work out. If you don't mind me asking, why did you have so little time? 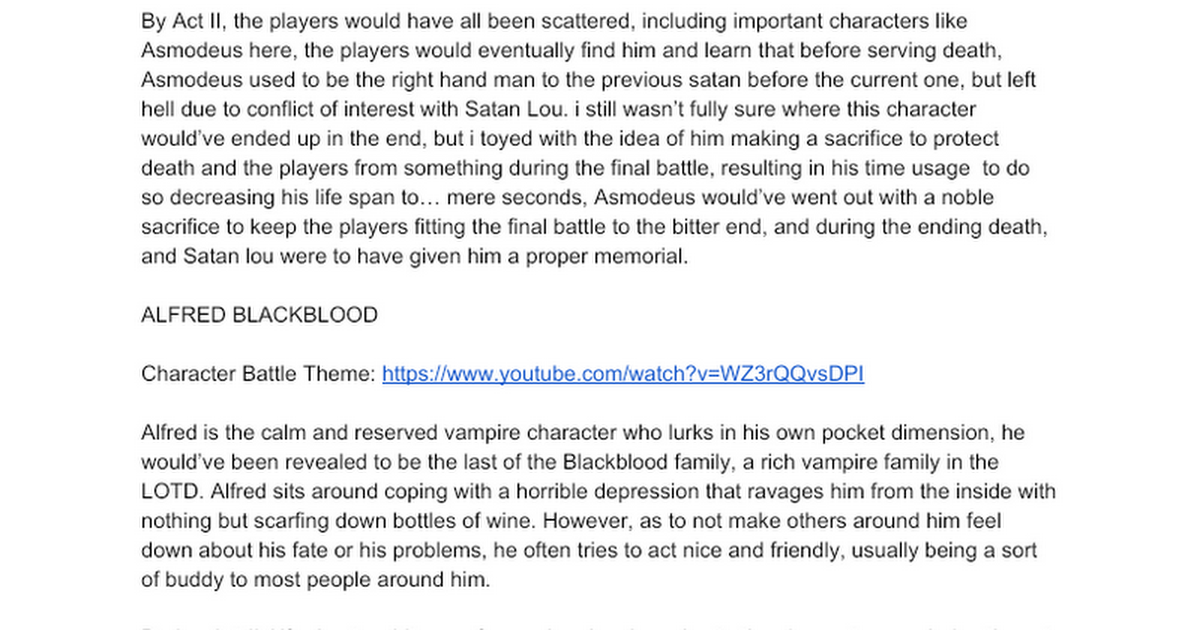 Alright, so… i suppose it’s time to mention how the story would’ve unfolded eh? Welp, here we go: first things first, the story was to be divided in an Act I and an Act II and there wasn’t a fully set in stone motion of how or when things would’ve been, so since each story bit surrounds a charac...

Most of the important things are on this document, enjoy.

Meta Knight_but_Terraria said:
I did have fun and still care while it was active, can't wait to see the document on how the story would have played out. I'm sorry that this whole thing didn't work out. If you don't mind me asking, why did you have so little time?
Click to expand...

As for the so little time thing, i guess you could say i just have too much going on, i have to balance work, a social life, my own fun activities AND try to squeeze the forum game in somewhere as well.. it just wasn't going to happen, and now with holidays coming up, it was even less likely to happen.

Like i said in the other post, i don't plan on forever leaving the TA game, but i'll be taking a long break before doing another serious one, i want to be in a much better position and know that i can deliver and finish the next one, should it happen. But if someone here still craves a more simply fun TA without any story to it, then the Discord one on our discord server will start, maybe soonish? who knows!

And, alas, another one of the few forum games in the TCF bites the dust. Shame, too, because Dollie had some story as well that I wanted to develop.

Dollie's real name was Luca. Her big sister was named Samantha. Shortly before Dollie died, Samantha had passed on due to illness. She managed to hold on by using Dollie as a vessel, and only because of her sheer resolve to protect her sister. This resolve also made her able to pull Luca into Dollie's form as well - but neither of them were able to make it fully, resulting in a crackpot-like Luca and an angry, cold Samantha. Through the story, I wanted the two of them to slowly become more whole through completing their unfinished business.

We all have our own story to tell. Even if we weren't able to finish them, thank you for giving us the right chance to start them.

While we are on the subject of characters and what might have been, I was planning to have Fedora Ron try to get into heaven by offering the bug-angels a hit of 420J.

That would have resulted in Judas doing a crusade onto you.