Pixel Art What if my mind's dreams come true?

Read the poll: since there're such things like copyrights & creative commons; i have to respect their properties. That's why i don't own some of the sprites in my collection for my gallery but they're here to fill the blanks in my arranged terraria world!
This sprite thread: this thread is %25 portfolio & %75 pixel art thread mix for one reason: Realistic crafting stations. You have been saw them in my main pixel art thread but what i decided that this thread just for crafting stations, other thread for misc. pixel arts.
I'm almost finished the renewed crafting stations btw. So let's begin then:

First of the generators: 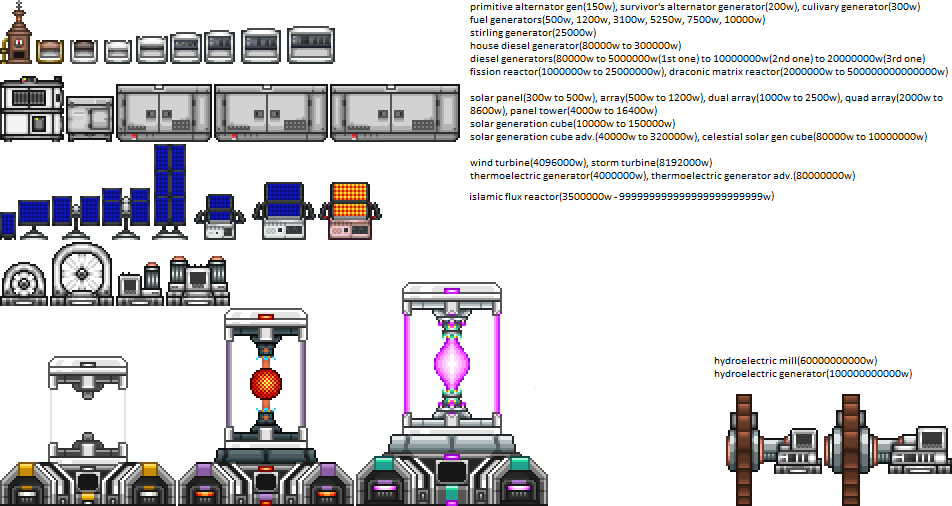 Some of them from "frackin' universe" mod & "feed the beast" mod but optimized for terraria by me.(of course). Names and their max generated watts written in this pic.(for you).
They're here to power the next level crafting stations with electricity that scaled as watt(w). I made them realisticly as possible to fit year ac5000.

Main crafting stations renewed.(again but completed.) Crafting bench can be made early but constructing table, mystic table, foraging table can't be made early game but you need them. Guide gives them to ya as a reward of a quest so don't worry. First row focuses on utility, second row focuses on magic, third row focuses on exotic utility(exploration, expeditions & etc.).
By looks of them you can easily decide which ones requires some watts to work. 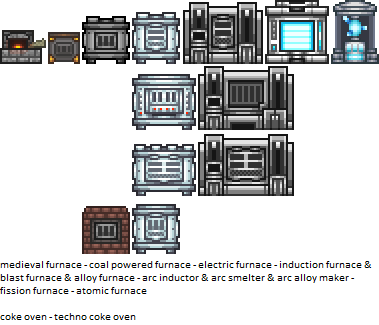 Now: metal smelting: in terraria: it is eazy but in reality: it's challenging: why? Because third stage and rest requires some watts to work. And that requirement increases in next stages and you need all 3 of the arc furnace types to craft fission furnace.

I've researched and most realistic version of forges are this. That furnace things are not furnaces: they're tool heaters. Only 4th stage: ancient forger requires some watts to work. 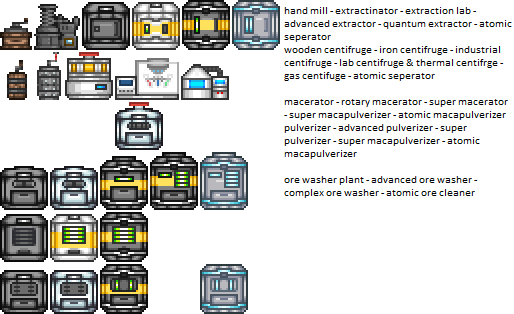 Let's become genetic engineers.(shall we?) Crossbreeding greenhouse can only do plant crossbreeding but it's upgrades can design some plant genes. Second row: sprouting lab & upgrades can extract genes from plants. Genesequencer can able to craft some plant genes. Ian Willmut's lab & it's upgrade can do plant cloning that emc transmutation tablet can't do. Electro-microscope can able to scan plant's genes so you don't need to be confused. Gregor's true lab is superb upgrade for gene-design lab, advanced xenolab, genesequencer & modern cloning lab but much more greater. As you guessed: most of them requires some watts to work.

Made the alchemy much more advanced. Alchemy stations can make potions that can give you abilities, flasks & potion potency increase, splash potions. Chemistry stations are based on element(periodic ones) manuplation with chemy tools. Apothecary stations are for medical potions and medicines & centifruging the blood & more. Lokman Doc's true lab is multi superb upgrade that needs more watts.
Who is Lokman Doc: The legendary muslim alchemist that lived in Arabia long ago & found the true immortality. It's in the religion.(so this isn't a folklore.(pls. folklores are stoopid.)) But one day he was walking on the bridge with his formula at calm weather but Allah(God) suddenly created strong wind that made the formula fell of the bridge in the river. Then he realized Allah(God) tried to prove 2 things: Everything is possible when you belive and stay determined. And immortality is forbidden for this judgement because it breaks the life's main reason.

Cool sprites! This could really make make a mod about advanced electricity and alchemism with potions.