tAPI WorldGen Plus ~ Why stop at a world when you can have a multiverse?

Finally, after more than a month of waiting for r11 to be public, and almost as long not getting around to doing much beyond idle planning (<.<), I'm finally ready to introduce:

~ WorldGen Plus for tAPI ~

Veterans of the Terraria modding scene may remember this project from back in the days of tConfig; it offered a choice between multiple completely different world types, as well as additional customization and various small tweaks to the standard generation. Unfortunately, to my knowlege nobody ever really made a generator (or even a decorator) back then, so its potential was somewhat wasted at the time. This time around, however, both using the mod and developing for it are significantly streamlined over its tConfig iterations.

Features:
- Multiple generators for different world types; modders can easily add their own
- Custom world sizes; from small to large and anywhere in between (but can be overridden by the generator for extra control)
- Settings pane for generators to offer further customization
- Generators can require the selected character to unlock them before use
- World type is saved with the world, and gets hooks to offer unique gameplay for each type; one could, for example, make a gamemode world generator that applies its own specific rules 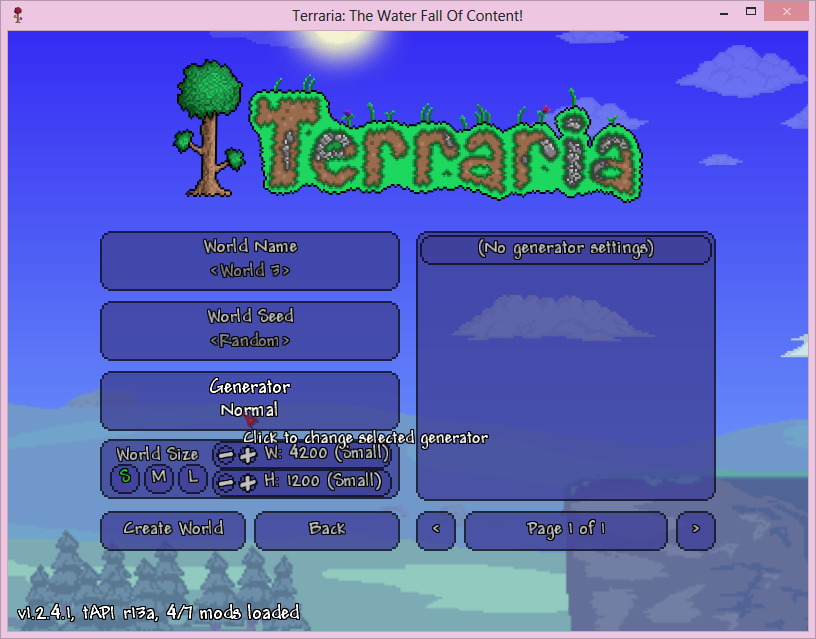 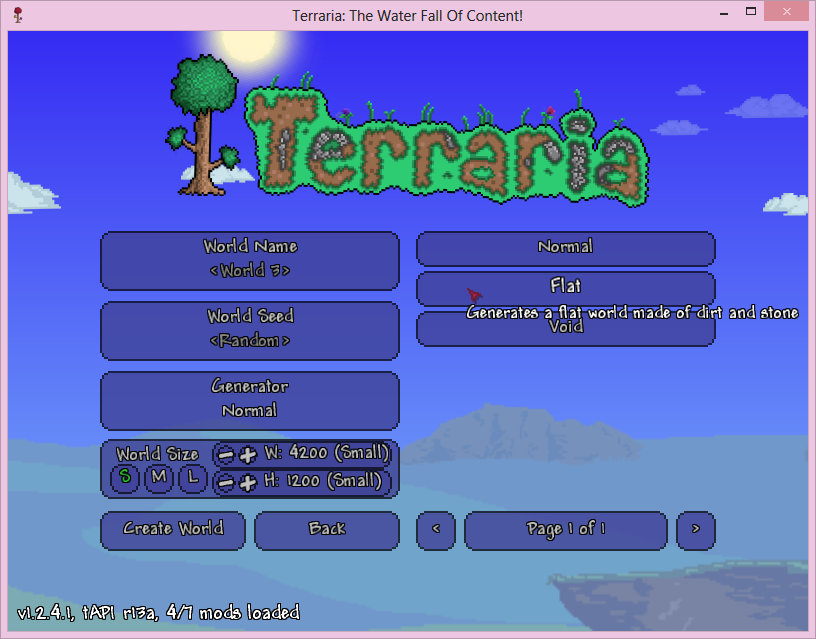 
~ 1.0.1 ~
No longer nullrefs on load when there are mods loaded with no assembly
Reloading mods without restarting no longer causes the create-world menu to derp out

This looks fantabulous!
But, What do you mean by this --> "Generators can require the selected character to unlock them before use"


Coolgum15 said:
This looks fantabulous!
But, What do you mean by this --> "Generators can require the selected character to unlock them before use"
Click to expand...

For example, if you have a world type that you want a player to have to unlock by doing some process ingame, you can override IsUnlocked and make it so that its list entry is grayed out and unavailable unless the character you've selected has met certain criteria. This allows for having progression through multiple world types.

Coolgum15 said:
This looks fantabulous!
But, What do you mean by this --> "Generators can require the selected character to unlock them before use"
Click to expand...

I cant download, link broken, or attatchment not found


For example, if you have a world type that you want a player to have to unlock by doing some process ingame, you can override IsUnlocked and make it so that its list entry is grayed out and unavailable unless the character you've selected has met certain criteria. This allows for having progression through multiple world types.
Click to expand...

That's pretty cool! I look forward to trying this out eventually

Hmm. It's been awfully quiet around here...

Anyway, I'm planning on making a generator minipack of gamemode and miscellaneous worldtypes. Any suggestions?

A mod that makes you unlock generations ?
This. is. the. best. idea. about. world. gen. ever.

If you could make it so that we can set the ores that would spawn, it would be awesome! Great mod overall, I hope you'll add more things to it.

How do you access the settings pane to customize the generator? No matter whether I pick "normal", "Flat", or "Void", I can't click the "no generator settings" button as it is grayed out, and I don't know what else to do other than to make a normal world without customization.

There's no customization implemented yet; that'll come in a future release. The functionality is all there for custom generators, though!

Ooh, sweet! I'm gonna get this!

I kinda wish this mod let you choose between corruption and crimson, I am sick of having to go through tons of worlds trying to get crimson.

How to change the world seed?

Updates with actual options for normal worldgen coming eventually... I've been away for somewhat of a while >.>

Pritty cool idea actually but yeah options like ore vain size, what ores apper and stuff like that would really be awesome

One thing I would fix is if you could geat molded ores to spawn... I can never find any with this mod o.e
G

One thing that needs to be considered:

This mod currently wrecks other mods that attempt to add in their own WorldGen ores. I had this mod running for a while when I first came back. And found out that in the Thorium Mod, which adds new ore types during WorldGen, those ores were not added, because this WorldGen runs differently.

So, to use this mod, at present, would mean giving up on other mods that alter WorldGen in some way. Unless the mod developers work out something with this mod, in order for their generation to be included with what WorldGen Plus does.

Maybe there needs to be some kind of compatibility options, for any mods that add WorldGen, so if you use this mod to generate your worlds, it will tie in with the others.

At the moment, I'm somewhat conflicted on this one. I like the idea of having options, but if I'm unable to get the WorldGen from other mods, I will probably favor those instead of this one. I'm not sure really what kind of fix would be best.

After all, if the Thorium Mod has a world generator built into this, so their ore is generated, and then I had to create a generator to make the Periodic Elements mod I'm working on generate all of it's stuff, you couldn't use both at the same time. So you'd have to start picking and choosing which mods you had.

I'm new to the scripting stuff. In theory, to me at least, the best way to fix it would be to have the generators chosen here, and then to have another script tied in, to run with ANY generator that is chosen, no matter who has added it. To run checks or something, such as "If Thorium Mod is enabled, run it's ore generation.", then "If X mod is enabled, run it's world generation."

Or maybe it's too complicated, but if that were the case, people would have to decide whether they want customized worlds, or the ability to use their favorite mods. Which can be a difficult decision.

I'm going to assume that it was an oversight on his part, although it could have been on purpose. I can understand wanting to prevent possible incompatibilities, though he should be adding non-tAPI WorldGenTask's to his default generator, at least.
You must log in or register to reply here.
Share:
Facebook Twitter Reddit Pinterest Tumblr WhatsApp Email Share Link
Top Bottom