Decided to share some screenshots of my creations at my main world.
They are built partly by hand, partly using TEdit (mainly for the more time-consuming tasks)
Everything is still work in progress.
Spawnpoint. Npc Housing, tree farms, and a train station that connects to a world-spanning skybridge:

Storage area and herb farms below spawn. The signs on each row are to remind me when to harvest the plants: 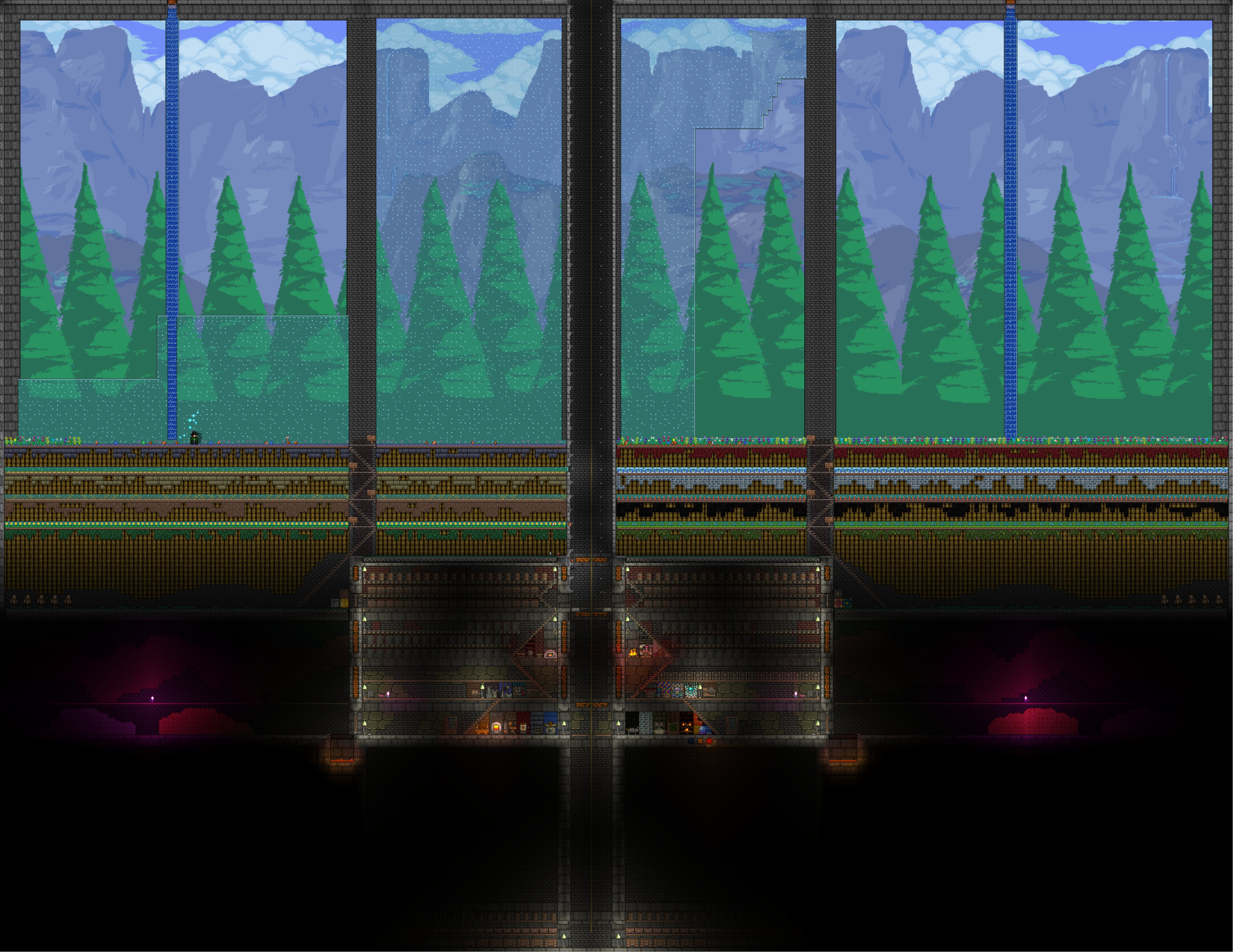 My arena, and also an attempt at underground stuff with TEdit: 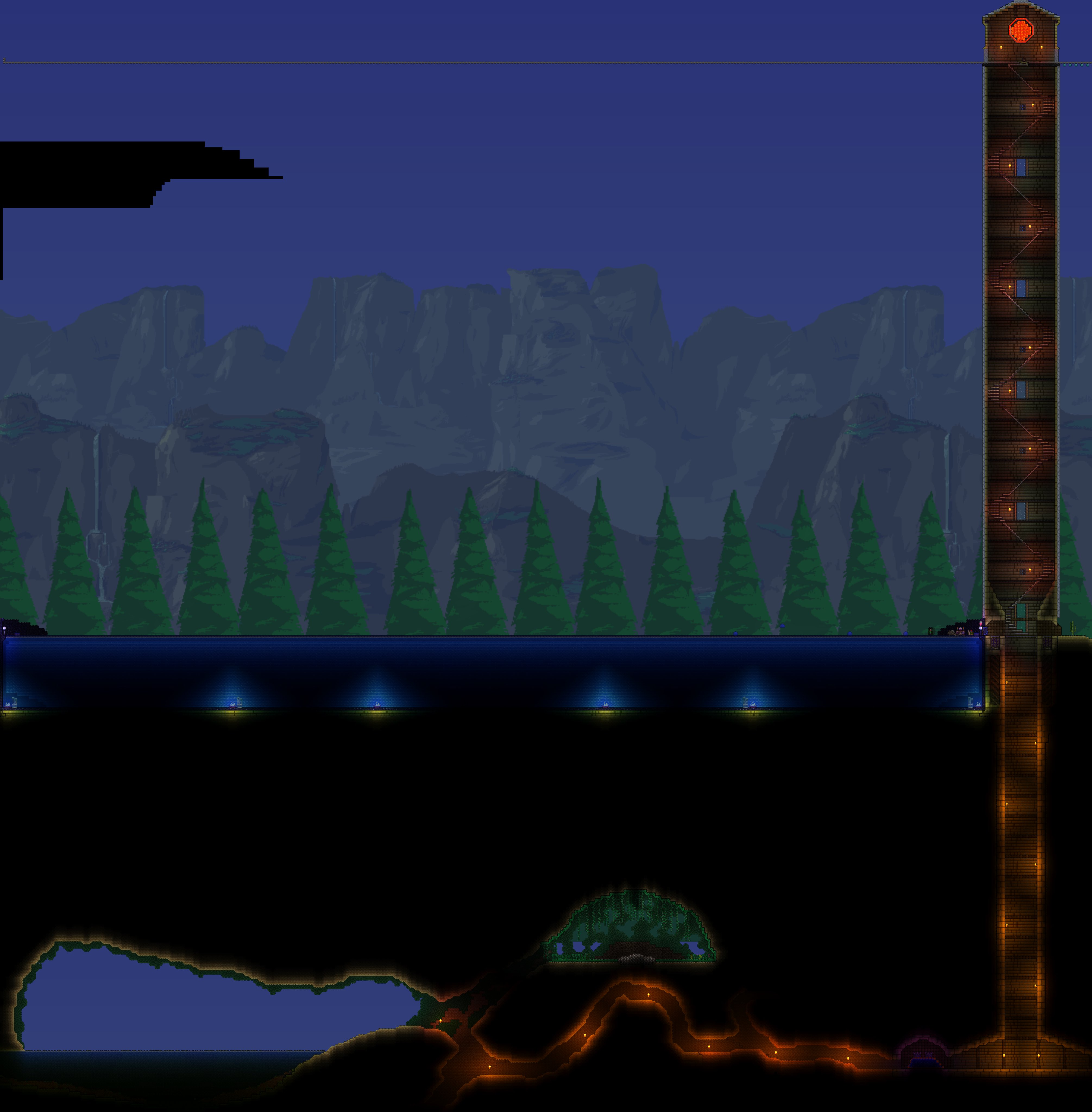 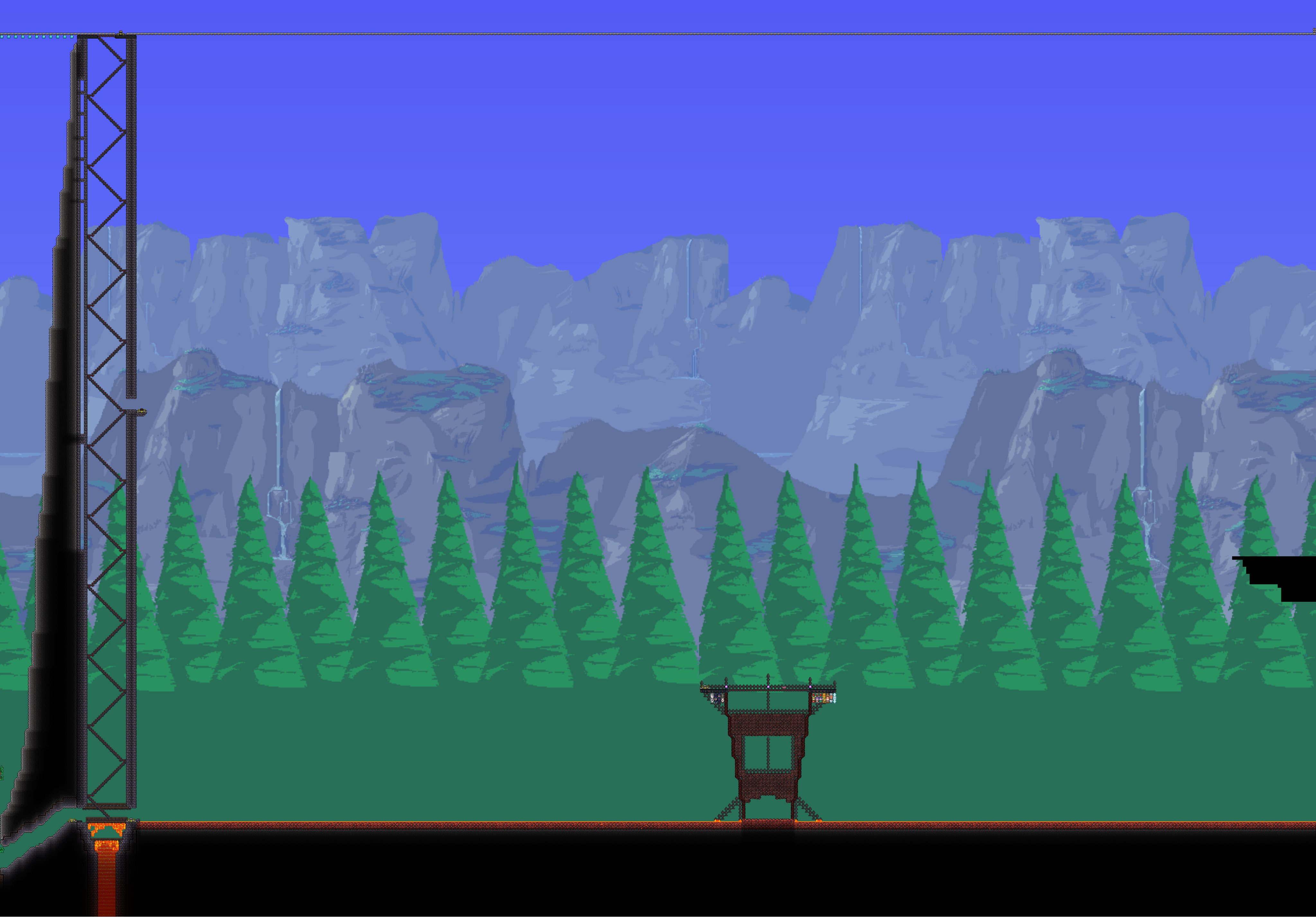 My 'mausoleum', where i count how many times my character has died, and where i show the boss (and fishing) thropies i got so far. Also serves as the dungeon entrance: 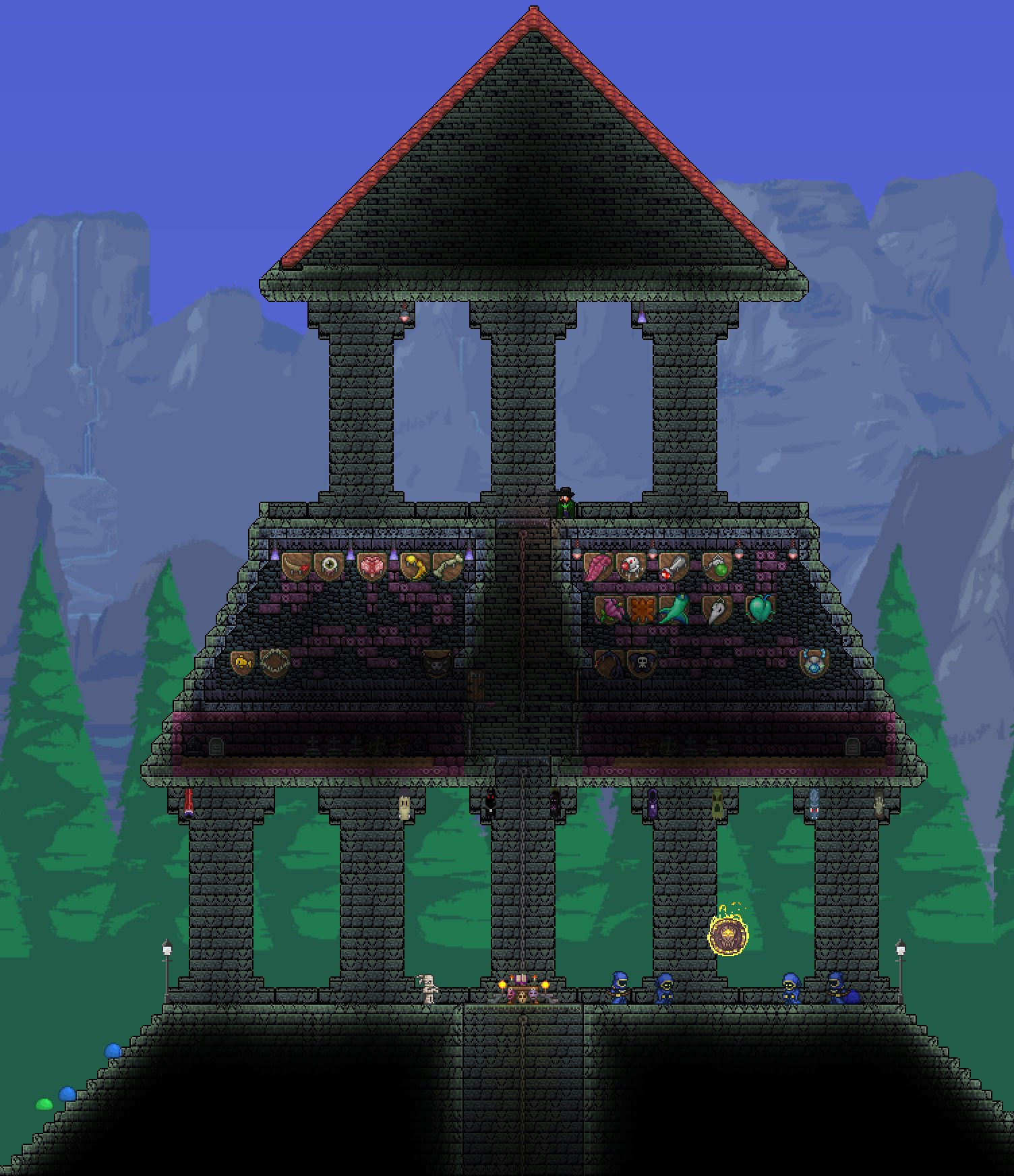 Thanks for the comments . Surprisingly enough, i didn't die a single time against the cultists, those gravestones were caused by the Mech Bosses or by general clumsyness from my part.
Well, i grew tired of that spawnpoint, so i decided to start it over:

As you can see, it's still a very early draft. I'm also undecided about wich material looks best for those arch frames. I'm open for suggestions.
By the way, my character died 7 more times trying to get a Bone Key. Need to update that mausoleum
Edit: More progress on the tower base: 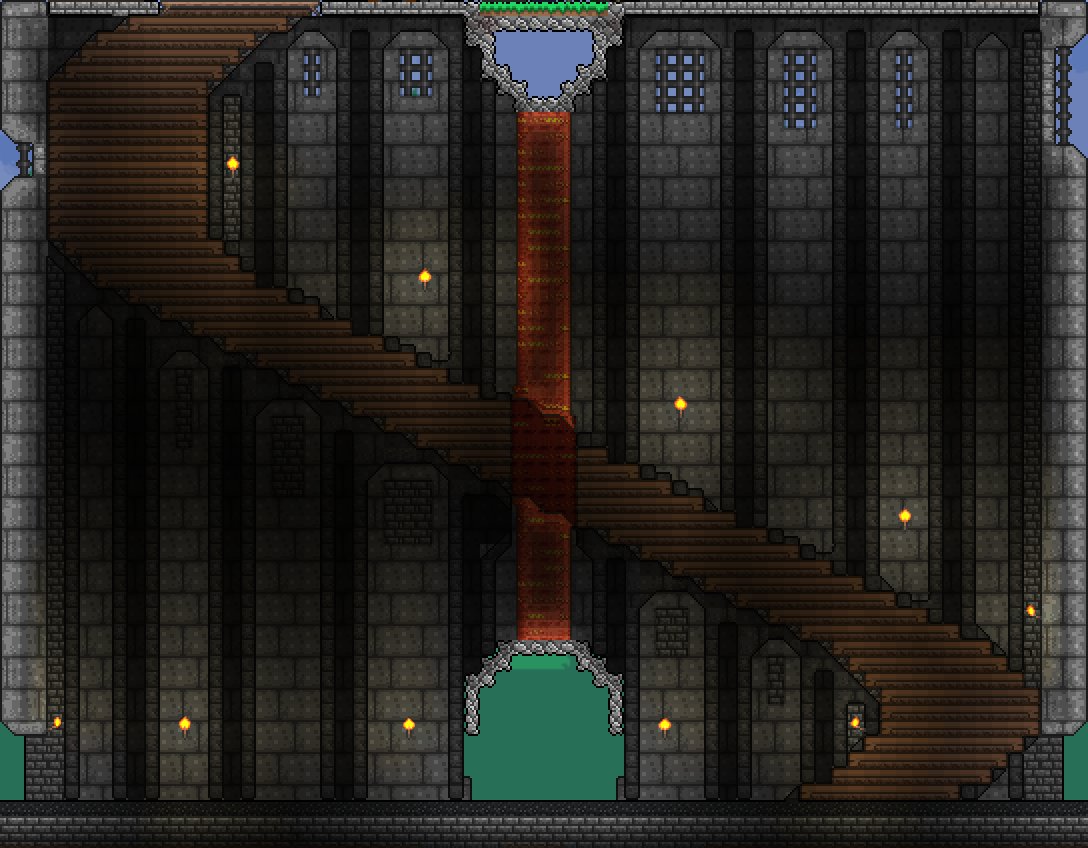 Yo, these are pretty fricken good. Love the spawnpoint as well as the staircase.

omg that is amazing O-O the spawn point looks so epic!!
C

Thanks for the comments, i appreciate it
Even more progress:

I think that's it for the main body of the tower. Time to start the train station
Last edited: May 16, 2020

It's looking great. Will the train station and railway have trains on it?
C

So many real life events and i almost forgot about this!
Progress on the station: 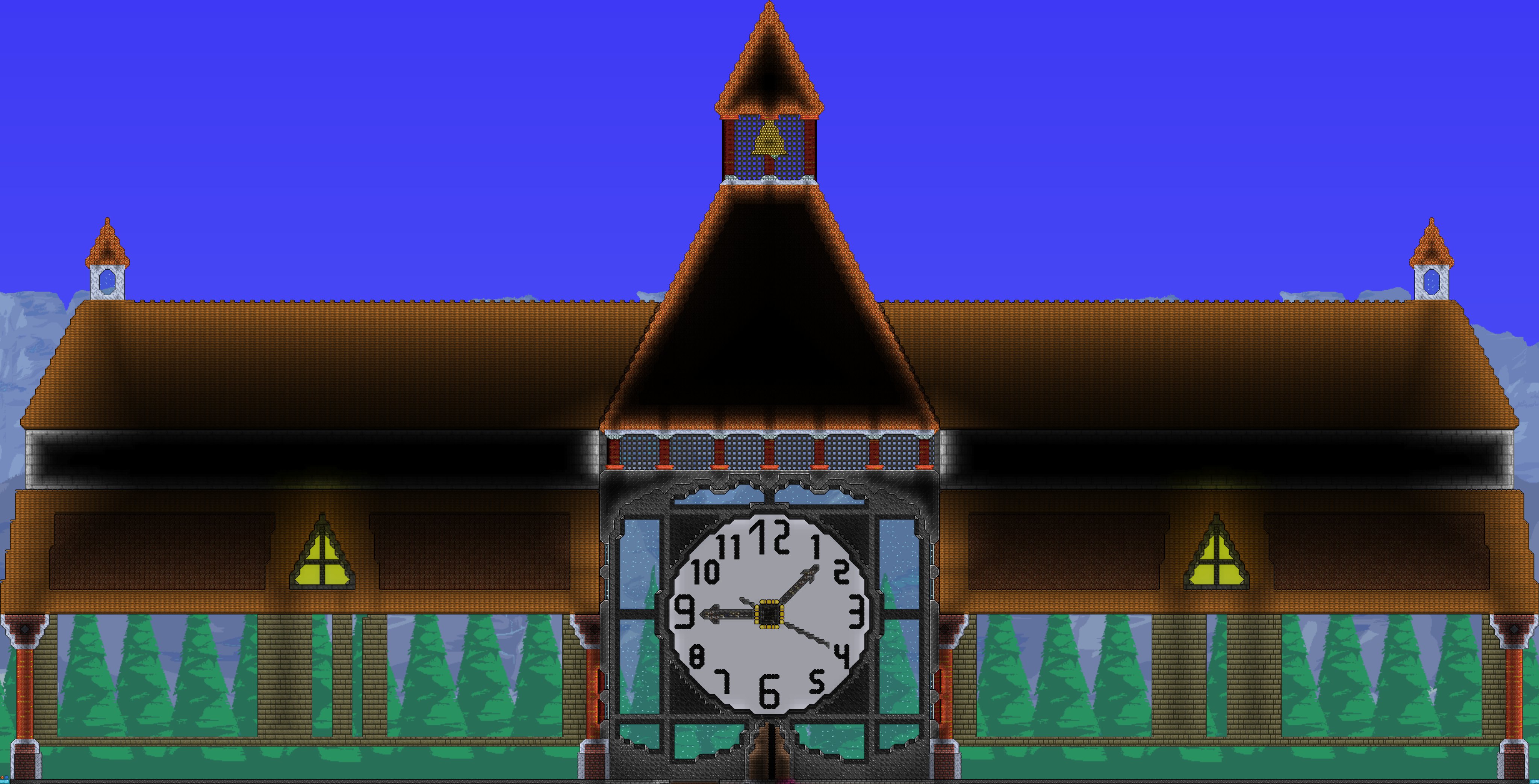 Still lots of stuff to do. And yes, part of the plan is to incorporate trains into this build

Five months later, I got back to the game and added the trains and the rest of the facade:

A bit unsure about the scale of the trains. Tried to make them proportional to my character, but they look a bit small in comparison with the building.
This is still unfinished. I plan on adding stuff like catenaries.
By the way, I dreaded having to actuate that roof, then i found out about The Grand Design
Last edited: May 16, 2020
C 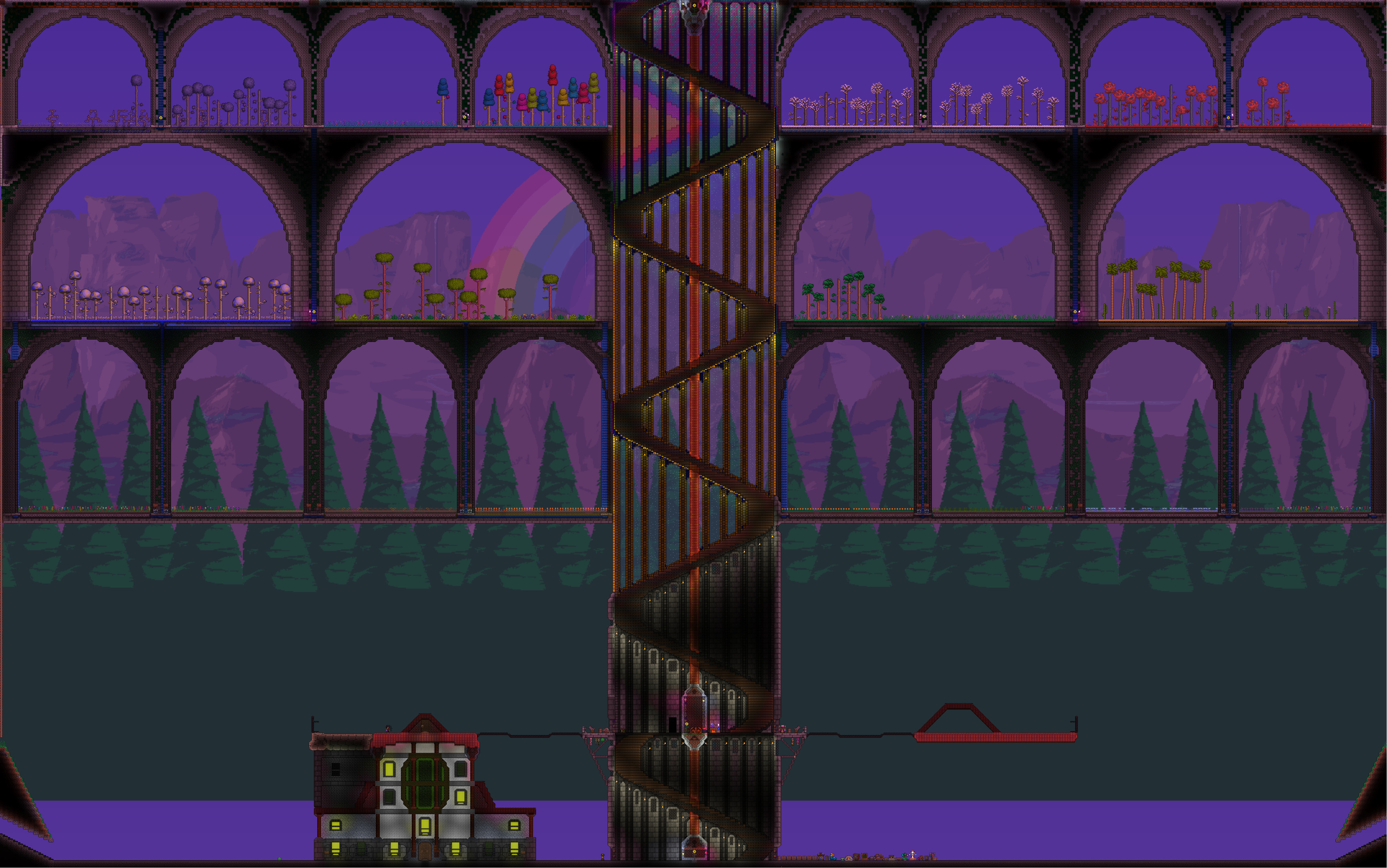 Added farms, one for each wood type, mushrooms and alchemical herbs. Also beginning a town at the base, starting with a bank (and not just because I wanted an excuse for that Dungeon Keepers arena ) :

I got inspired by CheesyPaninie's Wygol House tutorial (part 1, part 2) for the exterior/interior idea. This building will be the Tax Collector's home, but for the moment everyone else will live here until I give each of them a proper house.
Not everything shown is final, so feel free to tell me what can I improve.
Last edited: May 16, 2020
C

In preparation for the upcoming 1.4 update, I decided to break my personal 'no TEdit' rule for this world just to add some landscaping drafts around:

Started filling the space under the skybridge with clouds. These ones are above the snow biome. Also made some rain clouds for the jungle and some small ones for the desert.

A hand-drawn TEdit-ed giant tree, sloped and furnished afterwards in-game. I need to work on the illumination on this one, it's too dark. 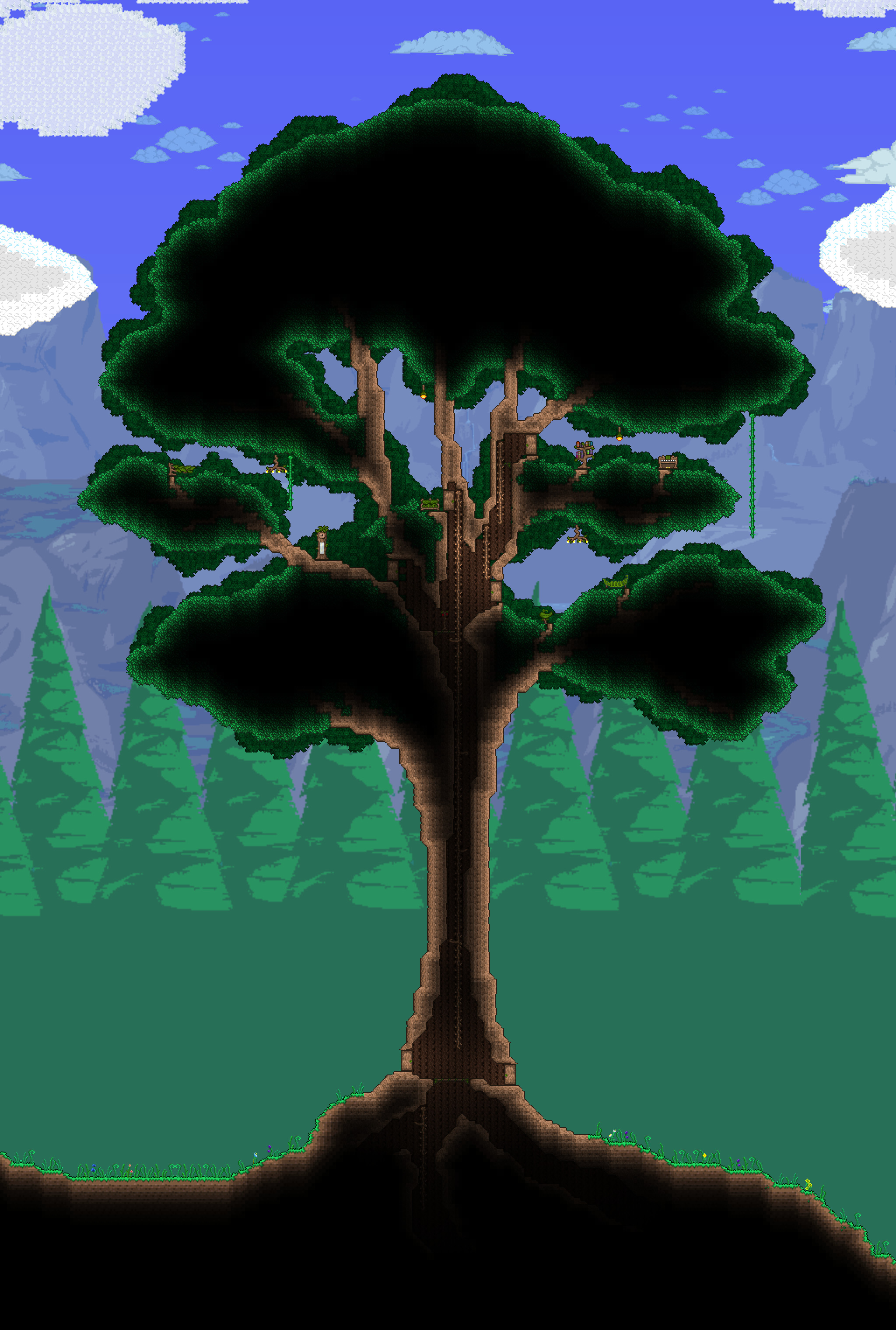 A crude draft of some mountains, meant to be the foreground version of the background ones. Also an attempt at lightning them just so they don't look like giant caverns. 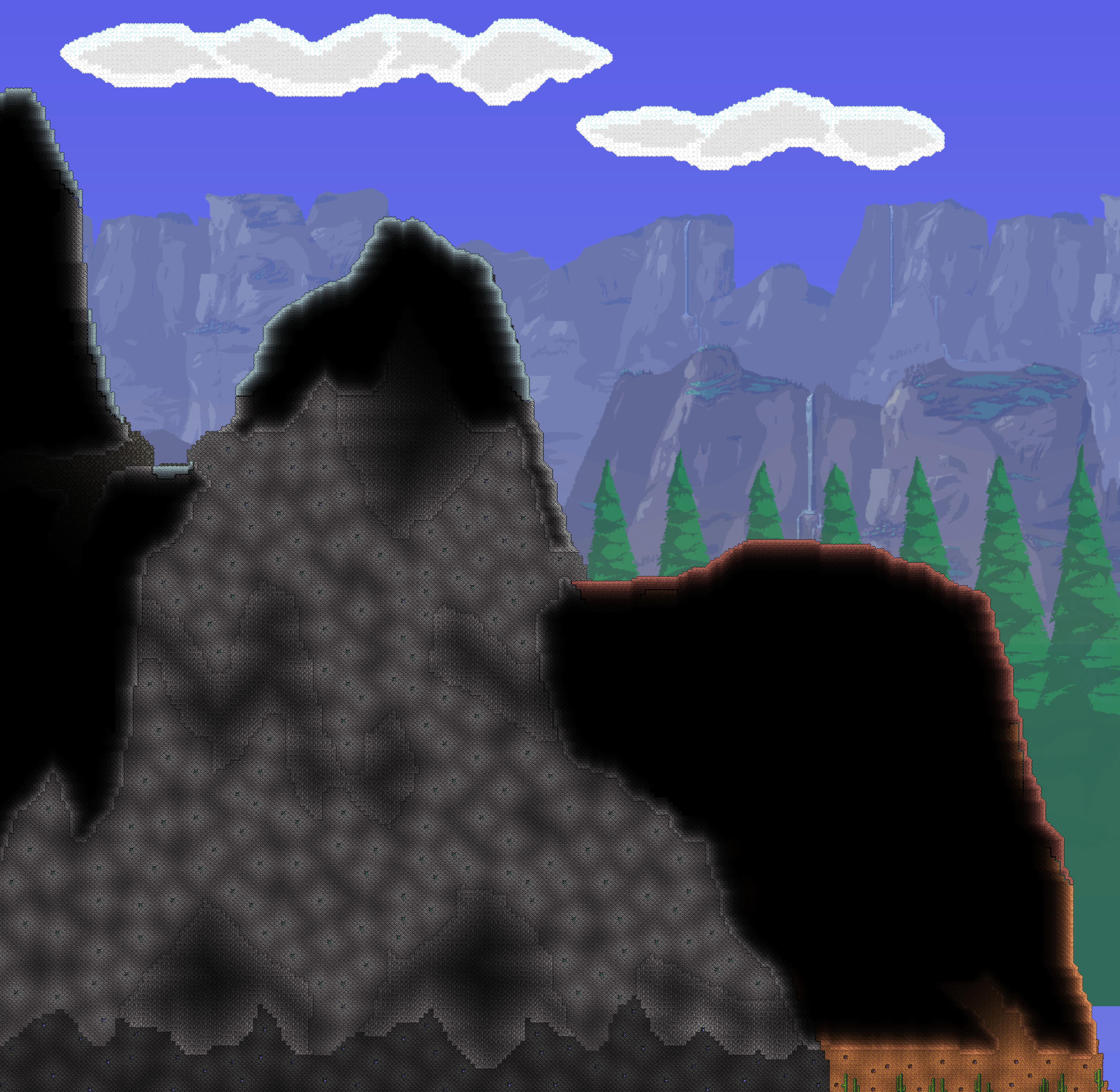 Not everything was built outside the game. I made a fishing shack surrounded by large ribs, right between a dual crimson-corruption biome. Fun note: I did not know that it would count as both for fishing purposes, so I now have a single source for both ebonkoi and hemopiranha .

And of course, cannot resist showing progress on the spawn train station. Tree, bait and herb farms are done, removed DD2 pedestal and added some tools at spawn for harvesting (luminite hamaxes are too chaotic for smart tree chopping ) Also completed the NPC housing, although I'm pondering about moving them around the world. 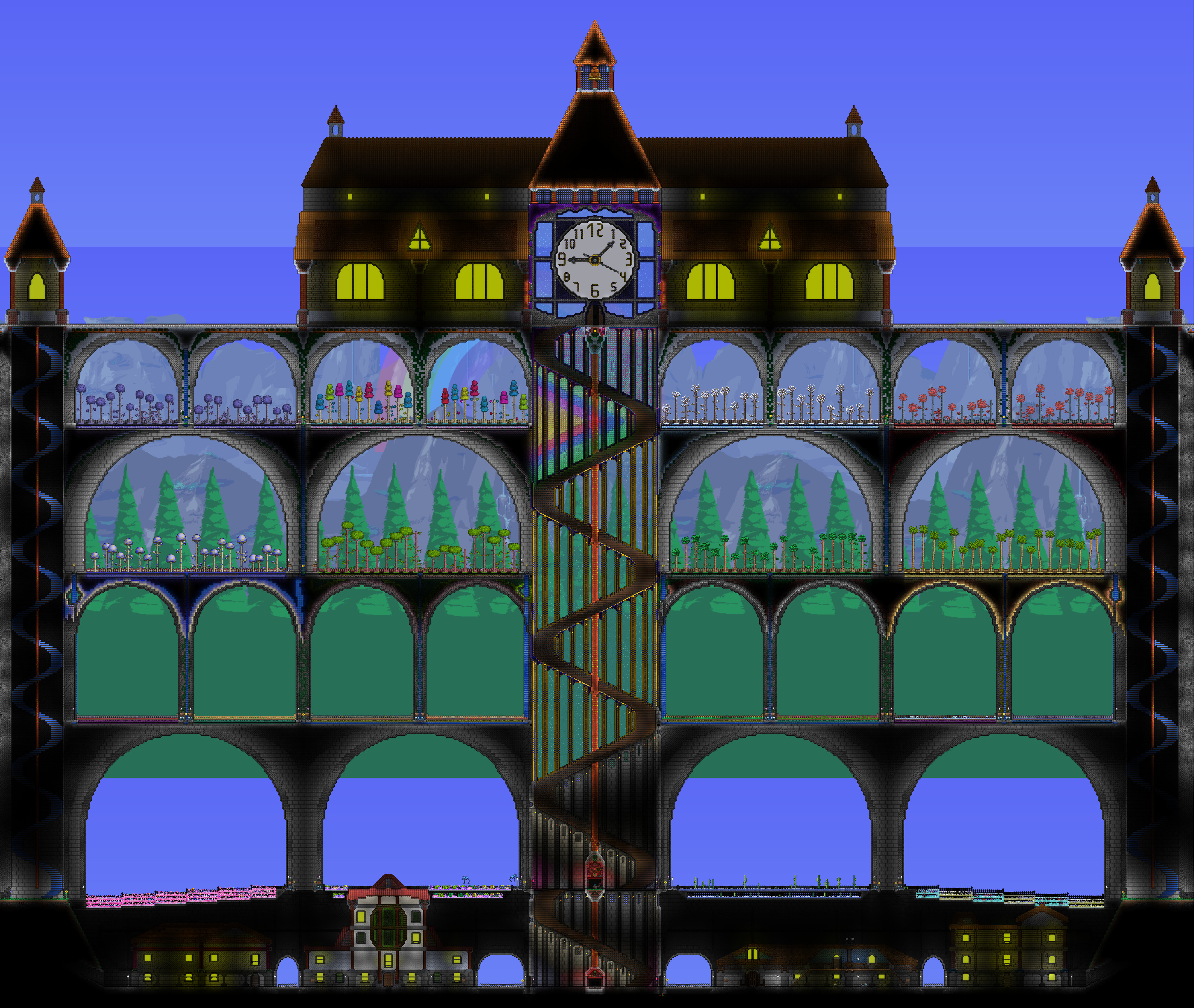 As usual, I'd like to know what anybody thinks, and also open for improvement suggestions.
Last edited: May 16, 2020
C

Started Building some biome-themed homes for my NPCs. This is the Pirate's, Angler's and the town dog's home, a ship that got abandoned at the shipyard and got overtaken by sand and ocean plant life. The captain's crew has recently patched most of her hull, but she's still not ready to sail: 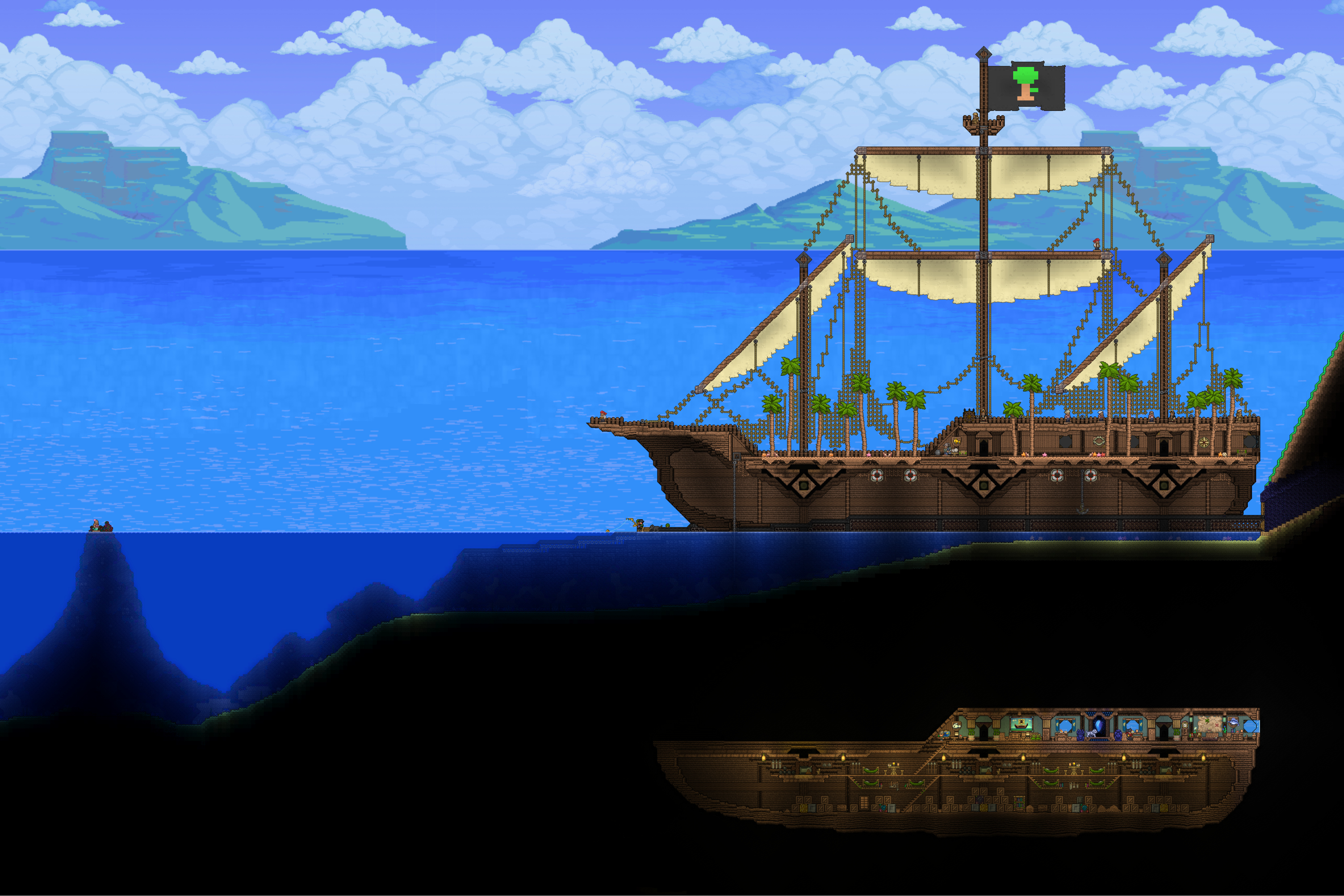 (For some reason, the image has some warpings on it. No idea what caused it)
The story was more of an excuse to justify the presence of palm trees on the deck (I wanted some coconuts and had no ocean shore left, and I converted the other ocean into a meteor-themed arena ) I experimented with actuated echo blocks to give some lightning underwater. Also gave the ship the exterior/interior treatment to secure the pylon and the NPCs, and also to experiment with a different kind of 3D illusion (Althought I kinda ruined that by showing the 'underground' portion)
The diagonal sails were inspired by this build on reddit. Shoutouts to Frikandelbroodjuh for the idea

Made some progress on the east mountains near spawn: 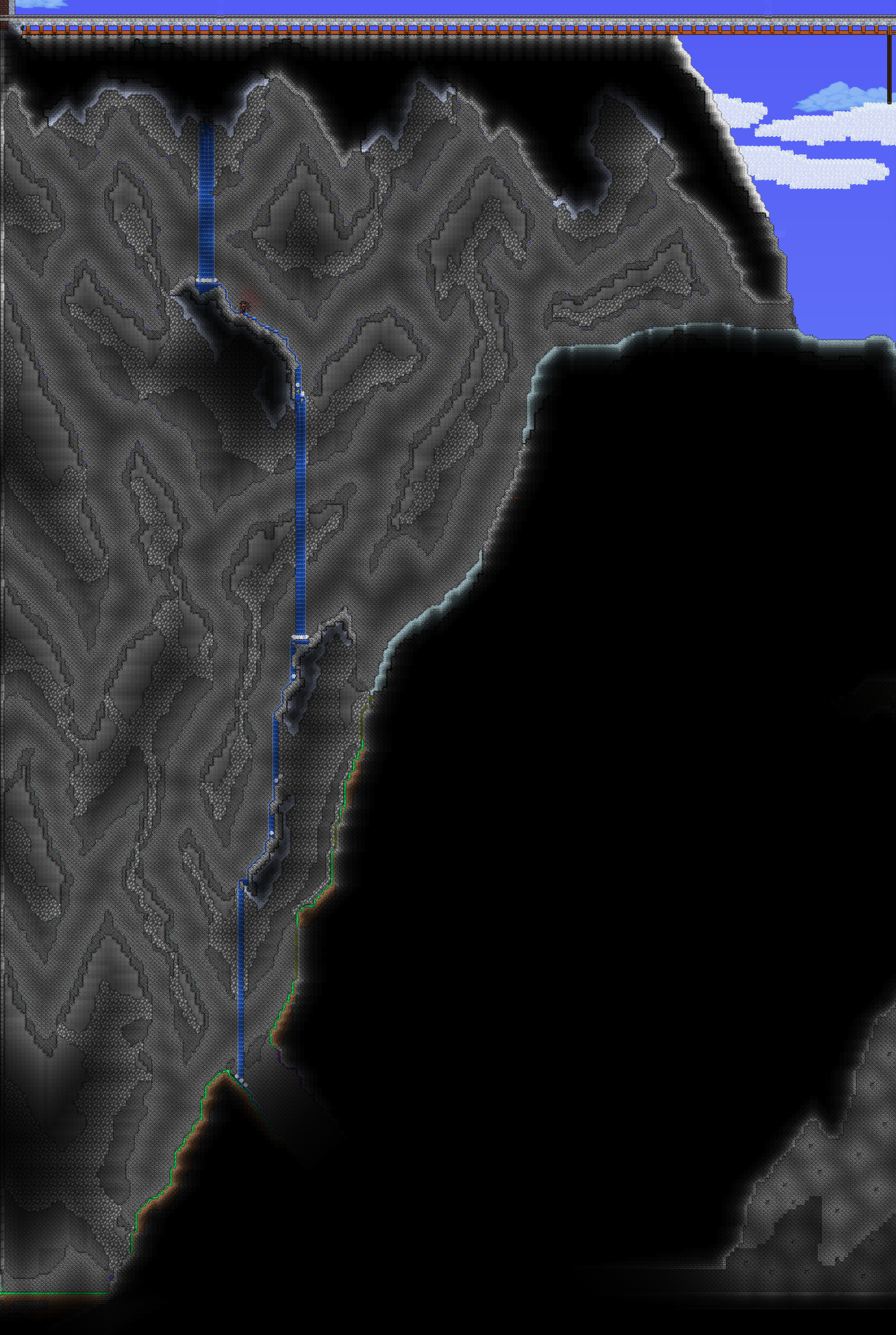 (With my previous character for scale)
I think I'm satisfied with the choice of blocks for the cliff face. I used a combination of stone wall and craggy stone wall painted white, as well as stone and marble blocks, both actuated/painted and natural. The 'snow' is actually painted slush blocks, to avoid making a snow biome.

EDIT 10/30: I've been working on the next biome-themed house: 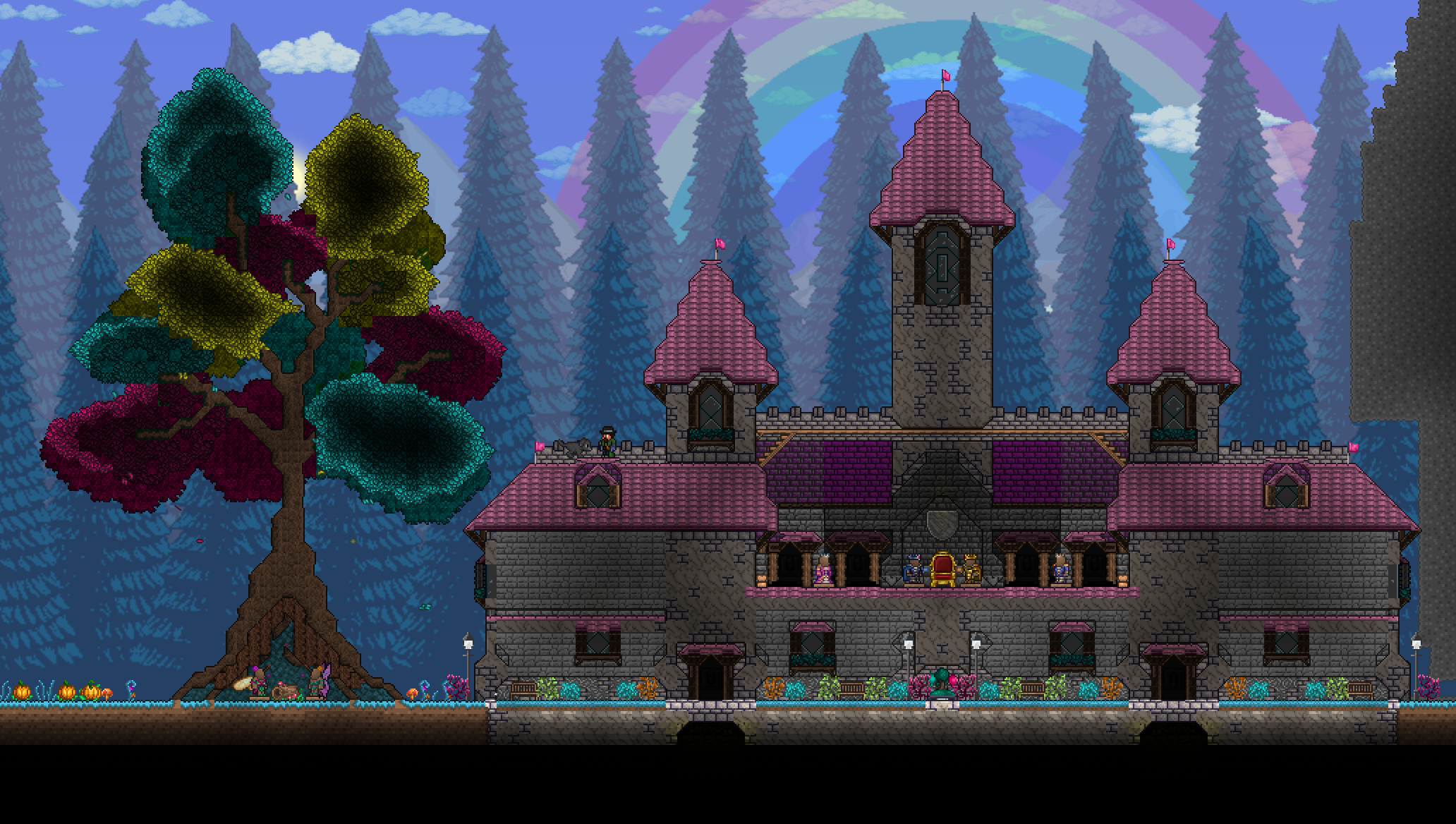 It's a palace in the Hallow, somewhat themed for the Princess NPC, althought the Tavernkeep, Demolitionist, Wizard and Party Girl also get their own rooms here. I also made a tree with a multicoloured canopy
Here's the interior of the palace in a separate image, just to not ruin the illusion of an 'interior' like before:

Here's the NPC rooms as described before. Also had a bit of fun making those fake doorways with black painted topaz gemspark wall, I think it really adds a hint of a third dimension in the building. This is only one half of the interior, I'm planning on creating another interior that can be accessed from the upper teleporter doors.
Last edited: Oct 30, 2020
You must log in or register to reply here.
Share:
Facebook Twitter Reddit Pinterest Tumblr WhatsApp Email Share Link
Top Bottom