What this Re-texture does is makes all NPCs (both Townsfolk & Enemies), The Player (you), Armor, Accessories (ACCs), and more... look like mermaids or fit on to mermaids! (you know what I mean)

As of right now (and based on the title of this forum), this re-texture is not done. In fact, I recently restarted the re-texture to make it easier to install and easier for me to make.

How To Install:
Follow instructions on This Page: http://forums.terraria.org/index.php?threads/terraria-retexturer-trt-a-tccl-remake-for-v1-3.40503/
(it's required to work)
Then Move Folder(s) (put folders into one big folder for best results) into the "Custom Content" folder. That's It! Your Done!

How To Uninstall:
Remove folder(s) from "Custom Content" folder.
To uninstall TRT: http://forums.terraria.org/index.php?threads/terraria-retexturer-trt-a-tccl-remake-for-v1-3.40503/


Most Important:
Re-make player (you) mermaid textures
Doesn't take much to complete but it's still a pain in my butt.

It exists:
Better presentation for this Re-Texture...
More description on how to make this mod work...
Delete the comments below when the time is right...

Got something to suggest that's important? Tell Me!
Iv'e seen it:
None

I Know it exists:
None

Idk if it's there or not:
None

Find a bug? Tell me about it!
Because not everyone has a super computer (don't worry... i don't have one either), I might take the time to make an XNB version to reduce lag but they are a pain to make because there are like two programs that make XNBs and one doesn't work on my computer anymore, and the other I don't even know...

Also custom mount saddles? Idk what I will do but it sounds pretty cool... it also sounds like a pain to figure out which animation for the player I need to work on to make this work plus changing the armors too, so if I were to do this, I would do it before or after I complete the armors and player to avoid complications in between... (that's why it's in the Ideas box)

Awhile back when I was making the armor for the first time, I wanted it to look Really cool but I feared that by doing so you would lose the ability to have different colored tails while wearing armor, so instead I envisioned "War Paint" for the tails which would replace the leggings, and the chest plate would contain the lower part instead.
It sounded great at first but now I'm not so sure because if you wanted different leggings with a different chest plate, you lose that ability + the ability to change the color of the leggings without changing the chest plate.
So now I'm thinking, maybe I'll keep the style I had before but build on that. With this you lose the ability to have different color tails with different clothing but you'll look really cool regardless + you keep your color changing abilities with your clothing, and honestly, I think that would work better than everything else iv'e tried. (if I knew anything about programming, I would have both work, but I'm not so you and me will just have to live with it

)(some situations with vanity items might be a bit weird now that i think of it...)

I might make the intro pictures when you start up the game say that the mod is working, and if you know what your doing I'll make a pack that doesn't say it's working and you'll need to go based on your judgement...
We ain't got none yet!

(well we do but they suck... They are in the comments below... I want new pictures...)
I know what your thinking: "Mr.Request person man! Where's the Re-Texture?!"
To answer your question... I put a flamethrower up to it and turned it to ash... but it will rise from the ashes stronger than ever!
Last edited: Apr 5, 2016

Can you attach a screenshot? Hard to imagine my player as a mermaid 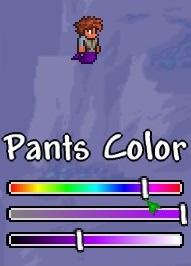 ( @psmith )The first picture is when you create a new character.
Second picture is showing off the ability to change the color of said tail.
This also works on different styles and even Females and THEIR styles too!
This is basically a full-scale re-texture of the "Mermaid Costume" (Given to you by the "Angler" NPC) but also compatible with NPCs and Armor.
Like i said the Player Model has been completed and will not be changed (unless I find a bug).
Last edited: Jan 21, 2016

Damn this texture pack is hilarious

the fact I've sort of given up on it and got board or that it's actually hilarious...
H