All-In-One Speaker Block
The new Programmable Speaker block allows you to create music by chaining many of them in a row. Once the specified delay of one block is over, a directional signal is emitted in the direction it is facing, activating the next speaker in the sequence.

Programming Interface
A Programmable Speaker can be changed to any note and can have a delay until the next in the chain is activated, all modified by right-clicking the block. 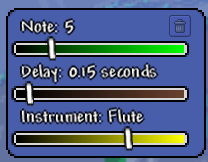 Download
Programmable Speakers is available on the Mod Browser for tModLoader v0.11. However, you may also download the .tmod file manually from GitHub.

I have a problem: When i connect 2 delayers (or speakers), so making legit songs in this mod is still impossible.
Also the "Delay" section on speaker should be replaced with "leingth" (it will make note leingth customisable). Just because repeaters are better.

Blood Crawler said:
I have a problem: When i connect 2 delayers (or speakers), so making legit songs in this mod is still impossible.
Also the "Delay" section on speaker should be replaced with "leingth" (it will make note leingth customisable). Just because repeaters are better.
Click to expand...

Because this mod aims to work within the bounds of Terraria's wiring system to allow as much customization as possible, it is rather unintuitive to use, and I apologize for that. The best way to play more than one note with a delay in between is something like this:

This is why the Programmable Speaker and the Precise Signal Repeater simply emit a second activation signal after the specified delay. More than one color of wire can be crammed into one space, so you can activate both colors of wires inside the block at once after the specified delay, which works well with makeshift diodes formed by logic gates.
My issue with doing away with the "delay" system altogether is that the person writing a song should not have to measure the distance between the notes, but rather the time between notes including the time it takes to play the note, to approximate the words of a friend of mine who is a musician. The "delay" on a Programmable Speaker begins the moment it receives an activation signal, and refers to the delay between activation signals, not the delay between notes. Additionally, having to place a Precise Signal Repeater between each note is a waste of money and space.
It is definitely possible to create music within this mod, and I've attached a video to the main post to demonstrate this.
Last edited: Jul 6, 2019