I was experimenting with the snapshot feature on the big map, and I was curious to set the frame to the entire world and seeing what would happen. It's a lot to describe, so I have filmed and thoroughly replicated the bug. My first attempt at doing this, terraria crashed, with a title screen message "Bad header caused buffer overflow", and presenting me with this stack trace for you guys: 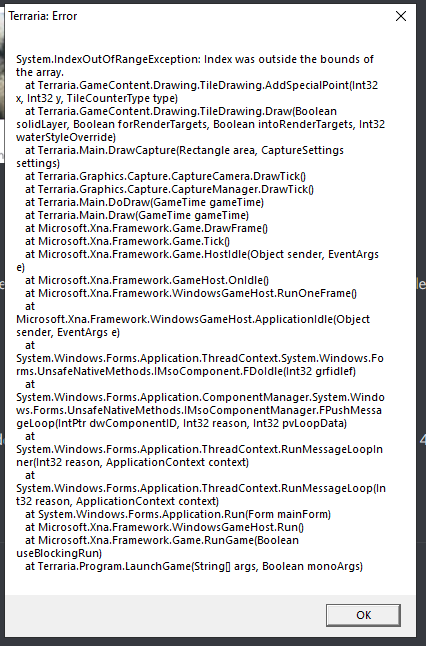 My second attempt created the image, but I don't believe this is what I would expect:

My third attempt, seen in the video, shows a different image, and a step by step replication:

Note that the steps above were conducted in a "Host & Play" server. I attempted to do this in Single Player mode, and it caused the crash report seen above on three tries consistently, when the former caused the crash on the first try, and the strange bugs depicted on consecutive tests.

UPDATE DETAIL: The NPCs are totally fine. This is only happening on the map. If I go and actually visit the NPCs, they are just fine, and their map icons stop phasing
You must log in or register to reply here.
Share:
Facebook Twitter Reddit Pinterest Tumblr WhatsApp Email Link
Top Bottom