Welcome Vault Hunter, to a new world!​
This mod adds one thing, and that is a whole lot of legendary guns from one of my personal favorite games, Borderlands 3. I was inspired to make this after playing @Yuyutsu's mod Guns, Glorious Guns! which is one of the best mods out there for early game rangers and can procedurally generate billions of guns. Not having the knowledge to do that, I opted to instead spread out the guns throughout the game as rare drops from bosses, minibosses, and specific enemies in the spirit of Borderlands.

This adds 47 new weapons throughout the game, and due to the rarity, I made sure they pack a little more punch than your standard vanilla guns 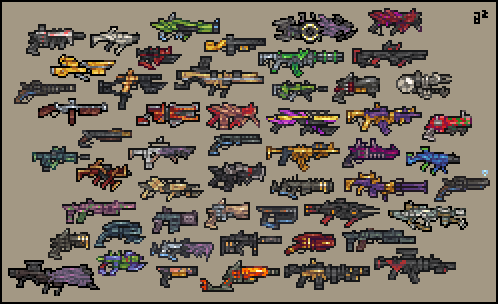 (Note: some items pictured were not implemented for one reason or another, may be coming in future 1.4 update)

Reserved I guess? I don't know if I'll ever use it but all the big mods do it and I want to feel big