So, before 1.4.1 dropped I had my Forest home with 4 NPCs who didn't had a problem with each other. While reading the patch notes I found how the new cap for the crowded mood was increased from 3 to 4 .

The number of NPCs before "crowding" starts has been increased from a town of 3 to 4.

I didn't know about the old 3 cap but hey, everything is fine I suppose, nothing changes.

Well, no, now the NPCs all complain about feeling crowded and their fairly spacey rooms are insufficient for them to achieve their "so much room" mood (which wasn't a thing neither before the update)

I hope at least the "crowded" bit gets checked because because with the 20% mood buff for likes and dislikes makes things more important now.

Thank you for your time.

This is likely because although the NPC limit was raised*, the detection range was also increased. So they are probably noticing new NPCs who weren't considered "neighbors" previously.

I can confirm this bug. I tested this with only 4 NPCs in my world by killing all the others and invalidating their houses. 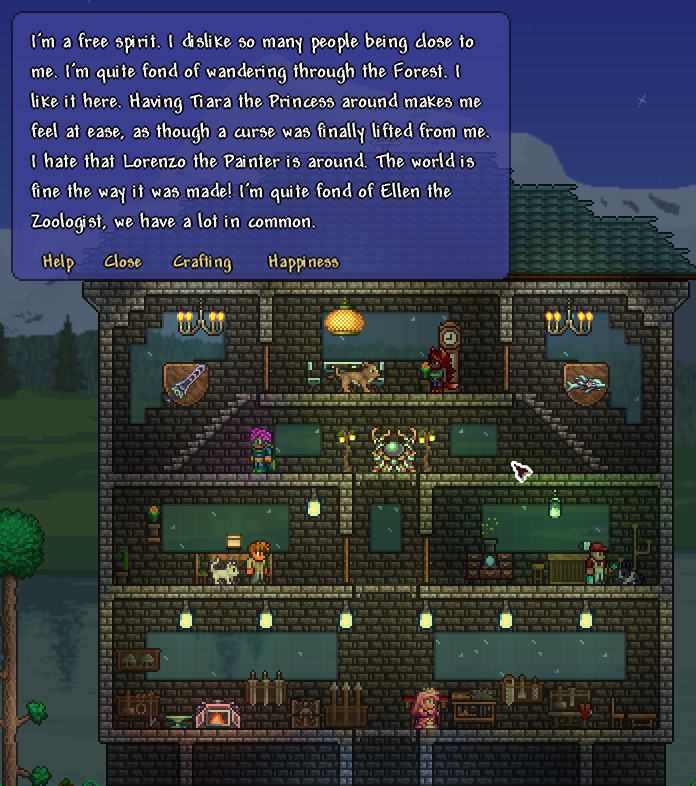 It is the same for me, with four it is already crowded.

The entire happiness mechanic is awful - all it does is ruin *everyones* towns a unless they are made in a *precise* way. What is the point of a sandbox game when there is only one way of putting NPCs together?

I honestly believe this is was a bizarre anxiety breakdown reaction to Covid and the entirety of Terraria has been forced into social distancing!

I think that the phrasing in the changelog might be slightly misleading, as it seems to imply (upon rereading it) that it doesn't start until AFTER 4, which would be 5. I'll probably go back and rewrite the changelog entry to be more clear there.

As for the rest, ManaUser is on the dot that in your case, it was likely the NPC detection change causing this, which is likely to be reverted (the change was originally made based on player feedback that NPCs had to be too crowded together to count as neighbors, but apparently this is even worse).

Leinfors said:
As for the rest, ManaUser is on the dot that in your case, it was likely the NPC detection change causing this, which is likely to be reverted (the change was originally made based on player feedback that NPCs had to be too crowded together to count as neighbors, but apparently this is even worse).
Click to expand...

Does it have to be a single search radius?

Option A: There can be a clear distinction between crowding and close enough for like/dislike interactions. Old radius can be for crowding, new radius would be for like/dislike.
Option B: The new npc search radius could count as nearby NPCs only when the 3 nearby slots are not full. NPCs within the new larger radius won't be seen if there are already 2 closer NPCs.
Option C: The new radius only adds a single NPC to the nearby NPCs list and only if the old radius had none. Basically lonely NPCs will seek out at least one NPC to form a town, enabling more spread out builds.