We all know about the Enchanted Sundial and its ability to speed up a day to the next dawn (though not everyone may have one, depending on how much they like crate-farming). I propose an expansion on this concept, with a number of time-based items/tools stemming from a basic item: the Enchanted Hourglass.

The Enchanted Hourglass, the main component for these items, can be bought from the Wizard while in Space for 15 gold.

The Hourglass then can be crafted into different items:


The basic Hourglass can be placed as well, where it will have sand slowly fall into the bottom half before inverting itself. Activating it tells you precisely how long it's been since you last activated it.

The Hourglass and its crafted descendants should all be Skyware-themed in appearance, except for the Cosmic Hourglass (since the unexplained Skyware aesthetic of the Enchanted Sundial was weird to me).

I hope people like this! I personally love time-based effects, and I love Terraria, and there was just so much untapped potential in the Enchanted Sundial that I wanted to explore some of it. The crafting methods are generally re-balance-able without too much difficulty, and I tried to make things useful while not (excessively) overpowered. Please let me know what you think! 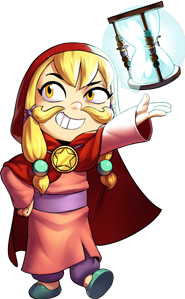 Excellent suggestion, not sure if the combat effects fit thematically but the accessability is much appreciated as the Sundial needs reworks.
T

Don’t see why not, as long as the duplicated debuff lasts longer (10s?)

I remember reading somewhere that Slow is impossible to implement for enemies in Terraria. Something about it being incompatible with their pathing? Other than that, these all sound like excellent ideas. (Though my heart is mainly in it for the furnitures you've suggested. A time-freezer and a moondial? Yes please!)
M

ThatRandomBuilderGuy said:
Don’t see why not, as long as the duplicated debuff lasts longer (10s?)
Click to expand...

I suspect OP is thinking of Midas, but... well, doing that for a post-moonlord weapon... with 30 damage and no class bonuses? You might as well rename the item to the Cherry Tap. ;-)

By comparison, I suggested giving the Amber Staff Midas -- that's 20 magic damage pre-Hardmode, but even that's going to be a cherry-tapper, because it's not really available until well after those staves are otherwise obsolete. I only suggested that one to give the Amber Staff something reason for existence in later pre-Hardmode when you can actually make it. (Once you go to Hardmode and get gold dust it joins the other gem staves on the trash heap.)
You must log in or register to reply here.
Share:
Facebook Twitter Reddit Pinterest Tumblr WhatsApp Email Share Link
Top Bottom