Tmodloader creates 4 basic characters that I cannot use, the cloud system isn't working, I can only see my saves in offline steam mode, Game freezes when I press play on the new created character. The sound is glitchy, background is running slowly

From the tModLoader Discord Server

There currently exists an ongoing issue between TML and vanilla in Steam, in which Steam Cloud data would get randomly corrupted in memory, resulting in crashes and/or broken entries seen at player/world screens. It has existed for quite a long time, but became much more apparent since recently.
The issue can currently be avoided by either starting Steam in offline mode, or by manually moving data off of vanilla's cloud at the page linked below, and avoiding putting Worlds & Players onto the Steam Cloud in the meantime, both in vanilla and TML.
Link: Sign In (Requires logging into Steam.)
Click to expand...

Rijam said:
From the tModLoader Discord Server
Click to expand...

I tried that, but I don't care about the save files. I want to play multiplayer with my friends. And in offline I can't do that. Can you think of any solution?

You can turn off the Steam Cloud setting for tmodloader. 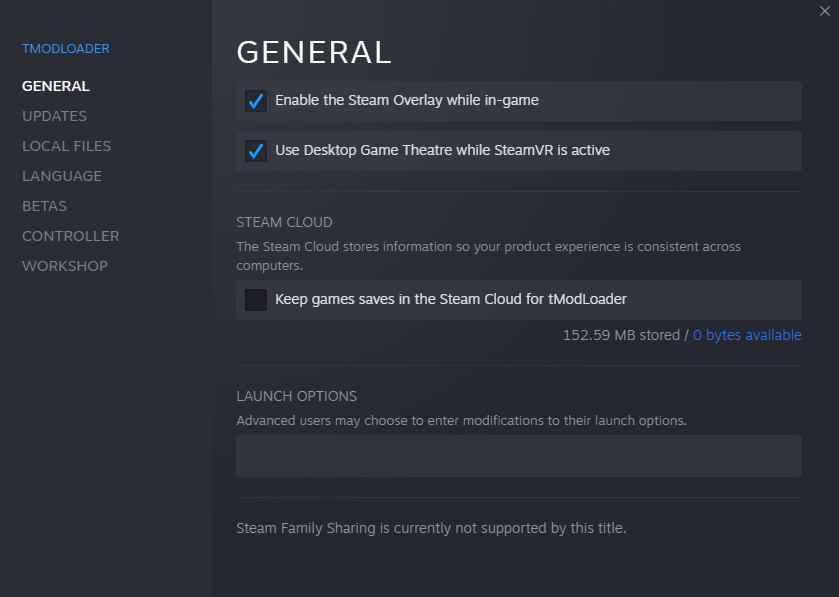 look, i have 0 bytes and you have more than 152.59. how can i see the exact location of the files, so i can delete the saves and try to see if it will work
P

i have this type of new characters. i stopped the tmodloader sync and deleted the game from my library(tmodloader) then reinstalled it. i had my old characters doubled, and the doubles transformed in this type of characters. at least i was able to create a new one and open a world. i'll take is as a win. if you can tell me how to get rid of these glitchy characters, it would help a lot! if not, its fine.
You must log in or register to reply here.
Share:
Facebook Twitter Reddit Pinterest Tumblr WhatsApp Email Share Link
Top Bottom