Whenever name is too long it creates 2 of the last words.

So for someone that needs help and Badly drawn Dark Matter their name is so long that on a phone it creates the last word twice. 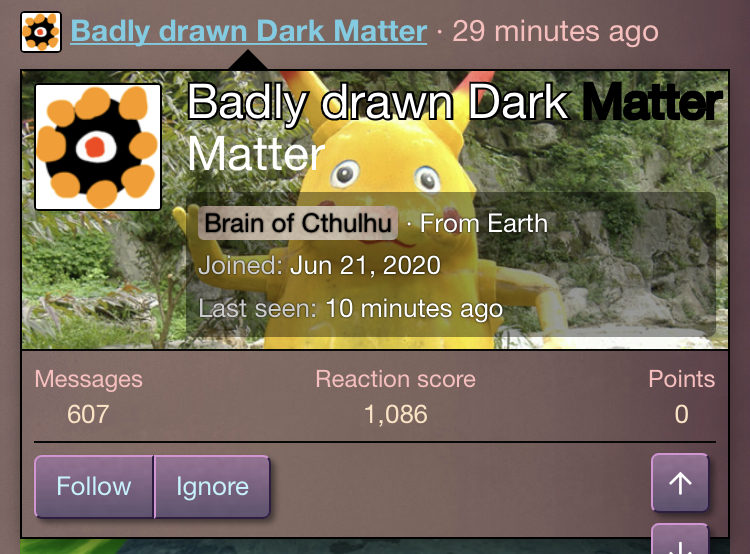 Judging only from your screenshot, I think the problem is a browser bug.

Every word in the name is rendered at least twice, first in black — possibly in bold, or possibly several times with slight offsets, so it seems "bolder" — and then again in white, without the boldface treatment.

For some reason the browser's rendering engine thinks the white, non-bold version is long enough to word-wrap onto the next line, while the visibly wider black version isn't long enough. [eta: In other words, if the black copy fits, the white one should also fit since it's drawn entirely inside the black pixels. The browser erroneously wraps the white copy but not the black one, while it should wrap both or neither.]

I'll try on an iPhone and a Galaxy and post results. If other forum members will try their mobile devices and various browsers, that could help confirm or rule out my proposed explanation.

Possible alternative explanation: Something weird in the site's CSS, if the white-over-black lettering is done in CSS rather than using a browser-based text effect. If that's it, I'm not up to analyzing and debugging it… that's what I do for money, not for funsies.

[edit] The Galaxy's display has enough pixels for all the words to fit on one line with plenty of room to spare. No help from this test. Waiting for the iPhone to charge enough to use.

[edit] Safari on an iPhone 4 (I think) shows a display identical to the one in your screenshot. Same with Firefox on the same phone.
Last edited: Mar 20, 2021

Staff member
Administrator
Bethany's initial explanation is exactly what's happening, but it's not so much a browser issue (in the sense that only specific browsers or specific versions of browsers would trigger it) as it is with Xenforo's code that provides the stroke effect to bannered profile names conflicting with Xenforo's adaptive layout code. This will trigger whenever any device's/browser's width resolution falls below a specific threshold and only if the name is long enough.

Because it is a bug on the forum providers end we won't be able to control when it gets fixed, but as soon as they do we'll apply it to our system and fix it.

Thanks, nice to know the answer to the puzzle.