The reason it's always hard to update my information tab on various websites is because my life is awfully hard for me to wrap my head around... or at least it is for me, eh. I mean, where do I start, eh? Did I miss anything extremely important while writing it, eh? What if I write too much and people don't even want to read it because it's just a giant text wall, eh?

Nonetheless, I've decided I'll finally take some time to update this after like a year of procrastinating on it, eh. Greetings, I am Gawen, Your Friendly Neighbourhood Sweaty Procrastinating Betamon™, a name of which I began to call myself after one of my most developed role play characters, eh. I am currently going through the dangerous water of high school and consider myself a writer (though the only piece of writing I've ever published outside of role playing is a long forgotten fan fic) but it doesn't really show much at the moment due to the fact I'm such a procrastinator... someday, it'll happen again, I assure you, eh.

I have been diagnosed with high functioning Autism and ADHD, eh. I have a twin brother named RavageTheSavage (who obviously also has an account here), and here on the forums my role currently is sort of just as a lurker... specifically on my own profile (I mean, just click my recent posts tab) but I'm quite active and not leaving soon, eh.

Just as a warning, I'm also somewhat depressed, eh. Though it doesn't show that much and I try to keep conversation topics away from that, as well as trying my best to not be depressed, eh. Seriously, being depressed sucks, eh. There's nothing to gain from it, eh. Don't be depressed, kids, eh. And as such I'm also kind of lazy, and being a procrastinator is what has made my life that somewhat bad in the first place, eh.

I suppose you could call me nice, eh. Usually I have something against being salty towards other people and because I've this the only anger you'll usually see from me is passive-aggressiveness, eh. I'm also extremely empathetic, which means I put myself in other people's shoes a bit too often to the point that I can't truly get angry at them, eh.

A few facts about myself, eh:

-I can type at 40 WPM with only my index finger on average, eh.
-My favourite games include TF2, most Nintendo games, Digimon, Undertale and Five Night's at Freddy's, eh.
-That being said, I consider myself part of the FNaF fandom despite what I might imply sometimes, eh.
-My family owns four cats, and I used to have a fish before it unfortunately died within two weeks (RIP in peace Permafrost),eh.
-I thought that I would have a lot more things to put here, eh.
-Writing this was easier than expected, eh.
-I think, eh.
-Probably was, eh.
-Why are you still reading, eh?
-Am I that interesting, eh?
-I am a fish, eh.
-My favourite colour is this shade of green, eh.
-I am also
Australian
haha
got you
just kidding
maybe
its a mystery

wow i did it
i mean i still think this is totally wrong but i did it
Edit: wow what do you know i forgot to add in my favourite colour of course
Shhh, let's pretend that isn't true...™

Appearance: Despite Lloyd's personal opinion, his appearance isn't really all that impressive. He doesn't have muscle or anything like that, but it doesn't stop him from convincing himself that he has an air of 'epicness' on his side. He is a slightly tall boy, about 5'7, with a decent complexion and messy brown hair that has a slight hue of yellow to it; his hair's original colour (Blond). Emerald green eyes are his most prominent feature, vast stretches of jungle and plant life fixated within the being of a person. Normally, he wears a hoodie speckled with that of military camouflage, black jeans, and a white T-shirt underneath. He also has reading glasses, but he detests using them.

Personality: If there was one word you could use to describe Lloyd's personality, it would be unrealistic. Before moving to Japan, Lloyd was depressed because he was worried about his father going to war... he still had friends and the like, but there were times when he would just sit in his room, staring up at the ceiling and thinking, blankly.

Upon moving to Kage Nomu, however, he decided that would have to change, 'deciding' to become carefree, thinking that it may make him look cool, and, more importantly, prevent any worrying about his father in the army. He takes almost nothing seriously, and views the Digimon invading the world as nothing really... important. They hadn't touched him, right? The troubles in the world are often exaggerated in his mind. He is easy to get along with through his barrage of jokes, but he tends to not think about anyone's feelings before saying something.

He knows when he's offended somebody, however, and this causes his personality to switch constantly. When it comes to Digimon, he knows almost nothing, other then they're super cool.

Digimon's personality: Unlike the majority of his species, FanBeemon - or NinjaBeemon, a nickname which (will be) given to him by Lloyd, has a rather cold and serous personality as opposed to the cheery 'get along with everyone' personality. He came to the human world with thoughts of rebellion, and to prove a point, and views most people who help him as 'allies' rather than friends, and doesn't care what happens to them.

He and Lloyd are almost complete opposites, which makes working with each other rather difficult. NinjaBeemon was, at one point, a 'fan' of the Digi-Destined, but the recent events leave him confused and and lonely, as the ones he looked up to are now aiding the Chessmon Empire that he, personally, finds evil, and them making war on the human world is just proof of that.


"This had better not be like the time when I was trying to find 25 cents..."​
Lloyd was one of those individuals that you would generally refer to as normal. For most of his life, he lived in the United States, with his mother, where he went to school and the basic things like that. He was pretty average... and had a decent amount of friends, those of whom helped him discover a sport that he spent most of his time practising and enjoying: soccer. Given these traits, however, it's not like he didn't attend class like the normal person, in fact, in some courses he most definitely excelled.

There was only one thing missing from Lloyd's otherwise normal and perfect life. His father and mother lived together with him until he was about four, but it was then that his father couldn't support them with the money he was getting. He told Lloyd, who was naive at the time, that he was just going away for a while, but in truth, he'd actually gotten a job at the army.

Sure, he came back home for a few days occasionally, but at that point, Lloyd was forced to create only a relationship with his mother. Eventually, Lloyd figured out where his father had gone, and with that, two new feelings developed within him. He kind of wanted to know what the army did, so he developed an interest in it and all things law-like (even if he didn't fully understand things such as court), but he also felt lonely, and worried that his father might just never come back.

Which is why Lloyd had been enveloped in that of a cold and mistrusting personality. He stayed this way until he was 14.

It was an average day. Lloyd was walking downstairs, ready to get to high school like he always was, when he found his mother on the phone yelling at somebody. At first he was worried, but never put too much mind to it afterwards. When he returned home that day, he was immediately met by his mother, who told him that they were moving to Japan. When he asked why, he always got the same answer.

He was sceptical and stubborn at first, refusing to go and continuing his normal life for the next three days, where he pondered what she meant. Maybe it was about his father. Had something happened? Deep within himself, he knew it was true, but he refused to acknowledge it. This got him somewhat depressed, and eventually, he accepted. He needed a change of scenery.

Luckily for him, he'd been learning a bit of Japanese, but he still needed to learn a bit when he arrived at Kage Nomu. He was immediately put within a school by his mother, where he continued to remain depressed. The change of scenery wasn't helping. And he had no friends in this place. So, he decided to try to pt the feelings behind him, developing a new, cheery and naive personality, dressing in ways that he thought make him look cool and the like.

This was integrated into his normal life, so much that he forgot what he was like before. It helped, but not enough for the coming situation, when the Fire Nation attacked the Digimon took over the world. His opinion on it was neutral, as after everything happened, the Digital lifeforms (he didn't actually know they were made of data...) seemed to have no interest in harming people further. But, thoughts of rebellion and badass-ery soon clouded his mind as he kinda dreamed of being some hero that would drive them from the land.

Fresh: Pupumon
In-Training: Puroromon
Rookie: FanBeemon
Champion: Waspmon
Ultimate: CannonBeemon
Mega: TigerVespamon
Burst Mode: (None)
With that out of the way, here's a few random things that I thought I would put here!

I find it scary that a 'What Pokemon are you' quiz gave me the closest description to my personality in real life than any other. 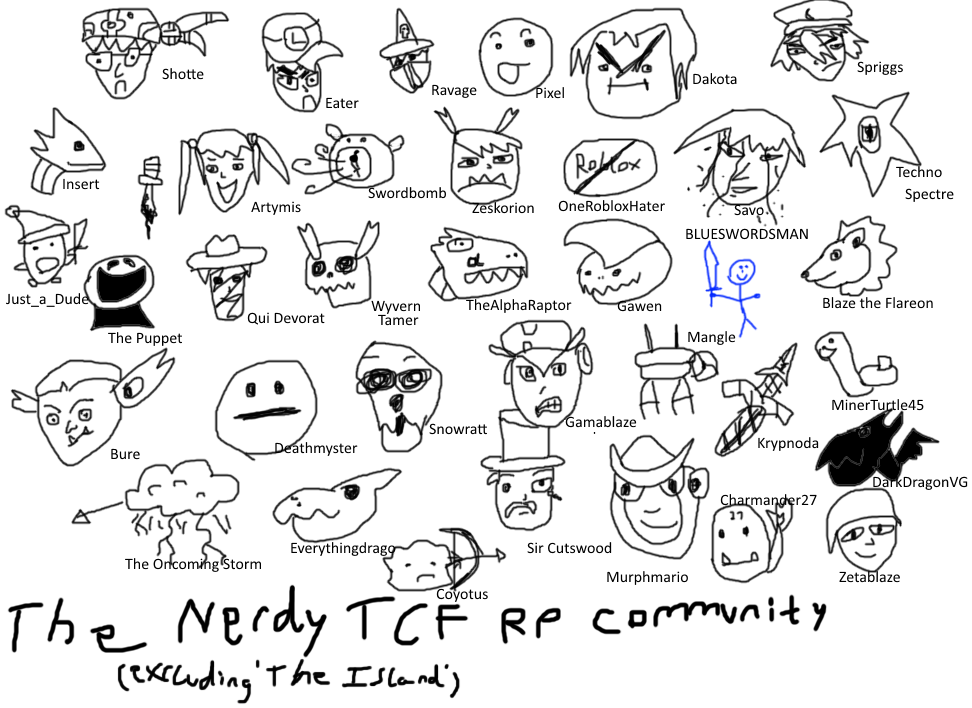 Credit to Shotte for the list of the 'Nerdy RP Community'! 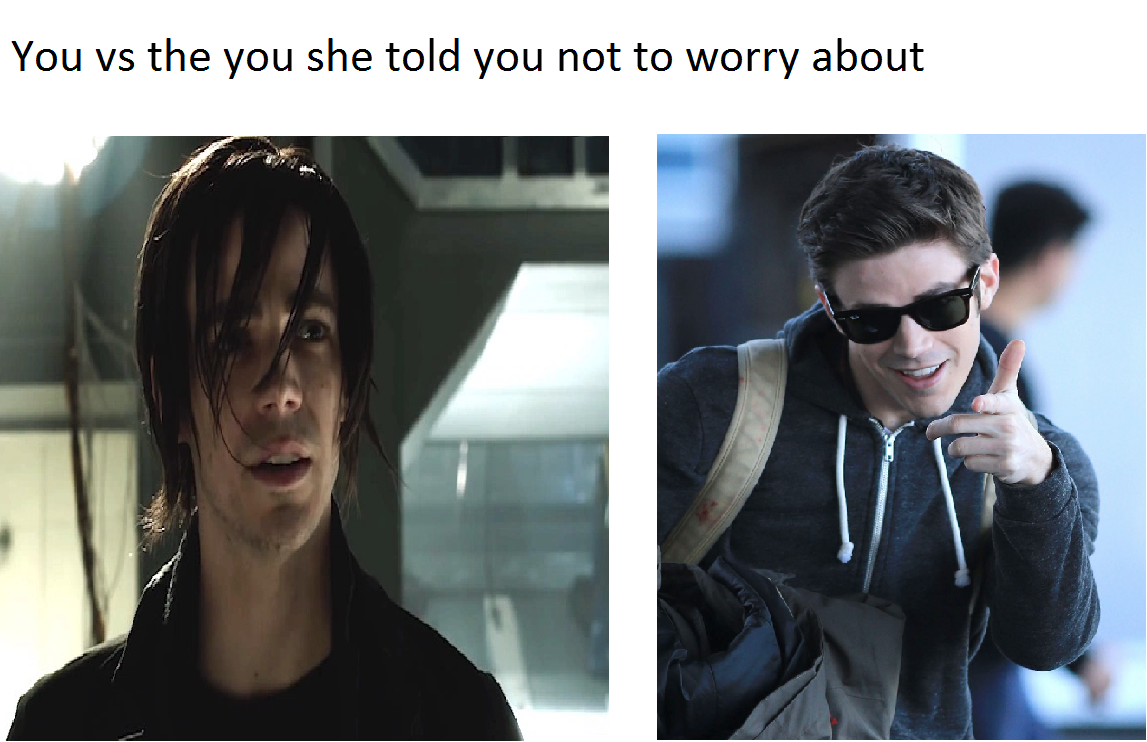 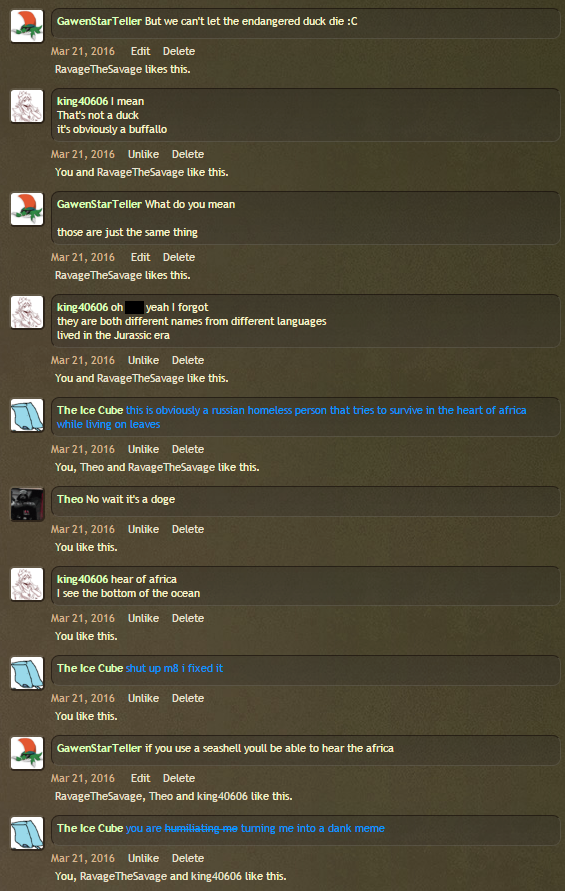 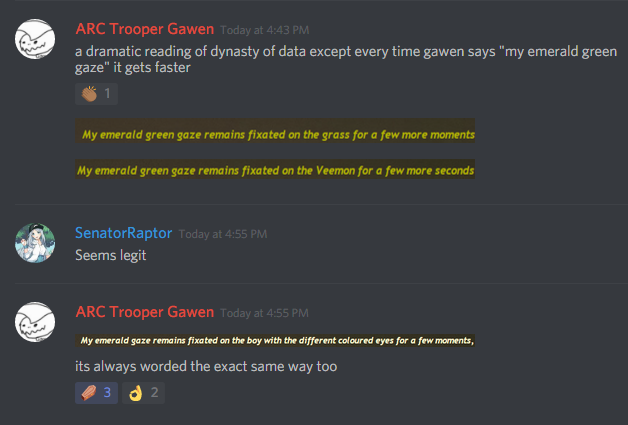 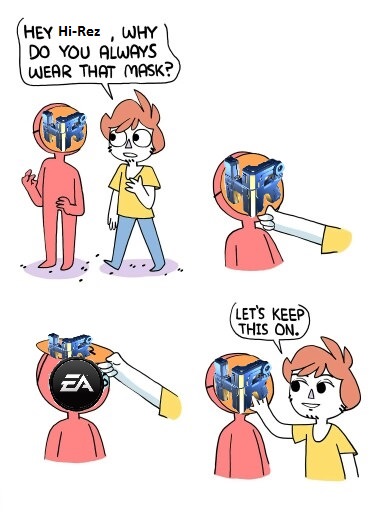 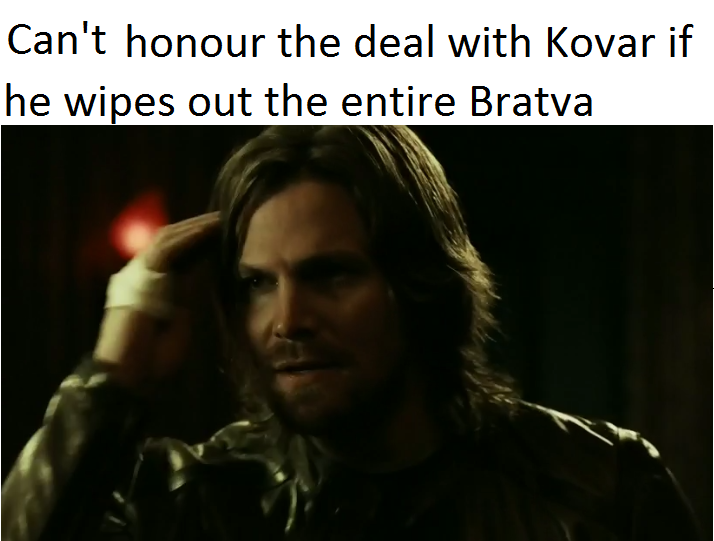 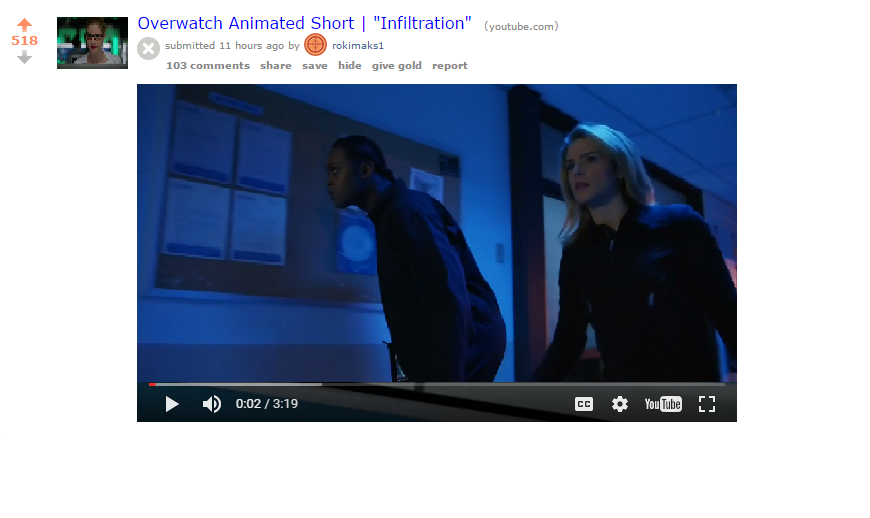 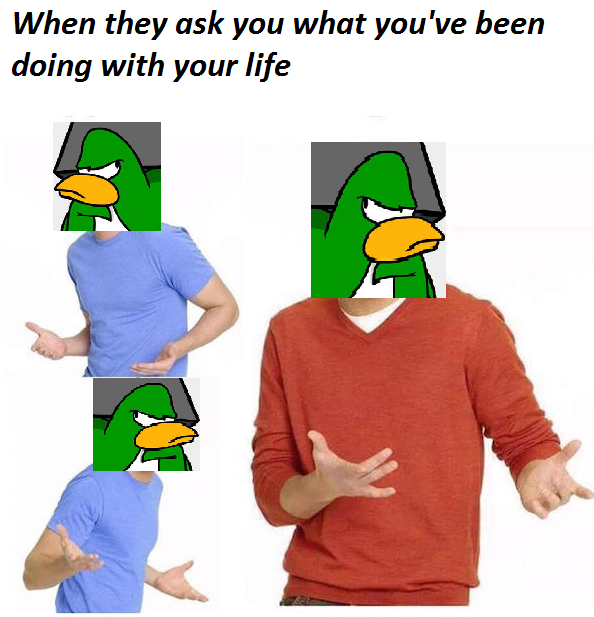 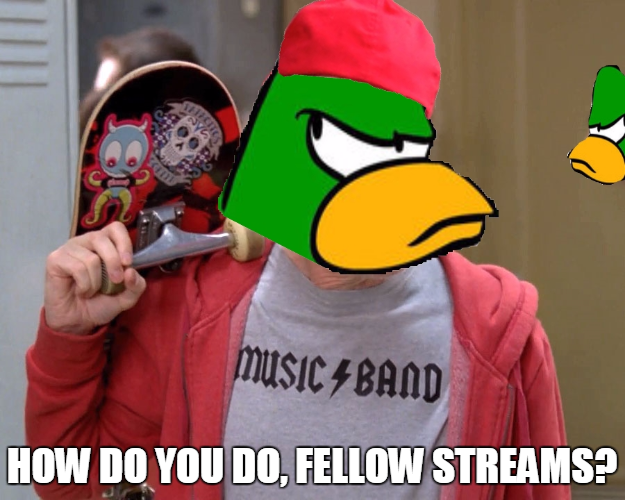 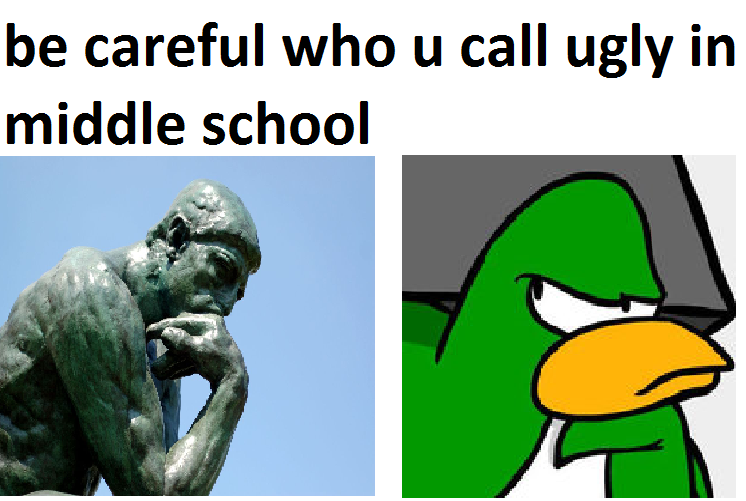 "This is not a cannon" - Swordbomb

"Someone finally put it into words for me recently: Edge is darkness without substance, darkness to try to look cool. There are things that are dark without being edgy, but this? Mmmmmmno." - MolochMekkane

"Well in future I'll just remember that Ravage is so white that he could be used to reflect and focus a doom laser in a James Bond film." - Manson

"If you ask Rick Astley for his copy of the movie UP, he cannot give it to you as he will never give you up. However, in doing so, he lets you down; thus creating the Astley Paradox" - Buffling


My Suggestions
More Mimics: More Mimics!
The Crowbar: The Crowbar
Opening and closing the spoiler at the top of my signature will allow you to see the rest of it.