In protect mode, the position they will use to check distance with monsters will be based on you.
That means that whenever in combat, they will try attacking monsters close to you, instead of themselves.
Yep, It definitelly needs a better name, but couldn't think of better ideas haha, so Protect mode is it.

Mounting seems to be working correctly 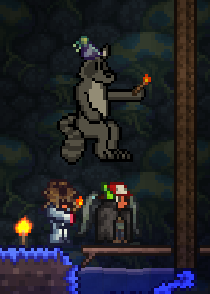 I actually wonder how you managed to do that.
R

Sorry for taking too long with the update: Not only I'm trying to work on my own game project, but also have been revamping some character sprites.
Anyways, you can see part of the result here:

Nerfed defense bonus from the npcs with gem boosts.
Underground bounty targets will no longer spawn or be triggered in the dungeon.
Reduced the travel distance you need to take with the companion, to complete their request.
Changed the name of the seasons.
-> Summer => Safari
Autumn => Harvest,
Winter => Hibernate
Spring >= Blooming
Fluffles can now haunt npcs, terraguardians and players around where she's idling.
-> Yes, you can ask her to stop haunting someone, but I can't assure you that she wont do that for long.
-> You can also ask her to mount the back of someone on your team, if she's your follower.
Added notifications for when quests starts or ends.
Added Stay quest to the mod.
-> Bree will trigger it depending on friendship level.
Nerfed Glenn's recruit npc spawn rate. He should spawn easier now.
Liebre's recruit npc will no longer have ascending spawn rates depending on times you met him.
-> That will definitelly make it sure that you'll be able to recruit him.
-> He can also now be found during the day.
Rococo, Blue and Brutus got sprite changes.
-> One of the changes is that you can now see their eyes.
Vladimir will no longer try picking up someone, and neither Fluffles will try to haunt someone if they're speaking with the player.
-> Fluffles was actually giving me on the nerves, though.
Companions will no longer speak about things when they're asleep.
Vladimir will no longer pickup Large or bigger companions.
The Merchant now sells Birthday Presents.
The bounty target will no longer haunt you after you killed it.
Trying to race against the Cheetah Guardian will now clear the Frozen debuff when the race starts.
Added Bash the King! quest to the mod.
-> Sardine will trigger it depending on friendship level.
The sprite changes on Rococo, Blue and Brutus aren't only restricted to eyes. I had to fix some issues with their necks, some got changes on their physical body too, and I also tried changing and fixing some animations that wasn't good. Some animations like 2 handed attacks I didn't really messed much, sorry to disappoint.

Beside that, bounty targets will no longer have absurdly high defense, so your character can actually cause damage to it. Some bug fixes and QoL in, and also, Sardine and Bree quests were reimplemented. Now you can unlock Sardine's outfit, and also unlock removing Bree's bag. I hope you got her summer outfit first, or not, we'll see.

Well, It's planned to be many more changes on companion sprites. I wont overhaul all companions: Sardine and Alex, will be two I wont be messing, since they don't really seem to need revamp, unless changing their ears design. Sardine and Bree were never intended to let you see their eyes, so I wont be messing with that. If that ever happen, will be through some animation frame. Anyways, that can help on theorycraft.

Well, I hope you guys have fun. And also, tell me what you guys think of the revamp.

Nakano15 said:
I actually wonder how you managed to do that.
Click to expand...

I used the order system to try to mount on Rococo but it seems like I told him to mount me instead.

"My Back is broken now"

That's bizarre, because large companions will only mount on the player back if they're at a younger age. Also, he looked waaaaaaaaaaaaay off the player shoulders in the image. I think it was side effect from the time and aging system change, which got fixed latest update.
R

Mount-wise, yes. Hardly you'll see a large companion mounting on your back, since they have quite some age since start.
Maybe Cinnamon will, I don't remember.

Guardians outfit options not fully working.It seems affected only quest related outfits,like for expample bagless Bree.But option still unavaiable
That also count for Sardine,Blue and Brutus,their quests was complited long time ago and outfits was unlocked,but it's locked how.Maybe they bugged when you added quest window.

I did changes to the way their requests works long ago, so some outfits are not acquireable right now.
Bree and Sardine outfits are acquireable though, but you will need to do some quest they offer to you.

Changed mod icon.
Fixed a softlock that would happen if you ask Luna about the companions living in your world.
Outfits from Brutus and Blue can be unlocked if they pass friendship level 5.
-> I don't think I'll add quests for them on this version of the mod.
Bree and Sardine outfits will now correctly be unlocked after the quest is done.
Increased the maximum number of extra companion followers to 8.
-> Alongside leader, you now can have 9 companions following you.
This doesn't means that the mod is released on 1.4 update, btw. Yes, I managed to release a mod for it, but this mod will actually need to be remade
for it to work on 1.4, even more since I want to try something different on it.

By the way, since I'll be trying to port the mods to 1.4 update, I made outfits previously acquireable from requests, acquireable by reaching friendship level 5 with the companions. The reason I did that, is because I'll try recreating my mods on tModLoader 1.4. In case bugs surges, or I manage to do something cool like update companion sprites or stuff, I may end up launching update to this version.

Anyways, I still have to keep trying to make you guys impressed, heh.

I hope the update's cool, and good luck finding everyone on the mod icon. Taking a photo and zooming isn't cheating though.

Looking at new mod icon i remembered about one,green,very hard-to-find guardian.Quentin(green bun-terrarian)
He still in a mod? How get him? You didn't sneakly cut him between updatets?

It's still possible to find him, but like the other companions found where he's at, might be necessary to grind in the place.
I eventually find it because I use rpg mod to add leveling and stuff, but my luck isn't that great sometimes.

Damn, I need to play this mod again.

Go ahead. Might be a lot more different from last time you played, who knows.
R

I haven't played terraria in a little while but when I did, it was fun exploring and such with Blue. She is a good archer too. I'll keep adventuring with her when I play more terraria. Although the fact that every time I do a request for her she wants to kiss me, despite having a boyfriend is interesting.

RuneDaHooman said:
I haven't played terraria in a little while but when I did, it was fun exploring and such with Blue. She is a good archer too. I'll keep adventuring with her when I play more terraria. Although the fact that every time I do a request for her she wants to kiss me, despite having a boyfriend is interesting.
Click to expand...

Oops. Well, that dialogue of the kiss was made before Zacks arrived, but I never noticed that when reworking her dialogue.
Also, probably it's a kiss on the cheek. I think that's harmless.

Yep,totally harmless.Especially when you completed Zacks patch quest and say to him that it was your idea,not Blue's

Backrevol said:
Yep,totally harmless.Especially when you completed Zacks patch quest and say to him that it was your idea,not Blue's
Click to expand...