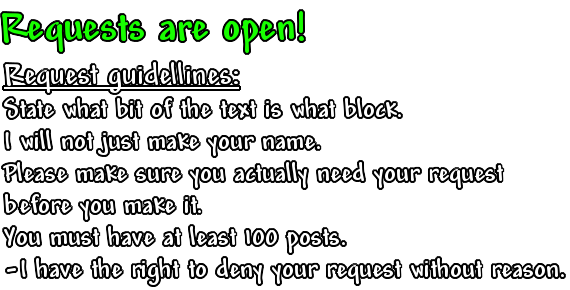 If you're interested, here's a video of me making @Pumpking's & @Typhoon's Fury's request.

If you where pleased with my service, please

Hope that is alright, if not, let me know c:!
Click to expand...

What do you mean by background? Do you mean underground biome?

I have a request!
Text: Pumpking
Theme: Spooky
I want to see how good you can do spooky. I can add a spooky tree myself, but you can if you want.

Yaaaay it's so great that you began already! Good luck with this all :3

A tip for you my friend, smooth the edges of the first and last letter of a word. It'll look better and more unique.

Staff member
Moderator
By the way, these take a while to make. So don't just go around requesting willy nilly. Before requesting, think: "Do I actually want/need this?"

(It's been a while since I gave criticism so..)
To be honest It doesn't look good, the dirt should be (like in game) merged with the stone. I've read DevilBro's guide before and I'm pretty sure he mentioned how you do that.
The amount of grass in some parts is much more than some other parts, it also look blocky in some corners.

EDIT: apparently it's not about being merged.. it's about that the outline is really dark
Last edited: Dec 26, 2014

What's the use of this post? I'm really curious.

Ok so... I've been slacking my art lately and I have art block.
So... I would like the letters, "DTi56" in the Overworld (Purity) biome.
That's all, I don't need the Tree at the far left.

It's for if he runs out of space in the OP, due to image limits.

EDIT: He already has 10 images in the OP, and he's probably gonna make a lot of logos, which means he might hit image cap.

Pumpking said:
It's for if he runs out of space in the OP, due to image limits.

EDIT: He already has 10 images in the OP, and he's probably gonna make a lot of logos, which means he might hit image cap.
Click to expand...

Hey darth can I have a Terraria logo where the letters are white and the grass with all those rainbow colours (you know what I mean) spelling out elemental!

Also, glad to hear there's a new workshop! Good luck on trying to catch up on both the banner workshop and the logo workshop.
Click to expand...

What do you mean by text: mushroom based?

Could I have "Joe" in the snow biome?

So you mean mushroom biome.

did you say corruption then?
H

I fear that some don't really need these and are just asking because why not.

It's still good practice of you