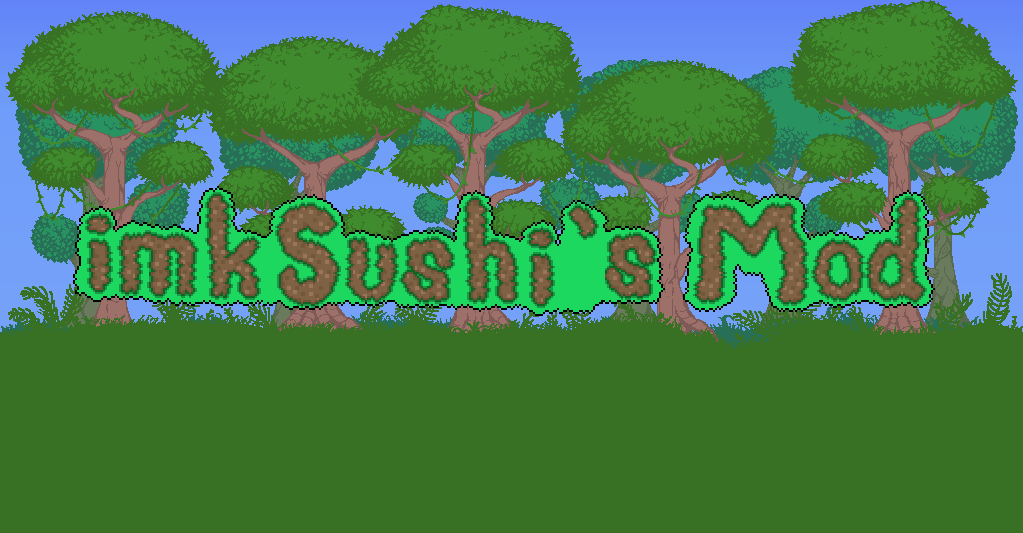 This is the Only, the Original, the Ultimate 'Extra Crafting Recipes' mod for tModLoader. It adds lots of extra recipes and a couple of extra super useful items.
My #1 priority is balance. If you see anything as unbalanced, please post about it on the thread.
This is one of the very first released mods for tModLoader.
One of the top 10 mods for tModLoader!

A Must Have Mod for any playthrough
Should be compatible with all other mods
Over a thousand recipes (1250)!
Now with even MORE Stuff!
PLEASE tell me what you think, I need to feedback to balance the mod even more.
Tell your friends and spread the word!

V4.3.1 is Released!
Please download the mod from the Mod Browser in tModLoader (or from below).
New Ideas are welcome
Download Count: 480000+
Mod Browser Position: 9th
Official Wiki: http://imksushismod.wikia.com/wiki/Imk_Sushi's_Mod_Wikia
Download tModLoader from: Standalone - [1.3] tModLoader - A Modding API
More of my mods at: tModLoader - imkSushi's Miscellaneous Mods

Also, thanks to the following Youtubers who have used my mods in a playthrough or the like:

If you find any more, please tell me, along with a link to a video of their's. Thanks.
If you have a bug, please post the following details:

The bug;
The mods used and their respective update numbers;
The version of tModLoader used;
How you came across the bug;
Is it:
Hardmode;
Expert Mode;
Multiplayer or Singleplayer;

And any other info that may be useful
Suspicious Looking Eye (after killing the Eye of Cthulhu)
Worm Food (after killing the Eater of Worlds OR the Brain of Cthulhu)
Bloody Spine(after killing the Eater of Worlds OR the Brain of Cthulhu)
Slime Crown (after killing the King Slime)
Abeemination (after killing Queen Bee)
Goblin Battle Standard
Tungsten Bullet
Pumpkin Moon Medallion (after defeating any of the Pumpkin Moon Mini Bosses)
Naughty Present(after defeating any of the Frost Moon Mini Bosses)
Truffle Worm (after defeating Duke Fishron
Treasure Map
Mechanical Worm (after killing the Destroyer)
Mechanical Eye (after killing the Twins)
Mechanical Skull (after killing Skeletron Prime
Lihzahrd Power Cell (after killing Golem)
Various NPCs sell various other items to spawn other bosses (including new items from my mod)
Tungsten Bullet - A Silver Bullet alternative
Multiple Tokens - These are used to craft many things. They drop in obvious places, except for two exceptions:
Swap Tokens can be bought from the Goblin Tinkerer
Fishing Tokens drop in the Ocean Biome
Biome Key - Made from other biome keys, and can be made into other biome keys
Cookie - 'cos who doesn't like cookies
Time Spheres - fast forward time
NPC Summoning Potions - Summon their respective NPCs
Healing Flower - Accessory that uses Healing potions when they are needed
Feeder Flower - combination of the Healing Flower and the Mana Flower
Ressurection Potion - Teleports you back to your latest death point
Angler Amnesia Potion - Refreshes the Angler's quest of the day
Meteorite Potion - Drops a meteorite on the world
Various items also spawn various bosses.
Use Jopojelly's Recipe browser to find the recipes (https://github.com/JavidPack/RecipeBrowser/releases)
This mod is intellectual property of me, and it is infringing my copyright to distribute or modify this mod without my clearly expressed permission.
Donations
I don't want to sound like a beggar, but if you like what I do (mostly coding for my Mod for Terraria at the moment), I could do with a donation. This money will go towards my life in general, i.e. help me pay for university, help me buy a house etc., so any donations of any amounts would really help me. Thanks.
There is a button to donate on my website (<link removed by staff>) if you want to donate.

Seems like a nice way to fend off RNGesus. One question though: What kind of items or materials can be crafted from their counterparts? Just wondering.

Daedalous said:
What kind of items or materials can be crafted from their counterparts? Just wondering.
Click to expand...

To answer your question, I have finished working on a complete list of recipes, which you can see above.
Last edited: Oct 2, 2015

The most interesting mod for 1.3 right now

Marc40k said:
The most interesting mod for 1.3 right now
Click to expand...

Thanks. I appreciate the support.

The latest Version is out-> The Soul Shields Update. Get it now in tModLoader!

This mod is really good, can save hours of finding keys and other items.

LanceVERA said:
This mod is really good, can save hours of finding keys and other items.
Click to expand...

It will be even better when I roll out 2.0.0 some time in the future. The difficult bit is coming up with the recipes. I will balance all the recipes for 2.0.0

Ok, keep up the work going then.

LanceVERA said:
Ok, keep up the work going then.
Click to expand...

I'm coding right now. I want the update done by the end of the week, but it probably won't happen by then. I have too much free time during various breaks.
Last edited: Aug 17, 2016

I'll put that in now.

imkSushi said:
I'll put that in now.
Click to expand...

And I'm still trying to think of more.

Shiny Red Balloon - White String, 10 Silk (you can change it)

Melly the WM said:
And I'm still trying to think of more.

Shiny Red Balloon - White String, 10 Silk (you can change it)

Trying to find out ways to balance making the double jumpers!
Click to expand...

NEWS
I hope to release here (not in the tModLoader Browser) the first prerelease for 2.0 by the end of the week. It will only have about 1/3 or so of the new recipes, and some of them are using items that you will be able to craft in the final release. Please tell me what you think is unbalanced.
Last edited: Oct 28, 2015

The souls use silver hammers in their recipe.

Melly the WM said:
The souls use silver hammers in their recipe.
Click to expand...

Ah! That was last update. I've got some cool crafting tricks up my sleeve
Here's a little hint at a crafting recipe: