Leinfors said:
As for being a reskin . . . I don't think making a brand new game from the ground up with a completely new engine, music, enemies, graphics, gameplay, and design direction can be called a "reskin" under any conditions.
Click to expand...

Is it a new engine though? It looks like it runs on the exact same engine to me. Yes the animations are nicer, the graphics are prettier and there are a couple new mechanics, but they're also still working on Terraria simultaneously, adding new music, animations, mechanics, etc... Basically overhauling it for the third time or so.

This is why I feel Otherworld is a bit of a cash grab. I'm aware they haven't released another title in quite some time, and I do believe they deserve support because I do love Terraria and I want to see it continue to be great. However, when they pump out the exact same game with a couple new mechanics and some prettier graphics... well that sounds like a game a whole lot of people love to hate on doesn't it? Shouldn't we hold all companies to the same standard?

I'm not saying in any way that Terraria: Otherworld won't be a good game. I'm just saying that I'm not impressed that their new title is nearly identical to their previous title.

It's advertised as "another take on Terraria", yet it shares most of the same basic premises. Carve out the land for resources, build up a base of operations, make suitable environments for npcs to join you, go kill monsters and stop the corruption from spreading throughout the world. That's Terraria already, it's not really that new of a take, just a slightly altered mission statement. If they had completely changed the way the game played, made it more adventure based than mining and building based, then I could see it in a different light.

I suppose to be fair it's not so much a cash grab as it is just a rather unprofessional way to go about getting more revenue in my opinion.


As for the Starbound comments, a lot of the game looks visually similar to Starbound. The way the characters hold and use their weapons, and the biomes all look very similar to those I've found in Starbound (I mean, c'mon, the dudes on an asteroid in that one scene). There are more things that remind me of it, but it's hard to put them into words at the moment as it's 5am at the moment and I'm on my lunch break. That said, there's nothing wrong with looking like Starbound though, that's not my problem at all (I've always wanted a space biome for Terraria). However the fact that it resembles Starbound so much visually just gives it less uniqueness, since let's face it; Starbound is Terraria in space.

I hope this better explains my concerns with the game.

OtherWorld seems so much different that Terraria, I am not saying this is a bad thing but I really hope it comes out alright! Good Luck developers!

Of course it shares a lot of common elements with Terraria - as it should in the 2D sandbox genre. Most of the things you mention fit in that.

What you haven't seen is how all of that works...or the lore/story.....or how the RPG and TD elements weave into that. Again, its a 2D sandbox game - so yeah, there will be some common elements that people quite frankly expect. I mean, it isn't Terraria Kart.

Probably should wait and see how that hybrid blends before assigning intent to the project.

As for the comments around cash grabs and a lack of professionalism....I would point to how we have treated our fanbase over the past several years as some pretty darned solid proof that Re-Logic is not in it for profiteering on the backs of customers. That holds true even down to the site you are on right now.

This has nothing to do with Starbound. Irrelevant.

Not trying to be rude, but I am being honest here. Re-Logic is about the furthest from the type of organization that would do "unprofessional cash grabs" as you can get. If revenue were our sole driver, we could have charged a minute amount - let's say a dollar - for either 1.2 or 1.3 and made millions. Something to remember when judging our intent behind things.

Hope that helps shed some light on things - we will look forward to delivering an experience that exceeds your expectations.

Would also like to add that TCF doesn't have ads too.
K

A masterpiece of music, I just can't imagine how good it will be the game,but I can tell you just one thing when Terraria Otherworld comes out: 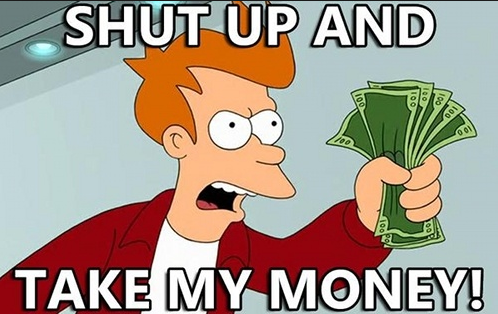 N1gh7mar3 said:
A masterpiece of music, I just can't imagine how good it will be the game,but I can tell you just one thing when Terraria Otherworld comes out:

Your image is broken :x might want to double check that URL, right clicking and choosing "Open in new tab" usually gives you the correct URL
K

Nike Leon said:
Your image is broken :x might want to double check that URL, right clicking and choosing "Open in new tab" usually gives you the correct URL
Click to expand...

Fixed it The image say: Shut up and take my money!