Good day to all of you. I'm fairly new here, so tell me if I need to add something more to this post.

With the new projectile pressure plate, you can make a dart trap trigger itself repeatedly. 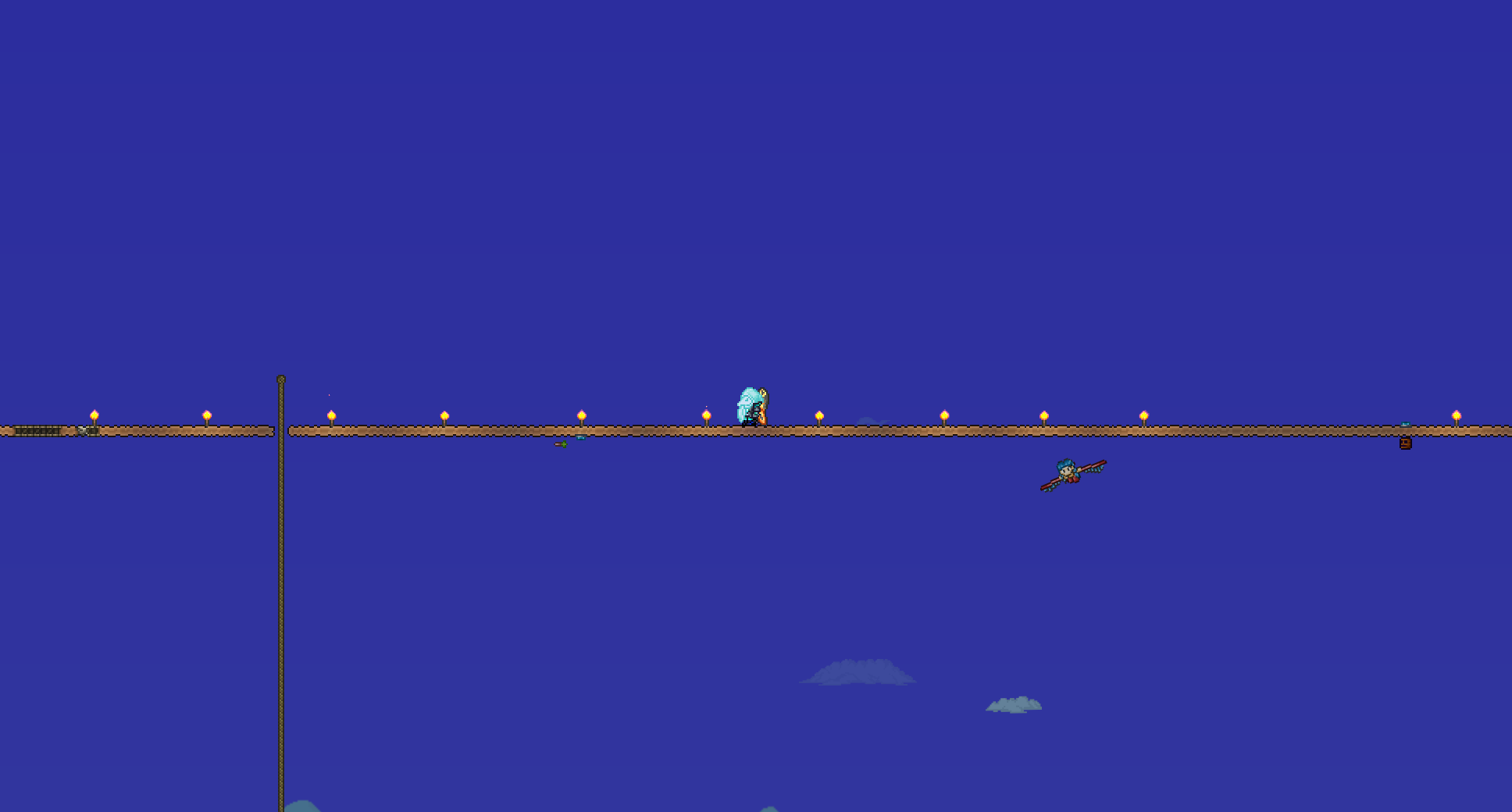 Above this text, you can see the dart trap on the right. There's also a pressure plate connected to a torch on the dart's path for it to trigger. 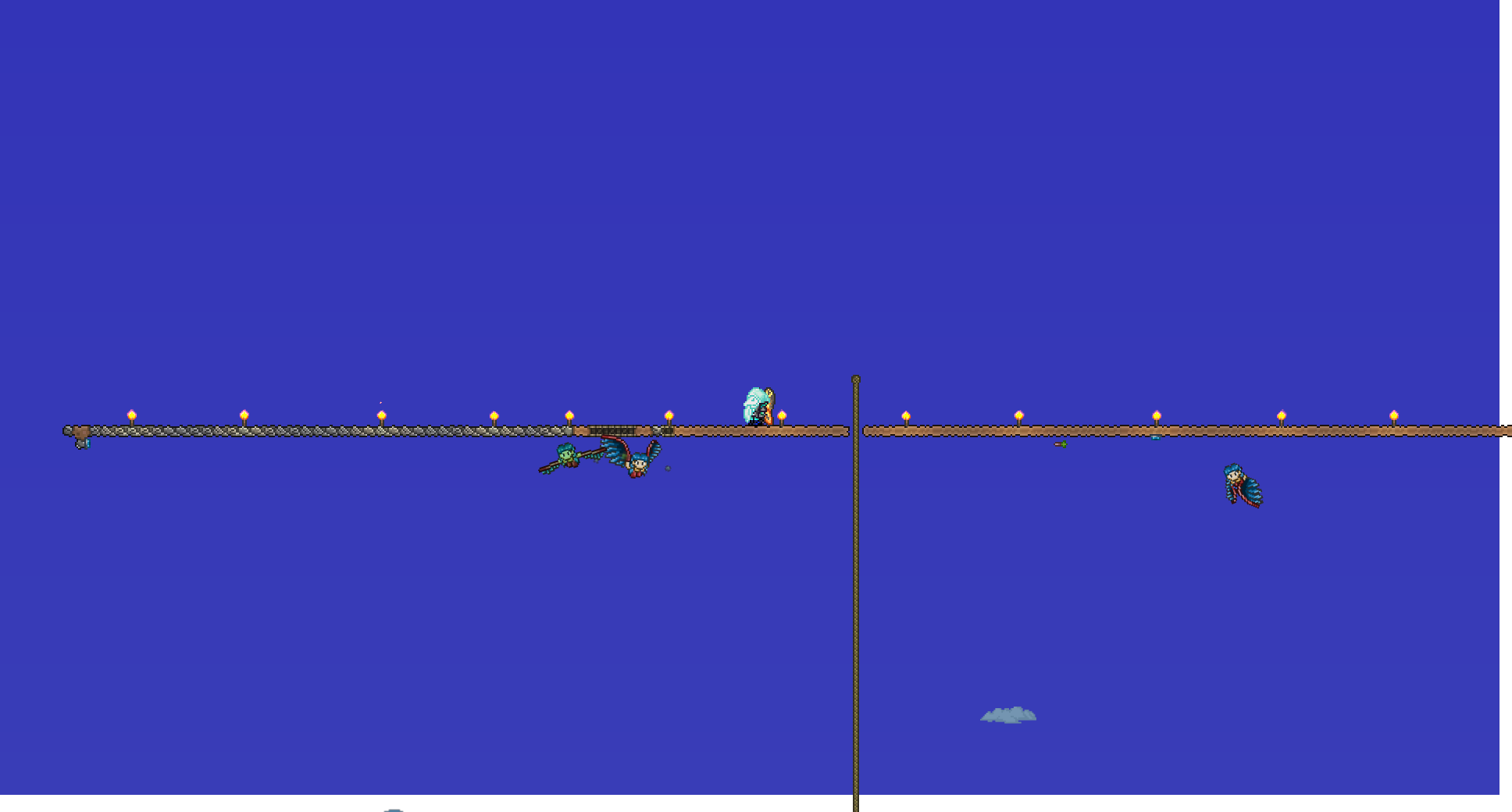 Above this text, you can see the pressure plate the dart hits to retrigger the dart trap. 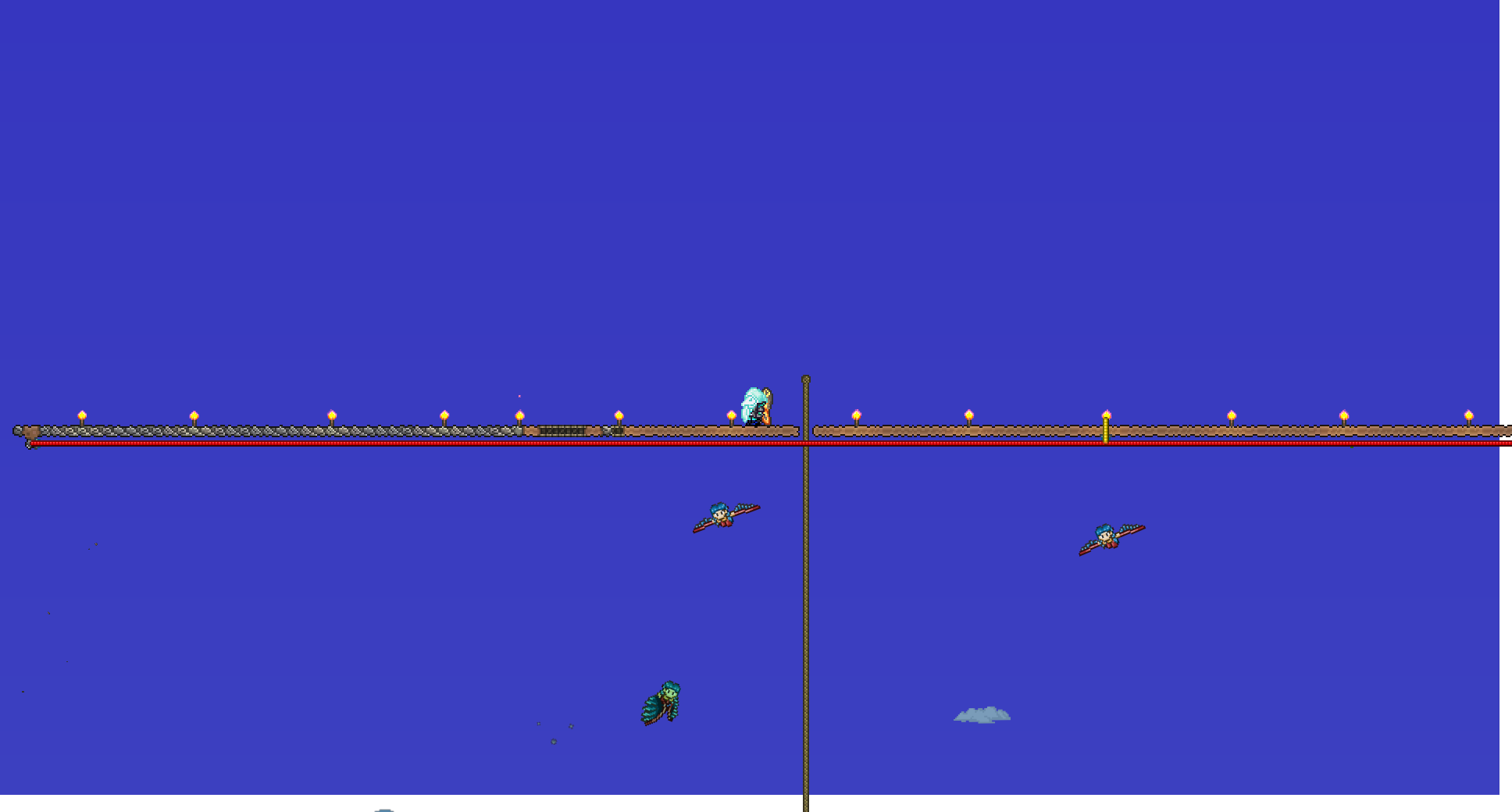 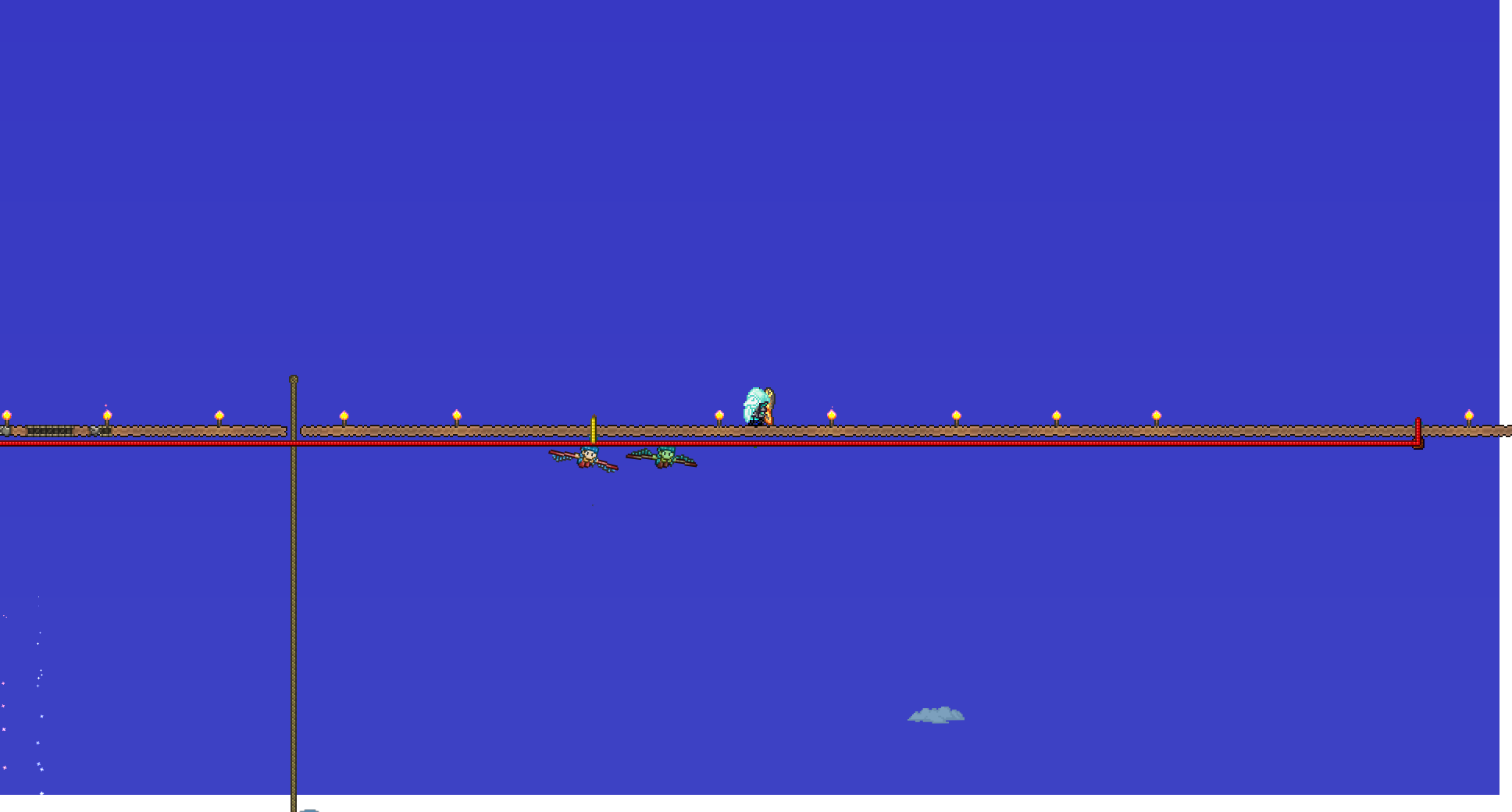 This system is built at the minimum distance of 150 blocks (300 feet for the sake of GPS), so the dart trap triggers every 3 1/3 seconds, which is the cooldown of it. This lets you make the dart trap fire as fast as currently possible, so if you have 150 blocks horizontal space near an arena or a farm, you can use this to make the trap fire at max frequency in a simple way. The dart doesn't seem to despawn (I went all the way to the ocean in a large world with this above spawn and it kept on working), so you can probably increase the lenght of it. As you can see from the torch in the middle, you can add pressure plates in it, which lets you trigger all kinds of things with this in a loop. A dart trap travels 45 blocks in 1 second, so 1 block in about 0,022 seconds if my math is correct, so it can trigger something every 0,022 seconds I believe. I'm new to this so correct me on this if I'm wrong.

So, what use is this, exactly? Well, as I said, the dart trap triggers at max frequency, which is once every 3 1/3 seconds. As I also said, it can trigger 1 pressure plate every 0,022 seconds, which I believe is quite fast. This lets you make an engine similiar to a hoik engine with a dummy ghost or a npc. This however can not move items, players or npcs. There may be more thing this can't do that a hoik engine can and there may be some things this can do and a hoik engine can't, but I haven't tested for those, and with Overwatch releasing tomorrow, I might not have time to. So feel free to test it.

One use for this system could be a boss fight in an adventure map. You hook traps and other mechanics into the pressure plates in this and it triggers them repeatedly until you defeat the boss or die. Once you leave the area, it could just block the dart's path to stop it, while a hoik engine would probably require more to stop it so that it can later start again (in case you die).

Great post, projectile pressure plates are amazing just for their usability in wiring, in combination with dart traps. Used this often for so many different reasons in the 1.3.1 map I made.

I'd add that if you want to save space you can use a normal dart trap as they travel slower, and you could make the dart go through water/lava/honey to slow it even more, meaning it doesn't have to travel as much distance within the cooldown time. I'm too lazy to do the calculations on the exact dimensions needed though

Using dart traps and liquids to slow it down sounds very useful for making the plates triggered per second be lower for whatever you may need that for. I'm not sure if I have enough time to test the different speeds so if someone can test them that'd be great.

Super, i could go ahead and test the regular as well, i already set up the system for it, i just have to switch the traps.
[doublepost=1464022076,1464021528][/doublepost]I just tested them, and found that both traps travel at the same speed, so my before math applies to normal dart traps as well.

Alright, thanks. Have you tested with lava?

Just tested it, i got the same 24 blocks/second, just like water.

Yeah, when I made my original rapid fire dart trap battery guide/video it was 135 tiles minimum distance for repeated pattern, on the 3 second trap cooldown. Since regular (and super) darts travel 45tiles/s (12 pixels per tick). 1.3 messed that up a little, of course, and now it's 150 tiles (over 3.33s).

But unlike real world friction, this slow down is much more like the the refractive index of transparent materials slowing down photons, though, since minecarts, darts, etc, resume their original, full speed upon exiting. This means that if you launch a bunch of darts from a string of traps all immersed in a liquid, as they exit they will become 2 or 4 times more widely spaced out. Thus you can make a plate/trap run (for a rapid fire engine) more spatially compact. (Birds are slowed down too, etc.)

Anyway, I just checked that my existing cooldown-juggle rapid fire engines could be retrofitted with teal (projectile) plates, in place of their existing button bashing (hoik, etc) engines. And seems viable, as expected:
Note that with just 1 teal plate the firing pattern seems to quickly start getting all bunched up, due to the not perfectly integer, not perfectly looped firing pattern. I'd be interested to see if someone can make a rapid firing engine that's more in tune with this new plate mechanism. Otherwise the old engine designs are probably going to be more efficient for space and number of wiring activations.
[doublepost=1464047971,1464043036][/doublepost]Oh, and here's a super-simple spear trap repeater:
3 is the minimum number of firing phases I could get with the spears. (I don't think they are slowed down by liquids.)

One thing to look our for is that your minions will activate the teal plates too, so can screw up the firing pattern and stop this kind of automatic repeater. Also, the only way I can see to stop it automatically, is to actuate some blocks to block a plate in the sequence.

Of course, spikey ball traps are super-easy to loop, just connect them all up to a couple of teal plates, below. Although, again, turning this off might be another issue! And it's no better than a 1s time, if you want to fire them all at once in a trap, rather than for making some clever firing pattern...

I tested a 24-block stretch of water with a dart trap firing through it, hitting 24 teal pressure plates, but oddly enough (using ZeroGravitas's new binary counter lol) i found that in those 24 blocks (1 second) the counter only hit 11, leading me to believe that there must be some sort of an activation cap for only 23/s. (The counter activates on every other pulse, and on it's first activation the torch doesn't toggle, it only prepares to toggle, but the first torch was prepared to light). 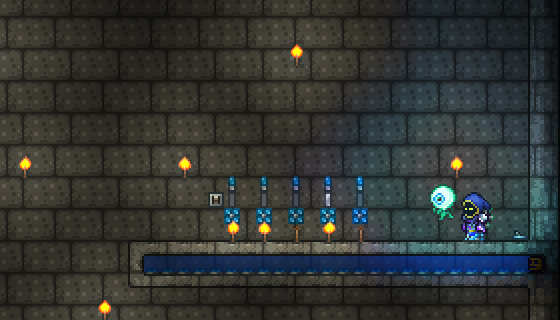 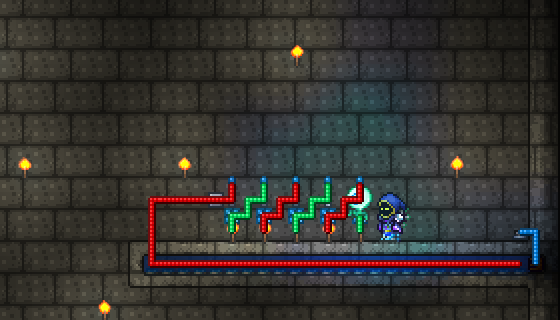 Even after doing some double wiring to see if the wire capped off there, i still got the same 22 activations/s. 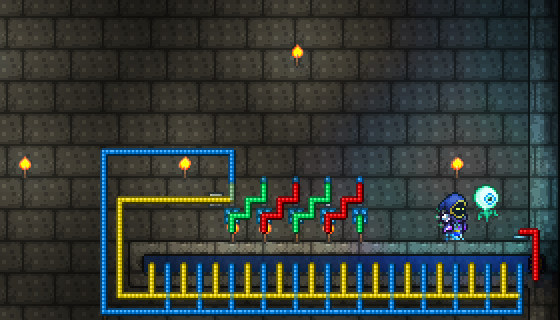 So the engine works almost perfectly, but oddly enough it only activated 22/24 times (i ran through this same test many times to assure that it only activated 22 times) and to be honest, i have no idea why. Anybody care to help me find out?
EDIT: I found out why, it technically activated 23/24 times, and i went to test air, and it activated 53/54 blocks that i placed down, and after removing the first pressure plate (next to the trap) it activated 53/53 of the pressure plates. The problem was that the dart trap must spawn the dart far enough away from itself that it does not collide with the proj pressure plate directly in front of it.