Willsb said:
Hey, I have been trying to change the sprites for town npcs and was wondering how you did it? I cant seem to get the texture pack to replace the townnpcs for tmodloader...
Click to expand...

the 1.35 package, want to do it for tmodloader
T

Willsb said:
the 1.35 package, want to do it for tmodloader
Click to expand...

It doesn't work through TMod, you grab the .xna files and paste them inside the images folder.

Finally finished with the new Previews here's a couple: 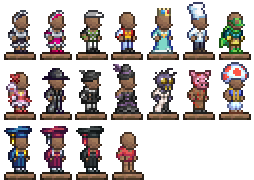 Willsb said:
the 1.35 package, want to do it for tmodloader
Click to expand...

Unless your going to make it work for T-Mod yourself, It isn't going to work with T-Mod as it wasn't made for it
which is what i though you were trying...

T-Mod isn't a requirement, and isn't listed as such nor in the readme
However People requested the previous version for 1.3.5 (so it's the oppesite way around)
as T-mod apparently makes 1.4 run as 1.3.5 or does it convert 1.4 back into 1.3.5?, no idea

and thous i don't know how to help you with such...
I would suggest you try and talk to someone more in the know about the current version of T-Mod

Making it for "Texture pack" feature on the other hand, is another thing

But that requires everything loads and isn't ignored...
like the Player character was in the "Experimental" Textureapack feature back in Terraria 1.3.4

and a few other things....
but that is something i will look into later, when i have made everything planned so far

or probably beginning with "wave 3" hmmm....