However, we are also very proud to announce the addition of second experimental feature, Texture Pack Support! Included in the 1.3.4.2 hotfix you will now be able to use native texture packs in vanilla Terraria for the first time!

Below, we are going to give each feature the space it needs to have a proper introduction, tutorial, and explanation, so keep going for more information! However, as a word of warning, these are experimental features. There are always possible risks when using them, and while we don't anticipate these causing any issues, we strongly encourage anyone using them to backup their world and player files. It takes only a few minutes to go to your Terraria Worlds/Players folder and make a manual backup. Its as simple as copy+pasting the entire folder to a separate, safe place of your choosing. If you keep these backups updated regularly, any risk of save loss is minimized!

1. To activate experimental features, you will need to find and open your config.json file. 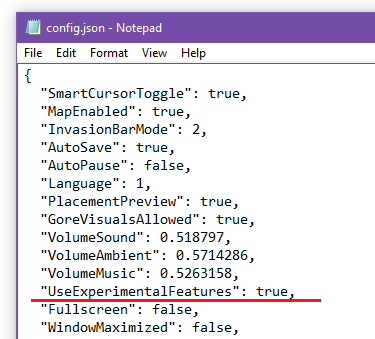 4. The next time you launch Terraria, these features will now be functional.

Texture packs, for those unfamiliar, are add-on files, usually created by players for themselves or others, which change the appearance of some or all of a game's content. This could include weapons, enemies, NPCs, furniture, even the player. This allows a range of options to a player, from as little as simple tweaks to an item or two, to a full, sweeping redesign of the entire game's art.

On Windows, Documents\My Games\Terraria
On Mac, Library/Application Support/Terraria
On Linux, $XDG_DATA_HOME/Terraria​
3. For the texture pack to be detected and loaded it must be named "Texture Pack.zip" and be in the specified directory above. On Windows, the correct name and folder would look something like this: 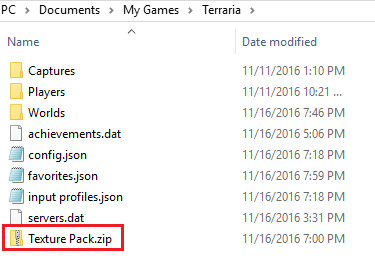 4. The texture pack needs to contain only an "Images" folder. In the Images folder, any texture you include will replace Terraria's texture of the same path and name.
5. Replacement textures should be saved as png, gif, or jpg. These are the image formats currently supported for this experimental version of the feature.
6. We've also included an example file here. The zip file contains some basic texture images, as well as a sample zip file (named Texture Pack.zip) which can be installed to practice and test out the feature. The test pack replaces Wood blocks and Wood walls, so you know what to look for!

World Seeds determine the direction and form a world takes when it is created in world generation. Under normal circumstances, all worlds are random because their seeds are random. However, we've now included an option for the player to choose the seed when generating a new world. Additionally, any world created while this feature is on will allow you to view and copy its seed. With this seed, users can generate worlds identical to the original form of a Terraria world. You can create your favorite world again, or share your world with others to explore on their own!


A. Deciding a World's Seed
When creating a new world, the very last option that appears before the world is generated will let you enter a seed. After deciding your world's name, this screen will appear:

B. Viewing a World's Seed
The world seed feature is, unfortunately, not retroactive. You will not be able to access the seeds of worlds created before 1.3.4, and even then, only those created with the experimental features set to "True".

You can determine whether a world's seed is available by looking for a seed icon below its name. It looks like this:

If you hold the cursor over the seed icon, the world's seed will appear on the screen. If you press the button, you will "copy" the seed, and can paste it into another window, or when making a new world. It should look like this:

C. Important Notes
One very important thing to keep in mind is that the world is not just determined by the seed, but the other options selected by the player when creating it. What this means is that a "Small" world will not be the same as a "Large" world, even if they have the same seed. For worlds to be identical, the following settings must ALL be the same:
- World Size
- Normal or Expert
- Corruption or Crimson

These features are, of course, experimental, and may have some odd behavior, so we'd love if you would share any issues, bugs, or feedback on these two additions with us in this thread! Right now, these are only optional features, and not fully integrated with the game. But with your feedback, you can help shape and improve these features for a potential official release in the future!


We look forward to your feedback and we hope you enjoy these features to their fullest!
Last edited by a moderator: May 8, 2018

Staff member
Moderator
Re-Logic
Also, snatchin this post up, because we may need it.
Last edited: Nov 17, 2016

I just wanna thank you guys for making these features a thing, because it's legitimately

ing amazing to have these options

Staff member
Re-Logic
Administrator
I am super excited for this new "Experimental Branch" of things. Allows the team to push some envelopes without compromising the core game - and for you, our awesome community, to help shape and polish how these new features evolve.

Steam servers must be slow as heck right now, this update hasn't reached me yet. Oh well.

These features seem incredibly powerful. I'll we'll have to see the full consequences of such features down the line, when more is known about them, and are considered stable.

Who knows, this could open the door for some other powerful features!

Like official modding support/API; changing the soundtrack; version choice, just like or similar to the old Game Launcher; etc.

World seeds pave the way for speedrunners to have static maps as well, which is pretty cool.

Texture packs?! Must...contain...excitement! I mean don't get me wrong I love Terraria's art style but it can be fun to mix things up too!

I see the fruition of Red's and the Dev teams dreams coming to reality! WTG Terraria team!!!!

Finally native support for texture packs! I've been using, and creating texture packs for Terraria for quite some while! This feature will make distribution much easier!

Ummm yeah this will be awesome. Endor will be remade and I'll be able to search it in a manner that did not lead to accidentally glitch killing TWOF way to erly. lol

ZyberBlood said:
Ummm yeah this will be awesome. Endor will be remade and I'll be able to search it in a manner that did not lead to accidentally glitch killing TWOF way to erly. lol
Click to expand...

What is Endor?
H

Texture packs? About time, are we gonna be getting the ability to replace sounds? Are Texture Packs in PNG format? Will we ever get a proper GUI and folder for texture packs if they do get implemented?

Neko-Chan said:
About time, are we gonna be getting the ability to replace sounds?
Click to expand...

I haven't heard one way or another about that just yet!

The practice/sample zip attached to the main post includes practice files which are png. I asked about more details about what other formats they can be in earlier, but I don't have an answer just yet.


Neko-Chan said:
Will we ever get a proper GUI and folder for texture packs if they do get implemented?
Click to expand...

Hard to say, but it would be quite nice. Most of our "config only features" end up in the menu eventually, and once the dust of 1.3.4 has settled, this sort of thing will probably be up for consideration. Right now though, this is purely for experimental testing, and that's the sort of thing that would come after this stage.

Leinfors said:
I haven't heard one way or another about that just yet!

The practice/sample zip attached to the main post includes practice files which are png. I asked about more details about what other formats they can be in earlier, but I don't have an answer just yet.

Hard to say, but it would be quite nice. Most of our "config only features" end up in the menu eventually, and once the dust of 1.3.4 has settled, this sort of thing will probably be up for consideration. Right now though, this is purely for experimental testing, and that's the sort of thing that would come after this stage.
Click to expand...

As a texture pack creator myself, the files in the content folder are .xnb files, which are quite difficult to deal with. I have to run them through converters to be able to edit the files. If PNGs will be supported, I can only say, that would make my job MUCH easier. It would also be nice to see an easier way to manage these textures from in-game! Here's another suggestion, allow fonts to be changed in-game, there are many fonts that look great in Terraria!

If only the texture packs could replace music... and add items...

Good to see that you guys are trying new things in Terraria.

Sir Dashie said:
If only the texture packs could replace music... and add items...
Click to expand...