Teal Pressure Plates are sometimes not triggered by Dart Traps

This is technically not a new problem in 1.4, but the situation has regressed somewhat. 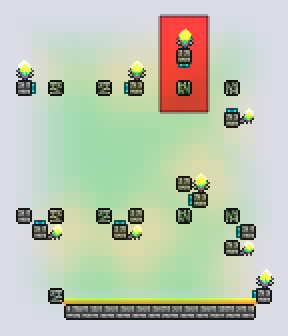 In the above picture, none of the pressure plates will actually get hit by the dart trap.

The first row of examples, where the teal pad is facing towards the trap, is happening because the dart actually travels past the teal pressure plate's hitbox after one update, ends up inside the tile behind the pad, and breaks. Before the 1.4 update, the setup highlighted in red actually did work. The darts fired by upwards facing dart traps were placed two pixels lower, so they were able to just about clip the top edge of the teal plate's hitbox.

What can be even more surprising, is the fact that the setup in the third row, with the honey, also does not work. I suspect in this case the spacing and the speed of the arrow line up just right, to result in the same effect as in the previous case. This means that setting certain configurations of dart trap delay lines will just fail for no immediately visible reason.

The examples in the second row also don't work, but for different reasons. In these cases the dart spawns inside the hitbox of the teal pad. This results in the teal pad not activating, since they require a projectile to be outside the hitbox before an update, and then inside of the hibox afterwards.

The weirdness of teal plates and darts traps have led to some interesting discoveries over at T-MEC: PC - [Question] Weird Mechanics of Dart Traps and Teal Pressure Plates
Essentially, it's possible to exploit the update order of darts to create gaps in the game's projectile array, and subsequently detect the creation of new projectiles, on a global scale. I understand, that this mechanic is far from intended, but it does give us the ability to interact with the game world more using wiring. (Which is an area I feel like is otherwise fairly lacking.) With the change mentioned three paragraphs earlier, regarding upward firing dart traps, setting up machines to exploit this mechanic has became a lot harder. I'm not asking the developers to support this "glitch" (though that wouldn't be unprecedented either), I just want to say, at the very least:

Teal pressure pads that are clearly placed in the path of a moving projectile, should always be triggered by said projectile.
Last edited: Sep 15, 2020