​
(Playing Through the Fire and Flames)

TerrariaMidiPlayer-1.1.0.2.exe
(The main executable. Dlls in the previous downloads are no longer required)
MidiSamples-1.0.zip
(A selection of midis playable without use-time modifications)
Terraria Item Modifier | Terraria Tweaker 2
(Different patches that allow item customization in order to decrease the use-time of instruments)

~ Previous downloads can be found at the bottom of the page ~ 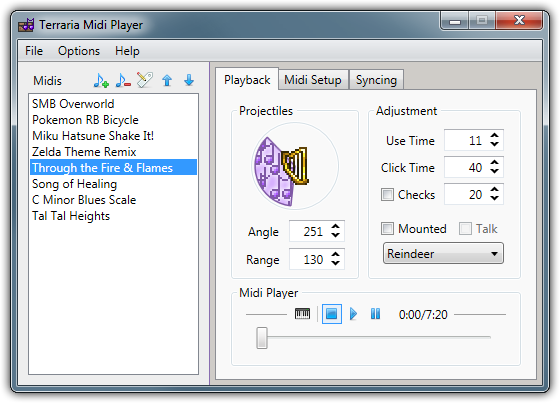 (Below is a 3-person performance of Link's Awakening's Tal Tal Heights, and Miku Hatsune's Shake It!)

The first major release of Terraria Midi player with all the features you need to rock out to some midis in Terraria. Also comes with a new finalized UI, a playback UI, a keybind editor, and a syncing feature for multi-person performances (Experimental).
Last edited: Mar 26, 2019

Staff member
Moderator
This is pretty cool. Although not the most useful, it is certainly fun!
How long did it take you to make this?

darthmorf said:
This is pretty cool. Although not the most useful, it is certainly fun!
How long did it take you to make this?
Click to expand...

It took about 20 days to get it to the point it's at today. I started with scripted songs programmatically entered in and then shifted over to midis once I got the playback down. I'll admit though, half the time was spent screwing around with the tool and playing midis. However it was pretty beneficial since it helped me uncover most of the bugs.

can i putt other midis into the midi player?

eduardokirbyfun said:
can i putt other midis into the midi player?
Click to expand...

Yup, you can load any midis you want to play into the program. The main issue with playing any midi is that most aren't suitable for playback in Terraria. By this I mean either the octave adjustment makes it sound off or notes are too fast a and skipped or multiple different notes are played at once.

I'd highly recommend editing any midis you want to play in MidiEditor if they don't sound correct from the get go.

I'm also planning on adding support for ABC files soon too, like what's used in Starbound.

With this we have the addition of ABC Notation support, a piano mode to test playback within the program instead of in Terraria, and the new Track Graph window to help visualize how the program modifies the midi in order to be playable in Terraria. 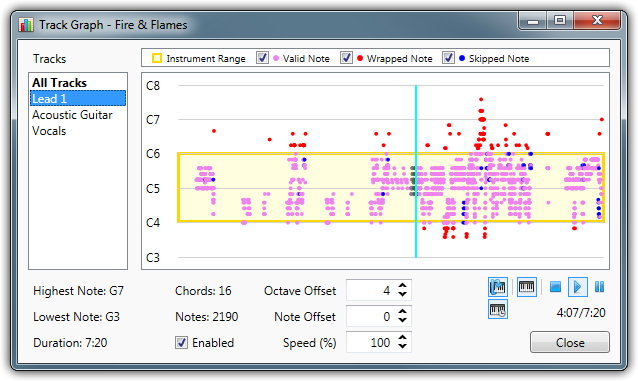 I'm thinking about making a multiplayer server plugin doing this, to avoid people having to mod their clients. Neat idea!

KceGio said:
How to convert mp3 to midi/mid i tried online websites but when i try to place it in the Terraria Midi player it doesn't work
Click to expand...

Unfortunately converting to midi, whether possible or not, will never produce good results unless the original track is relatively clean and minimal. For example: Black Midis are usually the output and 100% unplayable in Terraria due to the number of notes compressed into one moment.

If you want a midi, then your best bet is to find an existed one that has already been manually constructed by something.

Where to download other midis that work for this?

There really isn't any designated place to find midis that naturally work with this. Out of a hundred midis I looked at while making this, only a couple sounded natural when played without modification. Basically, if you want to play a song in Terraria, you'll almost always need to do the work yourself to make it sound nice.

Now I plan on making some sort of guide to help people with editing midis into a playable format as a user on YouTube recently requested it, so I'll keep you updated on that. But for now I'll layout some general tips and tricks.

Forwarning:
Improving midis often requires a bit of knowledge about music, if you have musical experience, then this information will be much easier to process. I'm no expert on music so my explanations are pretty lacking. I do have a friend who works in that field though, so they may be able to help in writing a proper guide.

Editing:
I personally used Midi Editor to fix up and prepare my midis. This one works well for this purpose and it's free.
I don't have the time to write a comprehensive guide on how to use Midi Editor but there may be some helpful forums posts explaining anything you have trouble with.

Editing Tips & Tricks:
Note Overlapping: The biggest problem with playing midis is the fact that multiple notes very often overlap each other in the timeline. Most of the time these notes are in the same octave, so picking one to remove is as easy as choosing the one that's in the octave range you plan on using. The other situation is when the song is playing a chord, in this case, you'll have to listen to the chord and each individual note, and then decide which one sounds closest to what the original sounded like.

Octave Wrapping: The next important problem to tackle is octave wrapping. If a note is outside the 2 octave range of Terraria's instruments, Terraria midi player will bring it into the range by raising or lowering it X octaves until it's in range. This is helpful as, it removes the need to change the octave yourself, hover it does not always produce optimal results. For example, when I was editing Tal Tal Heights, I found that one part of the song started going too high halfway through. Because only a few notes were out of range, the octave wrapping made this part sound strange. What I did was take the entire second half of the part of the song and lower it one octave so it sounded better with only an initial instance of wrapping. See example here at 1:16.

Long Notes: In Terraria you can not hold a note, or continue to play the note for a duration of time. There aren't many cases where long notes make the sound sound worse when playing it, but if there's a long period where a single note is played and nothing else, you may want to try repeating the note over the duration. When you repeat the note, it's important to match it to the time signature of the song. This isn't necessarily displayed anywhere, but it can be determined based on how often the major notes are hit during a single measure. A common example is 4/4 notes quarter per measure.

Multiple Tracks: Often times, midis come packed with multiple tracks that each play a different part of the song. Usually, you'll want to play the melody which is the main part of the song (it's not guaranteed that this is packed into a single track). The harmony on the other hand, is the background portion of the song that adds life to it. This is where playing music with multiple people is helpful (but hard to organize). It's not always impossible to play both the melody and harmony at the same time if the notes give room for both to be played.

Percussion Tracks: Tracks that play sound effects such as drums or symbols are usually completely unnecessary for Terraria Midi Player, it's recommended you completely remove these tracks so that the program does not attempt to play these notes.
M

[Translated with help of friend]

Works amazing, i now can play terraria megalovania any time

SO FAR AWAY WE WAIT FOR THE DAY
I

When do you think this will be available to use this on Mac? I don't have Windows

Some unfortunate news for Terraria Midi Player. I've found the source of the issue being reported with occasional off-sounding note pitch during playback. In short...

Half of all playable notes have been snapped from existence.

(however the range is still 2 octaves)

More specifically, notes are being clipped to 6th's of an octaves' range, allowing for easy playback by hand. Personally I like this decision, as it really does make hitting your intended note easy, meanwhile allowing the full 12-notes per octave drastically decreases accuracy. But of course this prevents other standard notes from being playable at all, granted, my knowledge still isn't fully up-to-date with the instrument changes besides the new musical items. Not all is bad news though...

Interesting Improvements to Instruments in Terraria 1.4:
~ Zoom settings no longer affect the pitch of note playback

~
~ The entire process of handling musical instruments in-code is much cleaner (much less hardcoded magic) ~
~ The area in code causing note pitch clipping to 6th's is very easily modifiable for patchers ~
~ Note clipping is done before reporting to the server, so it's not client side!

~
~ With the number of advanced settings being added to config.json, we may get one to change this ~

Below is the list of notes affected by the current system.

Notes are being clipped to one of 12 values (6 per octave), before we had a range of 24 semitones (12 per octave), Note there were no restrictions or clipping pre-1.4, but 12-semitones per octave is what is normally used.
The change in note clipping is all controlled through the variable Terraria.Player.musicNotes.


C#:
C#:
In short, this was all more concerning on first discovery, but its clear things were well-designed in 1.4 in terms of flexibility (even if not supported yet).
Terraria Midi Player will not be getting an update to work-around the note clipping, (there really isn't any solution that could solve issue, octaves can be wrapped and sound close enough, but missing notes don't have that luxury). Terraria Midi Player will more likely be updated to fix this via other means.

I plan on waiting to see what happens with instruments going forwards. But a patcher to change the Terraria.Player.musicNotes value is a very likely possibility. It's already been confirmed to work with a quick one-line modification using dnSpy (a tool for modifying programs written in .NET, like C#)

Note: That if you have a song without any missing notes, then everything will still work fine as usual. Actually, a setting to ignore missing notes or reprioritize (when overlapping with other notes) may be a workable solution for a future update.
Last edited: Jun 21, 2020
You must log in or register to reply here.
Share:
Facebook Twitter Reddit Pinterest Tumblr WhatsApp Email Link
Top Bottom