As many of you already know, 1.3.3 is going to focus on improving the Underground Desert. So I came up with the idea of Ancient U.F.O.s.

Ancient U.F.O.s would generate similarly to underground cabins, but slightly rarer and only deep within the Desert Underground.
They would look something like this (Note: They would not be made out of Conduit Plating, this is just a concept picture): 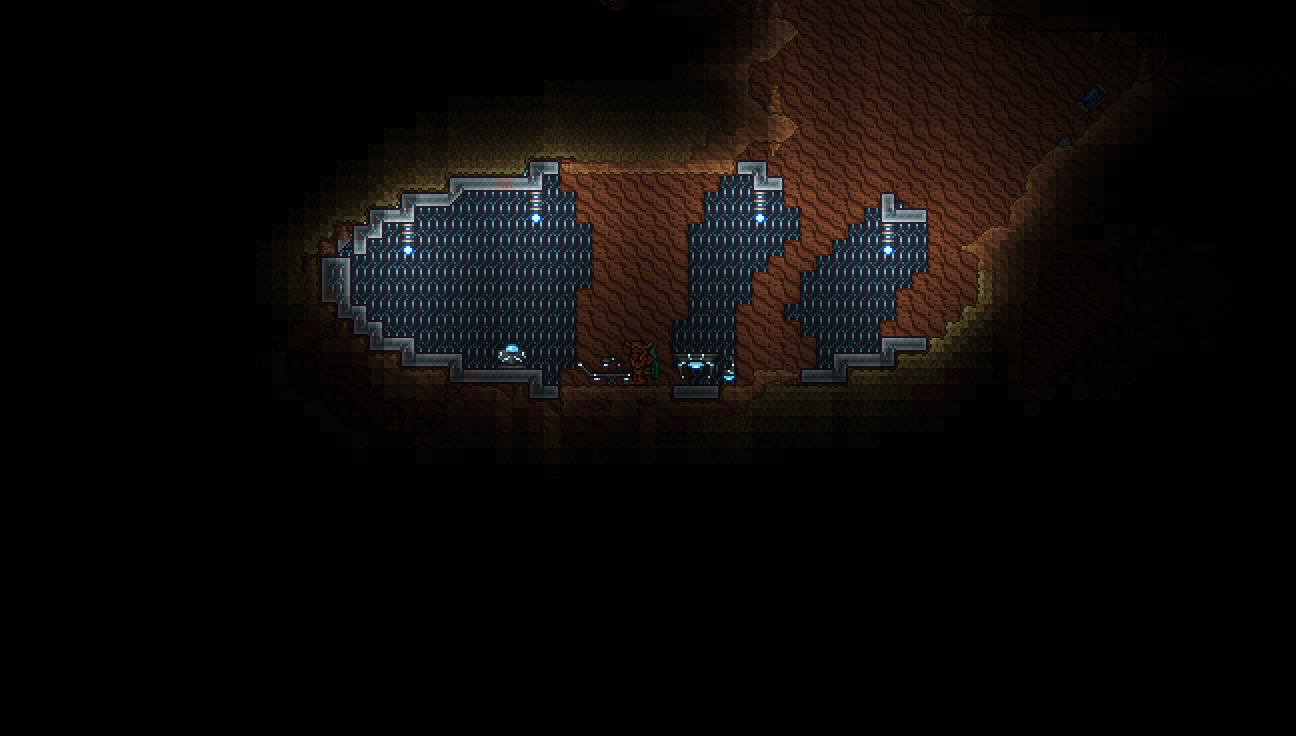 
The Chest in an Ancient U.F.O. will also contain one of the following rare weapons.


Glitched Laser Gun
[Sprite Needed]
20 Magic Damage
0 Knockback
Slow (34 Use Time)
Uses 11 Mana
Fires a volley of 1-3 lasers, similar to the Space Gun, which can pierce/bounce up to one time.

17 Melee Damage
Strong Knockback (6)
Very Fast (14)
Works like a normal boomerang, but will home in on enemies when within a radius of 4 tiles of them.
Can home in on and hit up to 2 enemies before having to return.


Edit: Removed the table, the sprites were messed up
Edit 2: Included possible materials for the U.F.O.s to be made of
Last edited: Jul 17, 2016

Interesting! Is this by any chance referring to how the Atari E.T. cartridges were buried under a desert? ;P

Spectre Guide said:
Interesting! Is this by any chance referring to how the Atari E.T. cartridges were buried under a desert? ;P
Click to expand...

It was more a reference to the supposed Roswell U.F.O. crashes.

Mebybemn said:
It was more a reference to the supposed Roswell U.F.O. crashes.
Click to expand...

I don't think I'd want to have Ice Cream and Cake if they have U.F.O.s inside of them.

Still support though, and I know that the title was probably a misspelling.

Murphmario said:
I don't think I'd want to have Ice Cream and Cake if they have U.F.O.s inside of them.

Still support though, and I know that the title was probably a misspelling.
Click to expand...

Oops, I always do that xD

Thanks for the support

What would the saucers be made of?

MournfulRelic said:
What would the saucers be made of?
Click to expand...

i love it! support

your idea is very s
imilar to mine and I ochke like your idea, its my concept
Mysterious rhombus, my little of the concept art, here I want to tell you my idea: We all of course do you know about the temple in the jungle and so that the ancient sanctuary lihzahrd from the environment of danger! But why not frozen analogue? after long my thought I came up than it can be and IT'S destroyed the spacecraft Old ones who did not understand, in Lovecraft mythology, they are the ancient aliens who came to the Earth from time immemorial, they are the same and have created a life in the world of a long time the dominant here they still have decided to stay, but unknown circumstances( apparently something them on this is forced to) they were closed in the north pole, after that they do not get out of his spaceship, so they lived as long as they do not provided, you destroyer of prehistoric temples. Well now on the design of the structure of this is in my opinion must be rhombus form of the building is located on in the ice biome, at the depths of lihzahrd of the temple it will consist of" mysterious brick", so that I decided to call these blocks, color will be they have a dark green closer to the blue and it is desirable to pieces of ice and snow on them for realism, the model will be similar to the white line. Music, of course, should be a kind of genre will be symphony dubstep and chiptun with a certain similarity of musical accompaniment in the crimson

Entity: Old ones in fact the heroes of all my idea of detailed information here ==> https://en.m.wikipedia.org/wiki/Old_One_in_fiction
This is terribly strange creation of looking as a combination of flora and fauna, growth in five and a half blocks with wings and is able to fly X.P: 320 DMG: 125
Ancient slime similar to the usual slimes but differ from them the fact that have the growths on the back, dark blue create a pretty impressive size of X. P: 190 DMG 85(if you a fan of Lovectaft that will understand who is)

Rather than making that alien set appear in a chest, why not make it a rare enemy that sometimes spawns in the UFOs, and when killed, can drop part of the set? Just a thought for ya

I love Deserts than contains Aliens there. Gives me memories of the 20th Century.

I love this idea! It would also provide a bit of foreshadowing for later in the game!

How about the chest contains something like "Rusty Alien Plating" that could be crafted into Alien Conduit Plating? Either that or make the UFO out of Rusty Plating. Then, you could use Conduit Plating to make some form of pre hardmode armour, then in hardmode a martian madness summoner? Idk, just a thought. Support!

Why would there be meteor in an alien spaceship? This way, a player could easily skip ahead by dashing straight into a desert and obtaining superior gear. At least you have to brave the more difficult corruption, grapple down, and bomb an orb currently.