Is it possible that the ingredients for the absorber from the sea snail and the giant shelly do not drop?
Click to expand...

You're just unlucky. They drop...

This could be a really dumb question but......When or in what conditions does the sand elemental spawn ?

TheGamersStig said:
This could be a really dumb question but......When or in what conditions does the sand elemental spawn ?
Click to expand...

That is from vanilla terraria... but to answer you're question... only in a Darude - Sandstorm.

TheGamersStig said:
This could be a really dumb question but......When or in what conditions does the sand elemental spawn ?
Click to expand...

The conditions for a sand elemental to spawn is when you are in hardmode by killing WoF, and there is a sand storm that is active.

Khaelis said:
That is from vanilla terraria... but to answer you're question... only in a Darude - Sandstorm.
Click to expand...

Can someone tell me why I cant drop Abaddon from brimstone elemental? I killed it about 40 times and only got lances and tomes

ShadoW° said:
Dude im can do some sprites for and you add them to the mod??????

If you can sprite then I recomend going to the discord and check out the "Sprites needed" channel. There you can find a list of stuff that needs to be sprited, and if Drew thinks they look good enough he will add them 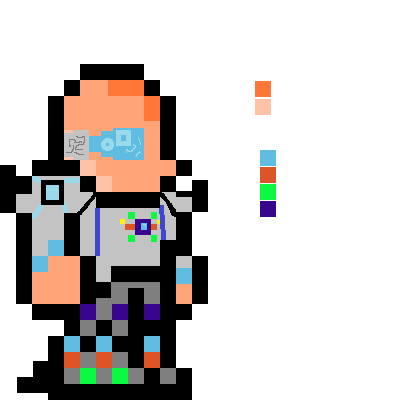 This doesn't really fit with Calamity's theme, and you're not being consistent with your sprite (2x2 pixels) at all.

A few things..
1: There is no visible shading at all on that
2: You arent being consistent with 2x2 pixels AT ALL
3: What @Khaelis said. It doesnt really fit Calamity.

I'd like to suggest you take a look at the pixel art guide at the forrum's art section, since as it is right now it's both unapealing and unusable.

We apreciate the thought though!

A few bugs to report regarding multiplayer:

First, when using the "Boss Checklist" mod, the Crabulon boss does not check off correctly, even after slain both naturally and after summoned. This issue does not exist in single player.

Second, since you can only fight the Perferators OR Hive Mind in a single world until deep late game where you can create another biome, there is an empty check box for most of the playthrough. This isn't a bug, it's just a minor annoyance. If you could add a recipe to summon one or the other without needing the entire biome or another world created, I'd be very grateful. Maybe make it so you can only summon the other boss once you kill the other? Like using true shadow scales to craft the perferator summon, and then allow them to be summoned in the corruption? Just a thought.

Also when generating a world for multiplayer and using the tmodloader server console, all of the restricted ores are generated immedietly. I was very surprised to find Perennial ore and Aerialite ore before I even had gold tools. It's to my knowledge that these ores are supposed to only generate after certain bosses are killed, but in multiplayer they are all generated as the world is created, and no additional ore spawns after the bosses are slain.

This is the last time i'm repeating this, ores now spawn on world gen. its intentional. read a bit.

Ziggums said:
This is the last time i'm repeating this, ores now spawn on world gen. its intentional. read a bit.
Click to expand...

I'm honestly surprised people haven't caught onto this by now. :/

I'm honestly surprised people haven't caught onto this by now. :/
Click to expand...

Ha never heard that one before xd

well i will make one with the calamity theme

ShadoW° said:
well i will make one with the calamity theme
Click to expand...

Instead of more stuff, can you clean up the code and make it smoother please?

Bluefusion16 said:
Instead of more stuff, can you clean up the code and make it smoother please?
Click to expand...