Full Steam Ahead! tModLoader to Launch as Free DLC for Terraria with Journey's End!

We are just shy of three weeks out from the highly-anticipated release of Terraria: Journey's End, and we know that as the anticipation builds, so will the excitement! Well, allow us to add more fuel to that fire with the official announcement that the long-standing "Terraria mod to make and play mods", tModLoader will be coming to Steam as a free DLC for Terraria alongside Journey's End!

Though fully-integrated official mod support is not something that is feasible within the Terraria codebase, tModLoader has served faithfully as that "bridge" between the main game and the amazing library of player-created mods that exists for Terraria. With this launch, modding has never been more visible or accessible for Terrarians - so, if you have not ever tried out modded Terraria, there is no time like the present!


The launch version of TML for Steam will be based on the 1.3.5 version of the game - as will all of the currently-available mods out there. This will allow for players to continue to enjoy modded Terraria uninterrupted while they can also separately dive into all that Journey's End/1.4 has to offer on the vanilla side of the fence. The TML Team will be working diligently to get a 1.4-tier TML out as quickly as possible on Steam so that, as mods are updated to the 1.4 standard, support for them will already be available.

Always remember that playing with mods is at your own risk, etc. Neither Re-Logic nor the TML Team can vouch for the quality and/or functionality of each and every mod. If you are having issues with any specific mod, the best way to sort that out is to get in touch with the team behind that specific mod!

Future plans also include the addition of Steam Workshop support underneath the TML banner, allowing mod creators to upload and host their mods on Steam for the first time. This will take the accessibility and visibility of these amazing community creations to yet another level.

The Re-Logic team felt strongly that with Journey's End being the final major content update to Terraria, there was no better way to tie things off than to hand the keys over to the fans. With tModLoader and a stable foundation to work from in 1.4, modders are now free to explore any number of ways that the game might be interpreted or experienced. We cannot wait to see where you take this wonderful world that we have created!


Check out the Steam Page for tModLoader below - make sure you wishlist this so that you will know the instant it is released! 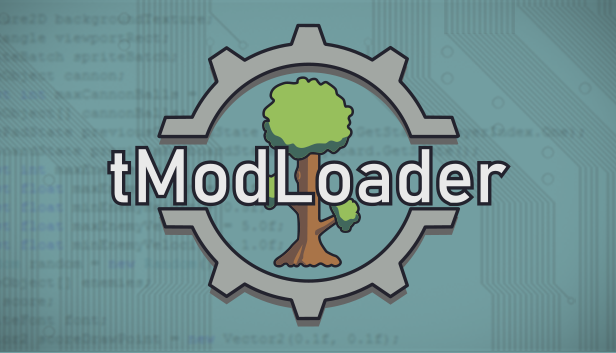 TMODLOADER - WHAT IS IT AND HOW DOES IT WORK?

​
A fan-created project built as a solution to providing mod support for Terraria, tModLoader has been the main bridge to modded Terraria for several years. When installed alongside the core Terraria game, TML allows players to download and use community-created mods for Terraria within an easy-to-use interface.

This is only a very cursory and quick overview of things - for full details, support, and the like, we encourage you to visit the official tModLoader website (tmodloader.net) linked below. This is chock full of details, contact information, and much much more! For starters, once you open up TML, you will notice a few differences - most notably a cool new logo as well as two new choices in your game menu: Mods and Mod Browser! The latter is where our Journey continues... 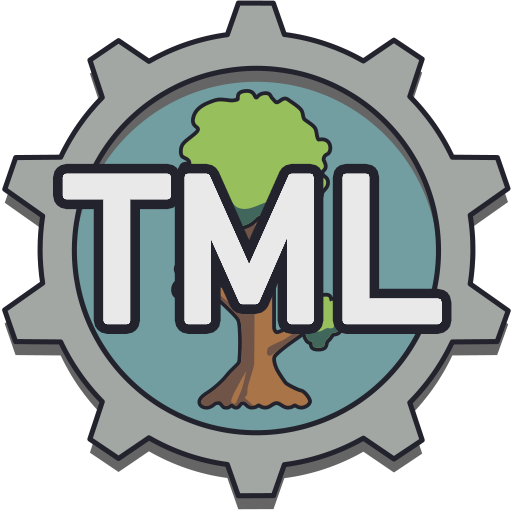 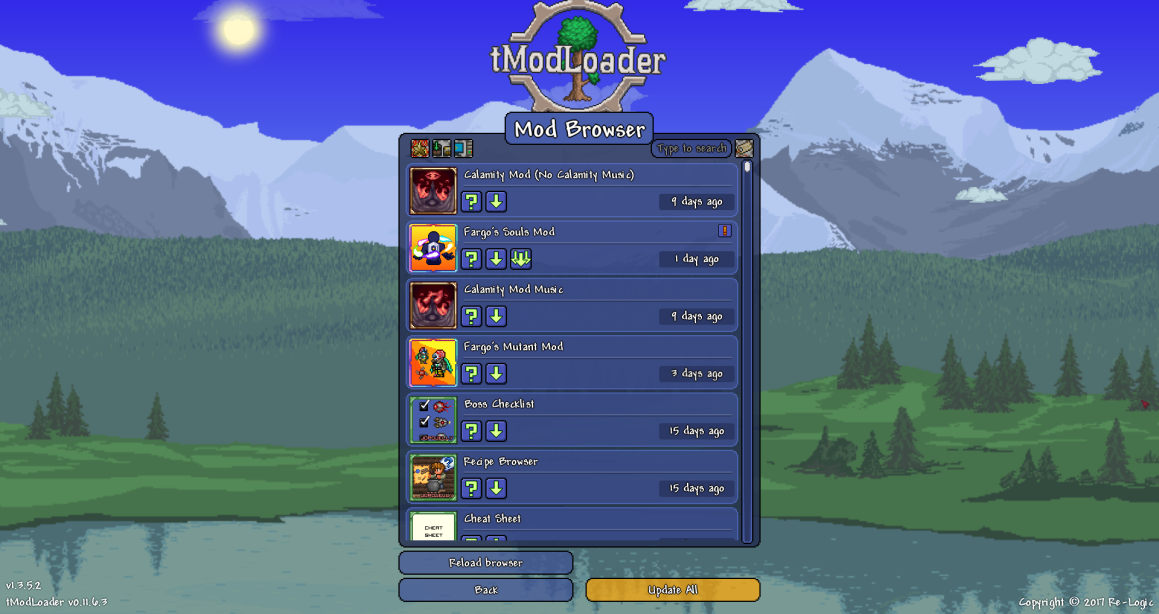 This is where you can peruse all of the currently-available mods supported by tModLoader. This list is sortable and searchable in a variety of ways. You can learn more about given mods and then download any that catch your eye.

All downloaded mods will be saved in your Documents/My Games/Terraria/Modloader/Mods folder. Once downloaded, they will appear on your Mods List! 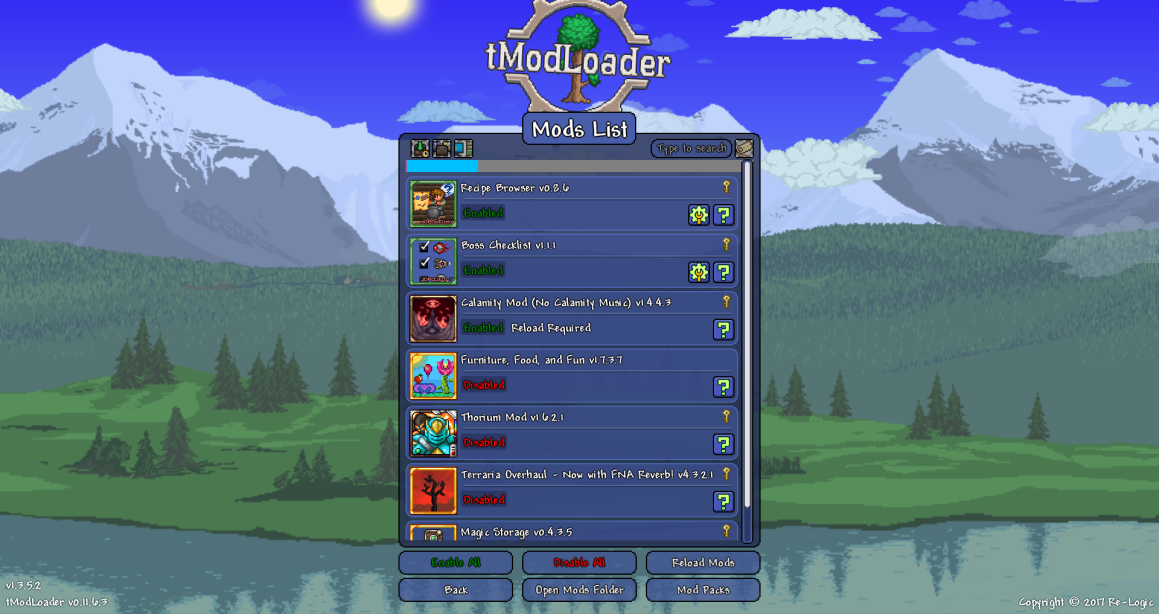 ​
Once you have downloaded the mods you are interested in, you can head on over to the Mods Menu option from the main menu to find the list of mods you downloaded ready for you to enable and play. You can even Enable and Disable every mod on your list at once - though again, be careful, as trying to play too many mods at once could cause issues! 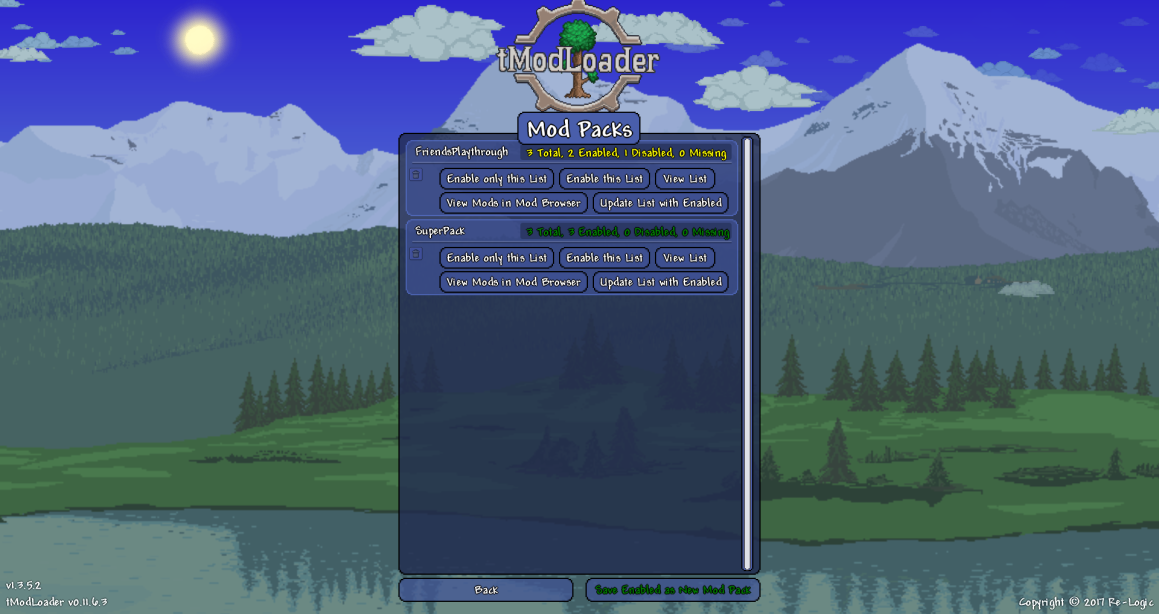 ​
The Mod Packs section allows you to create your very own custom sets of multiple mods that you enjoy and would like to play on a regular basis. For this example, we have two different Mod Packs that we can easily switch between, depending on which mods we are in the mood for or which group of friends we intend to play with. Mod Packs allows you to quickly return to any favorite combos that you found particularly enjoyable with little effort.

​
So, that's it! Once you spend a few minutes messing around with how it all works, it really does become second-hand, we promise. As further developments take place in the tModLoader Steam project, we will let you know - as we mentioned, the 1.4 version and Steam Workshop will be up next! If you have more questions, feel free to share them here and we will do our best to answer... and again, the TML Official Thread linked above is a fantastic resource. In the meantime, you may want to read up on what mods you might be interested in trying once you reach Journey's End!
Last edited: May 13, 2020

This is the best news for any modder. The years have very much paid off.

@demizegg i told you it was a mod launcher version

Staff member
Moderator
This is awesome news, looking forward to people not having to wait for tmod to update to 1.4!

This puts a big smile on my face.

Theres in a future also another dlc that could be like Super Terraria world?

I never expect something like this from Terraria. This is great!

Free DLC on Steam, huh? How about on GOG? Will it be a DLC too there?

I think this might make migration to 1.4 easier now for modders, right?

That's awesome! Everything seemed to be suggesting official mod support, but it seemed weird, cause Tmodloader was already so fleshed out. Turns out things couldn't be better. I'm excited!
One question: will this have 64x functionality? the 64 version of tmodloader runs almost totally different to the regular one when your trying to do something silly like play with way too many mods.

Question: is this the 32bit or 64bit version?

well this is quite something

These are really happy and heartwarming news
J

This is the best news I’ve heard in a while