So, I had this idea after my friend Jack told me he only built NPC towers because he was never very into building games. I also made it for all the people I keep seeing on this subreddit who say things like "Wow, I never really am able to make things like (Insert build of the day thread here)! I always make dirt boxes!".

Well, this map file is meant to change that! In this map, there are 3 bases just ready to move in to (One in the desert, one in the snow, and one in the "Purity", as well as an "Invasion Castle" for destroying wave-based events (You'll know it when you see it) and mushroom and jungle themed pretty rooms for the Witch Doctor and Truffles.)

Now, all of these builds are builds that I have lifted from my Single player worlds, and I MAY have missed some chests somewhere. (I put them everywhere.) This is just my initial release to get some feedback on how it is going, version 1.0.0.

Please post any bugs or errors in the map (Including OP items left behind here).

A couple notes about the map;

1) There is a Portal Gun inside of the starting house. You can keep it or throw it away - I just figured having 2 versions of the same map would be tedious, and I wanted people to have the option of having it.

2) The map is on Expert mode. Version 1.1 will have both expert and normal mode variants, but this is the initial version, and I just wanted to get it out there before I went to bed.

3) The Snow and Spawn bases each have a couple of beginner's goodies in the chests for you. Go nuts. :3 (Or throw them out, if you'd really like)

4) Truffles CANNOT be living in the dungeon house if you would like the Old Man OR Cultists to spawn there. It is an oversight on my part, I know. I will fix it to make another home for truffles in version 1.1 (Which will come later this week).

5) Finally, remember, just have fun. I made this map because a couple people I know REALLY love the fighting and progression aspect of Terraria, but either don't want to build or don't want to build as much as the game makes you. This map is honestly just to help those who don't like building or can't very well but still want a nice base - As of version 1.0, there is nothing special with it aside from the bases on it (Although I plan to add a crimson hole in version 1.1 so that you can go to the crimson AND corruption in your world.)

6) DO NOT go to the dungeon unprepared! Bring a weapon to fight the hard mushroom enemies at the entrance! Be prepared to go around it when you get to needing corruption stuff too! This will be fixed in 1.1 somehow, but for now the annoyance is there

-Use the room under the spawn base to the right to make potion ingredients! There's even a couple seeds to get you started! Just plant the seeds in the clay pots!

-Make sure you get the bonus life crystals hidden in one of the chests in the starting house!

-Openly praise the sun Lord to give you luck in your travels!

Here are some screencaps (Piplup and fishing holes not included in 1.0, though piplup will be an easter egg in 1.1 and the fishing holes will be in to spice up the world...): 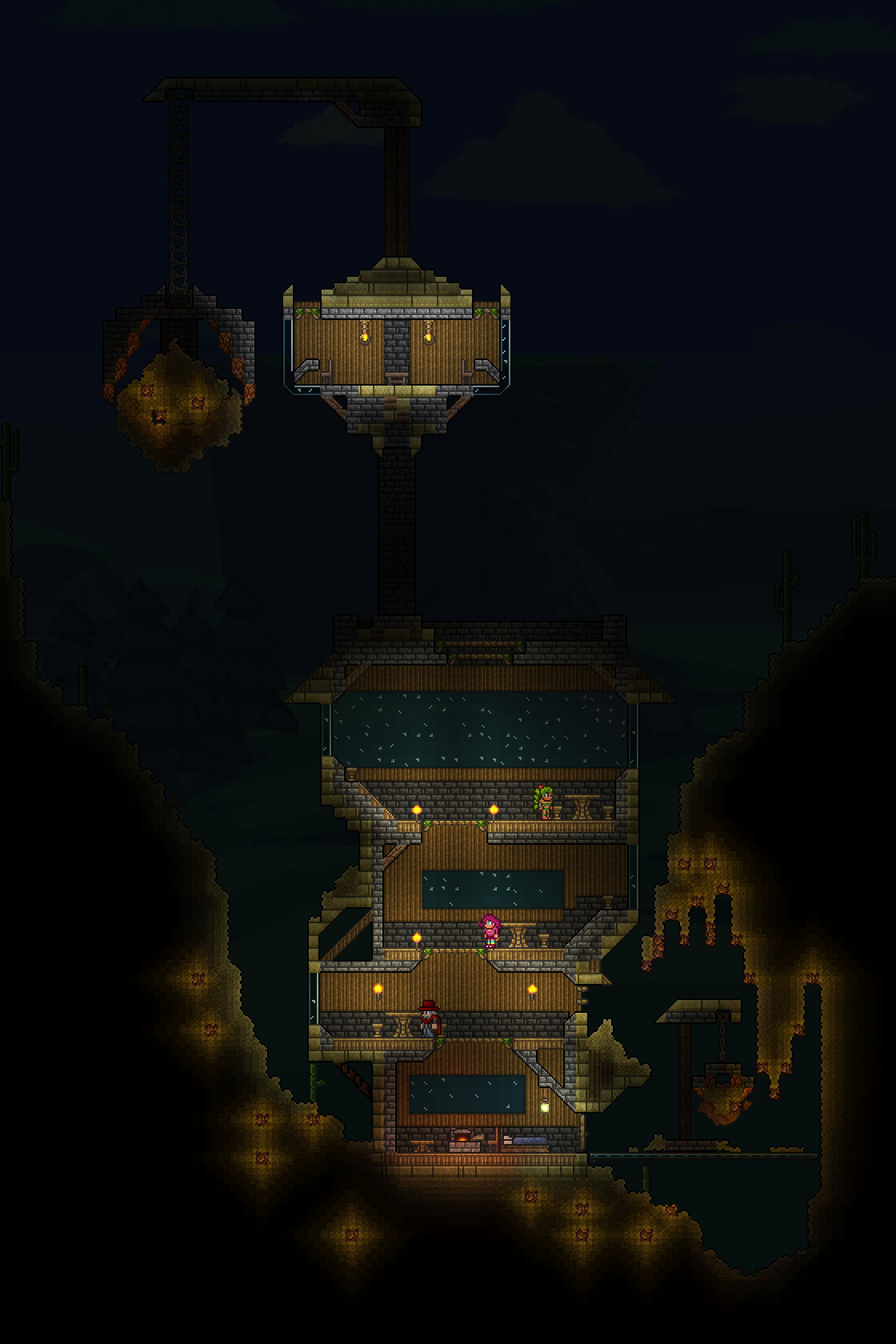 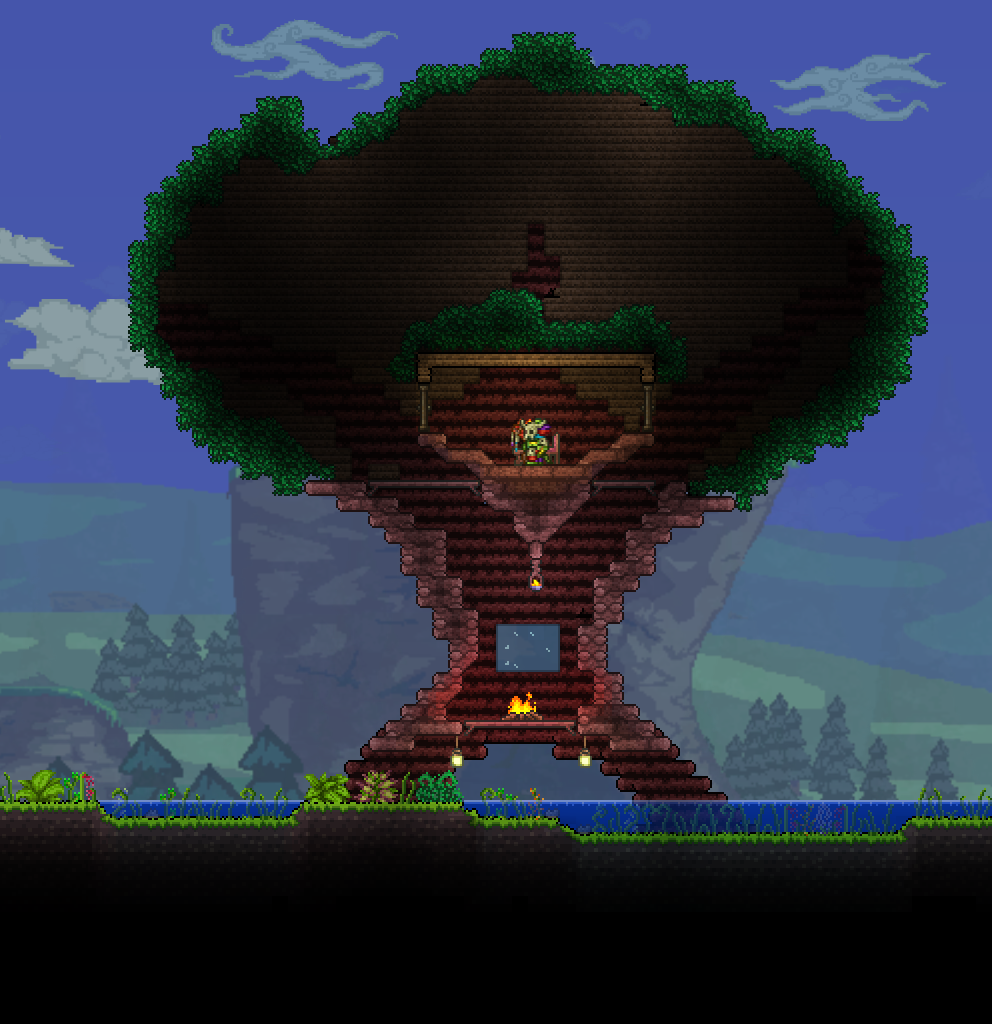 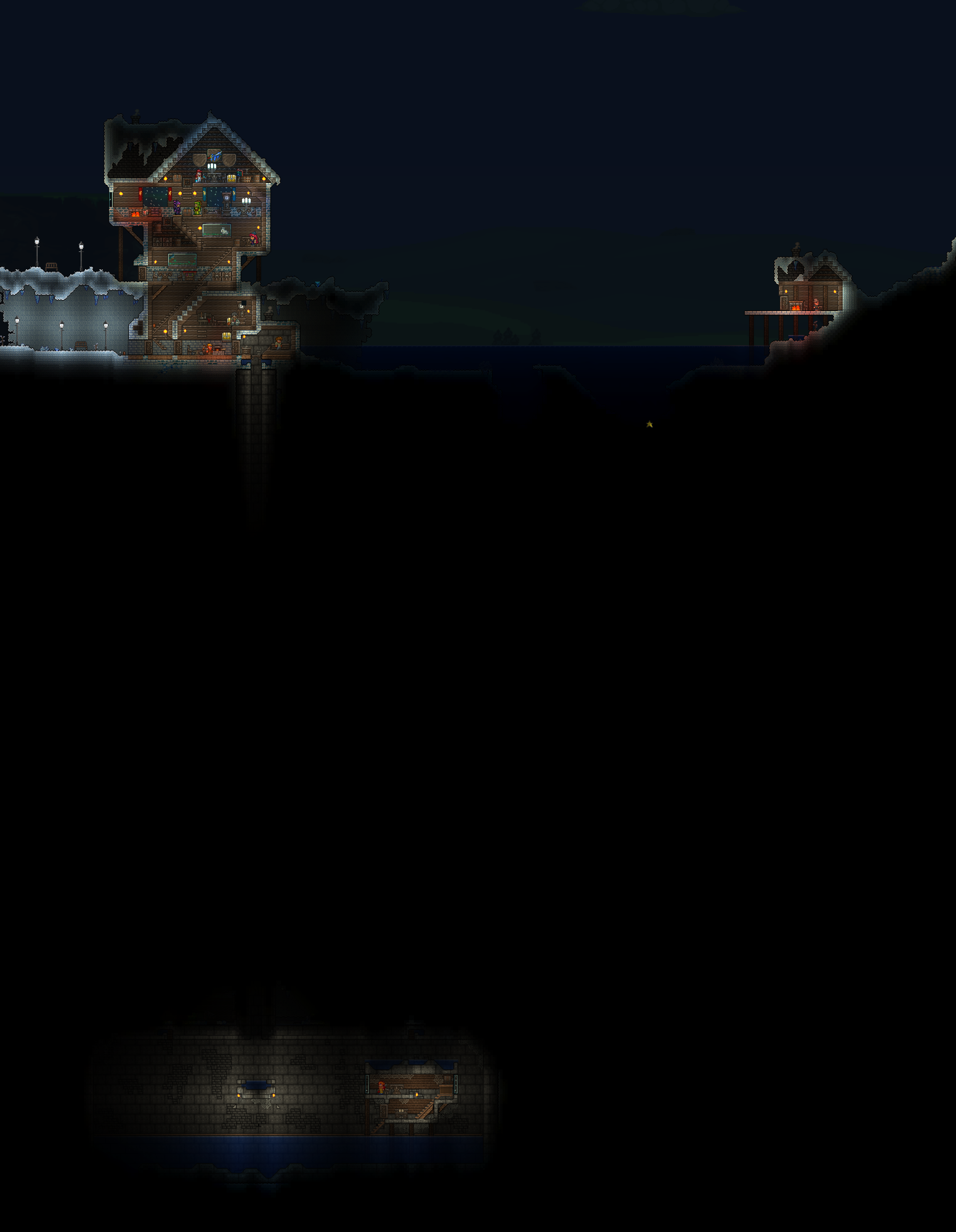 
Here is the link (Place in your worlds folder uncompressed):

Edit: another note - the corruption is on the far left side.

ALSO - IF YOU WOULD LIKE YOUR BUILD FEATURED IN NOBURR, SIMPLY POST A SCREEN SHOT BELOW AND YOU CAN BE IN HERE CREDITED BY NAME. (Please note I will be stripping your building of anything that can help the player, such as items chests and mannequins with armor on)

EDIT EDIT EDIT: THIS MAP IS COMPLETED, BUUUUT THIS IS VERSION 1.0! Version 1.1 will include the following:

1- More map options in the download such as normal mode, portalgun, expert, etc.
2- A crimson cave for you to explore in as well as the corruption!
3- Community-submitted buildings!
4- Several "Easter Egg" buildings (Sprite art underground and funny builds scattered throughout, aswell as references).

1) The chest at the Arena have a couple mid-hardmode weapons in them. Delete in 1.1.
2) There's absolutely something else
Last edited: Jul 21, 2015

some great buildings, might use it in a future playthrough

Can confirm, having played on the original singleplayer world these builds are awesome. Might use this in a future playthrough
C

Sorry for the stupid question, but, this world is in hardmode (you defeated WOF)!?

Cyro Kamradt said:
Sorry for the stupid question, but, this world is in hardmode (you defeated WOF)!?
Click to expand...

If you're asking because of the image gallery, a lot of the builds are from his main world, which is in hardmode. This world of course isn't in hardmode.

Wow, these are great. I was looking for some base templates, and I'll definitely be adding on to these in my world. (TEdit export)