IMPORTANT
This mods development will not continue, as it is dead. It may be used by me in some other form, probably in my other mod (Not on forums) so please stop asking about this mod.
Hello, and welcome to a thread for a mod called...

This is a large mod that adds some bosses, a lot of new items and weapons, very powerful ore, and some summons.
​
Quick Introduction

This happened after one strong terrarian defeated the Moon Lord. He was named Gridnum.
After he beated Moon Lord, he dropped a very stange looking object. He read info about the object. "This item should not be used until you are sure you want to face the challanges it brings." Gridnum was thinking about using the object, which was now glowing, to see what would happen. He used the glowing object and it faded away. This was the moment when Gridnum saw strange shadows, in the shape of the Twins, but there were three eyes instead of two.
"Prepare to face your biggest mistake." Three whispers had spoken at the same time, and Gridnum was blinded. There was a giant flash of white, and three purple eyes had suddenly appeared. The darkest eye was dashing around quickly, the lightest eye was blasting things to bits, and the medium eye was both dashing and blasting.
After a great battle, he heard the words "Your world has been streaked with Universum"
Gridnum had never seen or heard of universum. He thought it was a special ore, so he went mining for it. Later he found a large patch of what looked like universum next to some orichalcum. It was a purple - pink color, with some light blue mixed in. He collected some with his celestial tier nebula pickaxe. It was slow to mine, but he got enough for 60 bars. He went home looking at the ore, wondering how much power it held. Gridnum talked to the Guide to see what could be made. "I wonder what this thing is, it looks powerful."
This was the real finale.
Shrumium coming soon!

Shrumium!
from top left
- Shrumium Ore and bar
- Shrumium Armor.
- Shrumiblade and True Shrumiblade. Very fast speed, comparable to cutlass
- Shrumagni. Automatic gun
- Shrudaptor. Its damage is 80% of your last used weapon, so it will be always useful for you. A bit harder to get than Shrumagni
- Shrumibeam rod. Shrumium magic weapon
- Shrumium Staff. Summons Mushi hornet
- FUNGISHIP and its minions!
A post-moonlord boss, a martian ship possessed by mushrooms. Summons minions, and has turrets which must be broken to make him killable. Mostly stationary boss. On its death you get Shrumium generated on your world! 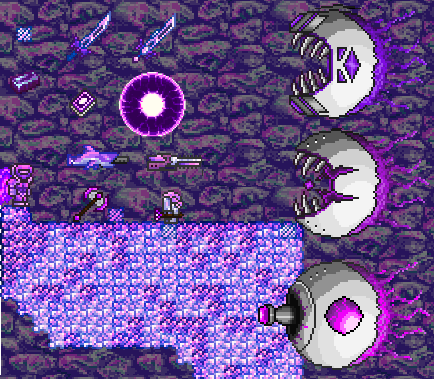 Universum!
From top left
- Universum Ore and bar
- Universum Armor with wings
- Uniblade and Truniblade. Very fast speed
- Unitome. Shoots an upgraded version of Magnet Sphere
- Unilodon. A better megashark
- Unidaptor. Its damage is 80% of your last used weapon, so it will be always useful for you. A bit harder to get than Unilodon
- Unitaurs Battleaxe. Universum Summon weapon
- The Trio! Beat them and your world will be granted with Universum. From top : Yrymrogok, Terranechro and Cthuril 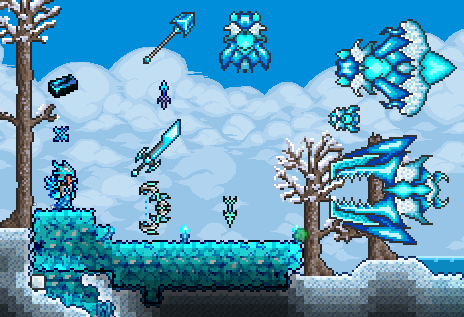 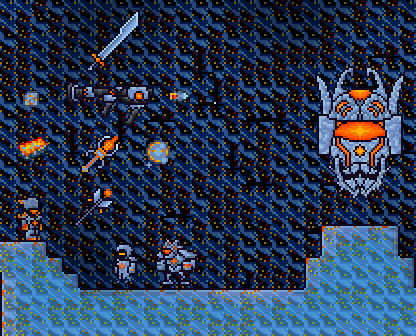 Techium!
- Appears after beating Moon lord
- From top left
- Ore. Drops from Techium Monsters
- Bar. Crafted from 5 ores
- Techium Sword. Shoots a techium bolt.
- Techium Rocket launcher and Techium Rocket
- Techium Staff. Summons a Techium Sphere, Spinning around you and protecting you from Enemies by shooting them
- Techium Scepter. Magic weapon
- Possessed Techium. A wraith-type enemy
- Techium Golem. Behaves similar to Granite golem. Drops 3-7 ores
- And TECHRON, the boss of techium cave. Has 3 phases, in 1st he floats above the player shooting lasers at him, and occasionaly stops to deploy homing rockets, in 2nd he gains an attack similar to Martian Saucers Death Ray, and in 3rd he gains another attack in which he starts spinning and flies towards the player shooting rockets and lasers in random directions. 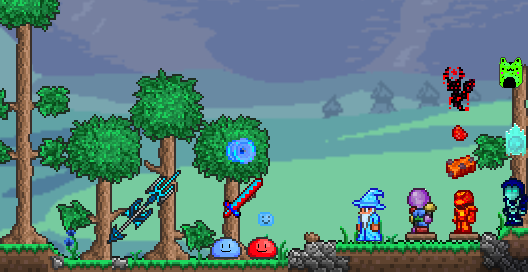 Blockaroz. Spriter, Idea Giver
@Serial Dreemurr - Music
@Some Schmo - Spriter
@SnakeBlock - Spriter
Special Thanks
- The tModLoader team, for creating tModLoader
- Jopojelly, Gorateron, MaxAstro, pie75 and everyone on tML Discord chat for help with code
- KeRu(Not on this forum), for a couple of sprites
- Graydee, for biome generation help
- alienmist, for help with water generating
- TrueWyvern from discord, for Fungiship sprite
Discord Server
If you want to chat with us live, apply for beta tester status or recieve more spoilers? Here is an invite for the official Discord server!
https://discord.gg/011ykAJBpOwZpt6Mr
Support Banner
If you want to spread the word about the mod, we will really apreciate putting this code in your signature

Download
No download yet, It's still WIP
BUT we have a very early preview, only shows shrumium's content. It's not fully finished, if you think something needs work, or balancing, say it here!

Reserved in case i need it

Awesome mod but the bosses are just modified.

dimbo33250283 said:
Awesome mod but the bosses are just modified.
Click to expand...

I'm still not a pro coder, when i learn how to create better AI i will do my best to make them original

Bosses are probably the most difficult to do and to be done right, can't blame anyone there. This looks good, me approves.

You can always help with spriting, I like those sprites do I put them into the mod. And they are not only recolors, even eyes are a bit different. If that will make you feel better, the eye sprites are being reworked now
Last edited: May 26, 2016

So this team are receiving ideas? nice i think the terraria need a atlantis biome because have a lot of waters acessorys but they no are so useful in the terraria i think add a atlantis giant biome in the cave only one like the temple after defeating plantera and have only waters and white blocks with sharks and enemies from atlantis would be nice but this need work to make.
unbreakable blocks to prevent player to destroy and make them go to atlantean much times to get items and farm materials.

Good idea, but i never saw a mod doing structures, when i know how to do them i will try

Yay! New wip mod. Its looking good so far. Keep it up

Looking pretty nice! I've got my eyes on this

THIS MOD LOOKS SO GOOD i am very excited for it

Well guys, just so you know, Echonex is taking a break from coding, and I'm spriting a new ore. So there will be three stories.

Hey! Wait! My birthday is today! Uniproject mod dev birthday!
Maybe as a gift we might choose some random people to become... Beta testers.
We have one, but that's not really enough, is it? So... Just wait. We will tell winners.

Blockaroz said:
Hey! Wait! My birthday is today! Uniproject mod dev birthday!
Maybe as a gift we might choose some random people to become... Beta testers.
We have one, but that's not really enough, is it? So... Just wait. We will tell winners.
Click to expand...

Well, happy birthday! I'd love to be a Beta Tester, fingers crossed

Blockaroz said:
Hey! Wait! My birthday is today! Uniproject mod dev birthday!
Maybe as a gift we might choose some random people to become... Beta testers.
We have one, but that's not really enough, is it? So... Just wait. We will tell winners.
Click to expand...

Happy birthday!
I'd like to be a beta tester.

For beta testing, join the discord chat. It's easier for us to manage files and roles there

EchoNex said:
For beta testing, join the discord chat. It's easier for us to manage files and roles there
Click to expand...

UberCAKE said:
If I have to use one of those voice call things then it's not possible for me to be a beta tester

Mfw I see myself under Special Thanks