tModLoader Tutorial on how to defeat The Twins in Eternity mode

This is going to be an in-depth tutorial on how to defeat the eternity mode Twins.


Eternity Mode is a modded difficulty added by using both the Fargo's Mutant Mod and the Fargo's Soul Mod. It drastically changes the bosses and enemies' AI and it's projectiles which in turn, makes it more challenging and fun. Wiki here.
@Fargowilta and it's development team, Re-Logic team, and @Terry N. Muse for allowing me to use his videos.
Anyways, let's get started!

The Twins Changelog within Eternity Mode: LinkButton (Scroll down till finds the Twins section in the "boss changes" section)

The gear:
As for preparation for this fight, you should be using:


Aeolus Boots
Frozen/Leaf Wing
Supreme Deathbringer Fairy
Frog Leg
Gutted Heart
Iron Enchantment (Shield of Cthulhu upgrade)
Class Essences
Pungent Eyeball (Summoner)
Bionomic Cluster (In inventory) (Mages)
Melee: Bananarang
Shadowflame Knife
Ranged: Clockwork Assault Rifle with ichor bullets
Onyx blaster with ichor bullets
Uzi with crystal bullets (If so then bring a golden shower for ichor)
Magic: Sky Fracture
Crystal Serpent
Golden Shower
Flesh Hand
Summoner: Spider Staff
Overgrown Key
Armor choices usually goes to titnaium. Shadow dodge's good and you can swap the hardmode ores. For summoners, spider armor is the best choice.
All menacing/lucky on reforges because you want the fight to be as short as possible.
Fargo's Mod adds a Quality-Of-Life feature, which is when you have a stack of more than 60 of the same potions in your inventory, you will have that buff forever without consuming anything while placed in inventory. In that note, these potion's recommended. You can farm potions at a accessories which will negate the need of fishing. Tim's Concotion

Note to beware that there's a buff limit of 22 buffs, so don't bring useless buffs to your class.
Remember, always try the options you haven't tried before, etc different accessories, weapons, and armor.


This fight was done and recorded all by myself.

The Twins in eternity mode spawns in what is, 2nd phase in vanilla, so I'm gonna call it the first phase for now.
There is really, only one change to the first phase, that is the retinazer's lasers now accelerates and inflicts ichor for 20 seconds. so be careful not to get hit by the lasers or it's yourdefensegon
on the other hand, the accelerating lasers change actually makes these lasers more easier and fair to dodge, unlink vanilla ones. but vanilla lasers deals next to no damage

The real trouble begins in it's second phase, when dropped below 50% health.

The main trouble in second phase comes from spazmatism. it will be glowing green and constantly breathing cursed flames which has a larger hitbox than you think. It also dashes like crazy and never stops dashing unless retinazer's doing it's deathray spin, which in this case, spirals out a wheel of 4 cursed flame walls.
However, If the retinazer's in it's second phase and spazmatism's not, when retinazer's doing it's deathray spin, spazmatism will be doing it's usual thing instead of doing it's cursed flame wheel, which makes it 1000% harder to dodge, causing you a lot of headache. Trust me, you don't wanna encounter that situation.
In that case, it's better to try and bring spazmatism to second phase first, and then retinazer. The way I find it to be the best is to bring retinazer to ~24000 health, and then focus on spazmatism. Usually your missed projectile's be chipping retinazer anyways, so don't bring retinazer too low or it'll start second phase early.

Once spazmatism turns into second phase, focus on him for around 5 seconds. Your supreme deathbringer fairy's extremely good at dealing damage to something chasing you closely, and if you bring spazmatism to 1 health it'll be spamming stars and that's absolutely horrible when you're trying to circle the deathray. After so you'll be better focus on retinazer since it has more health. You do want to keep they both's health as even as possible, especially in second phase. or otherwise the one's at 1 health's gonna be spamming stars everywhere and it's annoying as hell.

Do Not try to outrun spazmatism by flying up! once retinazer initiates it's deathray spin high in the air, you'll be guanteed to not circle it in time (unless you rod, but the burning's really gonna hurt)

This is where you'll need to use a bit of brain™ to dodge his crazy dashes.

You'll need to misdirect the dashes. This is what I do:
As you can see, I moved up when spaz's about to dash. spaz cannot change direction while dashing, so when he starts dashing, I falls to avoid the flamethrower. The flamethrower basically "stretched" spaz's hitbox, now much longer, however still controlled by it's main eye's movement. this is basically what Eternity mode wanted us to do, to dodge the extra hitbox by misdirecting the hitbox. If you've seen Terry's early eternity mode Twin's videos, you'll know exactly what I meant.

Anyways, so once you misdirected spaz's first dash, he'll be right in the left-up of you. 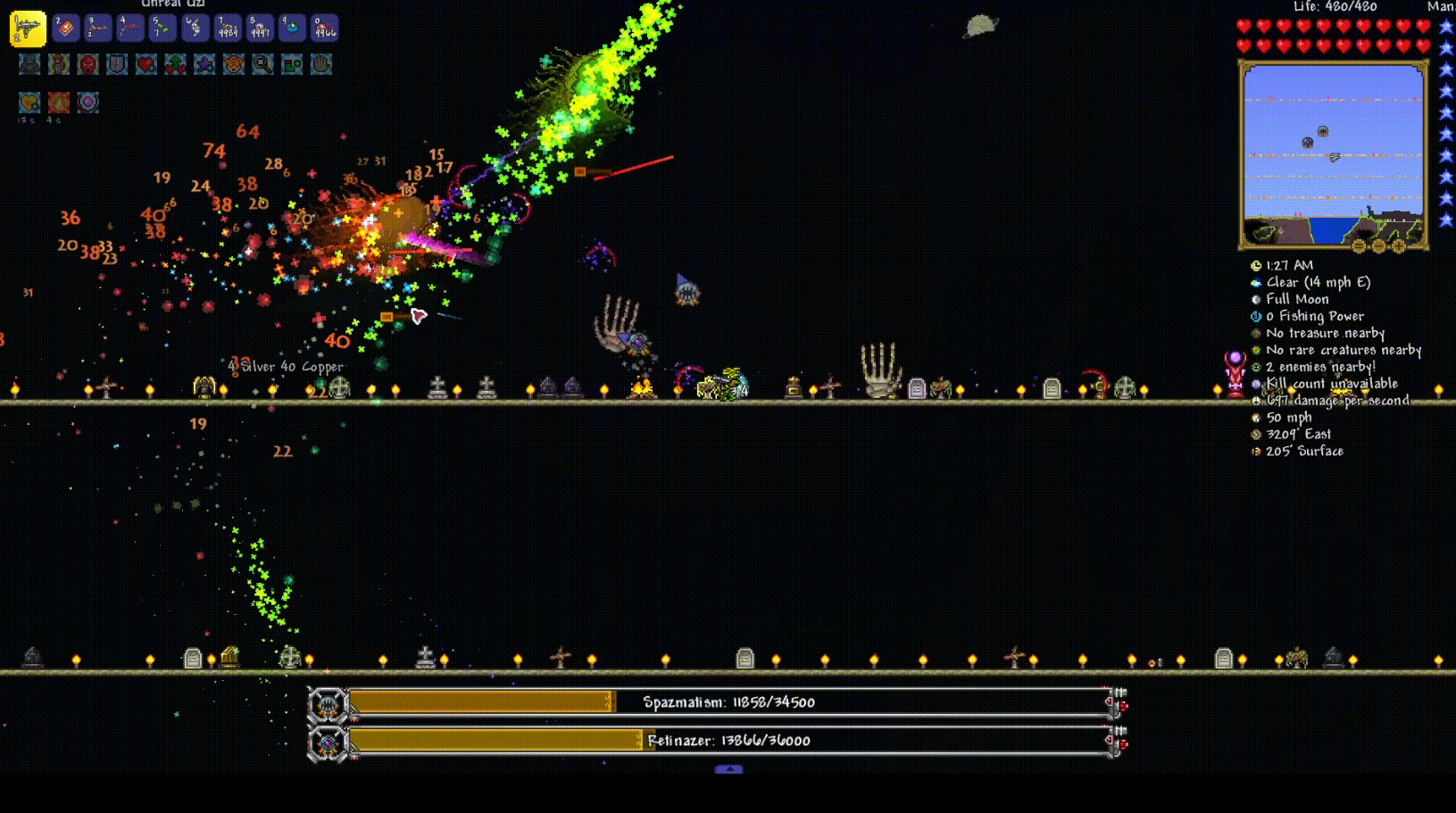 As you can see, spaz's gonna charge again soon. this time, you want to hop off (S) the platform in order to misdirect spazmatism. This move's purpose's not only that, but because of the convenient timing of dashing, you'll most likely stand on the ground for a while enough for the lasers to catch you.
after so, you want to immediately move up. Just press spacebar, and your aeolus boot's double jump will provide enough acceleration for you to dodge the flamethrower.
After the second dash, your position should look like this: 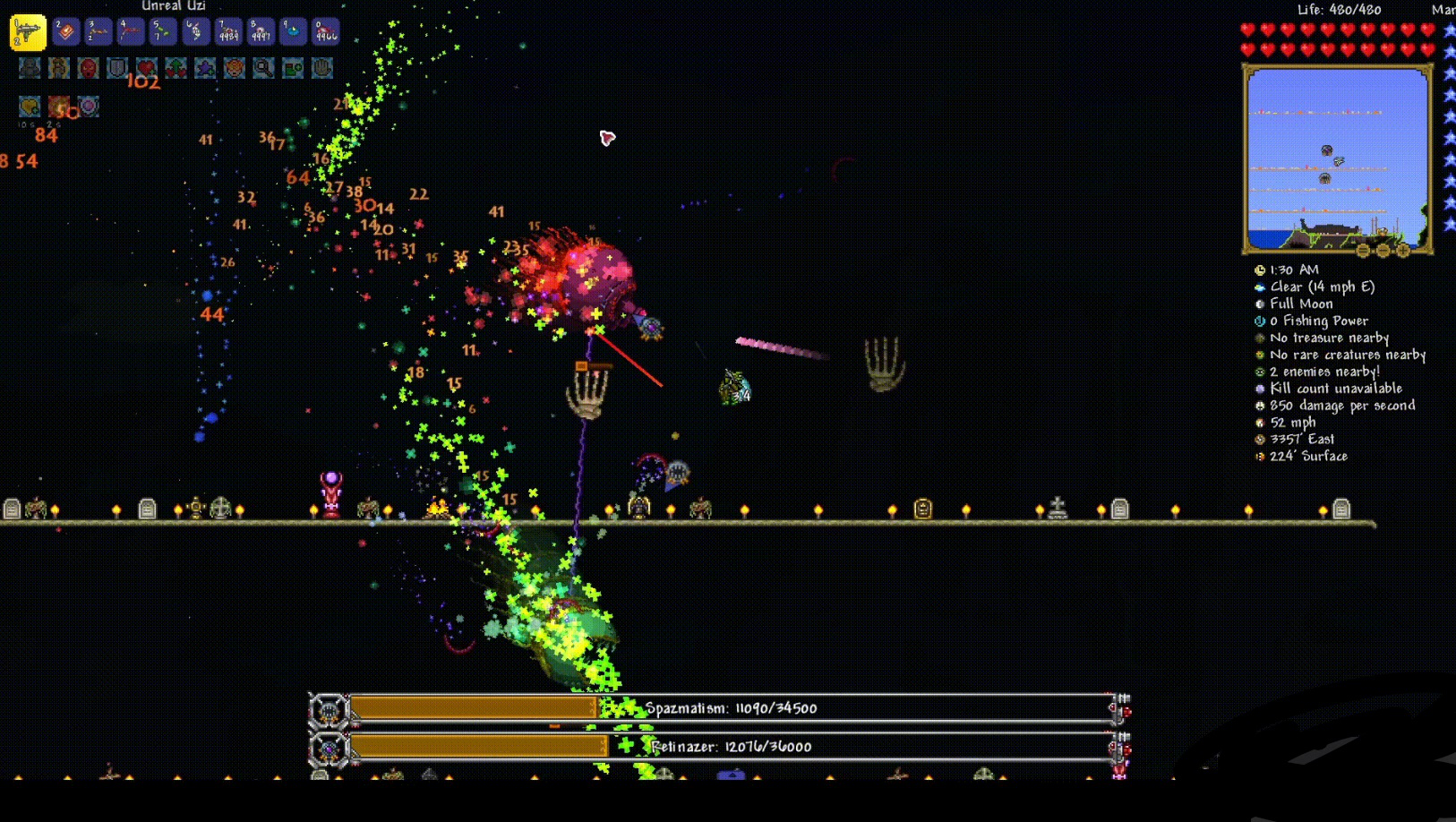 Keep going up till it dashes, to misdirect spaz once again and fall down. Did you notice something? Yea, this pattern then loops on itself! just repeat these steps and boom! you just learned how to consistently dodge spazmatism's crazy dashes!
Practice until you get the hold of it.

There's only one difference... is that it now shoots a LITERAL DEATHRAY 540° across the entire screen once and a half... For this attack, spazmatism's gonna move to the same location as retinazer, and spews a spinning cursed flame wheel moving the same direction as retinazer's deathray.
So here's how you do it:
If you look closely, you can see that the cursed flame wheel actually move slower that the deathray! and that, ultimately means which means you have to get in just the right time in order to appear right at the opposite side of the retinazer's deathray as well as it's direction while staying close to it. here's what I meant: 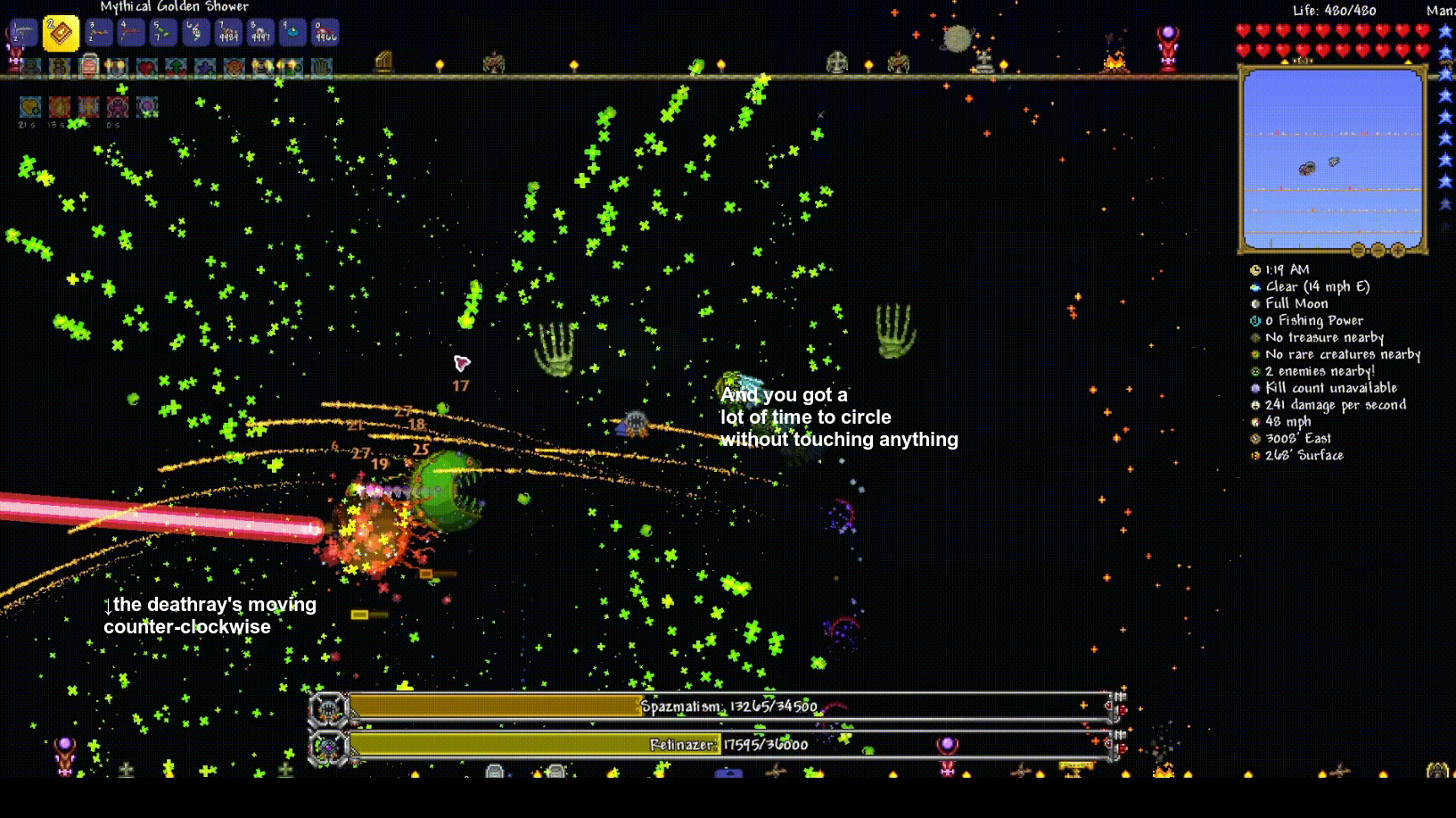 This way you won't get hit by the deathray because the wheel's not fast enough to outrun it or you'll take several hits from the wheel regardless. (unless you rod but 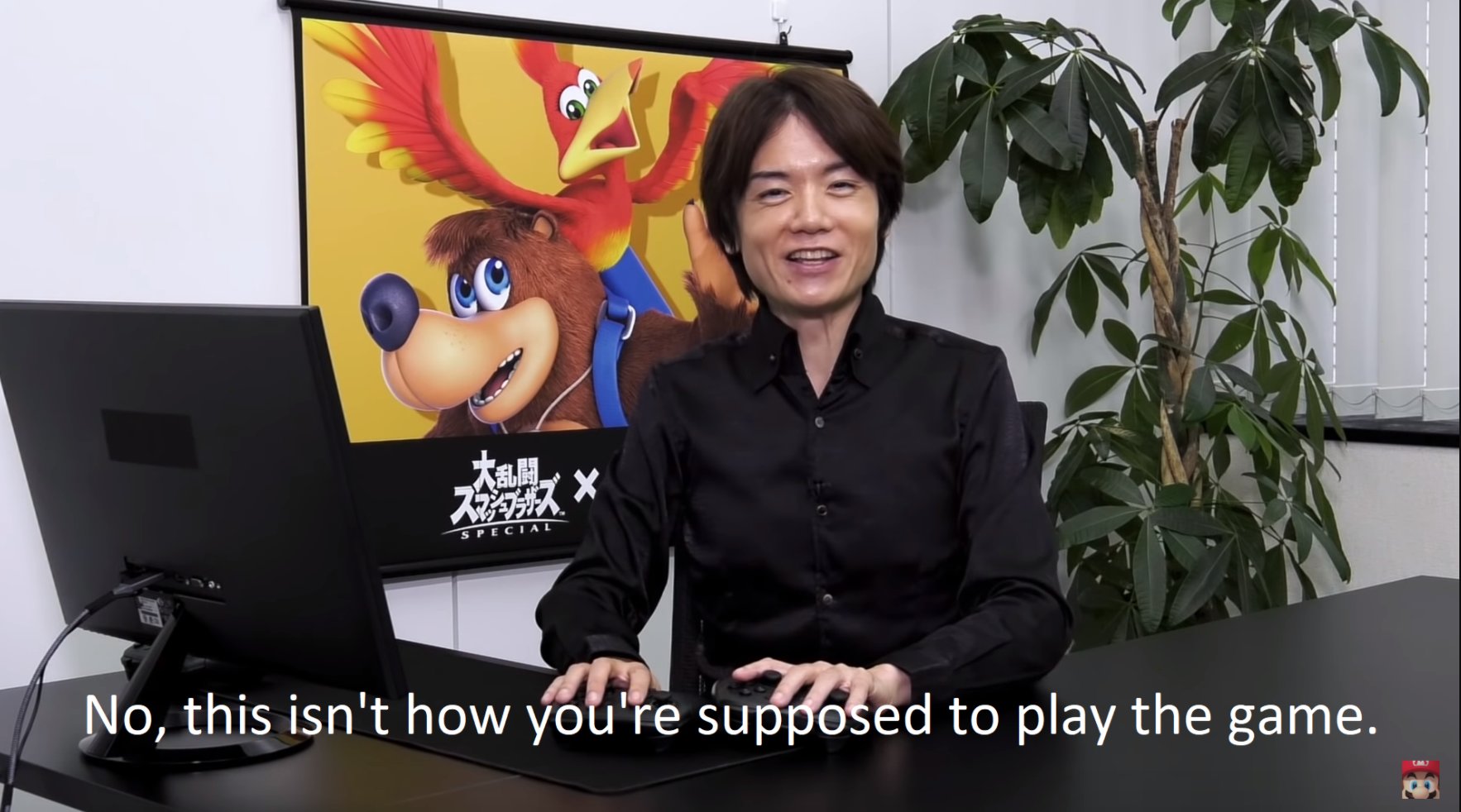 Actually I felt kinda cheesy doing this plus it's not like it's unfair or anything like that and you'll learn it later
How do you do it, You ask? Well...
Simple. Never go to the opposite direction of spazmatism's wheel while the deathray was initiating. In other words, join the wheel BEFORE the deathray initiates immdiately, Or this will happen:

I'm just trying to recreate the issue here.
After you did so, dash away and repeat the strat above.
As always, practice makes prefect.

Part III: Chittalk Conclusion
In any case, the Twins' always one of my favorite boss in eternity mode! It is very fun, and it's arguably the best mech out of all! Anyways... Hope this tutorial helped you, leave your suggestions down below because this is my first tutorrial ever posted on this forum, and...
[Insert Outro here]
Last edited: Jan 7, 2021

Bed_breaker117 said:
All I can see from the pictures is a mess of attacks from the twins XD
Click to expand...