TerraCraft - A fangame of Terraria and Minecraft

Welcome to the TerraCraft project!
​
Introduction

After Terraria: Otherworld was officially announced to be terminated, I decided to make a fan game of Terraria, which named TerraCraft. I've been working on TerraCraft project since at least September 2018, and it takes me about two years to finish the first TerraCraft version.

TerraCraft is the first 2D sandbox platform game which allow you to play on an INFINITE world in one map. TerraCraft uses a dynamic chunk technology similar to Minecraft, so every world you create is infinite. TerraCraft’s unique portal system can save all your locations for teleportation, allowing you to explore more secrets of the unlimited world!

The current version of TerraCraft implements infinite map width, and also implements the surface layer, the underground layer, and the nether layer. In future updates, more layers will be added to create a world of infinite height and infinite depth and make TerraCraft truly become an infinite world!

TerraCraft supports multiplayer mode, you can run the TerraCraftServer and play this game with your friends! 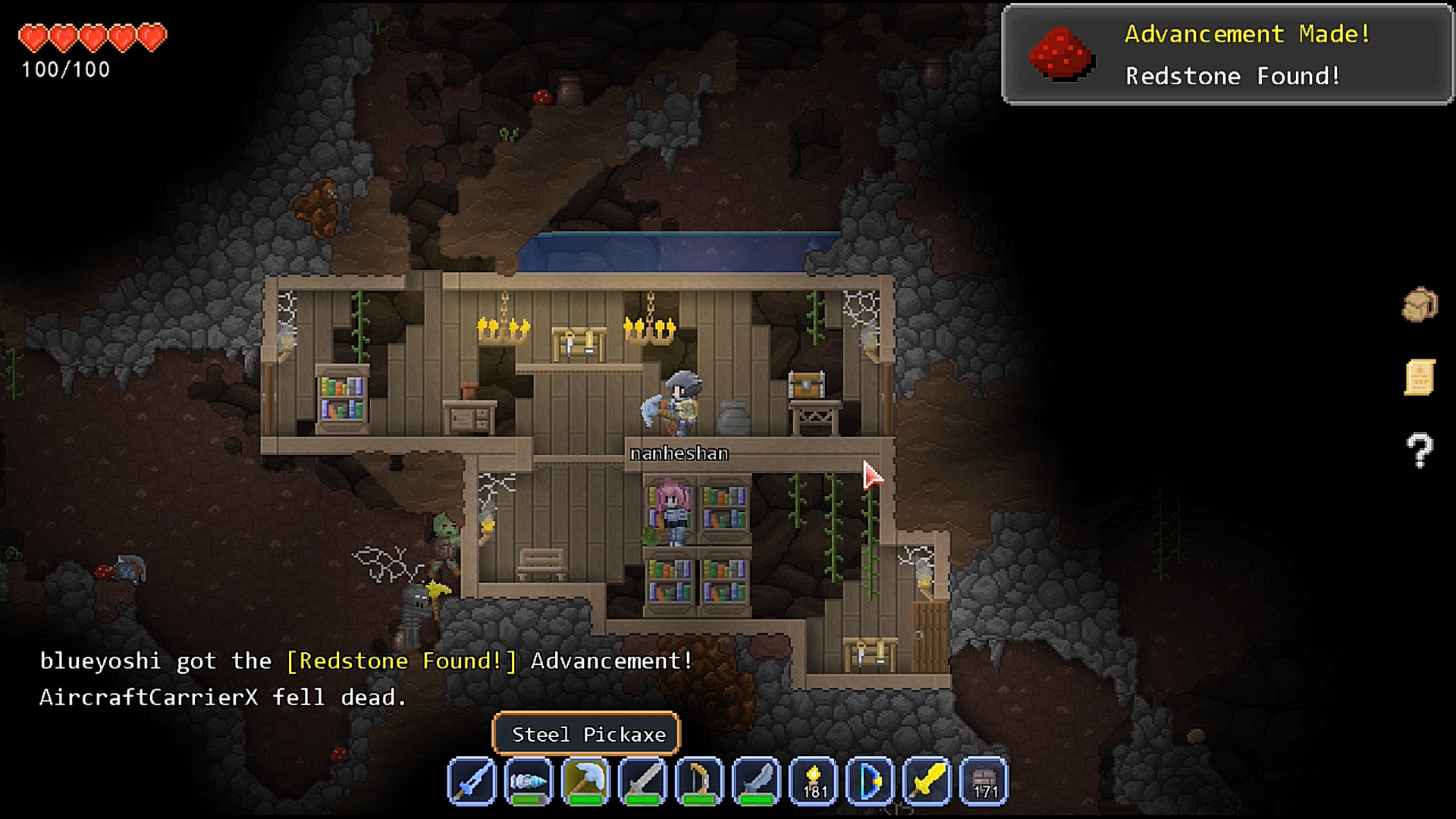 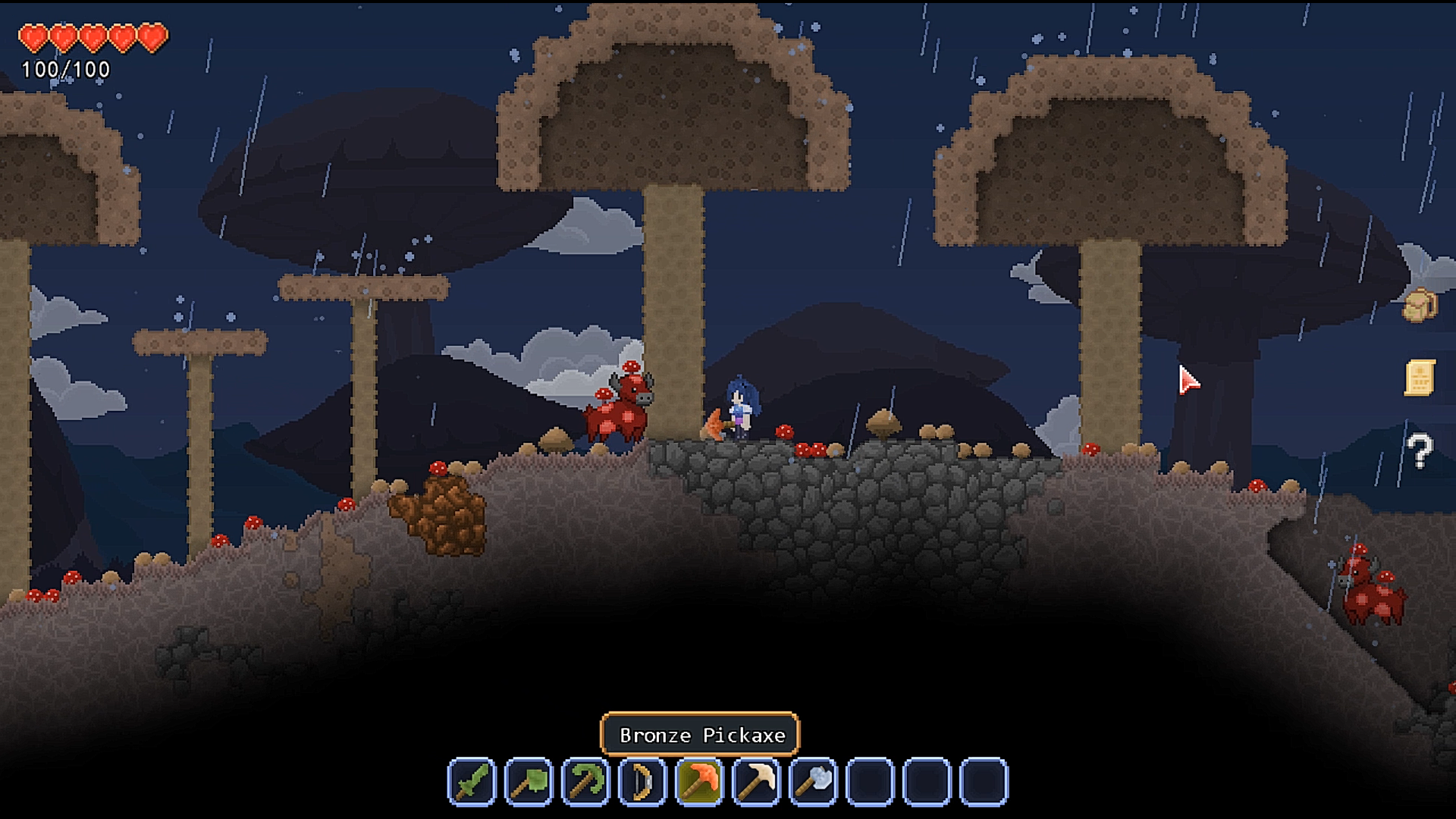 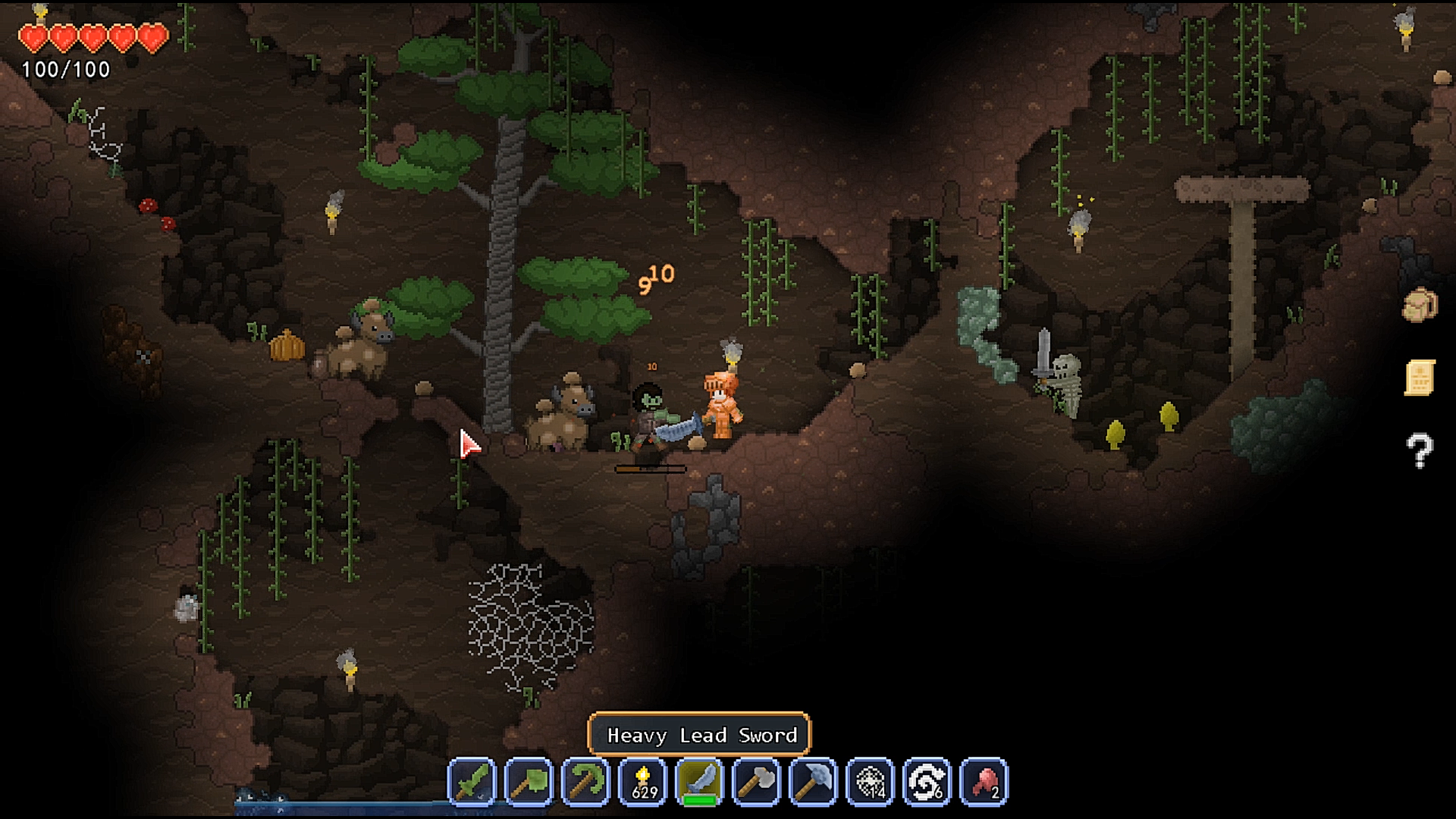 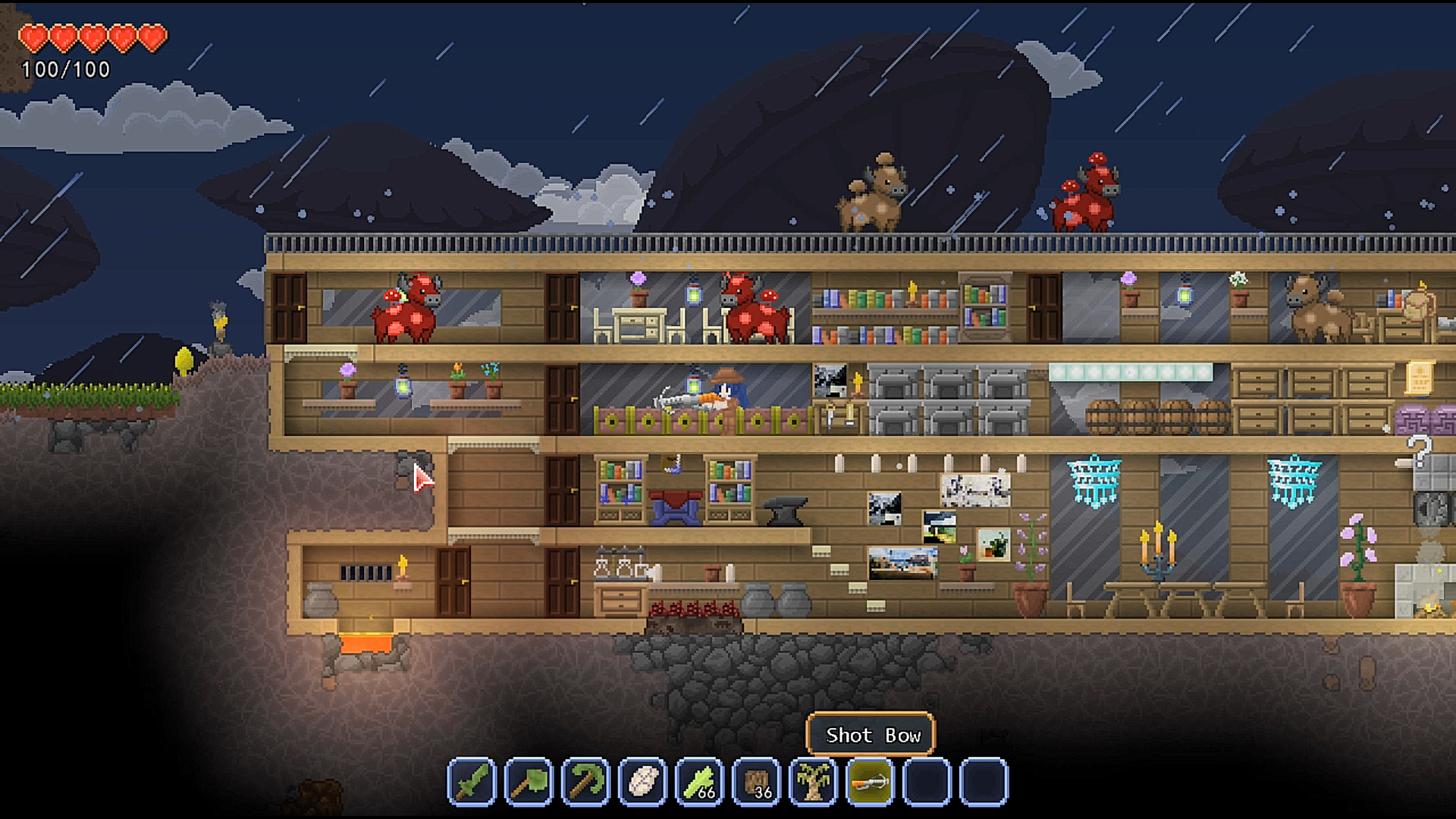 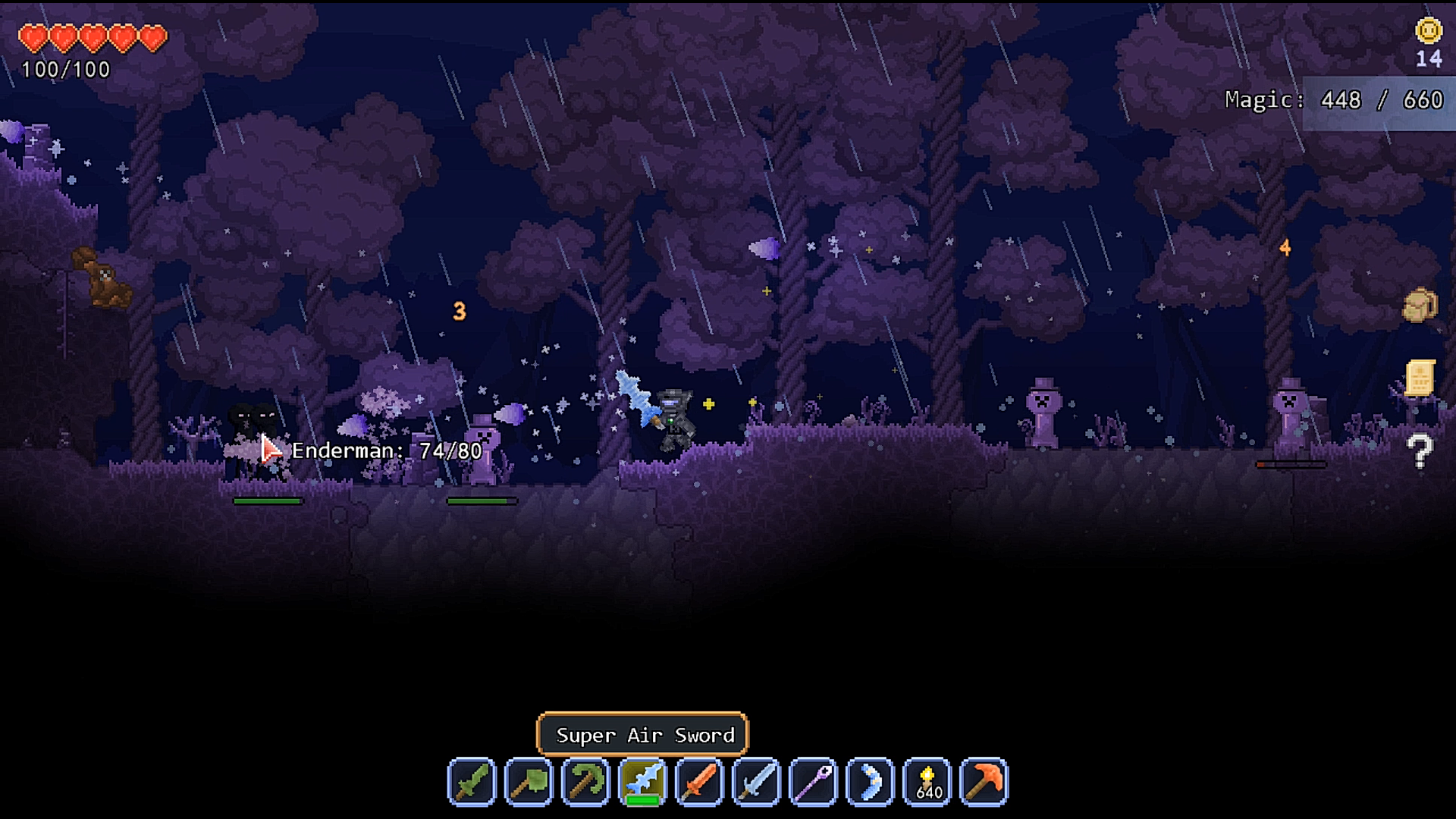 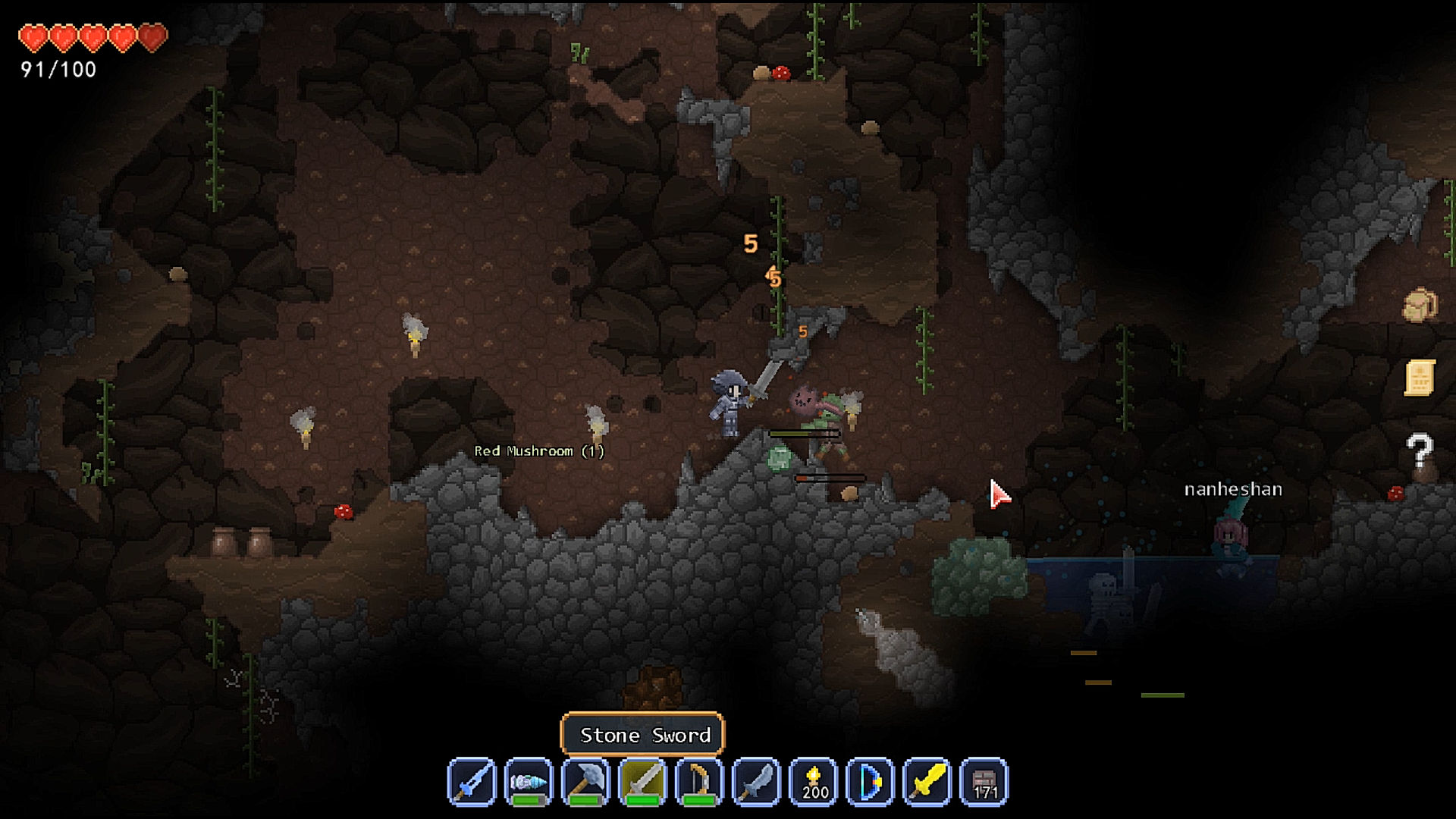 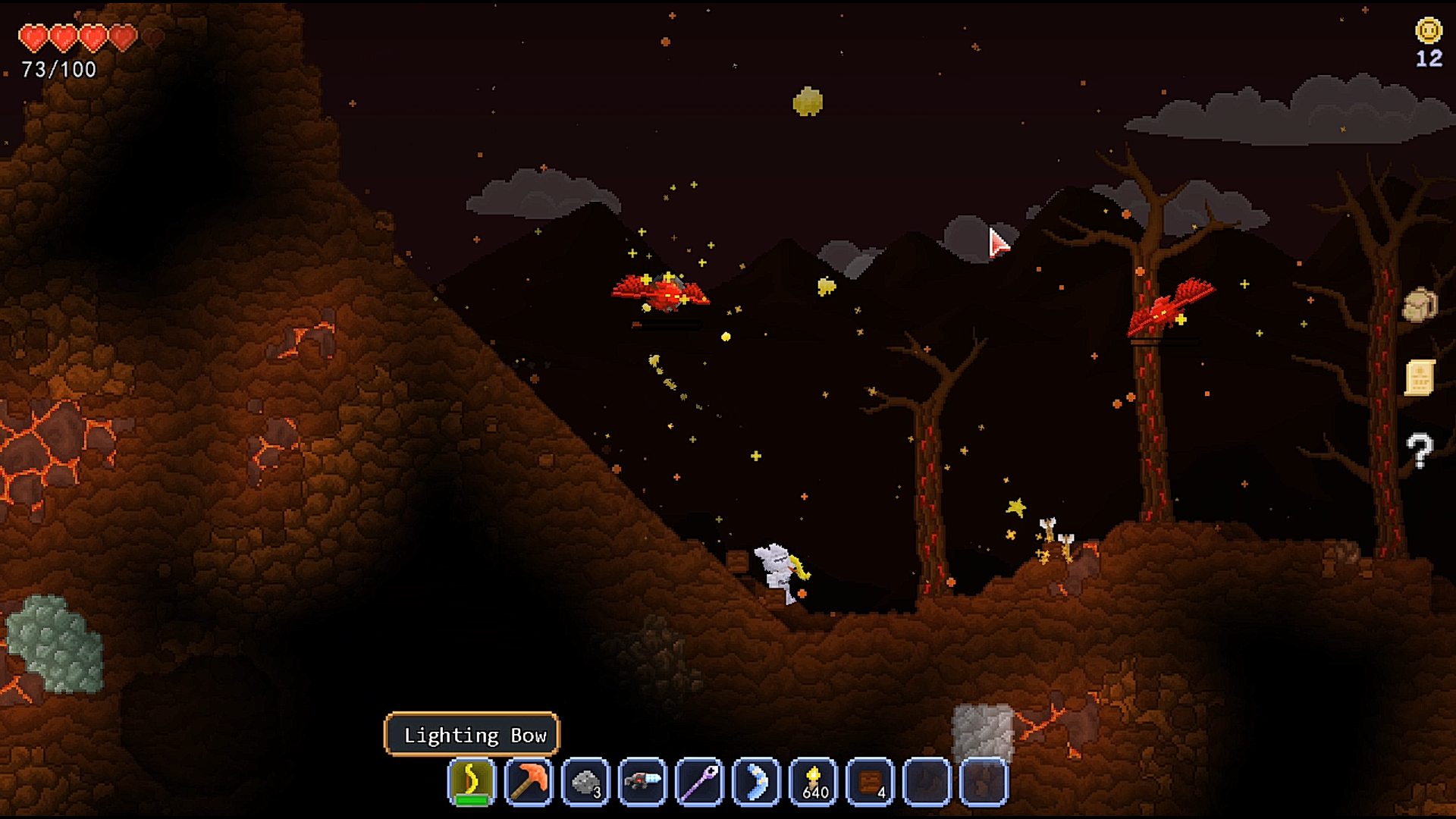 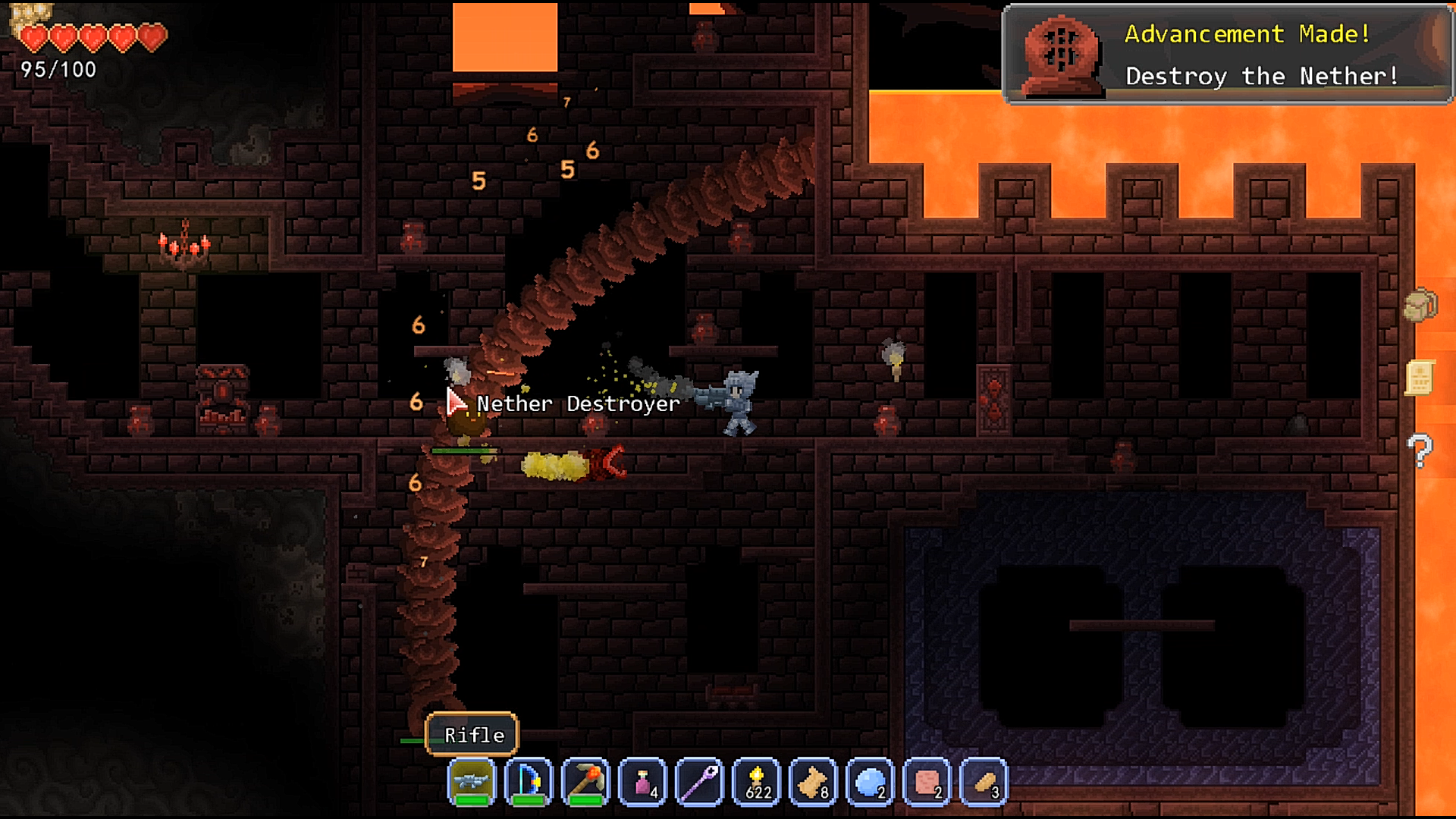 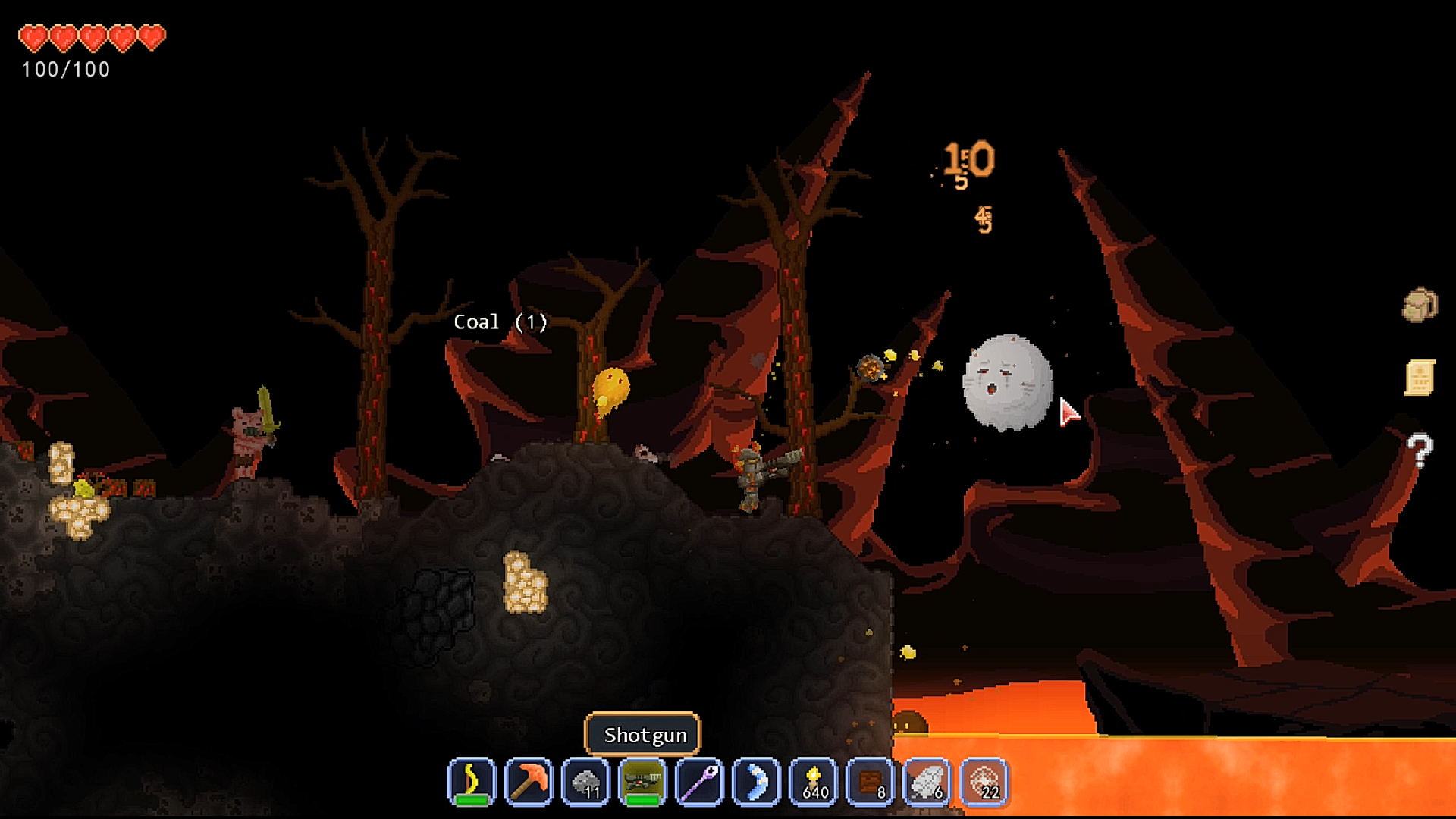 Making an infinite world is my childhood dream. There is my plan for how to design the infinite world.
Each layer has a unique way to reach, so you don't have to dig down all the time.
These layers will be implemented in the future.

Q: What is TerraCraft? Why develop TerraCraft?
A: TerraCraft is just a non-commercial fan game of Terraria and Minecraft, created by skyblueyoshi (yes I'm also a mario fan and my name just comes from a yoshi in the mario fangame smbx). I developed this game to practice algorithms, software engineering practices and C++ game engine practices. Therefore, this project is only used for learning and communication, and will not be released on commercial markets such as steam. This is a TRULY FAN GAME, so this game cannot be compared with the great commercial 2D sandbox games on steam such as Starbound, Junk Jack, Signs of Life, Crea, Planet Centauri etc.

Q: Why I can't play the game?
A: According to the feedback collected from many players so far, here is a checklist for you:
1. The compressed package must be decompressed and cannot be run in the compressed package. You should unpack .rar before run this game.
2. If you just want to play the singleplayer game, you should run the TerraCraft.exe instead of TerraCraftServer.exe.
3. Make sure that the system's "My Documents" path is valid, and the game can correctly create a "TerraCraft" folder in the "My Documents" path.
4. Make sure that DX9 is installed on the computer.
5. Make sure that VC++2015 is installed on the computer.

Q: There is an error 0xc00007b?
A: Download and install DX9. The solution is the same as the above question.

Q: "The code execution cannot proceed because MSVCP140.dll was not found. Reinstalling the program may fix this problem."
A: Download and install VC++2015 here:
https://support.microsoft.com/en-us/help/2977003/the-latest-supported-visual-c-downloads
Just Download x86: https://aka.ms/vs/16/release/vc_redist.x86.exe


Q: Why does the server report an error?
A: In order to quickly expose potential problems, developers have added a large number of assertions (ASSERT), so an assertion error will occur before the preparation fails. If you are a server owner, please be sure to send a complete screenshot of the assertion error report to the bug-report channel of discord to help me solve server-side problems in the future.

Q: How to control?
A: After entering the game, click the question mark on the right to view all operations in the first advancement.

Q: How to place or dig the wall?
A: Press the SHIFT key and the left mouse button to dig or place the tile as a wall. See in the previous question.

Q: How to search the recipes?
A: The first method: Click the middle button on the right, or press the R key to open the recipe search interface, and search for the desired recipe in the items on the right.
The second method: Click the "?" button near the 2×2 crafting slots on the backpack interface, and click the item you want to query.
Generally speaking, the left-click on an item is to search all the recipes that get the item, and the right-click on the item is to search all the recipes that use the item as the input source. The design of the recipe system comes from the NEI mod of Minecraft.

Q: Is there an official server?
A: No, because it is a fan game and I am still a student, I don't have the ability to buy server. Please solve the related financial problems of the server by yourself.

Q: What operating systems does the game support?
A: Windows XP and above, but some older XP systems may not be supported due to the loss of components.

Q: What is the best resolution of the game?
A: It is recommended to use 1920×1080 as the full screen resolution (the maximum resolution of a general home laptop). Due to my lack of programming experience, the game currently does not support 4k screens.
Last edited: Sep 5, 2020

This looks really cool! Will there be any new bosses added to the game?

Also, it's a bit strange how you can get shulker boxes that early on.

It looks fun, sadly currently I can’t play on my computer, and from what I can tell, it seems like terraria otherworld looks kind of bit not completely, I really like the style, seems like the game would be fun, I’ll check it out when I can!

Wow! Looks great, how long has it been in progress? Edit: Oh silly me there's a log.

Etotheipi said:
Wow! Looks great, how long has it been in progress? Edit: Oh silly me there's a log.
Click to expand...

The game started development in September 2018, and it took about 2 years.

Is there any way to change the controls? The controls seem similar to default minecraft controls but since this is a 2d game I'm instinctively trying to use terraria controls and I keep throwing my items!

qwerty3.14 said:
Is there any way to change the controls? The controls seem similar to default minecraft controls but since this is a 2d game I'm instinctively trying to use terraria controls and I keep throwing my items!
Click to expand...

Oh man it was wonderful
First cave i entered there was a nether portal but i will go there tomorow
And i hope you implement a way to make some animals to not despawn cause i found a black rabbit it was so cute but when i died and came back to home my purple shep and the rabit wasn't there ;-;
However i hope you update this and make it as cool as both games are
Last edited: Aug 24, 2020

This is a redstone wire system test. The operation is based on tr and the crafting recipes are based on mc. You need a spider string and one redstone to craft one wire. You can also get the strings from cobweb.

You misspelled 'silver' as 'sliver' in every piece of silver gear or is this actually supposed to be a fantasy metal known as sliver?

I would like to ask something, we will have bosses from both of the games? Like, the Wither, Eye of cthulhu (I always have problems to write this), cause i would love to see bosses from both games in one.
Sorry if i annoy, just a question.

About the infinite world of terracraft, I spent a lot of time researching this function and finally implemented it using hash chunks technology. In the public test phase, this technology performed very well. I hope terraria 2 can also make infinite world, it is not too hard to impl.
There are chunks and sub-chunks, and both style of chunks has their different functions. A chunk is a 1024*1024 area, which runs the dynamic world generator and checks every player entities for loading or unloading. A sub-chunk is a 32*32 area, which handles mob spawning and runs every block entities such as furnaces and brewing stands. Once I have the time to create a wiki website I will write the detail.

qwerty3.14 said:
You misspelled 'silver' as 'sliver' in every piece of silver gear or is this actually supposed to be a fantasy metal known as sliver?
Click to expand...

lol, my bad. It's actually called 'silver'. I am not very familiar with some english words and I'll fix it next version. Thanks for pointing out the translation problem, I hope you can report more misspelling problem.

Dark Digitus Awoken said:
I would like to ask something, we will have bosses from both of the games? Like, the Wither, Eye of cthulhu (I always have problems to write this), cause i would love to see bosses from both games in one.
Sorry if i annoy, just a question.
Click to expand...

The early version of terracraft only has two bosses: the Nether Destroyer and Snow Queen. The Nether Destroyer lives in nether fortress and you need to break the altar to summon it. The Snow Queen sleeps in aurora palace and you should right-click on the glass ball to wake up the queen.

About MC's bosses: Because it is an infinite world, my plan is to impl more layers (under the Nether layer, or above the Surface layer). I will impl the Crimson Forest layer firstly and impl the Twilight Forest layer secondly and next impl the End layer in space. The Crimson Forest layer I will add the Wither as a boss. The Twilight Forest layer will has more bosses such as Naga, Questing Ram, Twilight Lich, Minoshroom, Hydra, Ur-Ghast, Knight Phantom etc. They are the Twilight Forest Mod's bosses and I like this mod very very much. And I will add the Ender Dragon in the End layer (in space). My plan is that the players must wear spacesuits or some other things in the end layer, otherwise the player will die of suffocation or cosmic radiation.

About TR's bosses: I plan to add tr bosses which after the Wall of Flesh and make them live in deeper layers. For now I have no clear bosses plan yet.

I have watched a lot of tr mod videos, so I have a lot of ideas about how to design the bosses.
Last edited: Aug 24, 2020

skyblueyoshi said:
The early version of terracraft only has two bosses: the Nether Destroyer and Snow Queen. The Nether Destroyer lives in nether fortress and you need to break the altar to summon it. The Snow Queen sleeps in aurora palace and you should right-click on the glass ball to wake up the queen.
Because it is an infinite world, if I can impl the Twilight Forest layer (under the Crimson Forest layer, which under the Nether layer), I will add more bosses such as Naga, Questing Ram, Twilight Lich, Minoshroom, Hydra, Ur-Ghast, Knight Phantom etc. They are the Twilight Forest Mod's bosses. The Twilight Forest layer is the best layer for fighting bosses. Also I plan to add tr bosses after the Wall of Flesh in deeper layers and make them harder.
Click to expand...

I have several ideas for bosses, if you want to hear them. And several ideas for other things, but the decision is yours. By the way, I think you should work on modifying the character. But still the game looks great.
I like this idea.

avengers endgame was the most ambitiuos crossover in history they said

glitch_zvirus said:
avengers endgame was the most ambitiuos crossover in history they said
Click to expand...

Thanks for supporting my idea!

Also you may not be wrong.

This looks super promising. I love the idea of an infinite world with different layers. I hope you get far with this!