Happy New Year! Welcome to the first Terraria community address of 2019. We’ve got some exciting details to share below so check them out!

Presently, the team is working on the next patch release which is focused on fixes for several graphical issues that have been requested from our partners at Re-Logic. This also includes some fixes for a couple of conversion issues that arose after the SDK update. We’ve seen the reports from the community and wanted to confirm this will be addressed.

Many fans have been asking us about when the next content update will arrive, and we’re happy to share that work has begun on integrating version 1.3.1 into the console platforms. Expect additional details on our content plans moving forward after the next patch releases. That said, the PS4/XB1 team would like to leave you with a little teaser of the Radial Hotbar running on Console: 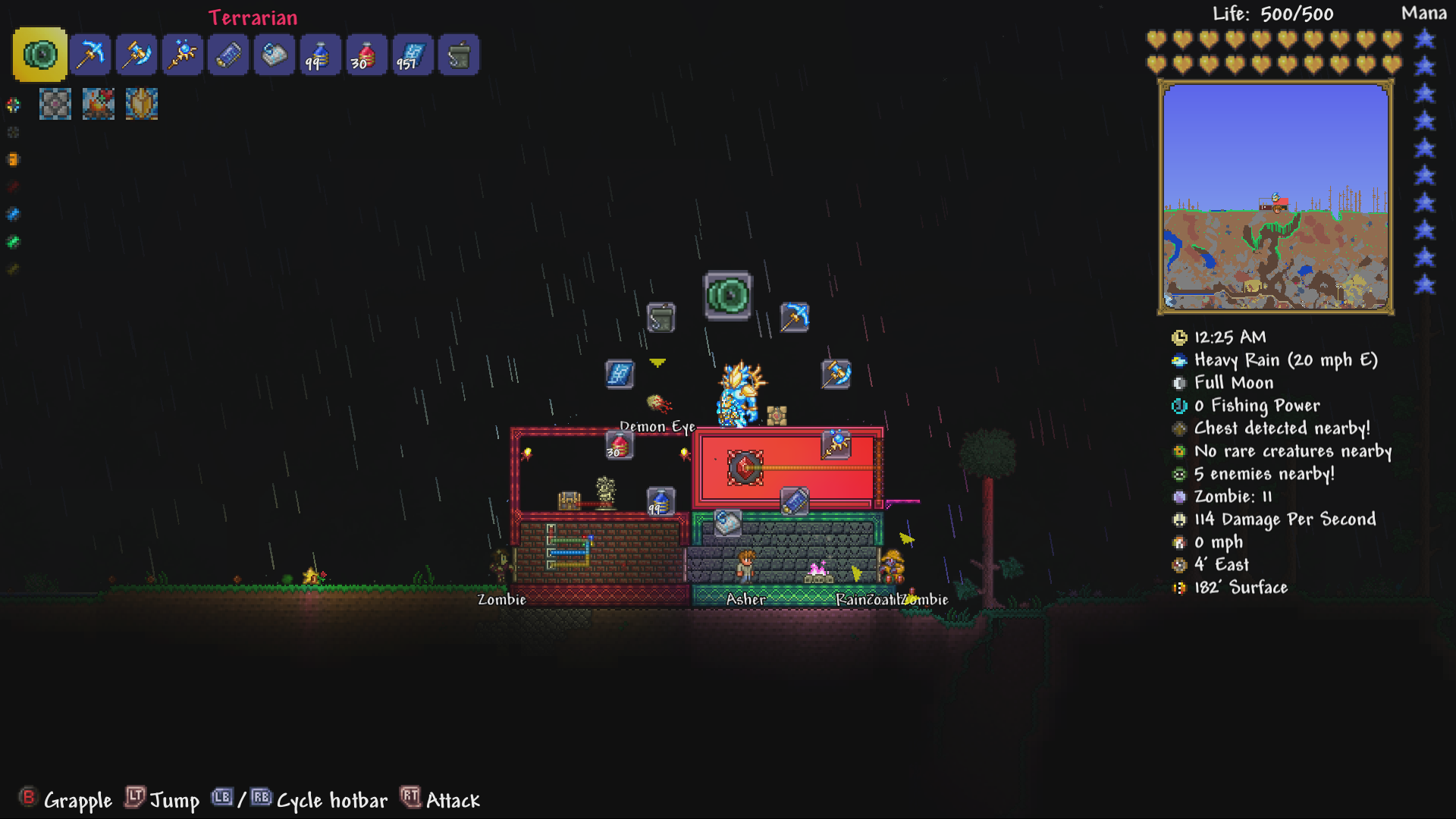 The team at Pipeworks is happy to announce that we’ve hit a major milestone in Switch development. Our alpha build has been submitted for review, which means major gameplay systems are in-game and ready for Re-Logic to check out. Pipeworks will be focused on our beta milestone now which means bug fixes, polish, and addressing other feedback from both 505 Games & Re-Logic.

Expect Switch livestreams, feature showcases, and other forms of content to start appearing in your feeds as we get closer to beta.

The team is thrilled at the state of our alpha build and we can’t wait to show you all the work that has been going on behind-the-scenes! It’ll be worth the wait.

Every day we are making excellent progress towards reaching a global release of 1.3 on mobile. We do read the 1.3 comments spanning the internet and appreciate the patience.

During our development work, we try to split the game into certain areas to focus on and refine – getting the foundation right before moving on. For example, over the last month we were concentrating on crafting, the inventory and equipment.

The DR Studios development team (who are all huge fans of the game) are excited with how the game is starting to feel and play. Their focus has been trying to make each area of the game feel comfortable and natural as can be regarding the UI and controls.

We truly believe the Terraria community will be thrilled when they ultimately see the improvements made with 1.3, and we are looking forward to showing some of these off in the near future

As we march ever-closer to Terraria 1.3.6 on PC, we wanted to take a minute to share another little teaser to quench your thirst for information. As we mentioned previously, one core focus for 1.3.6 is taking another look at everything in the game from top to bottom. The team felt that the Desert was one biome that needed a lot of love…

Introducing the Scarab Bomb! Unique to the Desert Biome and descended from the ancient beetles of legend, these handy helpers make digging long tunnels or shafts a breeze!


Of course, this is just one of a handful of tweaks and new aspects we have added for the Desert – amidst many more across the entirety of the game. We are looking forward to sharing more progress in the weeks ahead and to getting 1.3.6 in your hands as soon as it is ready!

505 GAMES​
We are proud to announce the newest addition to our team, legendary strategy gamer Stephen “MrGameTheory” Takowsky who will serve as 505's Terraria Brand Community Manager.

MrGameTheory has been spending part of his days testing Terraria on the Switch and Terraria 1.3 on Mobile.

He will be making some Terraria community announcements soon. He is looking to build a community team of fellow Terrarians who are passionate about helping the Terraria community. For now, please feel free to join us at Discord.gg/505Games and send him a message with your gaming background and how you believe you can help.

He can be found here on TCF - @MrGameTheory - so stop by today and tell him hello, welcome, and best of luck!
Last edited by a moderator: Jan 28, 2019

Those Scarab Bombs look like some very cool shaped charges! Excited to see what other love the Desert biome got

Are you sure its still 1.3.6 and not 1.4 at this point? I mean sure no major game advancements added anymore but still the already shown teaser for 1.3.6 are already INSANE

Staff member
Re-Logic
Administrator
This makes those underground railroads so much less painful to build....

Can't wait for 1.3.6! Was hoping for an actual release date, but hopefully it's soooooooooon

Staff member
Moderator
Wow, lots of exciting news for every platform! 2019 looks like a promising year for Terraria!

Squazzil said:
Can't wait for 1.3.6! Was hoping for an actual release date, but hopefully it's soooooooooon
Click to expand...

We will share release dates as soon as we can, but until then expect spoilers and news on our progress

Please tell me there is a ui slider for console in this upcoming update. Haven't been able to play in months

Snowrain said:
Are you sure its still 1.3.6 and not 1.4 at this point? I mean sure no major game advancements added anymore but still the already shown teaser for 1.3.6 are already INSANE
Click to expand...

Honestly, I wouldn’t call it 1.4 worthy.
There’s nothing that’s top-notch game changing that have been shown in the teasers so far. 1.4 was already confirmed to have creative mode.

The snow biome needs some love too!!! Maybe some new enemies, possibly even event exclusive ones??

InstaFiz said:
Honestly, I wouldn’t call it 1.4 worthy.
There’s nothing that’s top-notch game changing that have been shown in the teasers so far. 1.4 was already confirmed to have creative mode.
Click to expand...

Yeah, there's been a lot of cool things added, but 1.1, 1.2, and 1.3 were total paradigm shifts. So far 1.3.6 looks like a bunch of changes to weapons, some new furniture, some minor new content in places, and some new weather graphics I seriously hope I can turn off. I love that the game is still being cared for regardless.
Last edited: Jan 28, 2019
B

Thanks for all of your amazing work. Greetings from Germany

You have my interest yet again because of those scarab bombs. I have full faith that you can pull such a fantastic update for 1.3.6, as well as progress towards the console and mobile updates. The more I hear about 1.3.6, the more I can't wait to get my paws hands on it.

for the mobile version of the game will this next update be the update to add all the event/bosses/item encluding the moonlord and stuff? if not when do you expect the update to role out

FullMojoRampage said:
for the mobile version of the game will this next update be the update to add all the event/bosses/item encluding the moonlord and stuff? if not when do you expect the update to role out
Click to expand...

Yes, the next update will feature all of the content up to 1.3. So nothing from 1.3.1 and up, but it will have the Moon Lord.

Underground passageways without dying of boredom for being 3 hours working! Now it will only be 1:30