Terraria State of the Game - September 2020

Greetings Terrarians!
At long last, the cooler temperatures of Fall are descending upon us! We hope that everyone is remaining safe out there, and that back-to-school has gone well for those who have done so (be it virtually or in-person). 2020 only has a few more months left - so hang in there! There is so much going on with Terraria right now, let's dive right in!


The 1.4.1 update for Terraria on PC is getting ever closer. We have pretty much wrapped up almost all of the additions, and the current focus for most of the team is on bug fixing and polish before we can get the latest juicy content into your hands. How much longer, you say?

We are feeling pretty confident that we will have Terraria 1.4.1 in your hands sometime during the month of October! We are still nailing down a few pesky bugs where we are not sure how long they will take to fix, so we do not have an EXACT date just yet... but prepare now for the treats of 1.4.1 before Halloween - no tricks here!

TERRARIA SOUNDTRACK: VOLUME 4
Pretty much all set to go, the latest tracks for the Terraria Official Soundtrack will be submitted everywhere once 1.4.1 is released! This means a release on Steam first (adding to the full Steam OST), to be followed by the Volume 4 tracks on digital distribution and music streaming services.

Be sure that you are up-to-date with the latest and greatest on this front via the Hotfix Changelog... and keep your bug reports coming via the handy bug report button below!

The tModLoader Team remains hard at work on getting TML up to the 1.4 era. Community Contributions are most welcome! If you would like to help out or learn more, check out the tModLoader Discord > https://tmodloader.net/discord

Hopefully, it will not be too much longer!


XBOX & PLAYSTATION​
So, last month we had the big announcement that Console/Switch Terraria development would be moving from Pipeworks over to DR Studios. We hope that everyone took some time out to thank Pipeworks for their efforts to bring Terraria 1.3 to Consoles and to reflect on this era. Of course, that leads us directly into the next era of development for Terraria on Consoles and Nintendo Switch. To be fully transparent, the DR Studios team has been mostly focused on getting Terraria Mobile 1.4 over the finish line (more on that in the Mobile section) - however, we wanted to take a minute to show a little something that you might find interesting...


That's right, Console Terrarians, Terraria 1.4 is officially alive and running on Consoles! Now, before we get ahead of ourselves, we have to be clear that this is still a pre-Alpha build, and there is a lot of work left to do in order to deliver Journey's End to all of you. Once Mobile 1.4 is wrapped and hotfixed, the almost full focus of the team will shift towards Console. We will be spending lots of time looking at performance, user interface, gamepad, etc, etc. As we have more to share and show there, we will - but we are pretty excited about what we have planned.


As always, we know everyone wants to know "When?!?" - we are not quite ready to dive into timelines just yet, however, once we get a bit further down the development path, we should have a better understanding of just how much remains in front of us to get done. That said, we surely hope you share our excitement at seeing at least a little taste of what is to come when Terraria: Journey's End reaches Consoles!

As Switch Terrarians will have noticed, the long-awaited Splitscreen update for Terraria on Nintendo Switch released over the last few weeks. As with any release, crazy bugs have a chance to rear their pesky heads - in this case, with some rather "revealing" results . In regards to this release, we have gathered a ton of feedback and information from the community around any new bugs (including the whole "naked" characters thing, which was related to a dye bug), and Pipeworks will be looking into a final fix patch for Switch before they transition away from Terraria. Definitely want to have things in a good place before that - so stay tuned for more information here!

Back to Table of Contents

We have admittedly been a bit quiet on the spoiler front this month, as it has been all hands on deck with bug fixing, polish, and iteration on a lot of the new features. For example, this week the team has been spending some focused time iterating around button mapping and UI for our gamepad players. This is really beneficial work as it will pay dividends for both our Mobile and our Console/Switch friends down the road.

So, where are we at this point? Pretty excited, that is where we are right now. Why is that? Two reasons really...

First off, we get to show off our favorite new boss - the Empress of Light! (with a special guest appearance by a certain endgame sword that begins with a Z)

What's that? You missed it? We caught sight of this mysterious "Z" at the beach last weekend as well...


Remember that these are still development builds, so some things - especially UI pieces - are subject to change and you may always see a bug or three.

​
So, what is the second thing that has us excited? We are amped up because it is almost October - and October is one of our favorite months. Who doesn't love the fall leaves, cool temperatures, Halloween... and the release of Terraria: Journey's End on Mobile?

That's right - our current plan is to launch Terraria: Journey's End on Mobile in October!

We aren't QUITE certain exactly what day yet - but the team is feeling confident enough in the work thus far and the work ahead that we are pushing towards an October release. If anything changes - either we arrive at an exact date or something goes horribly wrong and we have to push it out (surely not!) - we will let you know immediately. So get excited, Mobile Terrarians, for something awesome is coming your way very soon!


We are looking forward to sharing the latest and greatest as development plows ahead - for Mobile and for Consoles - stay tuned!

Lots of new stuff on the Terraria merch front - either already out or coming soon! For this SOTG, we are going to take a moment to feature the latest and greatest from Sanshee. Watch this space for new Terraria merchandise offerings from both Sanshee as well as some new partners that we have not yet revealed!

Our fantastic partners over at Sanshee have just released the second pin in the Biome Pin Series - this one based on the Desert Biome. Pick one up... or grab both if you missed the Forest Biome Pin earlier this year. Of course, Sanshee has plenty of other epic Terraria items in stock, so if you haven't checked these out yet, make sure you do so. Plenty more is planned in this space - both pins and more, so make sure that you bookmark that Sanshee Terraria page today!

Terraria merch officially licensed by Re-Logic, brought to you by Sanshee. Shop pins, apparel, shirts, posters, and blind bags from from the series. Side-scroll your way to a new adventure today! Copper sword included! 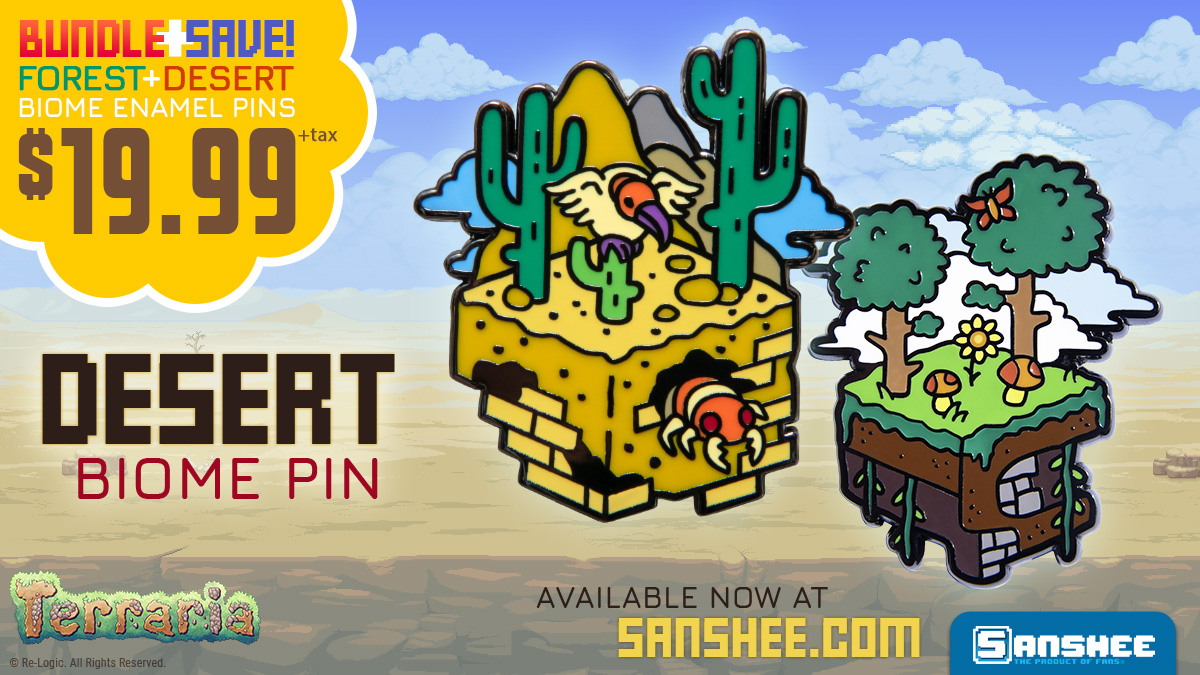 The Terraria Community is chock full of creative individuals - and this month, we wanted to highlight a handful of epic creators. Of course the Creation Compendium shows off a lot of amazing builds and other creative Terrarian expressions each month (if you haven't checked the CC out before, you really are missing out > CREATION COMPENDIUM ), but we wanted to take a few moments to show off some epic creations that were not posted within the Compendium. We wouldn't want everyone else to miss out on this awesomeness, after all!

If you have something really cool that you want to share with Terrarians everywhere, be sure to submit it to the Creation Compendium or tag us here or on Social Media so that we don't miss it! 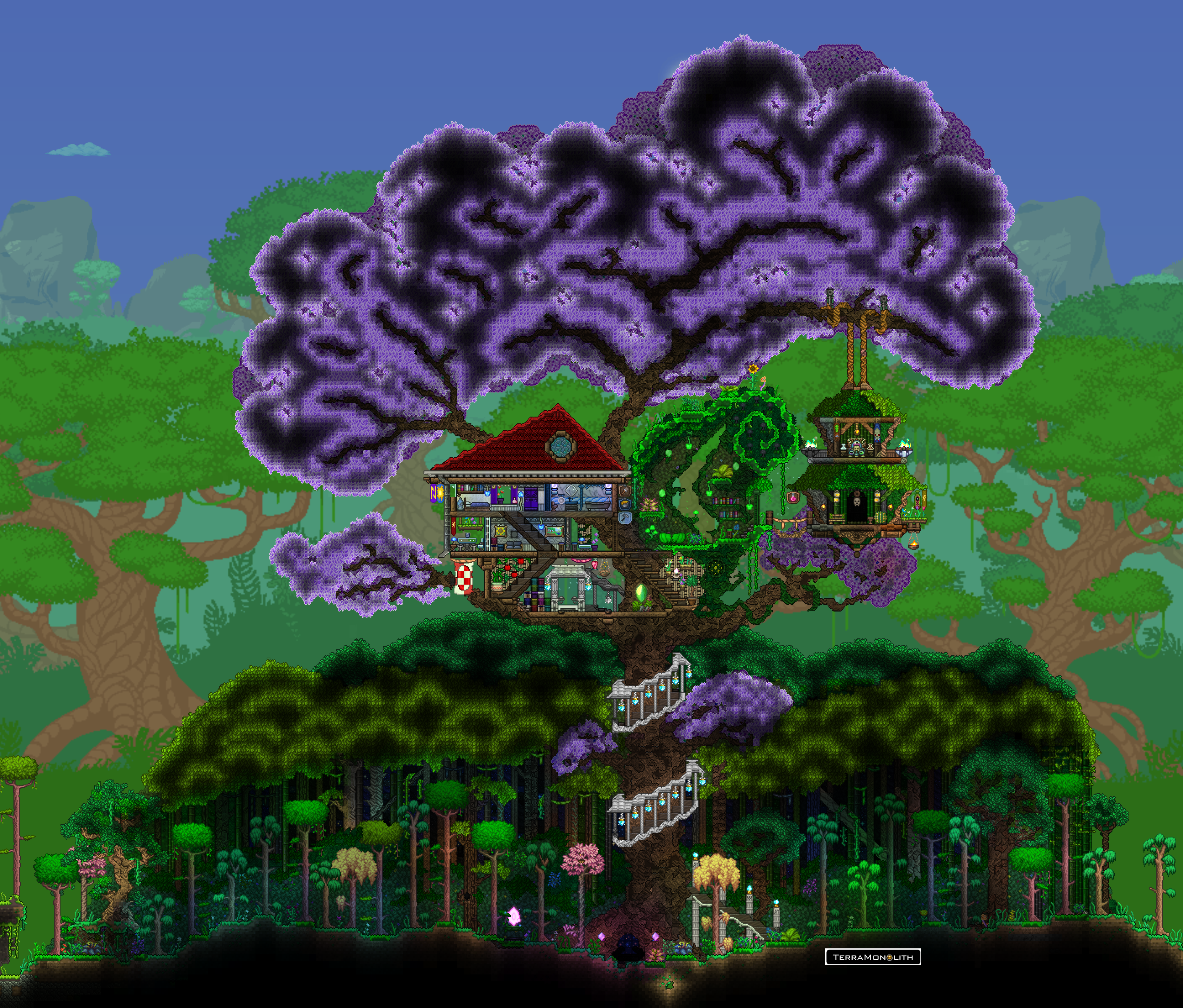 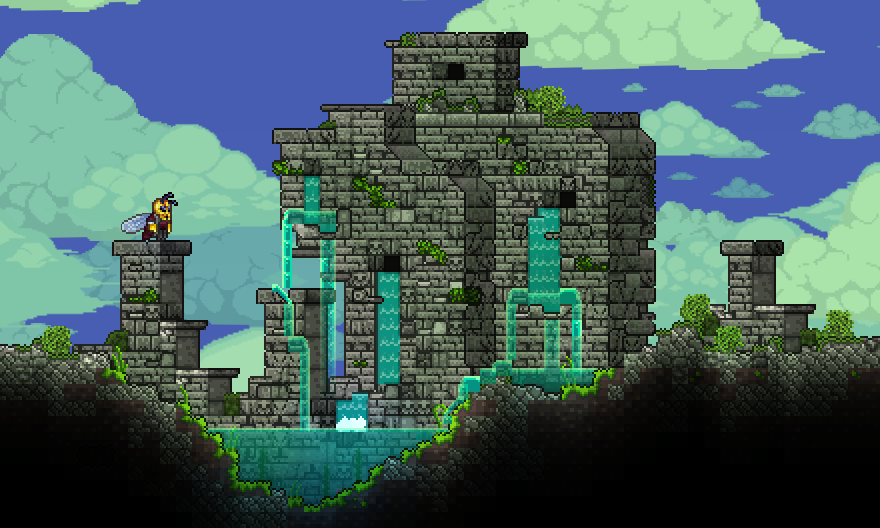 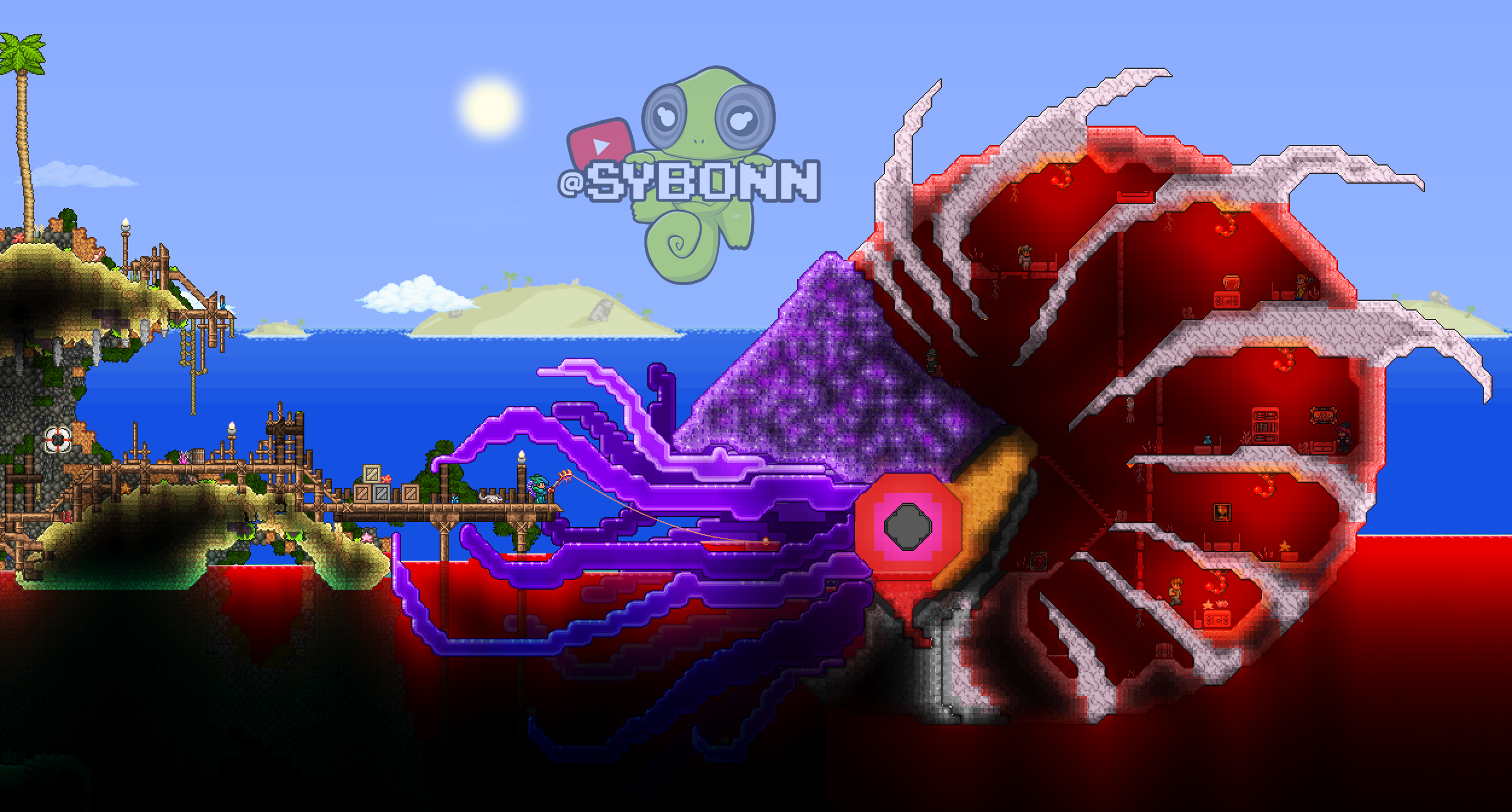 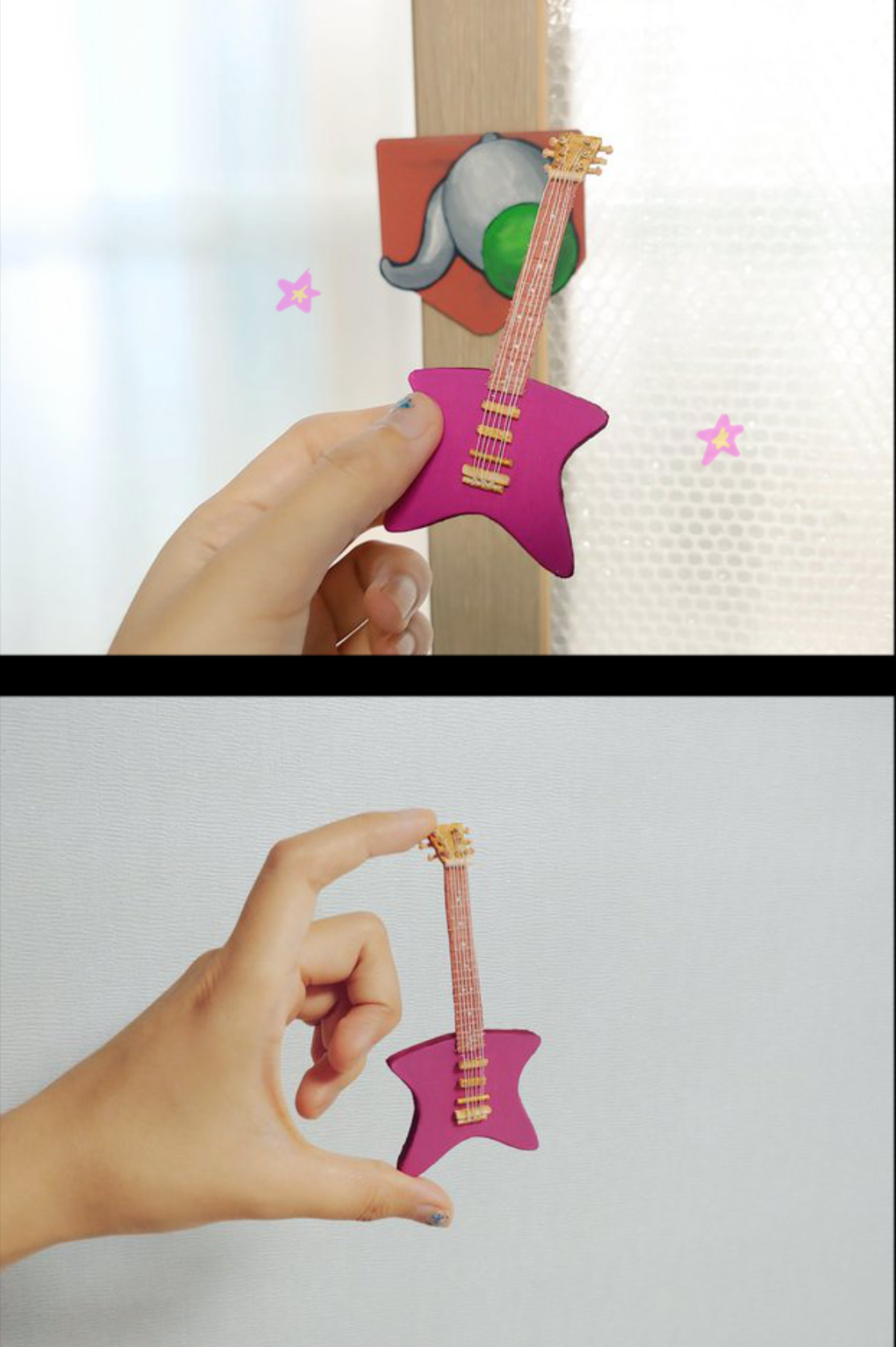 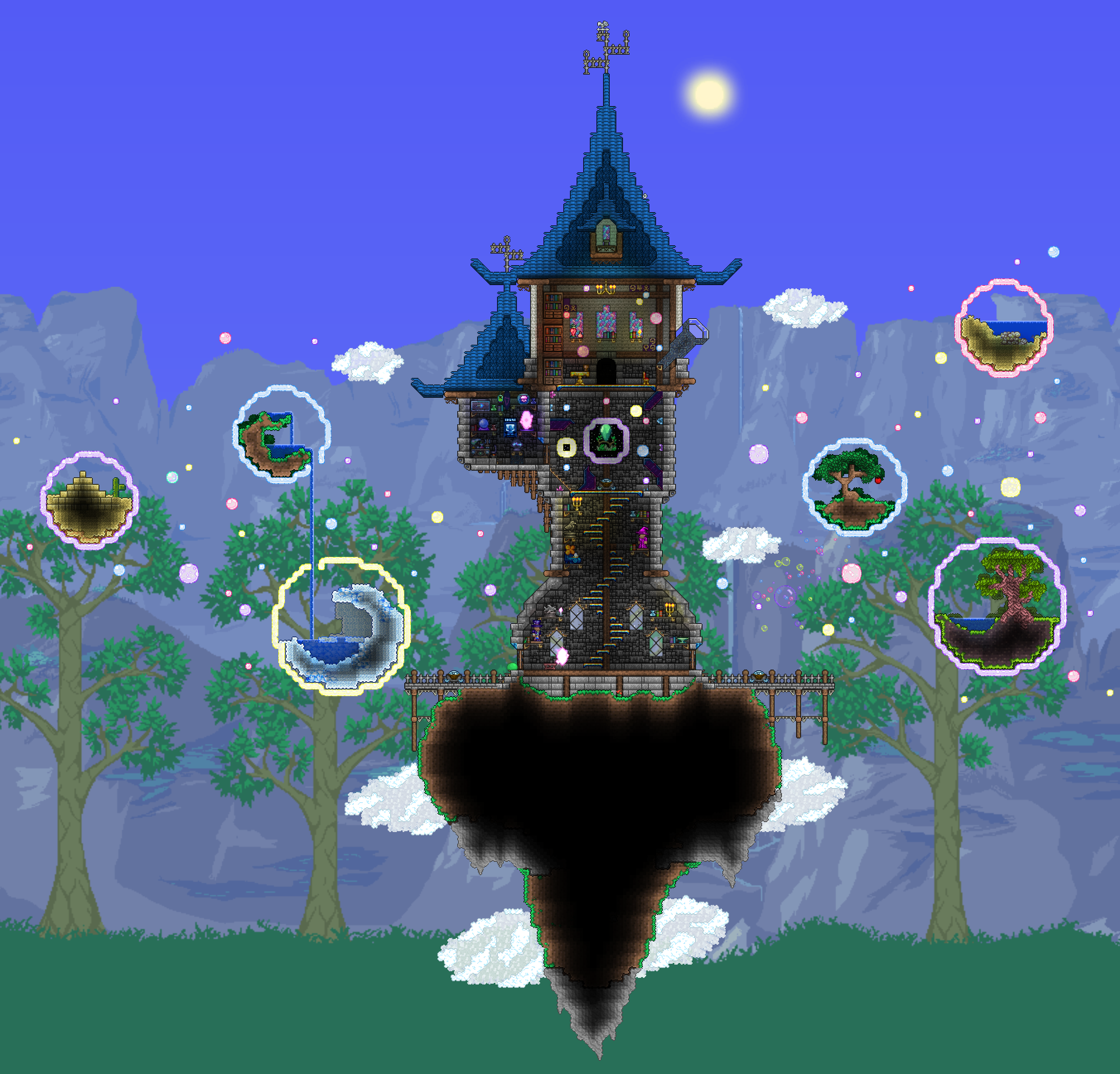 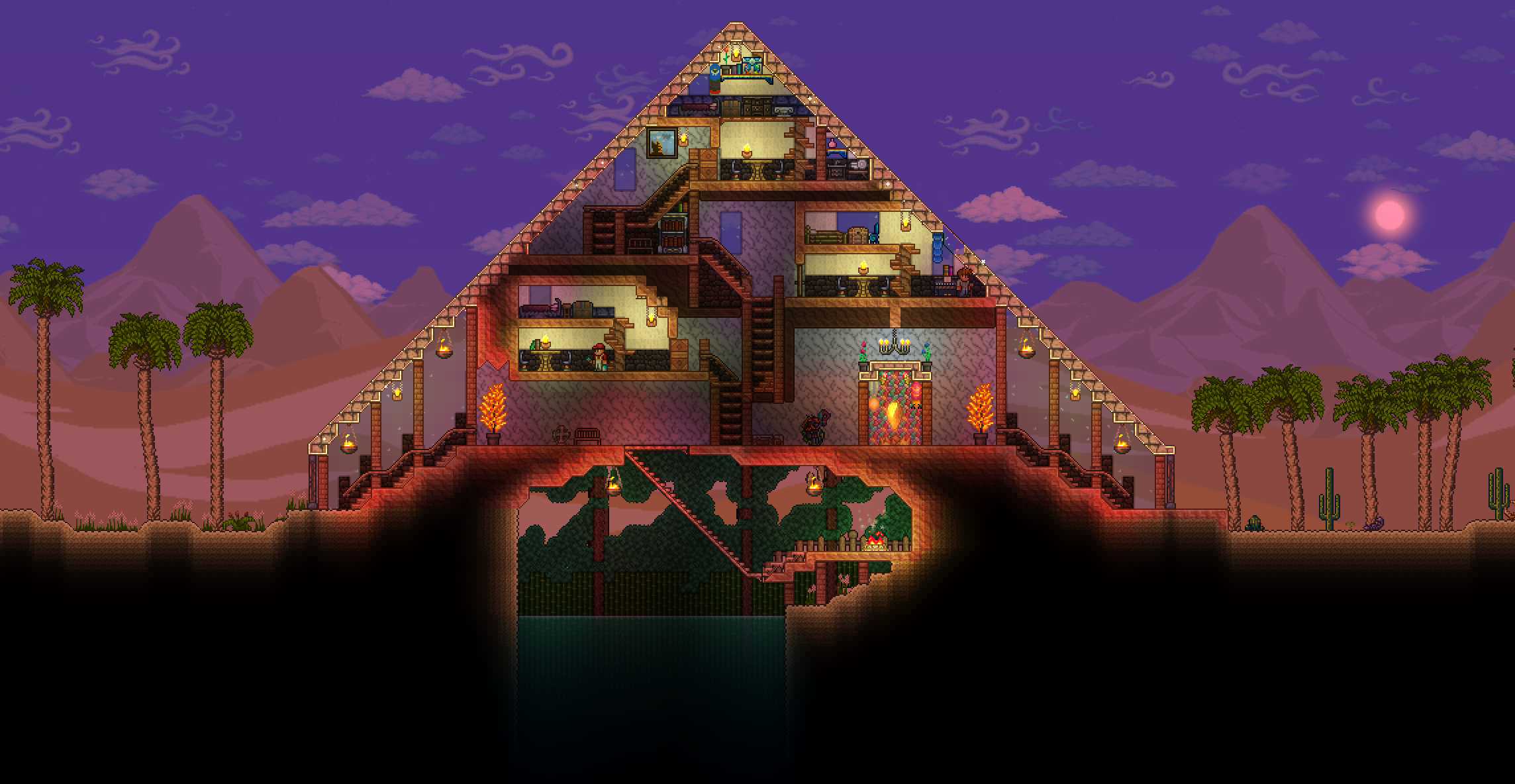 Great to see another state of the game post as always! 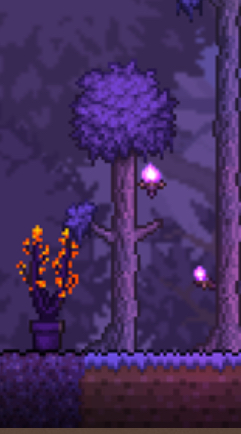 The torch is floating... Did they just spoil echo walls?

The console news makes me mega happy. Having the mobile version on console is huge. It's such a solid, almost exact port of the PC version.

I think there's a huge potential for crossplay too 👀
(I was able to do it with PC + Mobile back at mobile 1.3 launch by connecting both versions to the Mobile server, and running the PC version on a previous update. I dunno if what I did was illegal but it was a pretty eyebrow raising moment)

Can I ask why DR Studios took over console development if they're focusing more on mobile? Seems like console won't get the update until January (kinda like with 1.3). Shame mobile gets 1.4 before console. I know Mobile has more game sales, however console seems to be far more popular. I would say if Pipeworks had kept working on it, the update would've been out sooner, but it's impossible to tell now...

YESYESYES OCTOBER IS NOW BETTER
I always thought Autumn was the most boring season (spring = easter, summer = my bday, winter = xmas, autumn =... halloween...)
But now it is the best (for this year at least)
1.4.1 HYPEEE

The item frame is floating too

Absolutely cannot wait for 1.4.1, even if its not as big as journey's end. You better not release it on the 30th though.

Might just be sitting on top of an echo block.

Also feel free to release a "beta" branch on steam if you need help for bugs report , i'm pretty sure many of us (including me) will be happy to help the staff ^^

Pigman Δ said:
YESYESYES OCTOBER IS NOW BETTER
I always thought Autumn was the most boring season (spring = easter, summer = my bday, winter = xmas, autumn =... halloween...)
But now it is the best (for this year at least)
1.4.1 HYPEEE
Click to expand...

*sad skeleton noises as you throw halloween under the bus*

Good to see DR working as hard on console as they are on mobile, making good progress already. Hats off to them

Derpling Ω said:
The torch is floating... Did they just spoil echo walls?
Click to expand...

Oh that would be AWESOME. This is looking nice, and the soundtrack is gonna be GREAT, I'm sure.

Unit One said:
Might just be sitting on top of an echo block.

Pigman Δ said:
The item frame is floating too
Click to expand...