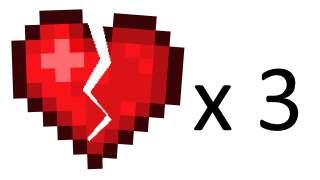 
These are two mods made for adding a deeper concept of mortality for the game. Lives adds a limit to the number of allowed deaths (until a 'hardcore' final death), and Injuries lets you attain permanent injuries (loss of maximum HP) from a small portion of damage received. Falling from high places and generally becoming low on health have additional effects, also.

Being injured produces 'Broken Hearts' that can be recovered within a time limit, and crafted into new Life Crystals or Cracked Life Crystals to restore lost health (see below).

New to Lives (v2.0.0): Settings now exist to implement "continues", with various configurable effects for running out of lives.

You may adjust mod settings in the respective configuration files found in 'Documents/My Games/Terraria/ModLoader/Mod Configs'.

Requires tModLoader (+0.11). Copy the above .tmod files from the above .zip files into your 'Documents/My Games/Terraria/ModLoader/Mods' folder to play.

Note for mod authors: Mods can freely adjust in-game config settings programmatically via. weak reference/API, but they are not automatically saved to file.

That's a nice idea! I won't personally use it because I'm not really a person who likes challenges like this, but it sounds like something people would enjoy

i checked for the config but i didn't see the lives one there and i only had 1 life and i died, can you help? other than that its a great mod

J The Gamer said:
i checked for the config but i didn't see the lives one there and i only had 1 life and i died, can you help? other than that its a great mod
Click to expand...

It appears the config file saves when the mod unloads. Try reloading all mods. I'll fix that shortly.

I'm interested, but also afraid. What's the full extent of the Injuries mod? I kind of want to enable it for my current playthrough, but I'm not sure if they will throw a lot of curveballs at me.

Actually, I still want more info on this, but I think I'm gonna man up and enable it.

That's the spirit! Also, here's the fixed versions (with a few minor tweaks to fall injuries):

Sounds cool but I'll wait for the ability to get more lives and recover lost hp.

No max HP recovery yet, but I did add craftable 1-ups (Life Crystal + Guide Voodoo Doll):

thanks for fixing it!

I haven't enabled this mod yet but do you think using Life Crystals to recover your lost hp would be good for single player at least? There are lots of Life Crystals. Lets say you have 87 max health because of injuries; you use 1 Life Crystal to make it 88 or 90 or 95 or 97.Then when it is close enough to your vanilla max health value (lets say it is beginning of game and 100hp), you use another one to complete to 100, then Life Crystal functions as normal like vanilla and your max life becomes 120hp then 140hp... Until you get injured again and Life Crystals start to recover lost max HPs. I am thinking you would get injured lot of times and some other mods may also use Life Crystals for recipes, so this would give player a challenge to choose between max health and that recipe. Also number and placement of Life Crystals on a world creates a challenge. And that makes player dig/discover more areas on a world which he wouldn't need to normally.

Life Crystals do recover health. They're the only way to do so, until you can get Life Fruits.

Edit: New version to expose classes for DLL use. No gameplay changes.

My suggestions for the mods!
Isn't the 1-up craftable a little too easy to craft? And where does one craft it? In my opinion they should be crafted in Demon/Crimson Altars only.
Also no idea how difficult this is to apply: But I think the 1-up should be find-able in other sources too. It's a long way to Hell at early game. Maybe getting them from Gold Chests/Fishing Crates/Rare pot drop too? Or a rare boss drop would work too.

The injury mod is perfect tho. It makes Life Crystals finally useful. You know, after you get full life they become trashable junk. But now I need to constantly keep them around. And this makes me explore ALL of the world. This is one of the best mods I have seen and I wish everyone would give it a go at least once.

One thing to consider is weighing crafting of 1-Ups vs. use for healing (if both mods enabled), since they're both dependent on Life Crystals (until you can get stocked up on Life Fruits, maybe). Other than that, I could add a configuration for a 'hard' crafting recipe for 1-Ups. Added pink gel? Dungeon keys? Strange Plants? 10 gold coins? Large gems? Large amber gems? Angel Statues?
Last edited: Dec 19, 2016

hamstar said:
One thing to consider is weighing crafting of 1-Ups vs. use for healing (if both mods enabled), since they're both dependent on Life Crystals (until you can get stocked up on Life Fruits, maybe). Other than that, I could add a configuration for a 'hard' crafting recipe for 1-Ups. Added pink gel? Dungeon keys? Strange Plants? 10 gold coins? Large gems? Large amber gems? Angel Statues?
Click to expand...

Extra lives should be something extremely rare tho. I think they should instead be a hard-to-get item from chests/pots/crates/expert bags.
If you craft them, they should need something like 10 life crystals and/or 1-3 lifefruits or so.

Hey! I thought on something neat that might be on your alley!

What about a "disease/illness" mod?

"Ill" is an special, permanent debuff that could cause the following:
"Slows down the player horizontal speed (Half the effect of Chilled), causes the player's Physical abilities to decrease (Like Weak) and reduces total Magic Damage by 25% (Akin to how Mana Sickness reduction's work)."

The only way to remove is by talking to the nurse and be treated, since it's a debuff. (Maybe you could make an expensive "medicine" item that could remove it, or a cheap "bandage" item that COULD remove it)
It lingers even if the player dies.


How could you get ill? By many means

What do you think of this mod idea? It would make the nurse needed and useful. But it might need a little bit of coding... And I have no idea how difficulty would that be to apply.

So, after playing a while I have noticed I barely get injuries anymore.
Is the formula far too forgiving now or what? Back then I would get wounds all the time.


Also... Could there be a way to make the nurse remove some "injury buildup"? It seems weird that injury buildup heals so quickly. I literally do not get any injury any more, and this is odd. It's also weird that a NURSE cannot heal injuries.

Lives 1.4.4-5: Fixed a major bug with saving (sorry, player data saving code was giving me all sorts of confusions)