<F for the fallen images from TO>
Infernal Dragon
* Rare
* Wyvern Behavior
Other possible names: Fell Dragon, Fell Drake, Infernal Drake, Hell Dragon, or Hell Drake.
Health: 5000
Damage: 85 (H) 50 (B)
Defense: 10 (H) 16 (B)
* Breathes a burst of fire (like a Flamethrower) when the player passes in front of its head.
Breath Damage: 30
Drops:

Dragonbone Blade - 3.33% (1/30)
A deadly upgraded version of the Bone Serpent. Not quite "mini-boss" tier, but fearsome nonetheless.
<F for the fallen images from TO>
Full body sprite example.

Wrath Scepter - 4% (1/25)
Rare underworld miniboss-like enemy. A Frost Golem for the Underworld, if you will.

Oblivion Staff - 4% (1/25)
Kind of like an upgraded Fire Imp, but not really. The game could use a few summoner enemies.


This one is from an amazing suggestion by Milt69466 to add more variety to Mimics. Go check it out!

Surtr's Sword - 33.3% (1/3)
Technically, this is post-Plantera but it still contributes to making Hardmode Hell less sucky, so I'm featuring it here.

<F for the fallen images from TO>
Broken Devil Wings
* Material.
* Used to craft Devil Wings.

Devil Wings
<F for the fallen images from TO>
* A souped-up version of the standard Demon Wings.
* Same tier as Flame Wings.
Recipe:
Broken Devil Wing

20 Souls of Flight
@ a Hardmode Anvil.

Surtur's Sword
* From Milt's aforementioned thread. Read it for more details.
* Broadsword-type Melee weapon.
*Releases damaging lava upon hitting an enemy.
Damage: 90
Knockback: 7
Use time: 25 (2.4 uses/second)
Before you go crying that it's OP, remember that it's a post-Plantera item.

Forsaken Relic (Sprite by Balduran! Thank you!)
* Accessory
Increases player Damage and Crits by 7% during invincibility.


These were ported over from another Hardmode Hell-related thread. (In fact, this is the thread where the idea started.)
http://forums.terraria.org/index.php?threads/phoenix-feather-hardmode-hell-revival-accessory.941/

<F for the fallen images from TO>
Underworld Key
* Rare drop from all Underworld enemies after defeating a Mechanical Boss.

Underworld Chest
* A unique Biome Chest can be found in the Dungeon.
* Unlocked with an Underworld Key.
* Contains a Phoenix Feather and random loot.

With all of this expansion, the post-Mech Underworld is going to need its own message. (Idea by Sir Cutswood.)

That's it for the suggestion. I hope you like the idea! Feel free to comment or criticize. Feedback is always appreciated.

Thanks go to zimberzimber for making this banner!​
Last edited: Feb 25, 2019

Edit: after all this time I finally noticed I wrote angle not angel wow how did I miss that?
Last edited: Jan 13, 2015

Dragrath said:
yay its here once again support only "problem" is the Fallen angle doesn't look impressive enough for its stats(looks like a common foe not miniboss)
Click to expand...

It's comcept art. You take what you can get. :/

It's not too bad, though. It gets the general idea across, even if it has less grandeur than one would hope.

I do believe that the suggestion is great , would give us some more things to do in the Underworld.

These sprites look even better on the new forum
And I still like the idea, hell sure is boring.
need a banner? *wink*

Chadwick said:
I know what I always say about more worm-type enemies in hell but holy crap that dragon
Click to expand...

Its a Wyvern, not a dragon

zimberzimber said:
Its a Wyvern, not a dragon
Click to expand... 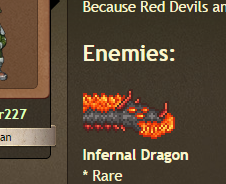 Plus, Wyverns and Dragons are easily mistaken in the Terraria universe.

Chadwick said:
Plus, Wyverns and Dragons are easily mistaken in the Terraria universe.
Click to expand...

Its a name, and Terraria has no dragons (sadly), only some weird hybrids with a pig.

Love any idea adding something more to end game to differentiate it from pre-hm/early hm. You have my support!

I have never seen anything this incredible. I really don't know what to say. I wish I could do sprites like that, I just don't have the patience...

Whatever, this idea is fantastic!!!

zimberzimber said:
Its a Wyvern, not a dragon
Click to expand...

Actually, it is not actually a Wyvern. Wyverns in Terraria are not in fact accurate. It they were:

I still support this. The new formatting is much better now; it's easy to see that the chest contains the phoenix feather.

SzGamer227 said:
Actually, it is not actually a Wyvern. Wyverns in Terraria are not in fact accurate. It they were:
View attachment 946
This is what they would look like.
Click to expand...

Again, its just a name....
I can call myself a Behemoth, does it make me look like this? It's not too bad, though. It gets the general idea across, even if it has less grandeur than one would hope.
Click to expand...

Um, the spoiler for the old sprite is broken. I think Spoilers here work differently than TO.

I like the idea, keep up the great work.