Terraria State of the Game: November 2019

Welcome to the the latest Terraria community update on development progress across all active platforms!


​
Greetings Terrarians - we hope you’re enjoying the 1.3.4 patch so far! In case you missed the details of that launch, feel free to check out the Console 1.3.4 Launch Thread here> Terraria 1.3.4 for Xbox One and PlayStation 4 Available Now!


Since that time, we have been gathering bugs and issues from 1.3.4 from both internal testers and the community. Thanks so much for sending those in! We wanted to let you know that we’re working on getting a hotfix released that should deal with some problems folks have been having - such as when that elusive Tavernkeep refuses to respawn in a timely fashion!

We’re also still working on the Japanese release for PS4, and looking forward to a big patch for fans in Japan!

​
We have some fresh news for you on Switch –

Sorry it’s taken a bit longer than we had wanted to get 1.3.1 out to you, but it’s for a good reason. Re-Logic has taken a look at our 1.3.1.1 build and provided some great feedback – so we’re taking another pass at the UI for the Grand Design to make it more touch friendly, as well as some other points of feedback that are needed to get things feeling just right.

We’re working on fixing those issues up as we speak, and then it should be a QA pass and submission between you and 1.3.1 on Switch! Stay tuned for additional information on exact timing.


In the meantime, here is a quick WIP preview of the spacing we did on the Grand Design’s interactables in the inventory in order to make touch feel like it should for these features:


​
Hello Terrarians, we hope you’re having a wonderful time as we head full-on into the holiday season!

After our cycle of hotfixes we’ve started working hard on controller support and UI customisation and while we’re still in the early stages we’ve come to the point you are able to navigate the game UI and can play comfortably with the controller. That said, there's still a lot of work to be done as we’re looking to ensure playing on controller and touch feels natural and intuitive, meaning our focus is currently on ensuring the UI and controller/touch play nice together.

We figure that if a picture is worth a thousand words, then maybe this video will help keep you all satisfied until we have more to show.

In terms of additional customisation we’re still exploring our options as we delve into the controller support so expect to hear more in the future as we want to ensure we cover as many options as we can and that the options provided improve your experience both on touch and controller!

We have some news to share this month that may be disappointing to some, but we hope that the explanation and rationale will make sense - we have made the tough call to push the Journey's End release date into 2020. We know that some folks have been surmising that this might be the case for a bit now, but we wanted to see what we could get done/check our progress vs our goals and be totally certain that 2019 wasn't going to be feasible before making the call and letting everyone know.

In the end, it comes down to a hard choice: scrap a bunch of the cool stuff that we want to see in Journey's End and force this out for 2019 or go ahead and push it into 2020 and make sure that we don't cut corners or leave a ton of things on the cutting room floor to hit that deadline. Re-Logic has never been about cutting corners or leaving things short of our goals throughout the history of Terraria - and with Journey's End being the final update, that philosophy needs to be underscored even further as we do not necessarily have a 1.4.X update coming "to pick up content that we didn't have time to finish".

We are totally aware that this unfortunate delay will be taken poorly by some, but we are fully confident that the final product will be well worth the wait. It just doesn't feel right to short-change our loyal community of fans and fail to fully deliver the Journey's End update that we have in mind. So, we hope you will understand, and we will try to answer questions in this thread as we can. We know it has been a long time coming, and we are thankful for your continued patience, passion, and support while we keep at the hard work of making Journey's End an update that is truly worthy of being the finishing touch to Terraria!

​
Terrarians we have an awesome announcement to share with all of you. For the first time ever, we are releasing a series of official collectible Terraria pins to the community! Each set will only have 100 metal pins total. There is a series number on each pin. We are starting with the Terra Blade, Meowmere, and Megashark.

We will not be selling these pins, but instead we will only be giving them out to the community via very special events, rare giveaways, and our prize shop located on the official Terraria Discord server at Join the Terraria Discord Server!.

Each day in our official Terraria prize shop we will display 3 randomly chosen pins. Displayed pins will also show the corresponding series number in the collection. Series numbers closer to #1 will have a higher Prize Point cost. The pins are now live in the prize shop! 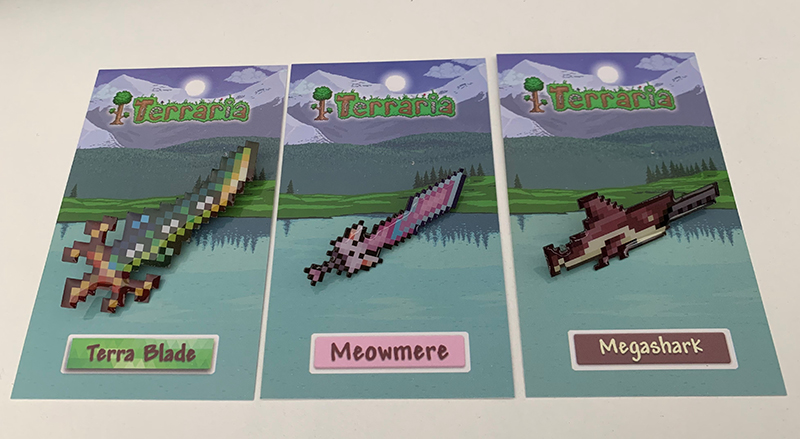 TERRARIA HOLIDAY BUILDING CONTEST​
The holiday season is upon us and we are celebrating by hosting a holiday build contest for a chance to win some of these ultra-rare Terraria collectibles. From December 15 until December 31 a seasonal Christmas game event will occur in Terraria. During this seasonal event Presents can be dropped by any enemy (1/13 or 7.7% chance), except for enemies spawned by statues. Hearts are also replaced by Candy Canes, and Mana Stars are replaced with Sugar Plums.

In Hardmode, one of the items a Present can contain is the Snow Globe, which summons the Frost Legion. Defeating it enables the Santa Claus NPC, which spawns if valid housing is available, but only during the Christmas season.


Using these holiday seasonal event items create an epic holiday themed Terraria build and share it with us on the official Terraria Discord server at Discord.gg/Terraria - please submit your build via the Submission Bot. The event submission period is December 15 until January 5. We will review the entries and announce the winners on social media.


Rules:
• It must be your own original work.
• No NSFW submissions.
• You must submit an image.
• The build should be new without previously being posted online


Prizes:
The top 3 builds will win either a custom Terra Blade, Meowmere, or Megashark collectible. Remember that the only way to obtain these collectibles is through very special events, rare giveaways, and our prize shop located on the official Terraria Discord server at Join the Terraria Discord Server!.

Ah well. I suppose there's good reasons behind it.

Not mad or anything, it just feels like it's been such a long time. But, it's good to make sure it's all well and ready first.

A polished update is always better than a rushed one. Considering the amount of new features, items, mobs, etc. I find it worth waiting another few months. Keep up the good work!

Staff member
Moderator
As we got ever closer to the end of this year I suspected this was coming - as with past updates ReLogic has proven that they work best given plenty of time - they're always worth the wait!

The controller with mobile looks super smooth too, will be nice to see that live.

Memes aside, I'd rather have more content and an almost bugless update, than a rushed, disappointing update w/tons of bugs; and I don't think I'm alone with this, pretty much everyone can understand this.

Also those pins look fantastic! I want some of them ;;

Nice.
But when local multiplayer for Switch though ?

Staff member
Moderator
It is not fun when a game or game update gets delayed. But ultimately it will be for the best. We will want to see more of the incredible stuff that is in store for us. Re-Logic has proven many times in the past that they consistently bring out high quality updates with each major update, so I'm not worried.

The delay means the update can become more amazing and the end product will be well worth the wait!
C

Aww man. I was betting there would be a release date this month. It's good to know that there will be more features. Thanks for all the hard work!

PC version taking the time to add in even more goodness? I'll wait for that, sure.

Disappointed, but not surprised. Y'all were runnin out of '2019' to work in.

Its also too bad you can't give another window of expectation for release, but I understand why you can't after 'this'. I would have at least liked a small-to-moderately sized spoiler in addition to this bad news to take some of sting out of the delivery, but its w/e at this point. Good thing Stardew's 1.4 update drops Tuesday at least; I'll have something to tide me over until whenever Journey's End ever drops.

sigh, I thought my waiting would finally be over...

Don't worry, take all the time the equipe need.
We will wait patiently for the final product with all the cool stuff!

Thanks for all the hard work you guys are doing!

Well, i was waiting for this State Release with a lot of hype and now that i've read it the only thing i want to say is : Take all the time you need until you feel that the update is perfect.
I don't personally care about waiting 1,2,5 or 6 months, the only thing i want is that when i will update the game i will be breathless.
And i know you will make an awesome game like Terraria a perfect game with that update.

2020 still feels reasonable, 2019 would have been a huge treat but it's just that, sweets.
If it comes down to pushing it out by 2019 and cutting content or pushing it back to 2020, then there is a clearly obvious answer. It's the last major update, cutting content it counter intuitive!

OK i will wait, but could you say, if it will release in the middle of the year of 2020? or next it?

I'm just curious. From back in ye olden days when 1.3.6? was announced until rumor was that it was 1.4 instead until now, I have always been curious as to when this, the greatest Terraria update ever, would occur.

Also because I haven't played in a while and am considering if I should just do a modded play-through while I wait. (although Stardew Valley and Minecraft updates this month and next month might actually keep me busy at least for a little while if I don't do modded Terraria)

Loki said:
we have made the tough call to push the Journey's End release date into 2020.​
Click to expand...

​
Aw man, they delayed the release. I’m fine with that, at least it’s for the better!
N

"Disappointed but not surprised" as someone else said. That's where I'm at as well, I guess. Hope all the devs have a good holiday season & I'll get back to lurking more next year!