The Lore of Terraria: Insanity 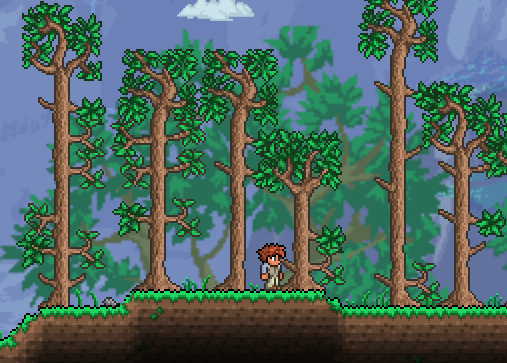 Our nice little player in a nice happy world with nice happy trees and nice happy whatevers. Everything's normal so far, only thing that's even remotely threatening are the slimes, which is comparable to being threatened by a herd of 2 week old puppies.

Okay, so we cut down a few trees, make a nice happy little house, and oh look it's nighttime and there are ZOMBIES and FLYING EYEBALLS outside.

Okay then, looks like our land is cursed. Cool, cool.


Okay you know what I'm not doing this. Fast forward it to crimson/corruption.

What a nice, welcoming place.

Right. So tra la la, let's go explore the biomes of unlimited evil and hey look at this very suspicious looking eye, and

Okay, something is seriously wrong here. THAT IS NOT NORMAL. Lay off the damn mushrooms, Jim.

A) You gain access to basic Demonite/Crimtane stuff and use it to make weapons out of evil and flesh.
B) You either kill a giant worm or brain and use it's flesh to make more complicated stuff out of evil and flesh.
C) You kill a giant bee (okay this one is kind of plausible, maybe evolution went overboard.)
D) You kill a giant freaking skull with hands that somehow bleed to gain access to a dungeon full of undead stuff.
E) You forge a sword at a demon altar.

... Yeah, that does sound a little insane. So let me explain (that rhymes)

When you first spawn in, everything's pretty much normal, right? Bunnies and sunshine and all that. But as the days and nights pass, you start slowly descending into insanity. Everything's worse when darkness falls... which tends to be true of madness. And you know that first boss you fight? The Eye of Cthulhu. The GOD OF INSANITY. To look upon Cthulhu is to go insane.

So why don't you go insane immediately? Because it's not his entire form. But it quickens the descent. In a very short time you're in over your head, fighting giant mythical beasts to gain power. Ever wonder why you're fighting?

Because the stuff you kill is a physical manifestation of your insanity. This is why you want to get more powerful. You're trying to escape.

But it consumes you. Hell, you sacrifice the Guide to advance your own power, the one person who has been actually (somewhat) helpful in this entire hellhole of a world. And that's not just a moral thing, it's symbolic: You've just given up the physical form of knowledge to fight a being of madness.


And it doesn't work. Sure, you think you've beaten it, but then SURPRISE now you've released two opposing spirits who'll corrupt your world!

So you head back up to the surface thinking you've won, after all the blood and sweat and training and sacrifice, only to find:

and more stuff that I can't be bothered to copy-paste. This is the kind of stuff you'd expect to see from a LSD trip.

Yeah, you're not even close to done.

Let's fast forward through all this. You fight mechanical reincarnations of stuff you killed before, you kill a giant PLANT (fine maybe evolution went overboard AGAIN), you commit genocide on a race of lizard-people attempting to protect what's sacred to them, then you kill their GOD. Then you kill a big fishdragonpig.

And every step is just another towards insanity. Each time you kill a boss, another one rises to take it's place. Each time, you collect more and more gear in the vain hope that if you just maybe kill Cthulhu you can escape.

You go through a lot, eventually taking on multiple bosses at once. And once you finally reign triumphant, and you're ready to take on your final challenge...

There's nothing. You're done. You've killed everything there is to kill, but you haven't healed your world. You've become a god in your own right, but you're still powerless. There is no release.

TL;DR: Screw you, I took a long time typing this go back and read it. You don't get a TLDR.