CraigDaGunslinger said:
Really? I didn´t know that. I thought it would get cast aside by players with the terra blade or meowmere or whatever.

P.S. I will do the generation thing maybe
Click to expand...

Death Sickle comes before both, of course it’s outclassed by them but you can also get it before either in a run.

Do I even need to explain?

Staff member
Moderator
I like the Clinger Staff and Crystal Vile Shard in particular a lot.

Haven't done a full mage playthrough since Journey's End came out so I am curious to feel how much it has improved with the buffs. Same with the Nettle Burst.

Also debatable on if the Frostbrand is considered a "bad weapon" but I consider it my signature sword for most of early hardmode and it does the job well against regular enemies even if it isn't as optimal at taking on mech bosses.

Ice Bow got a well needed buff with Journey's End so I don't think its considered a "bad weapon" anymore. Same can be said of a lot of weapons actually.

Slap Hand is hilariously fun to use, even if it’s useless on most cases.

Blood Rain Bow (I’m not sure if this is considered bad or not) is also a weapon I like a lot.

And my truest love of all, the Sharanga. Even though it’s not technically “bad”, I was heart broken when it was removed from the game and didn’t get a chance to be added back in.

Clinger Staff actually isn't bad anymore. It's now-infinite piercing makes it amazing for non-boss enemies. To the point that it almost feels too powerful against a lot of them.

BuffIing said:
Clinger Staff actually isn't bad anymore. It's now-infinite piercing makes it amazing for non-boss enemies. To the point that it almost feels too powerful against a lot of them.
Click to expand...

Heavily damages or holds back an entire half of the Old One’s Army too. Essential to the point that I recommend biting the farming in a crimson world to get it for the event. 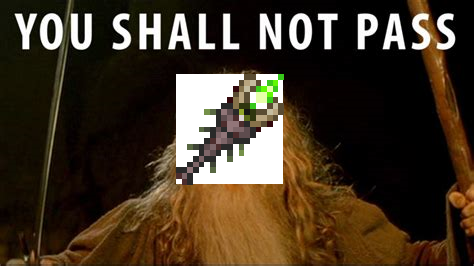 The Star Wrath has less crowd control then, say, the Meowmere, and worse single target damage than the Terrarian.
but like god damn you're raining stars and the looks better than the star fury and max attack speed mm yeeahhh

You probably don't even recognize that image.

It's the Classy Cane, dropped by the Tax Collector. It has insanely low stats for the stage it's available (Hardmode), but y'know, it's a cane and now I get to cane the hell out of those bats, I'm probably about to get trickstabbed but on the other hand, F R E E U B E R. You don't even have to kill them, just SHHIINNGGG RANDOM CRIT and look, 25% uber, nice.
M

For me, there are three that come to mind:

View attachment 307324Horseman’s Blade. It’s not practical to enter melee range to attack and the secondary hit is too far delayed from the primary, and even considerinf both of those its DPS is lower than things like the Terra Blade or North Pole. But by god if it isn’t satisfying to create a massive swarm of pumpkins by running through some weaker enemies in the Frost Moon or Martians.

View attachment 307322 Blood Thorn. It’s pretty hard to use, can’t target airborne enemies, and has pretty subpar DPS, but it’s definitely one of the coolest weapons in the game, and one of the most satisfying to look at and use.

View attachment 307323 Cool Whip. It’s probably the least practical whip in the game, with its only niche being The Destroyer for summoners, but it’s probably the most creative whip in the game, and it’s very fun to mow down - well, not mow down - but cut through crowds using the snowflake. Bonus points for the Frostburn effect making pretty colors.

So, what are your favorite useless or underpowered weapons?
Click to expand...