benkai3 said:
I love your attention on small details! I could not use sprites (furniture, decorations) the same way you do to make the rooms look pleasing to the eyes. Are you still open to requests? I have sent you a request so i don't clutter up your post space XD
Click to expand...

Sorry, but I'm actually not taking requests right now. I'm really busy between work and RL stuff, and my free time is spent either working on a mod or my adventure map. Once the adventure map is complete (no ETA as of yet), I will be re-opening requests, however. ^.^

dude, your builds are awesome, i suck at designing stuff so i tend to use other peoples ideas and butcher them for my needs. is it possible for you to make the jungle house from STW available to download?

Jaster Rogue said:
dude, your builds are awesome, i suck at designing stuff so i tend to use other peoples ideas and butcher them for my needs. is it possible for you to make the jungle house from STW available to download?
Click to expand...

Haha, thank you ^.^ Glad you like them.
As for making the build available for download, it was decided quite some time ago that I wouldn't be offering alternative downloads for anything I contribute to the mod. That being said, the area that the jungle house is going into is getting very close to being ready to release. We are expecting to make the area available this Friday. ^.^

Might I ask what block you're using for the walls on the fortress?

Hellmage Aurum said:
Might I ask what block you're using for the walls on the fortress?
Click to expand...

They are made of a mixture of palladium column and ebonstone brick painted gray. ^.^

Khaios said:
They are made of a mixture of palladium column and ebonstone brick painted gray. ^.^

Oh. Thanks. Are you going to be making anymore YouTube videos?

Hellmage Aurum said:
Oh. Thanks. Are you going to be making anymore YouTube videos?
Click to expand...

Well, it's something I've been considering. I'm not the best public speaker, and I have no video editing experience. I feel the best answer I can give is a solid "maybe." ^.^

Khaios said:
Well, it's something I've been considering. I'm not the best public speaker, and I have no video editing experience. I feel the best answer I can give is a solid "maybe." ^.^
Click to expand...

Oh. I really hope you are. I would love to see some speed builds and such

ing bathtub.... oh my god, i never would have guessed that you used an ebonwood bathtub for that

I want to congratulate you for your constrrucciones, are excellent addition to beautiful, but I write this post more than anything to thank him for his generosity, putting the maps available to users so that we download.

I wanted to tell, that the Tedit I copy your buildings are so beautiful and I'm using to create my little virtual world, but I want you to know that not just copy and paste, destroy your buildings to know q materials you use and try to recreate them again , so I'm learning but I will never be as good as you, jajjajaj.

Thank you! I'm glad that you enjoy my builds! I'm always happy to hear when people download and use them ^.^ I also really enjoy people that tear them down to learn what I used. I spend a lot of time trying to learn what mats people use in their builds, so I makes me happy when I learn others do that to mine ;D

Oh, and don't worry about Google Translate ^.^ I use it too, when people write something to me that isn't in English, hehe.

Wow i love your builds they are so good

Martinator said:
Wow i love your builds they are so good
Click to expand...

Thank you! It always feels good to know that people enjoy my hard work ^.^

I know I haven't posted anything in quite a while, but I wanted to let you know that I have in fact been hard at work! Some of you may or may not know I've been building my first adventure map. I'd love to post lots of screenshots as I complete sections of the map, but obviously that'd spoil a lot of the fun of exploring a new adventure. That said, I feel like sharing a couple of screenshots. One of them will be my entry to next month's CC.

The map is still very much WiP. I've been quite busy. Also, I may need to delay progress on it for a week or two so can work some more on STW. @Flippi and @CursedMoose caught up with me much faster than I expected (which is a good thing!), so I need to give them some more content to work with.

For now, enjoy a couple of spoilers for the map ^.^ 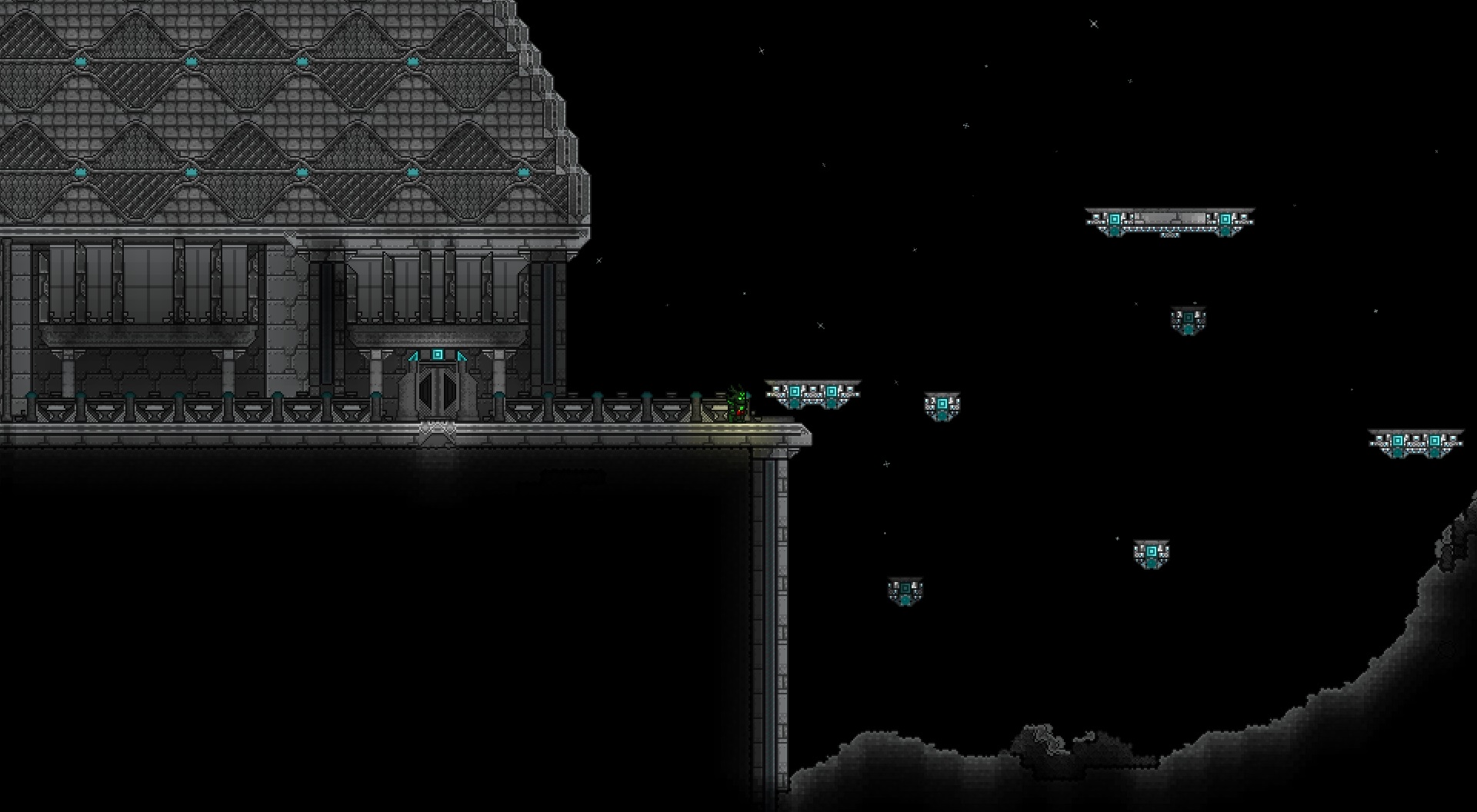 Hey everyone! Just wanted to share a few gif's of the "working" sections on the starship I posted the other day. ^.^

Khaios said:
Hey everyone! Just wanted to share a few gif's of the "working" sections on the starship I posted the other day. ^.^

that's beautiful, love the use of minecart tracks O_O

Khaios said:
Hey everyone! Just wanted to share a few gif's of the "working" sections on the starship I posted the other day. ^.^

Could you give us a rundown on how you accomplished some of this? I'm blown away, I have no clue how you did most of that.

Tyro said:
Could you give us a rundown on how you accomplished some of this? I'm blown away, I have no clue how you did most of that.
Click to expand...

Sure thing! I'd be happy to try and help.

I'll start with the easiest stuff.

The rotating "sensor" thing is just actuated blocks hooked up to a one second timer. As one side actuates, the other activates, so it gives the illusion that it's moving.
----------
The ship's guns are just a few portal stations hooked up to a one second timer. The timer feeds into a logic gate that has four inactive, one active, and a faulty logic lamp. That way, the gun won't fire every second, but it will fire fairly frequently, somewhat at random.
----------
The sliding doors are fairly simple. The blocks that act as the door are hooked up to actuators. Each block has a different wire color. You connect each of those wire colors to a separate teal pressure plate surrounded on either side by dart traps, evenly spaced. Between the dart traps and the first pressure plates is an actuated block, and an active block. When you press the input, both dart traps shoot. Since one side is blocked with an actively solid tile, only one dart can reach the pressure plates. As the dart travels from left to right (or right to left) it actuates/activates the sliding door's blocks in order, giving it a moving appearance. It also swaps which block is active in front of the dart traps, so that the next time you send an input signal, the pressure plates are triggered in the opposite direction. It might sound complicated, but it really isn't. Here's a screenshot that shows what the door's "engine" looks like, and directly below it is how the door would be wired up.

----------
The reactor is going to look complicated, just based on the screenshots, but I assure you it's mostly just clutter. The concept is very simple. Here is what the wiring at the reactor itself looks like. 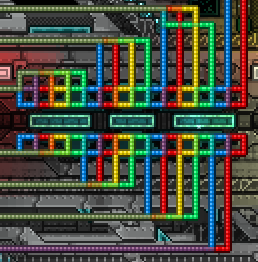 Basically, the reactor is made up of a bunch of inactive gemspark blocks. As wires activate them, they "separate" from the inactive blocks, and light up. The wires are arranged in a specific color pattern. Starting from one side, using one color, draw the shape that you want the moving light to be. In this example, I used a 2x2 square.

Here's another example of a reactor that I'm using with a different light shape (diagonal).

After you've drawn your pattern against the gemspark with one wire, move one tile to the side, then draw the exact same pattern with a different color wire. Repeat this process until all of the gemspark blocks are covered in your wire pattern, and make sure to always use the wires in the same order to make it easier to remember. For example, my reactor from left to right uses blue > red > yellow > green.

Next, you run all of this massive amount of wires (there are a TON of wires, so be extra careful not to cross any of them) to the following "engine." This is just a small segment of the engine (it's quite a bit longer, but it's all more of the same thing, so no need to show it all).

On the left side of the screenshot shows you what it looks like without wires, and the right shows you with wires. Basically, it's a simple pattern. A spear trap is activated by your initial input (in my case it's triggered by player sensor when they first arrive on the ship). That spear trap shoots a teal pressure plate which deactives the logic lamp behind it, activates the logic lamp in front of it, and activates the spear trap in front of it. This allows the signal to be passed in one direction.

When you are connecting your wires to this engine, you can choose which direction your reactor lights move. In my example, you can see that my wires are connected from bottom to top in the same order that I used on the gemspark blocks (blue, red, yellow, green). Because you don't want to cross any wire colors, you will have to change what colored wires you use for your input lines (connected to every teal pressure plate) every time you change your output lines (connected to the AND gates).

If you want one side of lights to move in the opposite direction, like mine do in this example, you will have to make sure that the bottom half of the reactor's wires are connected to AND gates in the opposite order of the top half.
I'm sorry if any of this is confusing. I tend to over-explain things. Stuff like this makes sense in my head, but it's hard to convert it into words, sometimes. If you need any help deciphering my explanation, feel free to ask, and I'll try my best to explain it better ^.^

Khaios said:
Sure thing! I'd be happy to try and help.
<explanation snipped>
Click to expand...

I don't understand all of it, but I grok enough that it gave me some ideas. Thanks!