PC Testing the maximum distance for a Portal Gun Station

Decided to do a little testing with the portal gun station regarding how far it can shoot.

I have my portal gun station set up here

I'm not sure whether Terraria uses the player's left half or right half for determining horizontal position, but I'm just going to be using relative coordinates so my measurements will be taken from my player's left half.

Here's where I have my target set up. 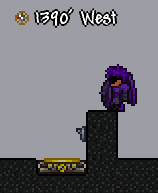 So the results are in, and it turns out a portal gun station can shoot a wall a maximum of 674* blocks away from the end of it's barrel!

*Thanks to @critcodedtuna for pointing out I needed to divide by two.
Last edited: Jun 19, 2016

Going from compass measurement to blocks, you need to divide by 2 since one block is 2 feet. 674 blocks is still nothing to sneeze at though.

critcodedtuna said:
Going from compass measurement to blocks, you need to divide by 2 since one block is 2 feet. 674 blocks is still nothing to sneeze at though.
Click to expand...

Thanks. Didn't know that.

Nice research there. Going by what the code says, I can confirm a maximum travel distance of 3600 updates * 3 pixels/update / 16 pixels/tile = 675 tiles. Since the projectile isn't created at the very front of the barrel, it can't traverse the final block though.