It’s not a big deal to most people.

It’s an extremely big deal to me.

That’s why I gravitate towards fandoms with either no fixed canon, or with flexible canon and/or open ends.

By making an official canon (after letting others assume there wouldn’t be for 8 years), it’s invalidated all the work I’ve done.

Maybe not to everyone, but it does to me and my personal code (which is very precious to me in a world where I’ve been on the receiving end of far more broken promises than kept ones), and I’m the one who wasted all those years.

Forgive me if the 6-year gaping hole in my heart hurts a little.

But in the end, I’m just one person who made the mistake of getting emotionally invested in someone else’s world despite all the screaming warnings not to.

Staff member
Moderator
Glad to see you here! Always a fan of your work!

Hey Daimera. Always loved your artwork. Glad you took the time to transfer it all to here.
*watches thread* 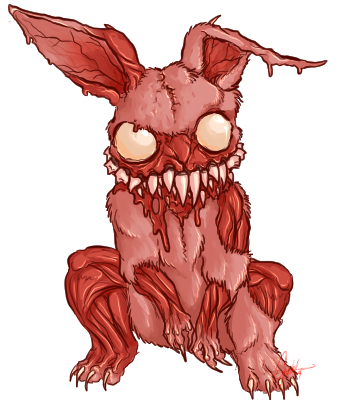 Holy mother of awesome! Now I really can't wait for 1.3

Wow, I don't even have the words to express how awesome, yet how equally gross that thing is!

GG
Im scared of Hopping back to my bed.
Hehe,get it? Hehe..hehe...hehe..bye

Mind if I turn some or these into in game pixel art?

I love how it has a lot of it muscles appearing

keep up the good work!

Jewsus said:
Mind if I turn some or these into in game pixel art?
Click to expand...

Oh, hey, sorry about not getting back on this quickly! I know I said "good morning" but since I'm in Hawaii I was actually going to bed. I just figured most people would be waking up because timezones!

Anyhow, go on ahead!

You have no idea how glad I am that the game's resolution doesn't allow for a level of detail like in your crimson drawings.

I love them, but at the same time they scare the crap out of me.

I am amazed, yet somehow terrified by your work ^^.

Re-Logic
http://i.imgur.com/G5TxaSy.jpg I really, really, love this one. As I said, your perception of the sprites are so damn amazing.

You really are a Artist! I want to draw like that.

Dai, all I can say is you're awesome.

That is all, thank you.