I found a really wierd seed. it seems that the top layer of the world has been stripped away and you spawn really near the underground. have a look see:
1241675129 (medium corruption expert)

One living tree with chest and water bolt in pre-Skeletron dungeon. The interesting part is that all three crimson chasms spawn extremely close to each other (you can see all three of the mouths on the same screen), so the tunnels and hearts spawn tangled up in each other. In my world, there was a demon altar inside the chasm(s) despite it being a crimson world.

It could be a nice world to play, since the crimson is wrapped around itself and there's no evil on the jungle side. 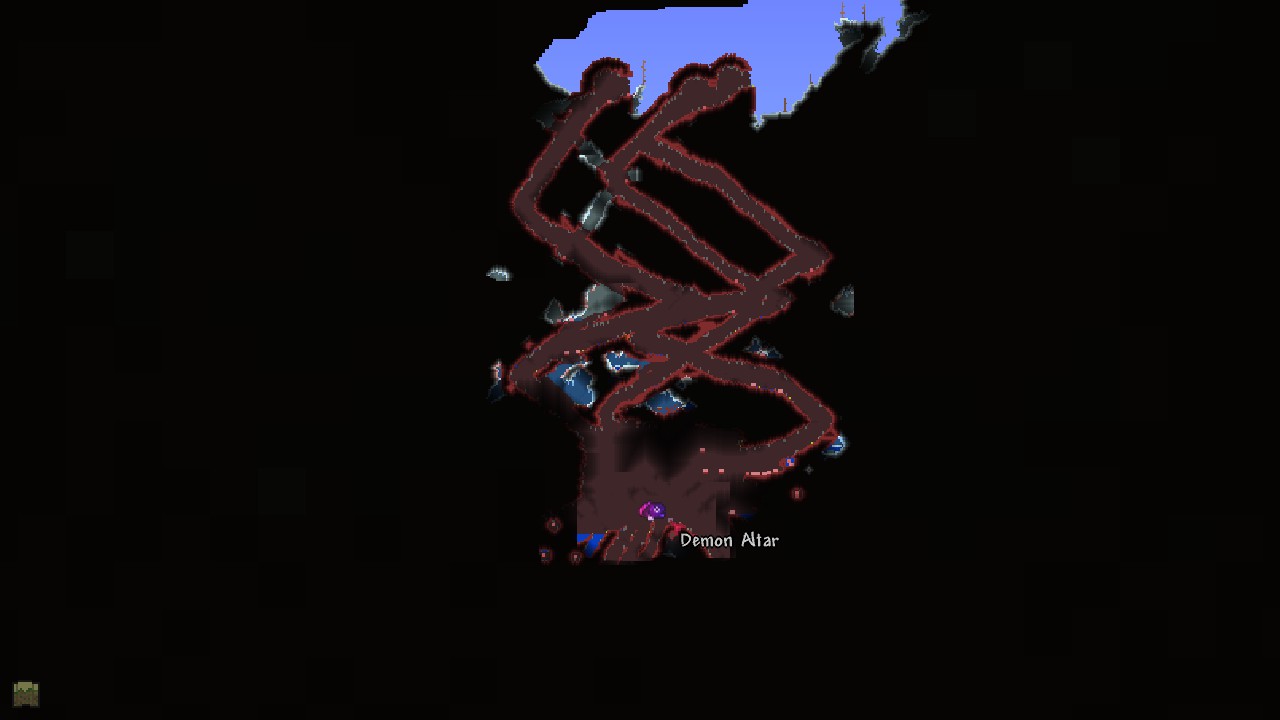 Two pyramids off to the left with a magic carpet and a desert in the bottle, one of the pyramids is intersected with a living tree and it's chest room too. Multiple enchanted swords. Jungle Temple barely touches the outside of the jungle. Crazy sunken beach on the right hand side between cliffs for the dungeon and ocean. Surface level wooden chest with golden key inside the dungeon entrance.
A

Notes: 6 sky islands, all on the left side of the map, including one almost practically above the spawn point; jungle on the left is hemmed in by corruption on both sides (there is a teeny jungle to the right of the first corruption zone); geniuine enchanced sword just beyond desert to the left; surface level water chest in the jungle; head all the way to the right for flippers and water walking boots. No pyramids, two living trees with no root system.

Head to the right into the snow biome and venture into the cave under the hill for snow biome exploration; alternatively head to the left to the cave just before the big lake - dig straight underneath the lake to find a gold chest with a magic mirror, just below a minecart track that will take you past decent amounts of ore, as well as houses with various statues, chests, and a couple of Extractinators.
A

This one has 3 shrines which can get you an Arkhalis or Enchanted Sword
I got an Arkhalis and 2 Enchanted sword when i used it
Seed: 700406077 (Medium, Corruption, Expert)

All made with tmod-loader version of Terraria. There might be some small differences to vanilla Terraria.

(if you looking for 5 pyramids at small world, or 6 in medium, they are in prior post )
Click to expand...

You generated at Windows? crimson and expert?
Sometimes worlds can be a little different for each user.
Also the world generation depends if even or odd worlds generated before. Furthermore also other worlds generated before can have an impact at worldgen (both world gen bugs).
For unbiased world gen restart the game and generate the world two times in a row. Those two versions should be the most stable among different users.

Also Flower Boots are a quite rare item. Many worlds don't have them.
I checked my version. It also has no flower boots

This seed has an unlocked dungeon chest in the entrance to the dungeon.
Seed: 2061922970
Size: Small
Evil: Corruption
Dungeon is to the right.

That's just a plain old wooden chest for me. There is a waterbolt above the dungeon door though. 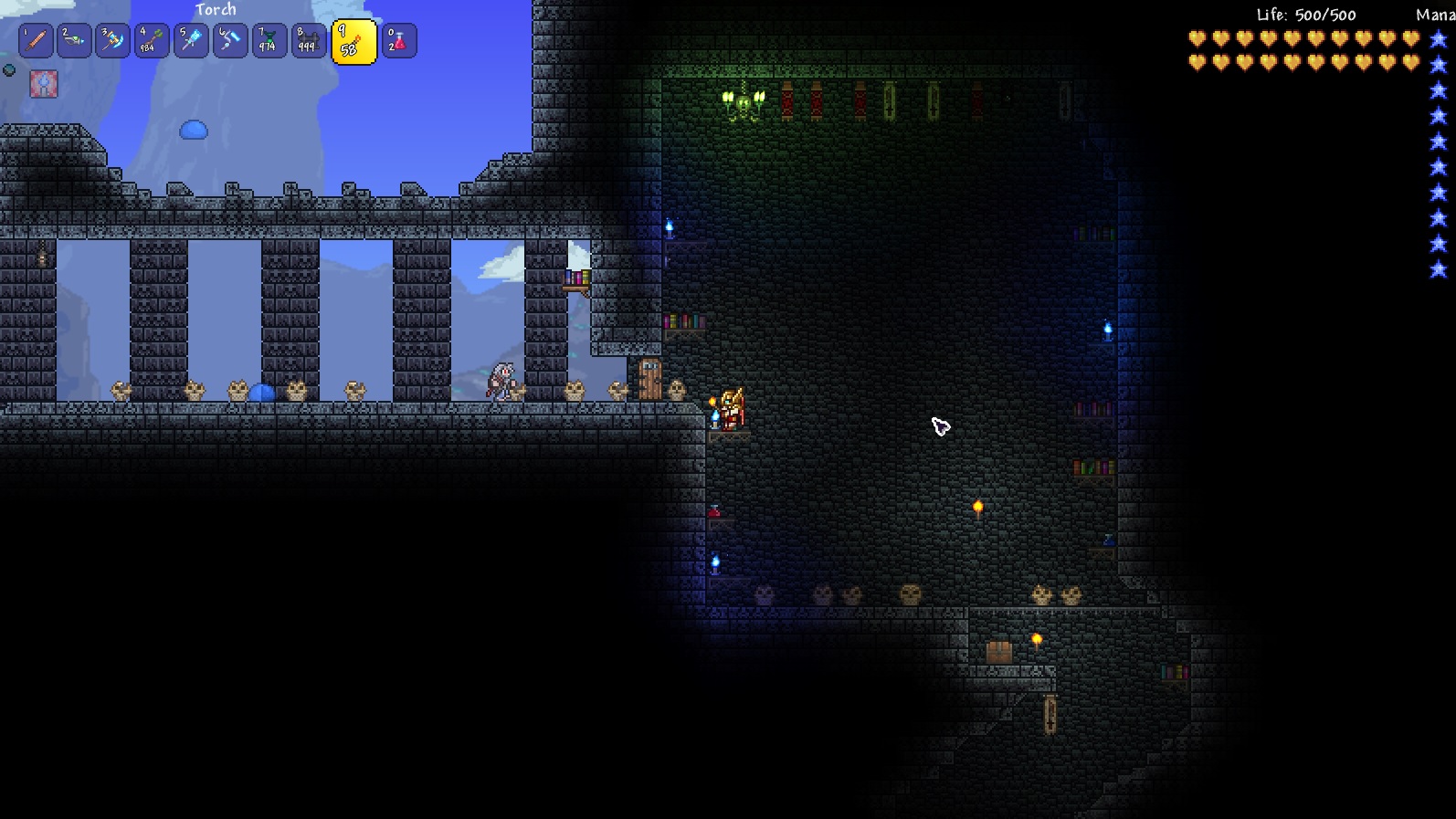 Underground house above ground and an underground desert house right at the entrance to the underground desert. Also has waterbolt in the dungeon and flying carpet in the pyramid.
Seed: 916992906
Size: Small
Evil: Corruption
Houses and pyramid to the left, dungeon to the right. 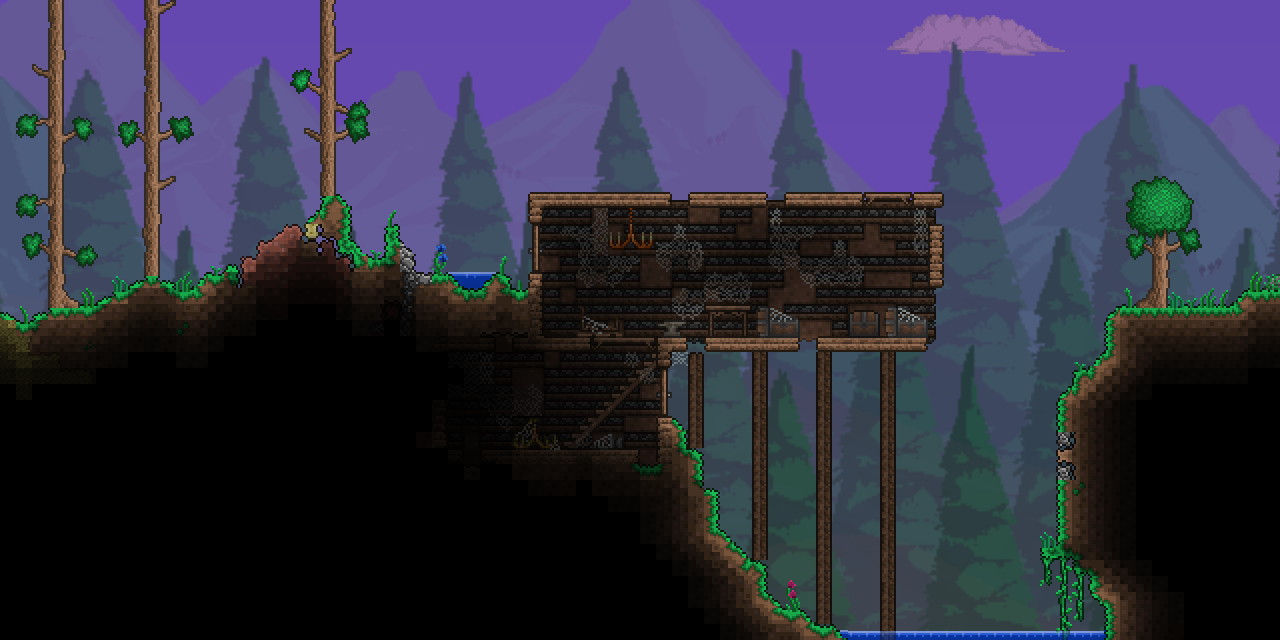 2950 west past a purple fortress that spawns a little weird, there are two deserts on either side of a tiny woodland. Easy to miss. Just under 2950 is the narrow tunnel that leads to the enchanted sword shrine. On the first try I got Arkhalis but I tested it a second time and only got the enchanted sword.

If you want Arkhalis, best to save scum it by building a house with a bed in the shrine. Ensure autosave is off and that you don't take the sword. Use Alt+F4 to exit quickly without saving if you don't get it right away.
Last edited: Dec 4, 2019
N

There is a Crimson cavern inside the Jungle just to the left of spawn and a snow biome just to the right. There are 4 Crimson caverns in the world, 5 living trees, 4 enchanted shrines, and tons of granite and marble biomes. The Dungeon drops halfway to hell turns west, goes down, then to the left, and down again just above hell. There are 3 granite cabins in the granite biome near said dungeon. The temple is at the bottom of the Jungle. The eastern ocean is up higher than most of the other surface.

One of the most insane seeds I've ever found:


+ 2 pyramids, one to the left past the snow with a Warding Flying Carpet, and one to the right past the corruption with a Sandstorm in a Bottle. The left pyramid leads to nothing, but the right pyramid leads to a small water-filled cave with a Heart Crystal and some ores.
+ Both pyramids have Floating Islands directly above them. The one to the right has a lake, and the one to the left has a proper island with a house containing a Shiny Red Balloon.
+ Dungeon has a surface room with a Wooden Chest containing a Golden Key, as well as a Water Bolt on the shelves (don't go past the room, as it's only a couple of blocks above 0 height).
+ First surface cave in the snow eventually leads to a room with Ice Skates.
+ Excellent fishing lake directly right of world spawn.
+ Plenty of ores in the caves I've explored.
= The three corruptions are in okay spots overall. The rightmost one corrupts the ocean, but the first one to the right is just before (but not touching) the jungle, and the left one is in a pretty good spot as well; both of those can easily be quarantined if you wish to do so.
- Other than the one below the right pyramid, I've found no Heart Crystals so far. This may change as there's a few caves I've yet to explore.
- Other than the Ice Skates one in the snow, I've found zero chests underground. This may change as there's a few caves I've yet to explore. 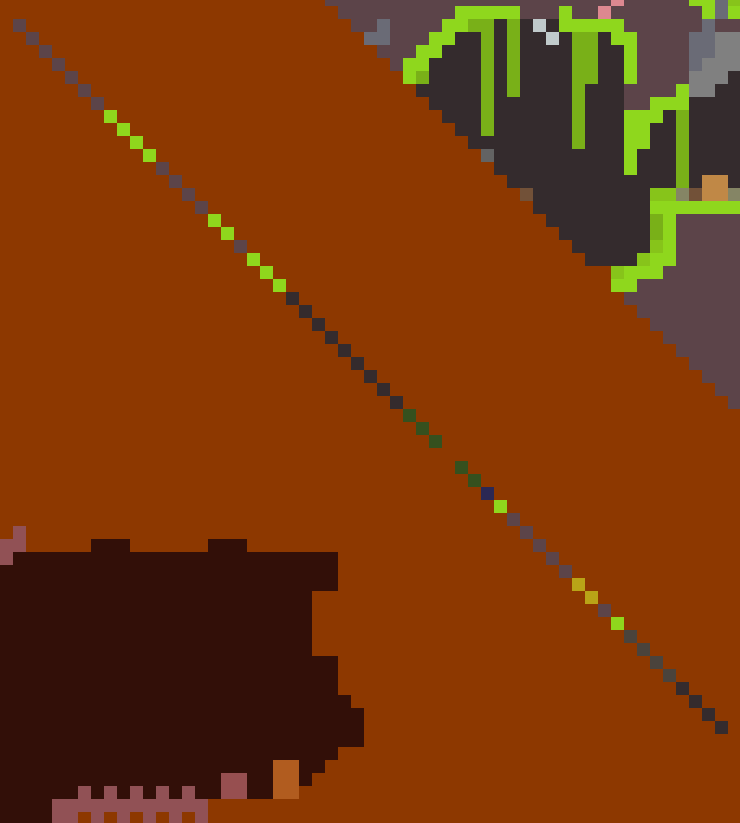 
The seed itself looks very broken and guess what? It generates a very broken world!
Let's start from the classic that i already show to you, it contains a spider nest in jungle: 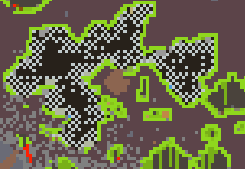 If you walk a few blocks, you can see also a bee hive.
This bee hive seems to be in a somewhat unusual shape: 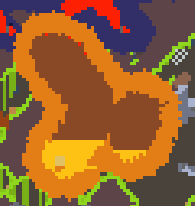 Sadly,the jungle won't last too long, since crimson is devouring it from one side 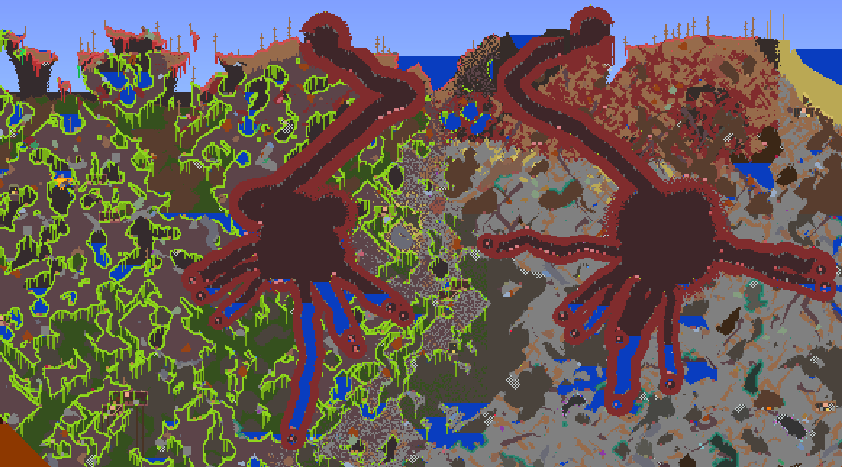 And mushroom biome from another side 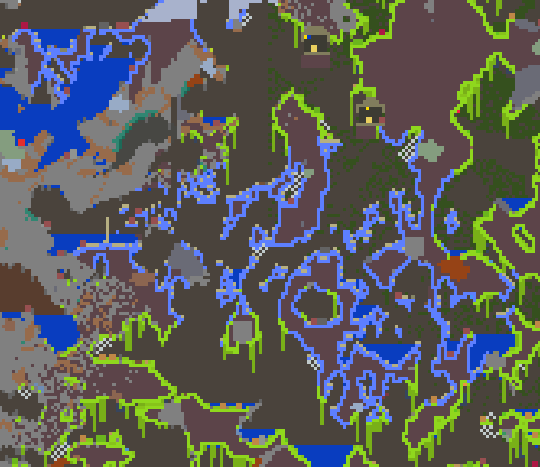 At least we can see the beautiful shadewood palms, they're beautiful, aren't they?
Well, speaking of jungle, it also has a temple. And temple contains a chest before the door!

Well, the chest contains nothing special, just a crafting station to allow you pre-hardmode lihzahrd furniture without suffering while making HOIK to work

There's also a living tree in this world. It's like, other trees aren't living, they're all dead, who came with this name for this structure? 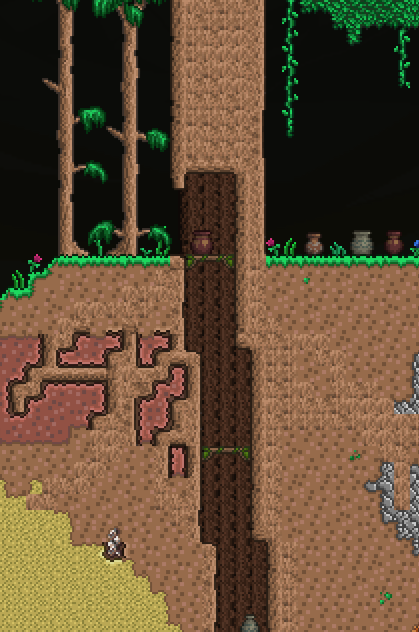 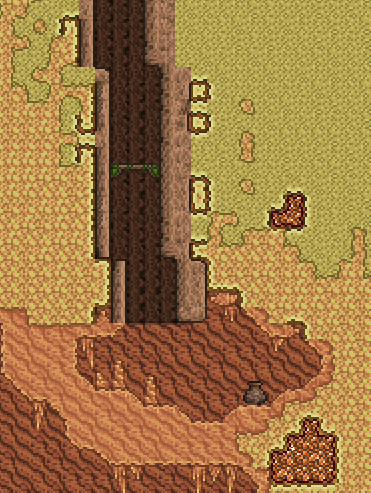 There's also a campfire, in middle of nowhere! 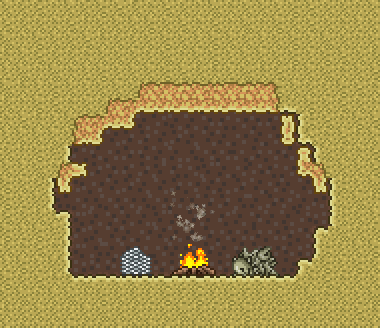 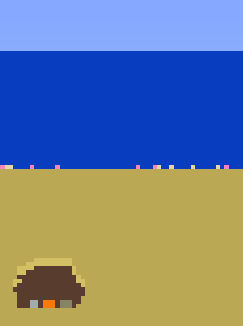 Seriously, this world has a lot of those rooms in middle of nowhere, like this marble pot. It isn't even surrounded by marble walls! 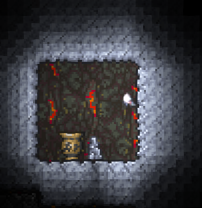 And the world gen decided to bury a treasure room in water, what an amazing seed! 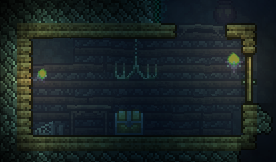 Now i decided to see what happens if i'll add some mods to this broken seed.
I decided to add Calamity Mod and adding it was a mistake...
Now the next images i show were taken from Calamity Mod.

So i decided to start with special structures and biomes this mod adds, now a treasure room blocks the path in the ice pyramid. It doesn't even have a door! 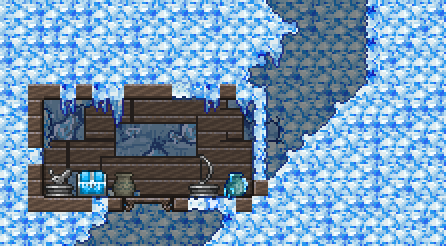 The sunken sea biome now borders the granite biome, the question is why there's also blocks of mushroom grass here?

There's also broken water generation in the sunken sea. I didn't break or add liquids, it's just the world is THAT broken. 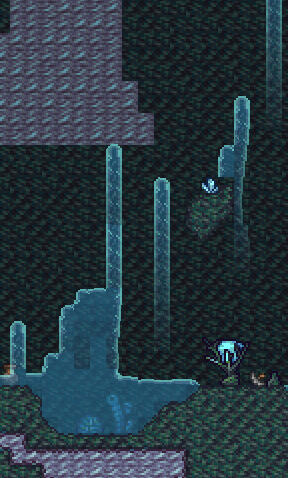 When i came here for the 2nd time, the water was flying like it's nothing. You can freely swim here and it wouldn't fall. What an amazing world generator. 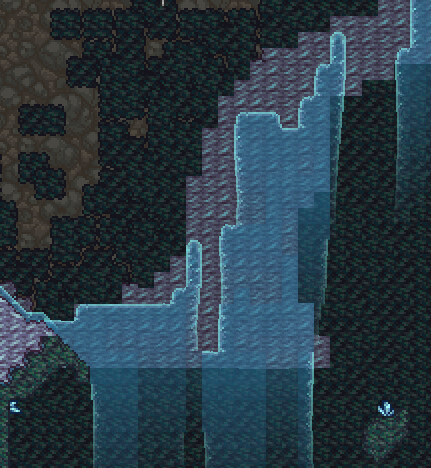 Calamity mod seems to also provide slight changes that aren't releated to the mod's exclusive content. Like the crimson chasms i show to you became 1 big chasm with 2 entraces, it also fixed the shape of the bee hive and made the spider biome be even deeper into the jungle biome.

You could have a very early solar eclipse with that seed. Or would you restart a different map cos you're such a cheat

1202555532, small world, expert, crimson, 1.3.5.3
- has 3 floating islands super close to spawn (items from left to right - horseshoe, starfury and balloon)
- jungle on the right, no crimson on the right at all
- dungeon that goes all the way to lava 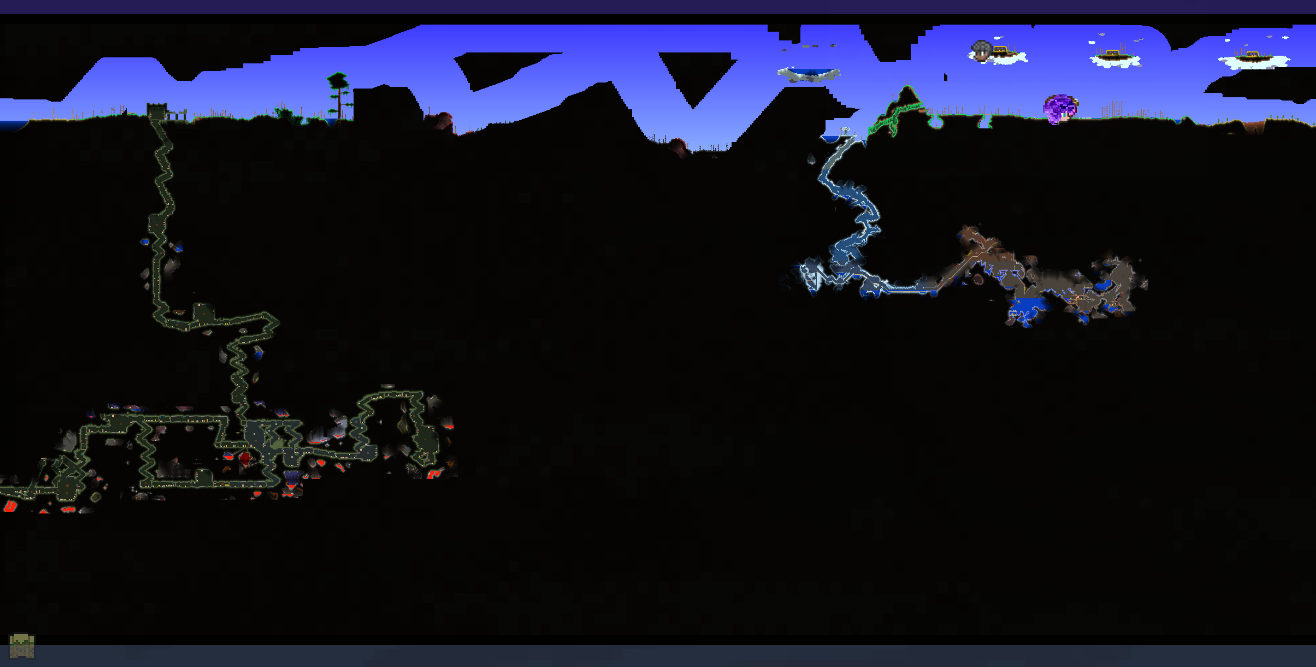