Developer Commentary​
This hotfix patch was in the works before the release went live, so it will not address every issue raised after release but rest assured all your feedback is being taken into account for future hotfixes and patches!

Known issues​
At the current time we are not able to iron out a full list of known fixes and workarounds, but we have a few issues that we want to highlight here that we are working on:

Again we would like to sincerely apologize for any inconvenience but rest assured that we are working around the clock to ensure as many issues are possible are taken care in these initial hotfixes!

We are listening to your feedback and bug reports!
Keep a lookout for a future patch in which we currently hope to address the following in some capacity:

While we expect to address all of the above as soon as possible, we do have more plans for fixing the issues that are being highlighted by the community. However, we are not able to share more details at this time, as we’re trying to investigate and fix as many as we can so there will be more hotfixes coming as needed!

We would all like to thank you for your patience and understanding as we hope this will be the start of a great journey so our most sincere apologies for any issues you’re encountering!
Last edited by a moderator: Aug 29, 2019

​
Developer Commentary​
Hello everyone! We’re happy to let you all know a new hotfix has been released for Terraria Mobile 1.3! In this hotfix you will find not only the usual suite of key fixes for common issues that have been identified post release, but also a handful of new control options - again, based on community feedback. Bear with us in our quest to get you updates as fast as possible, we are not able to fix everything in a single hotfix, but be at ease knowing more are coming as needed!

Again we would like to apologize for any issues that you’ve encountered and we want to thank you for all your feedback, reports and patience!

We are all extremely excited for the future and what is coming after these hotfixes - so if you’re not interested in the changes in this log, we have big plans to share once the launch fixes are done and things stabilize. This will include highly-demanded features such as controller support and more customization options!

Known Issues​
As before, we wanted to share a handful of known issues that remain in this current build This is not meant to be an exhaustive list, but rather a selection of issues we would like to highlight, some with known workarounds:

IOS - BACKING UP AND RESTORING PLAYERS/WORLDS​

​
Developer Commentary​
Hello everyone! In this smaller than usual hotfix we focused on a series of Android specific issues that were preventing players on the new version of the OS to play the game, and some key issues in gameplay that happened after Hotfix 2. While this update doesn’t contain a number of fixes for crashes/performance that have been reported, we didn’t want to hold back on fixes on other serious issues that were raised from the community.


As a result of this Android focus, coupled with an unfortunate delay in the iOS build, we will be releasing 1.3.0.7.3 today for Android only. ​
iOS should now have access to 1.3.0.7.3 (9/17/19) ​
Given that the bulk of the major issues covered with this hotfix are on Android only, the team felt it would be wise to go ahead and get this out now even though iOS is not yet ready. The delay should only be a few days, and then both platforms will be back on track, with both on 1.3.0.7.3. The team is planning to have the 1.3.0.7.4 hotfix in testing most of next week, as it contains some bigger "behind the scenes" changes that will need a bit longer to check out.


The team is hoping that 1.3.0.7.4 will get us close if not there in regards to having the launch build in a nice, stable place so that work can begin on our first post-launch update: the Customization and Controller Support Feature Update!

That said, rest assured that we’re hard at work to improve the performance and crashes and other hotfixes are coming as necessary!

​
Developer Commentary​
Hello everyone! This is just a tiny hotfix for android only to adjust an issue with the Google Play License check, nothing else is changing and the patch will be for Android only as it is not an issue that affects iOS devices!


That said 1.3.0.7.5 is still very much underway will contain all previously scheduled fixes on both iOS and Android as expected!​

We are approaching what we hope will be the end of our post-launch hotfix waves for the launch of Terraria Mobile 1.3 - so we hope that everyone has enjoyed this version of Terraria thus far... and that you have also appreciated what fixes and changes we have been able to add in the handful of hotfix waves to-date. 1.3.0.7.5 brings some pretty important new features to bear that we think will help sort out some of the stability issues that low-end device players have been experiencing. We also took the time to add an indicator for Hard Mode transition progress - so you will no longer have to wonder if your game has stopped progressing and can get a sense for just how much longer you have to wait before you can get to smashing altars and collecting those new ores!

Of course, we have the usual array of fixes in place here - so be sure to take a look at the full list below for any bugs that have been... bugging you.

If all goes well, this may be our last hotfix before we move on to the next feature update - focused on Controller Support and Control Customization!

We have also submitted 1.3.0.7.5 to Amazon for approval, so Amazon players should be on Terraria Mobile 1.3 soon!
NOTE: Please check the Amazon minimum specifications below to see if your device is eligible for the update.

Amazon Minimum Specifications​
Amazon minimum specifications will be similar to what is supported on Android (OpenGL 3.0, 1gb of available RAM, etc.). However, given the limited number of available Amazon devices, we were able to list out the entire set of supported Amazon devices in the spoiler below. If your device is not on this list, you will not be able to receive the Terraria 1.3 update. However, your existing Terraria 1.2 version will remain fully functional as it is now.


To find which model you have, go to Settings > Device Options > Device Model 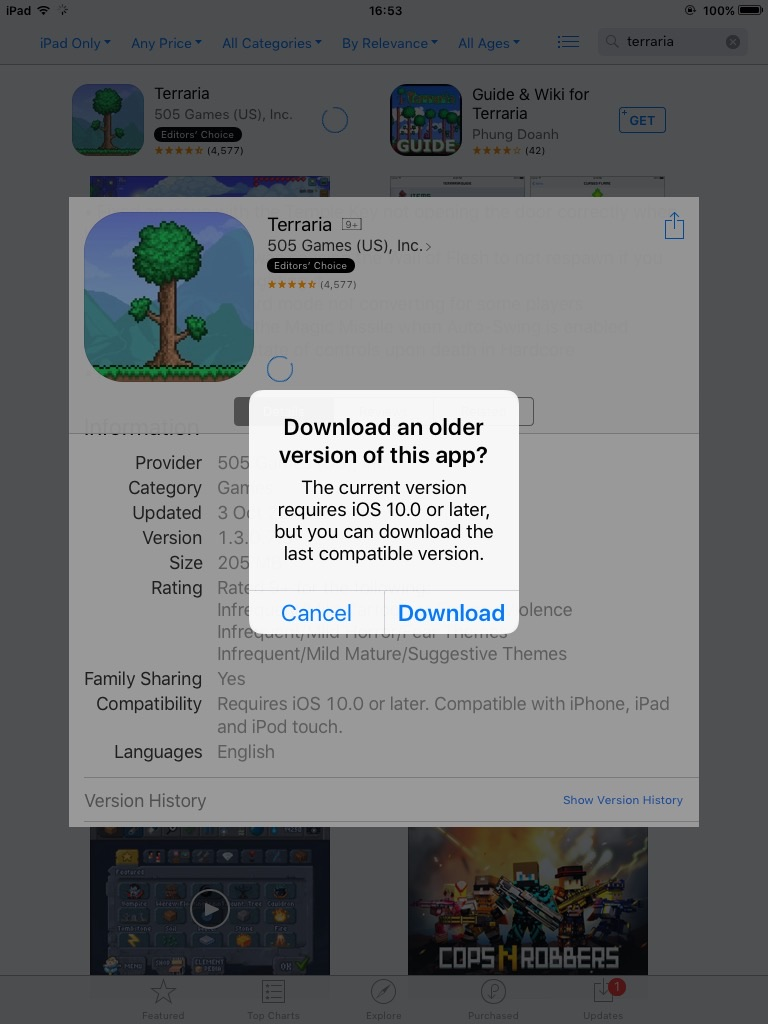 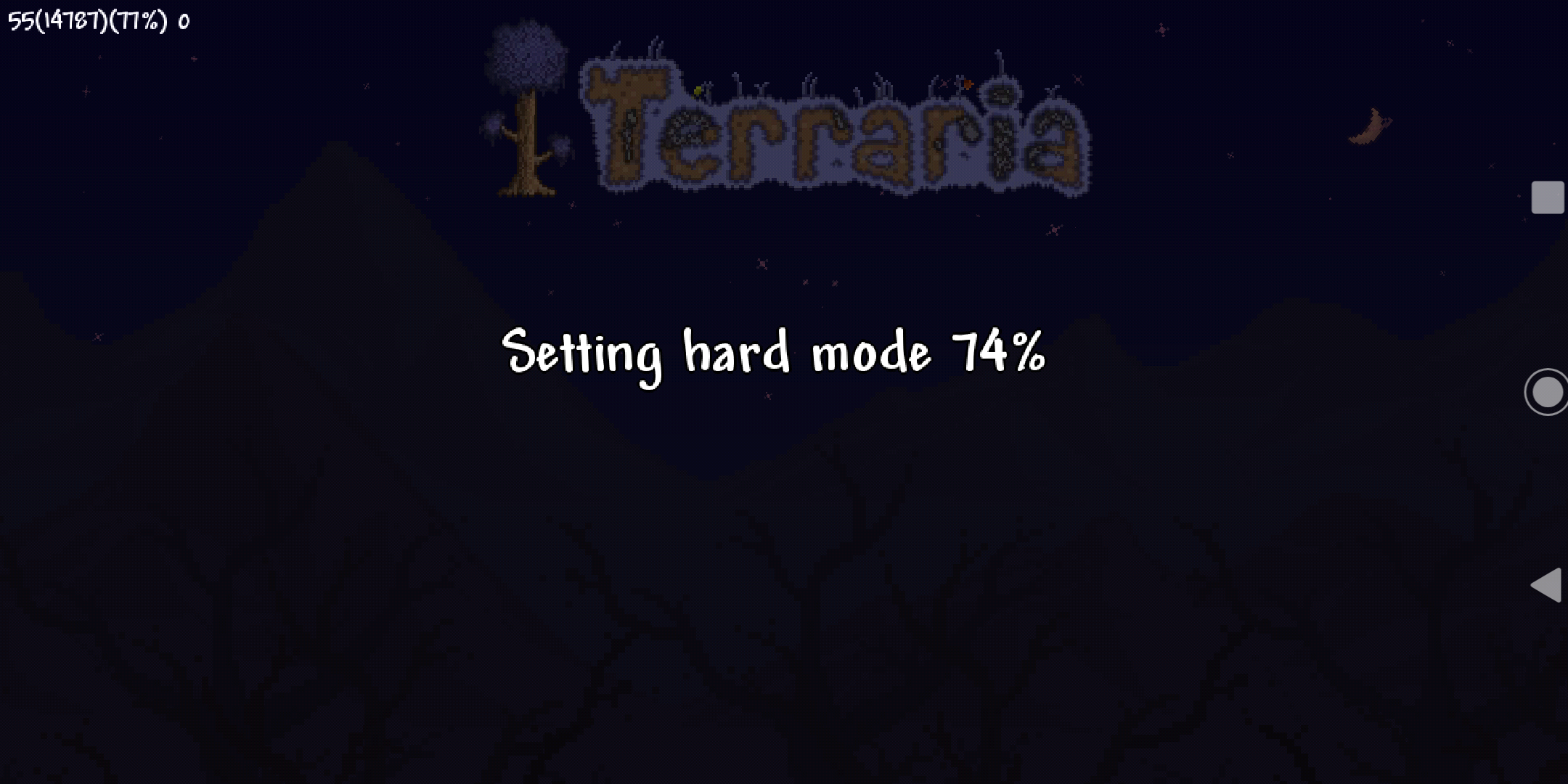 Terraria Mobile 1.3.0.7.5 requires a new version of the Dedicated Terraria Mobile Server for PC (for anyone hosting an online mobile server via their PC). You can obtain the latest version by following the link below, or checking out the front page of Terraria.org.

Developer Commentary​
Hello everyone! We got a new hotfix ready to address some of the latest pressing issues, while we'll be still on the lookout for additional fixes, we're going to shift gear and start focusing more intensely on the next feature update: controller and customisation! I hope you're excited as we are and we can't wait to share additional info as we're ready!

FAQ​
If you wish to check a more comprehensive list please refer to previous FAQ entries in previous posts!

Developer Commentary​
Hello everyone! We were made aware of a handful of issues with yesterday's 1.3.0.7.6 update - so the team has been hard at work since last night in order to get a quick turnaround hotfix to you today for these issues. Android should be available now, with iOS/Amazon to follow as well as Android for players that bought Terraria through the Free Trial app prior to 1.3. As these issues primarily impacted Android devices, we did not want to hold back on getting the fixes out to Android ASAP.

We will get the other platforms out as quickly as possible, but the review/submission timelines there are longer than on Android.