Welcome to the the latest Terraria community update on development progress across all active platforms! Summer is really starting to heat up - and so is the news across every platform for Terraria. Read on below to uncover the latest and greatest information around the Terraria universe!

PlayStation 4 & XBOX ONE - PIPEWORKS​
After the release of 1.3.1 our focus shifted toward patching bugs that emerged after the release of the update. In response, we released two set of hotfixes. You can find more information about what was included in those patches here.

The team has also been hard at work on content conversion, and some fun features like water distortion. We don’t have an ETA yet on when the next content update will be available, but we’ll make sure to share additional progress as it becomes available.

We also wanted to give a big shout out to Re-Logic for the announcement of their 1.4 patch! As fans of Terraria we’re as excited as you are to see what comes next!

SWITCH - PIPEWORKS​
Next, let's look at a quick update on Switch. For starters, we wanted to make sure that everyone had a chance to check out the Switch Showcase Collection that we put together and posted here on TCF just a little while ago. This is where we will keep the videos that we have produced around Switch, each showing off a different aspect of Terraria on this platform. Click the link below to give these a view!


Nintendo Switch Showcase Collection​
By way of further updates, we’ve gone through some intense multiplayer testing with Loki and Food Barbarian from Re-Logic; trying to push the game to its limits. This includes doing things like summoning a bunch of bosses at once with a trap arena running - during a Pumpkin Moon. Fun times! This effort has been aimed at isolating areas where improvements can be made to performance.

Our remaining tasks before launch have been focused on cleaning up the code, and resolving feedback sent over by Re-Logic. Things are very close to being wrapped up, and the game should be out in your hands soon. Once we have a definitive date and time for launch, we’ll let you know.

We had really hoped to have things fully to the Beta stage (for the lucky few that get selected... and no, those selections have not happened yet) by now, but getting multiplayer into the state that we want in regards to performance and stability has been a trickier path than we had hoped. That said, we are making amazing progress there, and we cannot wait to be able to show off some of what we have in store for that aspect of the game very soon.

Changing topics, there have been many questions about how the game now feels on tablet, and recently we’ve made some major improvements to how the game plays on these larger devices.


The biggest challenge when designing a game that is intended to be played on both phones and tablets is the wide variety of screen sizes that are available and that you have to plan for. Tablets (and phones for that matter) can be different shapes, have bigger edges, and then tablets are typically heavier with bulkier covers. With tablets especially, even just how you grip the device or the size of your fingers can definitely impact how comfortable is to play!


While we could’ve just created a default that works for most and stopped there (and it is certainly important to get the default as good as possible), we decided to go the extra mile here. We hope that you’ll be happy to hear that we have already added functionality that will allow you to be able to move some parts of the interface - for both tablets and phones! 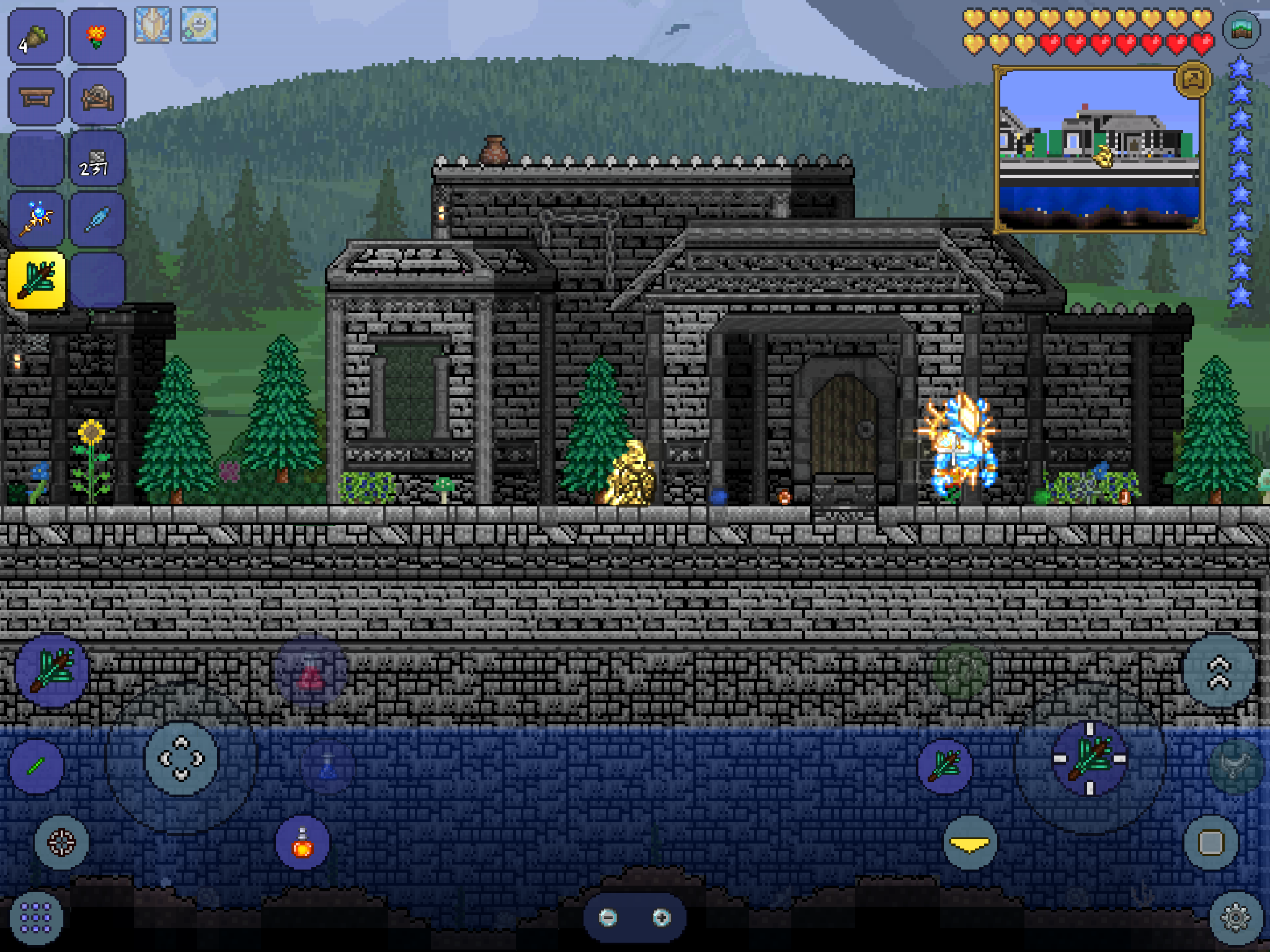 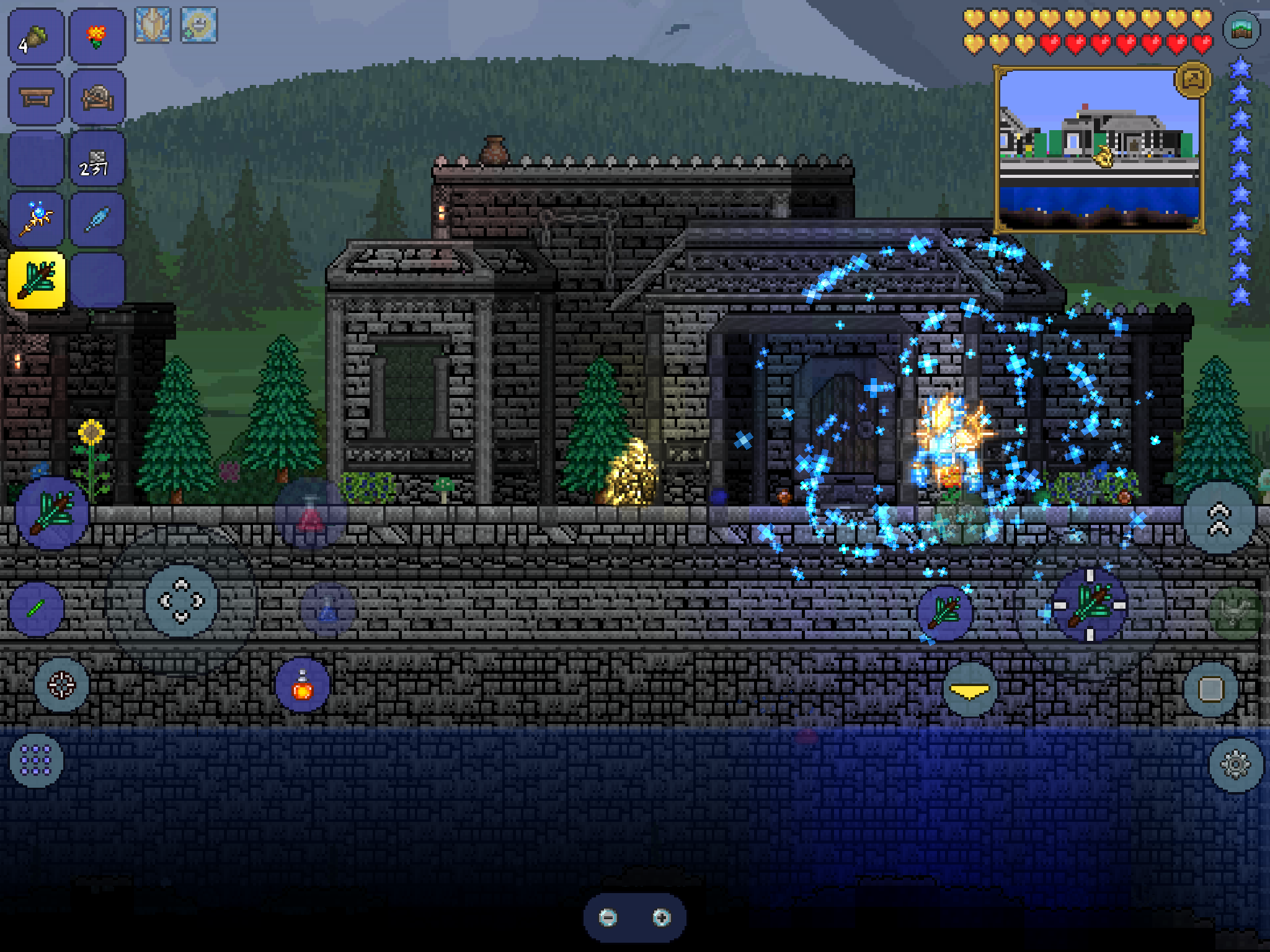 Thanks to @Saint2th for the worlds on which to display this feature. ​
The images above are intended to just be a very basic display of this functionality (note how the controls are higher/lower) and not necessarily what we envision as the final version. This is still very much a work in progress - and as such, we cannot share too many details until everything all settled and confirmed - but we wanted to let you know that we’re taking extra care to make sure that playing on any device will be as comfortable and accessible as possible!

That said we cannot wait to share with you the details on what these changes are and we hope you stay tuned to hear more!

PC - RE-LOGIC
​
Whew, what a June so far, right!? As you can tell from our teaser in last month's update, the Re-Logic team have had their hands full getting ready for the big reveal at E3's PC Gaming Show... Terraria: Journey's End!

What's that you say? You missed the big news? Well, allow us to correct that right away!


You can also read a ton more about Journey's End on our official announcement post linked HERE - including a brief FAQ that should cover your most pressing concerns.


Progress on Journey's End is going really well - the team has a TON left to get into the game, get tested, and get just right before releasing it to everyone later this year if all goes to plan. We will look to share more juicy details in the months ahead on the road to launch - so stay tuned!

COMMUNITY
​
Hello Terrarians! We hope you are ready for an incredible Summer! There is so much to go over, so let's just jump right in.

We want to start with a shout out to our Twitter for reaching 200k followers, our Reddit for reaching 200k subscribers, and our Steam for being the second game in history to have over 200k reviews while maintaining Overwhelmingly Positive status!

Over the last few months the Terraria Community Team has been forging some truly majestic creations for everyone to enjoy. We are hyped to announce that the Event Party Girl Bot is officially out of Beta and available live for the entire Terraria community. With this event bot we now have official Terraria events daily! We are talking at least one official event 365 days a year. The winners of these events will earn prize points that can be redeemed in our prize shop for Terraria apparel, Steam games, and so much more. If you are looking for more details then come check out the #events-announcement channel at Discord.gg/Terraria and show us what you got! You also have to test your Terraria knowledge against our Trivia Guide Bot for prizes.

The Terraria community is looking to spread across all biomes and languages! There is so much amazing Terraria content created daily, but most of it is in English, leaving those who only speak non-English languages left out. The dream is to have Terraria community hubs in every major language and social network. We are going to begin working with the biggest content creators in Terraria to translate and share their content, with the rest of the world, across localized networks. We are also looking for Terrarians who are fluent in a second language, who are interested in joining the Terraria Community Team and helping out as a moderator. Furthermore, the Terraria Switch release is right around the corner and we decided to build out our console moderation teams. We are looking for passionate members of our community who love to help their fellow Terrarians and are interested in becoming community moderators. If this sounds interesting to you then fill out the application @ Terraria Community Team Application Form and help us build the greatest gaming community in the world!

This Summer we are planning to role out some really cool community features including:

- Terraria University - a series of tutorial videos that will help both beginner and expert Terrarians.

- Epic Battle Dryad Bot - A new activity bot so epic it will blow your mind! We will announce further details and a Beta soon.

- Weekly AMA - Each week we will give the community the opportunity to chat with one of the Terraria developers or popular content creators. Expect wild questions and hilarious reactions.

The Terraria community will not be as fun without you, so come join us on this Summer adventure!
Last edited: Jun 20, 2019

I cannot hold all that hype i'm carrying!

I play terraria on my Samsung Galaxy Tab A 10.1, it runs flawlessly. Super hyped for the new mobile update.......

Looking forward to the upcoming mobile update as well as the great strides and efforts the Terraria Community Team are making to improve our excellent community even further.

Thanks for the shout out too! Haha 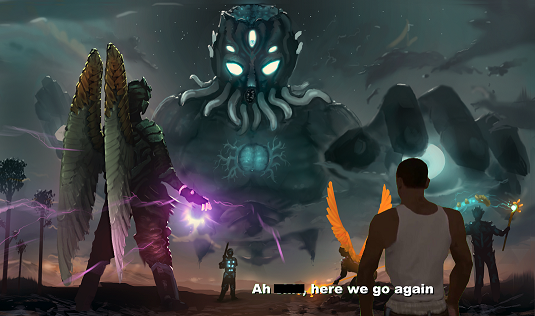 Glad to see you guys still hard at it. Stay golden!

So excited to hear the Switch version is just around the corner. Will be looking forward to getting it day one.
T

Why does nobody care about this block

I'm so hyped for the mobile 1.3 version and I'm glad that the beta update is coming soon...
Thank you developers of Terraria for doing your best to port the Terraria 1.3 version to mobile and consoles as quick as you guys can.

I’ve gotta say: mobile is looking pretty interesting! I don’t really play it that much, but maybe I’ll mess around with it more once this update rolls out.
And yes, we’re always happy to have more members of the community team! The more the merrier!

Very happy to hear that the Switch version will be close to launch! Keep up the good work

I have a question. Will you be able to turn off blood and gore on the Switch (and eventually mobile) like on the PC? Im just curious.

Quackinton said:
I have a question. Will you be able to turn off blood and gore on the Switch (and eventually mobile) like on the PC? Im just curious.
Click to expand...

What is not to understand about “Everything on pc 1.3.0 will be on mobile and switch, and previously, console”

then i would absolutely love moving mana and health, so we can put a specific heart somewhere like in the middle, or next to the joystick, so we know exactly when to quick heal

God I cannot wait for new blocks!
So many ideas of what to build...

GalaxyShard said:
What is not to understand about “Everything on pc 1.3.0 will be on mobile and switch, and previously, console”

then i would absolutely love moving mana and health, so we can put a specific heart somewhere like in the middle, or next to the joystick, so we know exactly when to quick heal
Click to expand...

I can see your reasoning. I know everything from 1.3 on PC won’t be on mobile right away, (or not at all) but I was just wondering if that feature will come out on mobile when 1.3 launches or later after that.