when I was playing the calamity mod with my friends, we managed to kill Providence in death mode. it was a lot of work, but if one of us died, the others would play defensively until we got back to the arena. our hard work REALLY paid off!!

I went through almost the entire game with one person. i miss the memories

I have had the exact same partner to play terraria modded everyday since around like 2017 march, I still play with him, everyday we would just wake up early and just hop on discord and start chatting and then playing, we have finished calamity, tremor, 6 vanilla games and uhhh..i forgot.

Ah, how I've missed this thread. Just looking at it takes me back! Fond memories all around! I love it! I really do! And yet, I must confess that I can't help but feel that... perhaps there are more fond memories to share?

Yes, with Journey's End having been out for going on eight months now, I figure it's about time I brought this thread back from the dead! After all, we've all had more than enough time to have a new adventure (or two) with our friends, right? Especially in these crazy times. So, share! Share away! I can't wait to hear what you and your friends have been up to in these wild times!

And, yeah. I suppose I can break the ice once more. I've had a few new adventures myself! But where to begin... Oh, I think I know where to start! Let's start with...

Multiplayer Master Mode
Let me open this one with a screenshot so that you can get a general idea of what may have been taking place on this world. 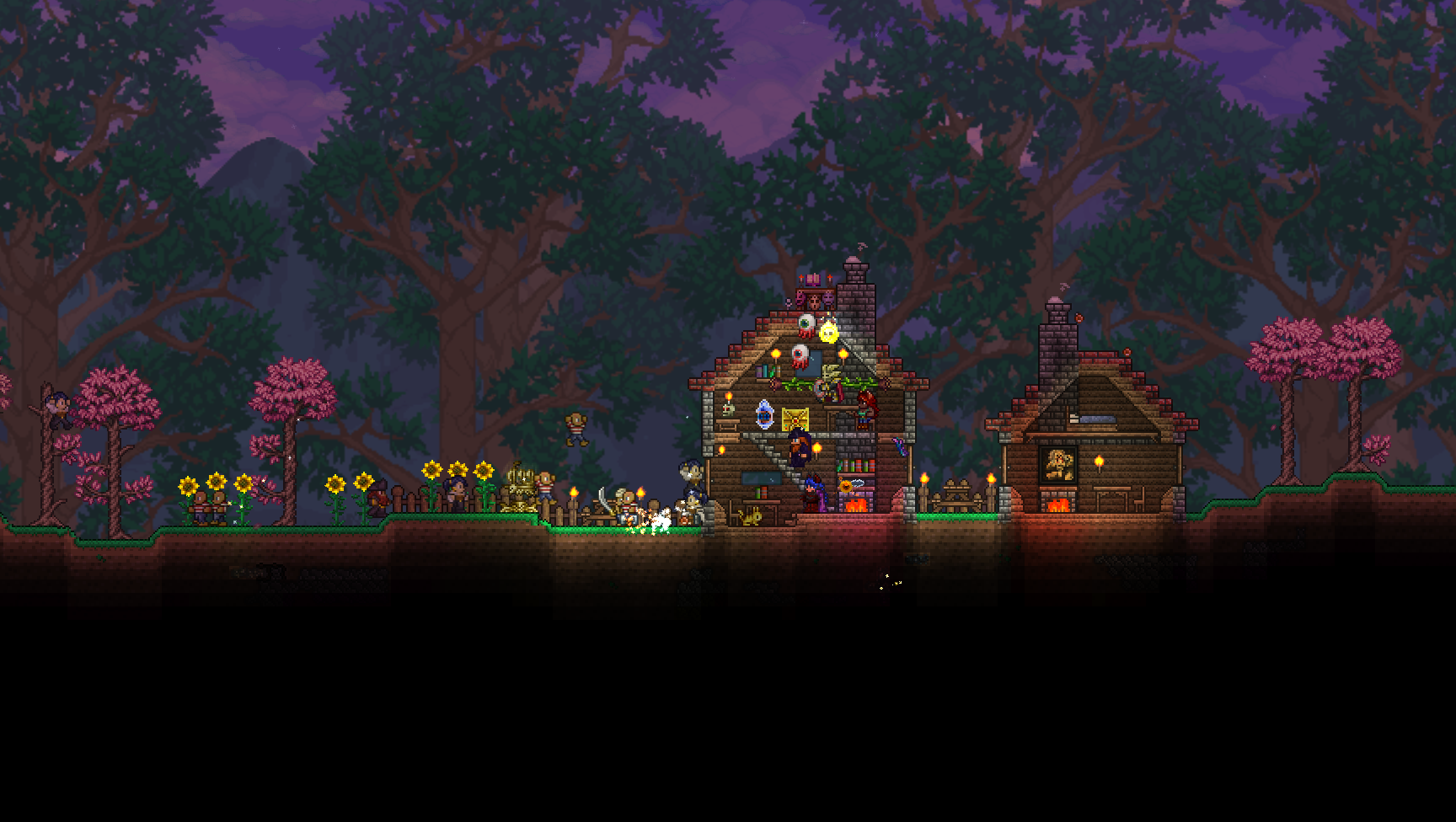 There were four of us- one of whom is not pictured here- on a master master mode world. We had what eventually became one for each class:
Man, that entire playthrough was fun. It took place over the span of about three weeks. So many things that I could share from that playthrough. A few of the little ones:
There are so many more things that I could share, and perhaps I'll even ask those involved what some of their favorite moments were and come back to share them.

And with that, the floor is yours! I'm very excited to hear about the adventures you've had with your friends. Feel free to share moments from vanilla, or even from modded! Whether it was beating a hard boss with your friends, or you trolling the heck out of them. Doesn't matter to me!

Also, here's to the many more adventures we'll have with friends in the future! They may drive us crazy sometimes, but this game does get a whole lot more fun when you have people to share it with!

I have so many stories about my multiplayer runs, but here is one of my favorites:
My current run, a revengeance mode modded run. Here's a screenshot of part of our base and also one that summarizes the chaos this run is: 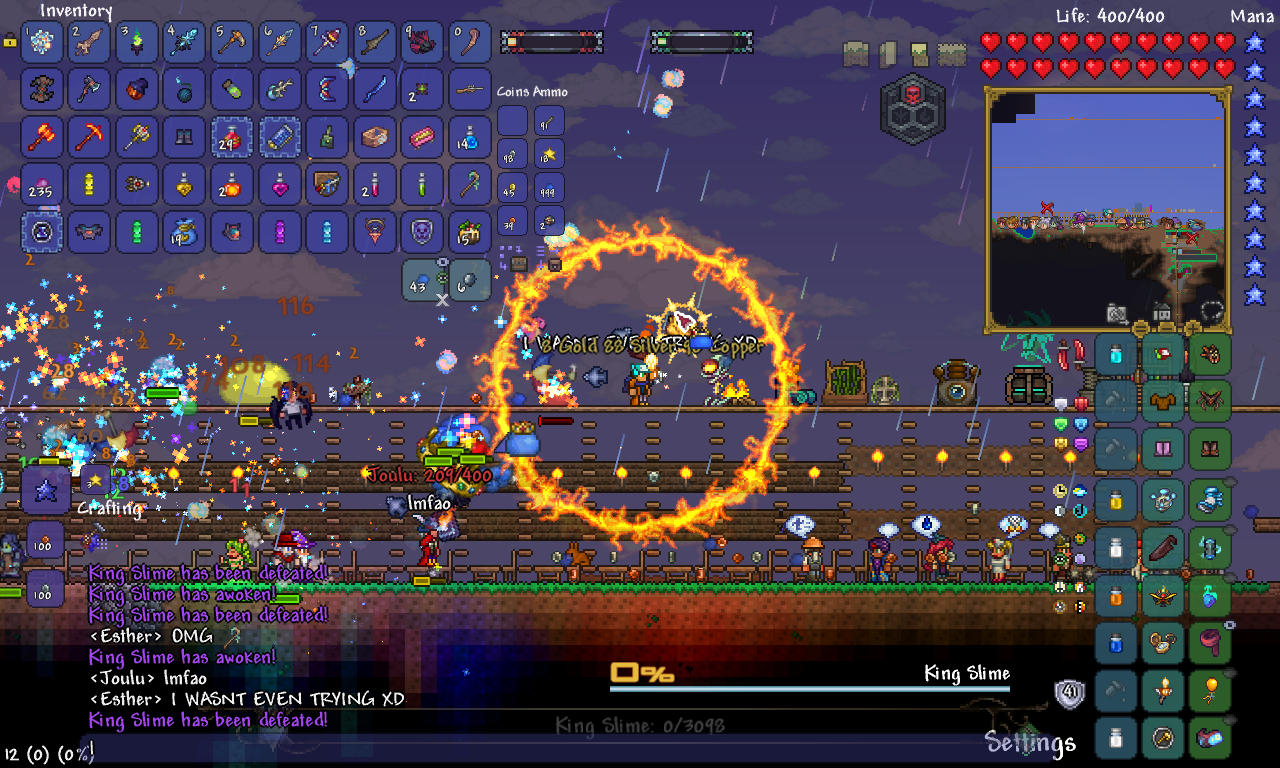 As you can probably guess, I'm the one with the robot hat, standing next to the flameburst tower. I'm the summoner, because it's my best option as I'm very laggy.
The person with the peddler's hat is the other player, and he's the mage.
We just use shoeboxes for NPCs, and the bottom of our arena is also the roof of every shoebox.
At the time I made this screenshot, I was farming King Slime for proficiency, and I had just gotten a Slime Staff and was very surprised about that. The total amount of money I ended up getting was 3 platinum, by the way.

Some other stupid things from this run so far:
-Beating Destroyer first try without dying. I was genuinely afraid of that boss because of how laggy I am. Prismalline spam is a good strategy for me.
-Me randomly making a Hidey-Hole in the corner of our crafting and storage room, then putting a sign there that said "Esther's hidey hole ^"
-I die. A lot. Flying enemies kill me the most, probably, not counting bosses, because flying enemies? For me, with my frameskip on subtle (Which means desync), those things teleport. All. Over. The. Place. And I literally cannot hit them with anything but summons and my Prismalline spam strategy.
-Most of the chat is just: *Item is shown by someone*
The other person: nice

Usually me: brb
The other person: k
Usually me: back
The other person: wb
-Me having a ridiculously bs army following me (My record is 16 herring summons, an elemental in a bottle, eye of the storm, fungal clump, green sign (I think), the Howl's Heart trio, Bunny pet, Solar Bunny light pet, and the third sage, all at once)
And much more. I'll probably talk about my previous runs some other time, but those runs were just as fun as this one is.

That looks like a whole lotta fun. It also sounds pretty chaotic.

Catman Proudly Shows Off His New Toy 2: Electric Boogaloo
The new toy in this case is Zenith. This occurred in the same run I mentioned previously. We worked HARD to get this into my hands, even having to go into other worlds to get some of the swords we needed. We ended up needing to start a Pumpkin Moon because I forgot that you'd needed the Horseman's Blade for it. We got the blade, I crafted Zenith, I gave it a swing, and I fell in love with it. We then finished of the Pumpkin Moon with it. From there, we took this thing to the Frost Moon and got a few screenshots to share with our buddies in Discord. But I think one of the funniest things that happened while I had this thing was Scar's roommate coming in and suggesting to Scar the he kill me and take it off me (when we're not playing mediumcore). My response to this: "You're certainly welcome to try." *enables PvP* You could probably guess about how quickly that fight ended and who won. I don't think I've ever seen anyone die that fast. Not even when I showed off my Terra Blade to my high school Terraria crew.
Last edited: Jan 9, 2021

The Ghost of Dr Bones

I was once playing mediumcore Master Mode Terraria( But no armour and bosses on a server dropped only one loot bag) and no matter how much I begged my teammates wouldn’t give me any stuff to catch up with them because they had been on the server and speedrun most of the game, until they summoned in the Moon Lord and they were beating the Moon Lord with their Meowmeres and other endgame loot while I trailed behind dying until one of my teammates died and dropped their stuff, I could only grab their Zenith before they got back and when the Moon Lord died, I jumped and caught the loot bag then when we were doing all the other bosses before starting a new world I always inexplicable caught the loot bag!

OH LAWD SHE COMIN'
So. New Expert Mode playthrough with two other people. We're refighting Queen Bee to get more gear (After all three of us had gotten a Bee Gun from treasure bags. Thankfully, I'm playing mage this time. So it wasn't entirely useless!). It goes poorly, and all three of us end up dying. That oughta be the end of it, right? Wrong. Because, by the time the third had died, the first had respawned. And... Here she comes. All the way from the jungle arena we had all died in to our home base. Cue the panic, and the title of this particular post. That's when the three of us got introduced to Enraged Queen Bee, who mopped the floor with all three of us.

that one time when me and friend beat EoL daytime and clearing out the solar pillar. its such a pain but its feels so good for being able to finally make solar weapons and getting terraprisma for my summoner main friend
You must log in or register to reply here.
Share:
Facebook Twitter Reddit Pinterest Tumblr WhatsApp Email Share Link
Top Bottom