In Terraria 1.4 the physics of dropped sand and coin tiles were changed to be more realistic. They no longer get caught by otherwise non-solid tiles. (This is a pretty nice change btw, it makes working with them a lot easier, at least in theory.) The changes however also resulted in them doing unexpected things in some situations.

When the tile below a coin pile is actuated, the coin will correctly turn into a projectile and fall through. However, the same doesn't happen when opening a trap door.

(This is not a very high impact problem, I just though it was weird.)

A slightly bigger issue is that falling coin piles also pass through other coin piles. This means that breaking a tower of coins will result in all coins above the broken one to fall to the ground. Placing down coin stacks is also a bit more tedious now, since you have to go from the bottom up.

I would say this issue is quite severe, as it completely breaks mechanisms used for dropping a single coin. These were pretty useful for adventure maps. 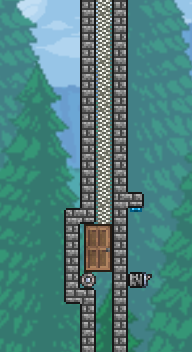 Other than the fact that doors can't stop falling coins now, it's also impossible to stop the whole tower from turning into items, once it starts falling.
I would expect coins to behave more like sand/silt/slush in this scenario, with the tower dropping one tile, and remaining intact.
You must log in or register to reply here.
Share:
Facebook Twitter Reddit Pinterest Tumblr WhatsApp Email Link
Top Bottom