actually it seems like luck dosn't do anything? i have around 30 luck and the reforges don't seem any better than they did with no luck (using the cubes that have garented 4 slots and +25% bonus)
edit
so far i've seen only +1 on accessorizes (i've seen 3 +1's on an item but only x# of +1)
i've seen +2 on armor (i've seen 3+2's but only x# of +2's i don't think i've seen +1 on armor so far or a +3) the original post shows +8 and +9 but idk how to get these luck levels. at first i thought i would get stronger modifiers if i had more luck ex if i had 30 luck i would start seing mostly +2's and +3's for luck while if i had 50 i would start seing mostly +3's and 4's also i looked for a congif to turn rounding to the 2n'd didgit but it was not in the folder nor in the mod config menu avalaible from in game

edit 3. your discord link does not work 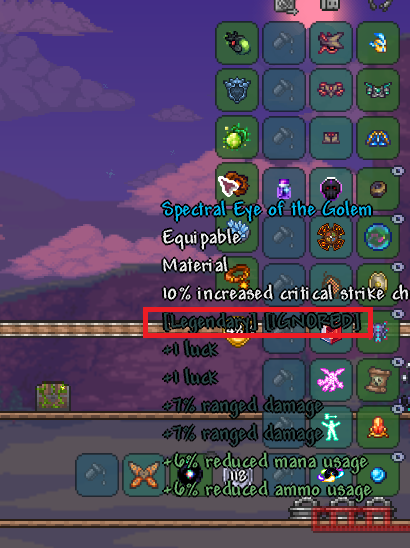 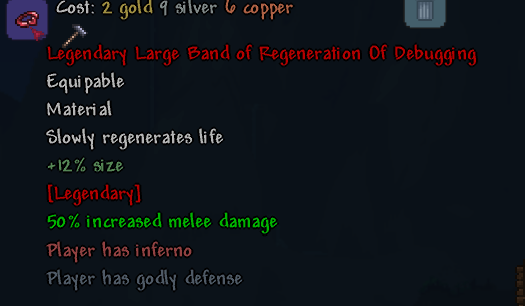 this is the image from op i have seen no modifiers nearly this strong and yeah it says "of debugging" but i don't see why the op would show us a modifier way above what is possible. also in the gif in the op their are 30+% items where i'm seeing 15% on the high end. i guess i could install antisocial (i don't remember if anti social is for armor or accessories but ik their are mods for both) and increase my luck by a lot more but given that i'm not seeing a difference when i'm at 40 i'm not expecting suddenly a big difference at 78 luck
Last edited: Jun 19, 2020
M

Do you plan on adding a cube for testing purpose that let us set the prefix we want ?
L

I just see that it's been 1 year since this mod get any update, did the dev just (for the second time) stop working on it ??

I have noticed that I also can't use the cubes anymore... I know that the control button works, and so does the right click on my mouse. But I just can't seem to use the boxes AT ALL!

Does anyone have any advice for this? Maybe it happened to you too? And if so, did you get around that, how?
Thanks in advance, I really like this mod, but if it starts acting up I would be quite sad...

Edit: I found out how to fix this error. You just have to reload your mods, and log into a new world. Be sure to take your cubes with you so that you can use them right away, because as soon as you spawn in, you can use the cubes without any problem what so ever.
Last edited: Aug 2, 2020

So, I just wanted to make a small complaint about this mod
It is very annoying to start with this kind of extra modifier in the tools, I try to mine in early-game (I have a mod that gives me iron tools as soon as I create a character), and I mean, if you guys could try to change some modifiers in only the TOOLS, it is somewhat annoying that out of nowhere my pickaxe stops when I am mining to try to escape or try to get a mineral that is far away, just that, thanks I guess 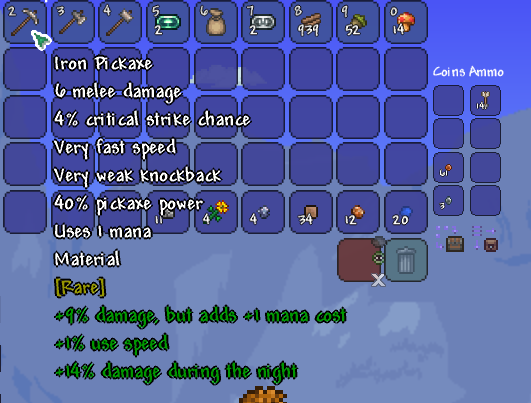 My game has been lagging a lot playing with friends on multiplayer and I had to manually separate my mods one by one to find out... and it turns out this mod was causing the issue. Playing single player was completely fine, I had zero issue. It was only online and only when I hit enemies that I would lag. It would also only be me who's having the lag as well... At first I assume it was because my gaming laptop wasn't strong enough to handle the modded game... but then why would it work flawlessly on single player? If it was a server issue, why was it only me? The game would freeze for a second or so when I hit an enemy, bosses would literally freeze my game until it dies. After I've separated this mod from my game, the lag was gone. I can only assume the lag was cause by the amount of bonus everyone had, calculated when hitting an enemy. Doesn't help when every player in the game have mods that gives 2 extra accessories and anti-social. That's a lot of bonus. But then again, who knows. I still don't know why exactly this mod was causing it, maybe it could just simply be that it was not compatible with another mod.. like leveled mod or wing slot.
Last edited: Sep 11, 2020
You must log in or register to reply here.
Share:
Facebook Twitter Reddit Pinterest Tumblr WhatsApp Email Link
Top Bottom