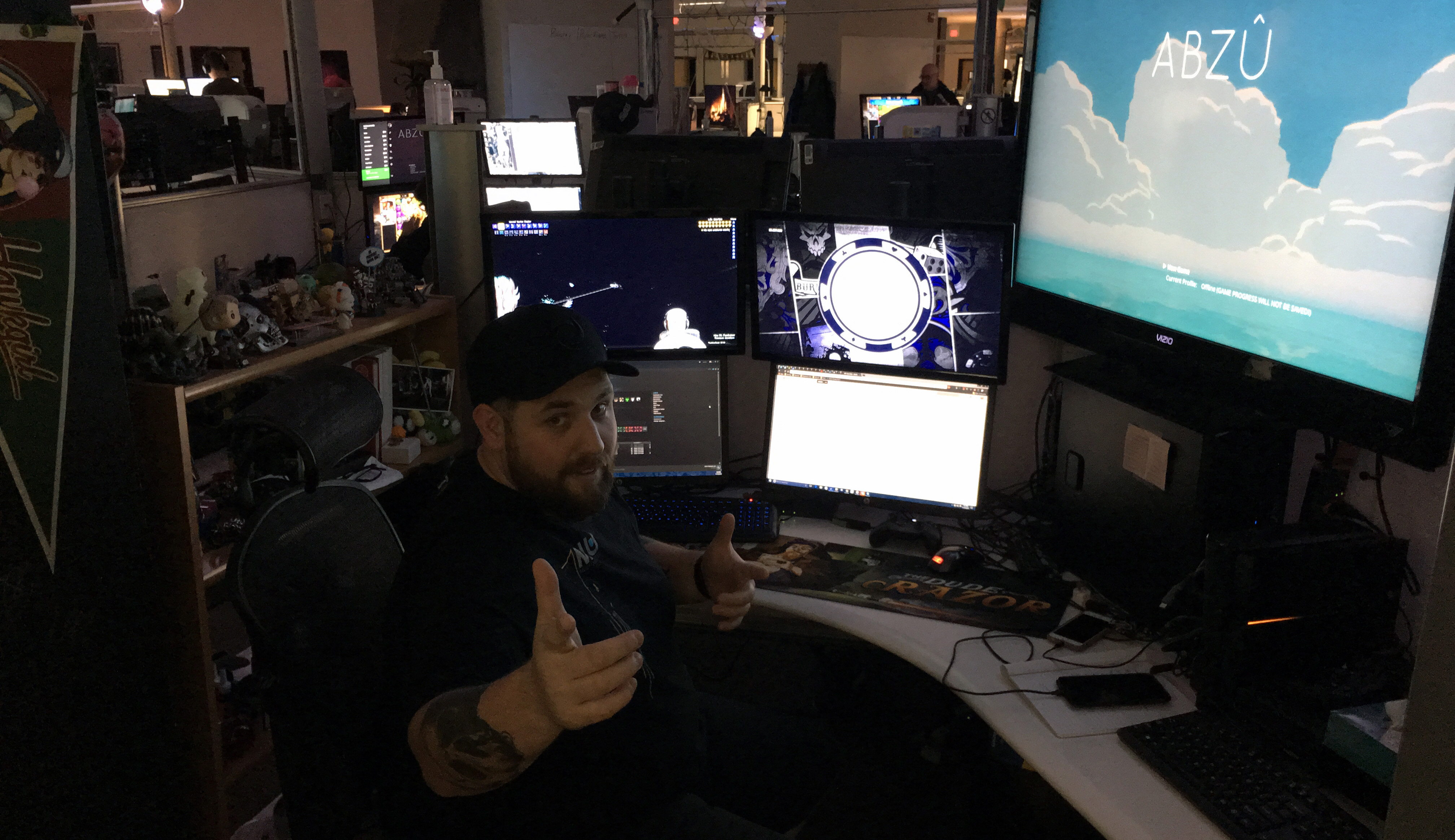 Meet the Team is a regular feature in which we interview members of the Pipeworks team working on Terraria to give you a brief introduction to the people working behind the scenes to maintain and improve your favorite game. Today, our subject is Marc Rodriguez, QA Manager.

Oh, you know, a bunch of AAA games like Saints Row & Red Faction. I used to work at Volition Inc. (THQ); Got to work on a ton of THQ games too. Way too many to list! Same thing now, working with 505 Games & Pipeworks Studio, I’ve stopped tracking the list of titles under my belt. Most prominent are the original 505 Games console releases of Terraria, and our newly released Prominence Poker.

I’m the one that makes sure my team (QA) and those that get promoted, have four monitors. I’m the un-biased person to check everything against. I’m the QA Moon Lord.

YOU! Seriously. Because you love this game so much, I want to help exceed your expectations. Even if it means getting into nerf battles with developers, I’ll have your back.

I’ll make sure Richard Liebing stays off of Reddit long enough to work on the UI.

Staff member
Moderator
By now I'm pretty sure we can map the monitor hierarchy that goes on within Pipework's walls.

Pleased to meet you, sir Dude!


ClearConscious said:
I’m the one that makes sure my team (QA) and those that get promoted, have four monitors.
Click to expand...

Everyone gets 4 monitors now, but poor Sarge can't even have a proper desk and chair.

Staff member
Re-Logic
I'm from Il as well @Izzabelle, Bloomington and Lexington specifically I like Meet the Team, because I end up learning more about everyone else too!

Safeman said:
I'm from Il as well @Izzabelle, Bloomington and Lexington specifically I like Meet the Team, because I end up learning more about everyone else too!
Click to expand...

You can find my roots in Joliet, Shorewood, and Plainfield!

Staff member
Administrator
Hi Dude, I'm very pleased to hear that you take care of your team and their monitor needs so efficiently. This bodes well for us.

why is everyone working on the "ui" stuff? at this rate, no progress will be made ;-;

InstaFiz said:
why is everyone working on the "ui" stuff? at this rate, no progress will be made ;-;
Click to expand...

First of all, only Richard. Wesley and two other as of yet unknown team members are known to work on the UI, apart from Nicholas who is now working on backwards compatibility and says he will be joining the UI team. So that makes four members, including the Lead Engineer (so Nicholas, Eric, Matt and David), to work on other things, together with an unknown amount of other programmers. Maybe they just started the series with the UI engineers?

Secondly, don't underestimate the importance of the UI. Not only is it everything but straightforward to convert that from XNA to Unity (granted, most stuff isn't), but bear in mind they have to make a different, functional, and above all, user-friendly UI for not just both console and mobile (the PC UI doesn't work well on console, and vice versa), but for individual units of each platforms (e.g. accommodate for different screen sizes). It's a very intensive task, not only in terms of code but also design.
You must log in or register to reply here.
Share:
Facebook Twitter Reddit Pinterest Tumblr WhatsApp Email Link
Top Bottom